Mac Miller was supposed to perform in Milwaukee this month. Sadly, the rapper and producer died in September as a result of an accidental drug overdose. He was only 26 years old. On November 30—the very same night Miller was scheduled to perform at The Rave—a group of Milwaukee musicians will honor the departed musician with a Mac Miller Tribute Show at Company Brewing that was spearheaded by local rapper and multi-instrumentalist Will Rose.

Joining Rose (who performs under the name Airo Kwil) in paying tribute is an eclectic cast of emcees, including Nile, Shle Berry, and Moses. The show is also a Freespace benefit for The New State. Prior to Friday night’s tribute, Rose told Milwaukee Record what Miller meant to him, how the unique show came together, the importance of all-ages venues, and why he’s shedding his Airo Kwil moniker after this event to focus making music under his own name.

Milwaukee Record: Let’s start with this. Why are you doing a Mac Miller tribute show? What did—or does—he mean to you?

Will Rose: I wanted to put together an event to celebrate the life of an artist who has impacted myself and so many others. I’ve heard this from a lot of people, and it’s true of myself, that Mac’s death really felt like losing a close friend. I went through an intense grieving process that totally blindsided me. I hadn’t experienced that with the loss of the other influential musicians in recent memory. I think it has to do with the fact that his progression and maturation closely reflected my own, and with the similarity in our age, and just his being such a warm person.

Personally, I’ve dealt with a lot of the same demons that seemed to plague Mac, issues with depression and substance abuse, and so to see someone so successful and vibrant succumb to those problems at a young age was heartbreaking. I feel like that could’ve been me, and I’ve seen it happen to others. It makes me want to celebrate and appreciate life every day.

As a musician, he seemed to be heading in such a wonderful direction, he’d come such a long way from the early stuff. For me, Watching Movies With The Sound Off was the record that made me realize he was for real, that he was an artist with insane creativity and potential. Swimming seemed to capitalize on that potential more successfully and honestly than anything else of his, and his use of live instrumentation within hip-hop is something that resonates very strongly with me. It makes me want to create. Mac was an important and deeply beloved artist, so I wanted to stage an event for fans and admirers of his to celebrate that. And the response has already been very positive.

MR: You have an impressive group of other rappers helping you with this. How did you get them to agree to be part of this? Or was the chance to honor Mac an easy thing to sell?

WR: Well, it was definitely an easy sell. I talked with Sam [Ahmed] (WebsterX) about the idea for the event. He threw out some names, and mentioned that Nile was a big fan of Mac Miller’s. Nile really is a perfect fit and it’s a blessing for him to be involved. He’s someone who’s making waves within the Milwaukee music community right now. Shle Berry is somebody whose talent and rise has definitely caught my attention as well, and an artist who really stands out in the city, so it’s amazing to have her involved. I also have to send a huge thank you to Janice from Freespace for helping me to organize this event and reach out to artists, and also for making a really beautiful flyer. It wouldn’t have come together as well as it has without her help.

MR: Without giving away too much, can you talk about the cypher? What can we expect from the tribute set?

WR: We’ll be more closely covering a few Mac Miller tunes—generally more singsong pieces that better lend themselves to being covered. Then we’ll be interpreting a number of instrumentals that he either rapped over or produced, and that’s where the cypher element comes into play. We have some notable guest emcees joining us for this portion, and Nile—who will also perform his own set—will join us for a song. The tribute set will play out as a celebration of hip-hop and of Mac Miller. It should be a festive spectacle, somewhat free-form but still concise. Mac’s catalog was super deep, so there’s a huge range of material to draw from, and I’m really excited to perform these covers and interpretations.

MR: This show will be special for another reason. On top of the tribute, it will also mark the end of Airo Kwil. Why are you shedding the identity in favor of your own name?

WR: I’ve performed and written as Airo Kwil, and before that as the name’s origin, Airhythmatic, for almost eight years now. What originally served as an alter-ego that allowed me to push the limits of my creativity and shed the confines of my reality seems more burdensome than it is liberating at this point. Simply put, the monicker no longer serves me.

Moreover, I think I’ve got a pretty cool birth name that I should use for my music. It also injects a bit of excitement and enthusiasm into the creative process that was perhaps lacking, and it gives me something fresh to work towards. It gives me the opportunity to completely take ownership of my creative content.

MR: How do you think Will Rose will differ from Airo Kwil? What are you doing to forge a new path?

WR: The songwriting will be more streamlined and perhaps more directly personal at times. In the past, I’ve gotten pretty esoteric. I’m singing more, but of course, I’m still rapping as well. I’m allowing myself more space, being more intentional, giving the music more room to breathe, and letting the lyrics resonate without trying to cram too many layers into a small area.

I’ve just evolved a lot since I’ve really put out a record or any sort of comprehensive release. Even the final Airo Kwil single that I’m about to drop is well over a year old. Dark Cinema came out at a dark time in my life, and that melancholy lingered for a while after that. My father died a month after I put that record out. Of course that fucked me up for a while. But things get brighter. They always do. Some of it I’m just now getting to a place where I can process and write about and discuss. It’s all very cathartic.

That’s not to say that this is all happy music, not by a long stretch, and I’ll also reserve the creative license to take it in any direction. I will still perform some Airo Kwil songs, and Bo & Airo is still very much a thing. I’m just going to move forward and give myself space to evolve. It’s exciting. I’ve always wanted to be Will Rose.

MR: Finally, we can’t forget that, in addition to being a farewell show of sorts and a tribute, the event on the 30th is also a benefit for The New State. Why do you feel it’s important to support the project?

WR: A charity supporting youth arts education has been set up in Mac’s name in Pittsburgh. I see The New State as having a similar value and mission. The need for an all-ages venue can’t be stressed enough. Without basement shows and all-ages shows in Milwaukee growing up I’d have never gotten into creating and performing music in the way I did. We need to support these types of endeavors if we want to foster future generations of musicians and artists. If you care about music and art, it’s important to remember the kids. 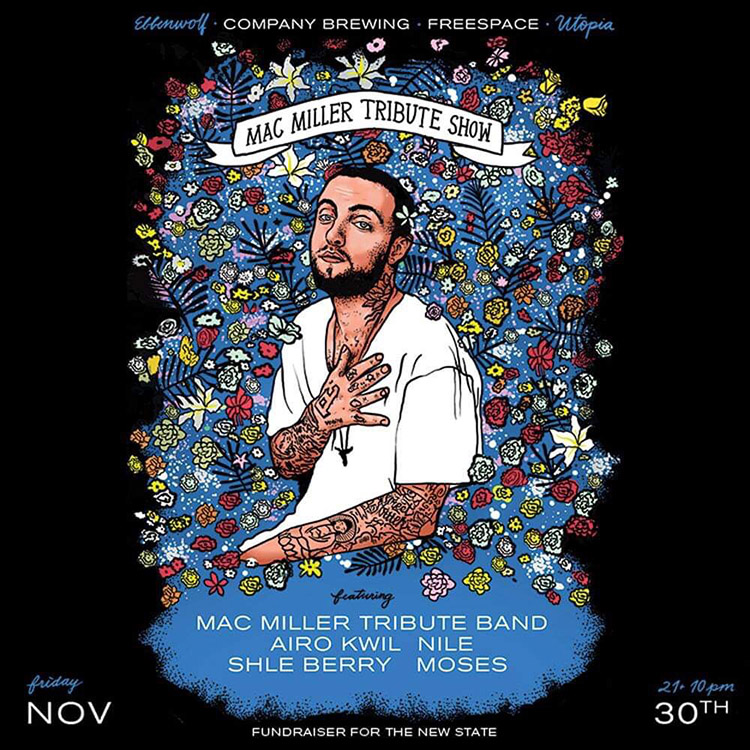