It would be impossible to discuss the last couple of decades of Milwaukee’s experimental music scene without mentioning the name Peter J. Woods. From playing a major role at The Borg Ward to establishing Milwaukee Noise Fest, Woods’ efforts helped build much of the framework for the present experimental music scene. But even the brightest lights sometimes burn out. A few years ago, with local support in a lull, a dejected Woods left to spend a year in Boston.

Upon his return in the summer of 2016, he found a rejuvenated scene that reinvigorated his interest in contributing creative endeavors to the city’s culture. Woods has a mind that’s built for greatness. His approach and insights are often outside the norm, but that’s where the true greats usually lie. Milwaukee Record met up with Woods to discuss his artistic evolution in advance of his show with Bridges Of Konigsberg this Saturday at The Jazz Gallery.

Peter J. Woods: This whole thing started in 2003. I was in a band that sounded like a sloppier version of Radiohead and nowhere near as interesting. At the time, we kind of thought we were a noise band. Ben Turk set up a one-day show called “The Great Milwaukee Ear Fuck.” He threw us on the bill and almost immediately realized we were completely over our heads.

Milwaukee Record: Was Pete-za your first venture into that world or was it meant to be performance art?

PJW: The way that I conceptualized Pete-za was, I always said it was a hardcore band. That was part of the gag. An “ultra minimalist hardcore band” is what I called it. I felt like it had taken on that issue of being completely ridiculous, but not being self-aware enough to realize it was ridiculous. It was a way of mimicking the form of punk while completely removing any sort of substance from it as well. That’s probably the most pretentious answer that anyone will have about Pete-za, but I’m liking it, so we’re just going to roll with it.

MR: Did you do theater or forensics in high school or college?

PJW: I did forensics in high school for four years. Then I coached forensics for ten years after that. There was also a really good scene of a lot of independent theater companies around town. Pink Banana was one that was around for a number of years that did some interesting one-act stuff. Alamo Basement was the other one, they were doing a lot of stuff playing with the form of theater.

MR: As you were involved in theater projects, do you think that helped your noise projects evolve?

PJW: I realized that I could combine what I was doing with music with the theater stuff that I was doing as well. There was this opportunity for overlap and at the same time, I was starting to get bored with that “just a bunch of pedals” thing. 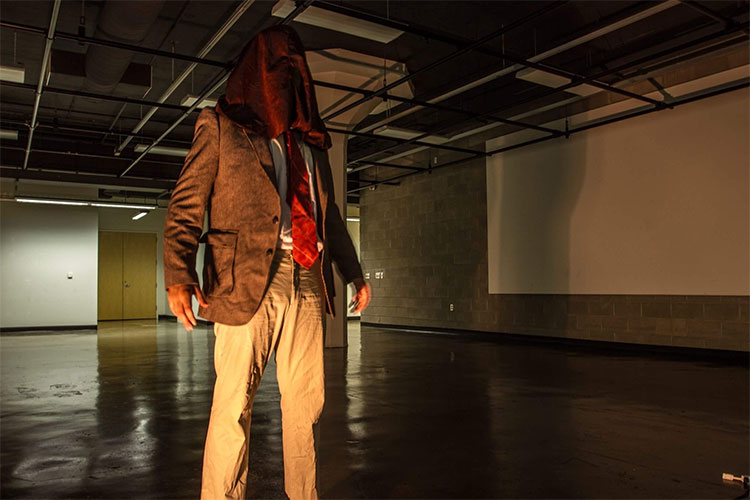 MR: Nowadays, I see noise shows that you’re booking and it seems like it’s a bunch of new people that I don’t know anything about.

PJW: There’s been a nice crew of new noise kids in Milwaukee in general. A bunch of new harsh noise folks have started doing stuff, bringing in a new sound. I think it’s really interesting, too, because it feels like they’re a definite break from the harsh noise that was happening maybe seven to ten years ago. They’re playing with texture, willing to not be overwhelming with sound but still have that loud, harsh aspect to it, allowing it to sit in different registers and find frequencies and things like that. A bunch of really cool people have been coming out of UWM. It’s been really exciting. Amanda Schoofs has done an amazing job with the music technology and composition program. There was definitely a valley for a while, but I feel like since I’ve been back from Boston, a lot of exciting things have started to pick up.

MR: Over the time you were gone, even though it was just a year, were there any major changes or was it pretty similar when you got back?

PJW: It felt like night and day. When I left, setting up shows here sucked. I think the year before I left, I had an average attendance of eight people. I was really bitter when I left. But the program I got involved with, it made the most sense for me to be back here. I got hooked up with some of the people who are in The Jazz Gallery and they brought me in.

At the same time, there’s this funding program at Madison called The Network Fellowship, which is all about trying to connect what’s happening at the university with organizations around the state. I have a venue that wants me to do literally anything that I want and these people are going to pay me money to do this. That’s when the Experimental Education Series started.

Almost immediately after I got back, show after show was packed. Consistently there’s been twenty-five, thirty, thirty-five people at every show. For noise shows, that’s better than it’s ever been in this city. It’s not even that shows have been going well, people have been excited to do stuff and they’re trying to get me to do stuff in their spaces, which is totally wild. It’s exciting.

MR: You have an album coming out and you said you have a bunch of other stuff coming out, too.

PJW: If everything goes according to plan, I’m going to have ten new releases out this year. The album is the focal point in a lot of ways. I’ve been working on that for four or five years at this point. It collects the material I’ve essentially been doing over the last couple of years. It takes the audio portions of that. This last tour I did over winter, that piece is the last piece that went on there and I think kind of drew everything into one. It made it a full album. It’s on my label and Misanthropic Agenda, which is a label I’ve been infatuated with for years. It seems like everything they do is incredible. The aesthetic is fantastic, so I’m excited for that to be a thing.