For those unfamiliar with the sort of experimental jazz and noise shows that take place in the tiny brick cube that is the Sugar Maple’s back room, the news that legendary anarcho-punks The Ex were kicking off their tour at the Bay View craft beer standby elicited equal numbers of fist pumps and head scratches. A 36-year-old, highly influential noise-rock collective that likely in some way influenced every experimental punk band that came after them is playing the Sugar Maple? What? Then again, for all of their worldwide acclaim, The Ex aren’t exactly a household name in the States, so not a lot of people were even aware the show was happening, much less confused about the locale.

When The Ex took to the stage area, set up on the floor in the back of the main room (no, they didn’t play in the back), and launched into the seven-minute-plus “Four Billion Tulip Bulbs,” the packed-in crowd of just under 100—some of whom traveled from Chicago, Marquette Michigan, and other faraway parts—had no doubts that Sugar Maple was absolutely the perfect venue for The Ex, a setting that contributed to one of the most special nights of music in Milwaukee all year.

The Ex were nothing short of a whirling, pulsing, percussive guitar-based drum circle utilizing rhythm guitars in the most literal sense; the riffs battered out of Andy Moor’s, Terrie Hessels’, and new singer Arnold de Boer’s instruments oft times resembled beats instead of chords. Songs like “Every Sixth Is Cracked” from 2013’s Enormous Door throbbed and vamped in a trance-inducing repetition unlike anything this side of The Fall until the guitars exploded in a hail of discordant, bent strings, steered into crescendos by the swirling drumming of Kat Bornefeld. A circular perpetual motion machine, Bornefeld rarely played anything resembling a standard “rock” rhythm, opting instead for her own mashup of world music patterns that would be hippie if they weren’t so punk.

Layering melody and skronk atop The Ex’s earthy clank was frequent collaborator Ken Vandermark, whose saxophone meshed flawlessly, adding sultry lead lines and chaotic squeals where appropriate. De Boer replaced band founder G. W. Sok in 2009 as lead vocalist; if there were any bumps in the road during that transition, they’ve been long since paved over. He was an impassioned force behind the microphone, bashing his guitar while delivering anthemic lines as memorable as they were subversive (“All the pilots get rich / All the passengers pay for it!” from “Maybe I Was The Pilot”).

For a bunch of crusty old anarchists who have been at this since 1979, the band was vibrant, energetic, and obviously having a killer time. Before taking a turn up front on lead vocals, Bornefeld graciously thanked the audience, remarking that it was their first time ever in Milwaukee. “It took us 36 years, but we made it!” De Boer kept the good vibes rolling, gushing about the excellent food they had earlier in the day. The vibes were returned in kind, as everyone in the Sugar Maple knew full well what a special moment this set was.

The Ex will move on from Milwaukee and play larger venues by far, and in a way, it’s too bad a groundbreaking band like this one can only fill a small bar in Wisconsin’s largest city. Then again, were they more well-known, the cool kids hip to the secret wouldn’t have been able to enjoy such a thrillingly intimate show. It’s not often bands of this caliber set up on the floor a foot from the front row, and it’s even more rare that it happens here. The Ex and Ken Vandermark at the Sugar Maple on October 20, 2015 was one of those “I was there” moments you’ll be hearing old grandpa rockers talking about in 20 years as you wonder if they’re bullshitting you. Show of the year? Show of the year. 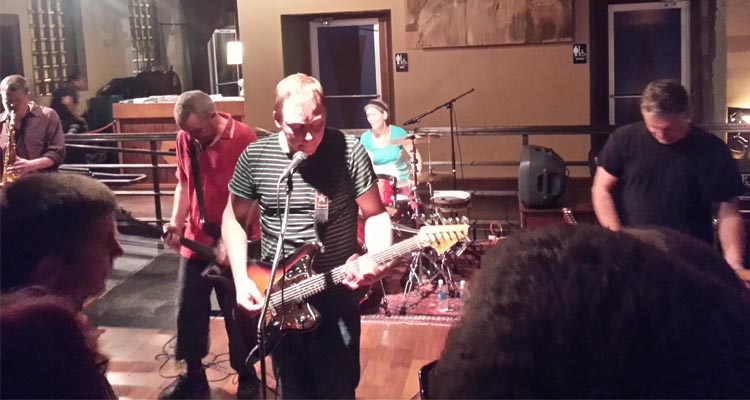