The East Side’s annual Summer Soulstice Music Festival is meant to ring in the first day of summer with music, food, drinks, and that one guy who always shows up to this thing carrying a giant lizard. All of those things were present for Saturday’s installment (yep, lizard guy was there, too) but the “summer” part of the fest seemed strangely absent. Still, unseasonably cool weather, gray skies, and a few sprinkles couldn’t keep the crowds away from North Avenue, or keep us from delivering our patented (not really patented) minute-by-minute summer festival report.

1:12 p.m. – After parking near the corners of Webster and Murray and walking six blocks, we’ve arrived. We quickly recognize the familiar sounds of Cage The Elephant’s “Ain’t No Rest For The Wicked” at the nearby Urban Third Coast Milwaukee Dial Milwaukee Daily-sponsored “Arts Avenue” stage. No, that Miller Lite money didn’t bring Cage to the East Side. Rather, this was Trapdoor Triptych, a youth showcase band, which gives them a pass on playing covers. Look out, LoveMonkeys, the kids are coming.

1:36 p.m. – Speaking of Miller Lite, we aren’t taken by the $5 toll for a Lite, Summer Shandy, or Blue Moon. Fortunately, we quickly find a libation loophole—$2 Lakefront IPAs (among various other beers) at Two Bucks bar, served in a plastic cup for easy transport.

1:51 p.m. – Beer in hand, we observe a foam weapon-wielding demonstration from our pals at Magnetag. 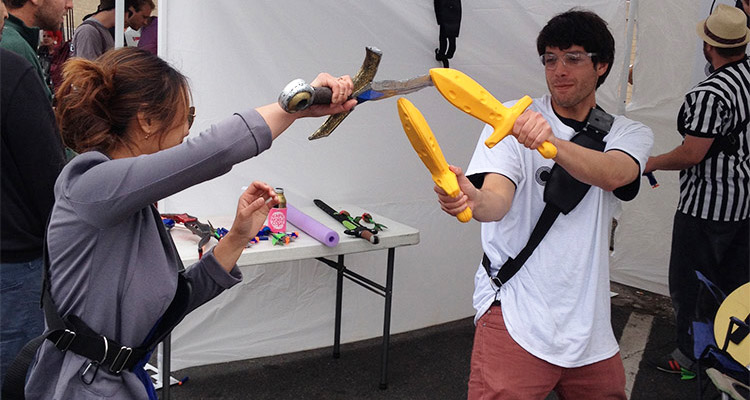 2:01 p.m. – Keeping in unofficial festival season tradition, we give into temptation and buy that Wiskullsin shirt we’ve been eying since Locust Street Festival. Anything to offset the staggering Milwaukee Home shirt count, which we’ve already abandoned at this point.

2:04 p.m. – Rivaling the “Techno is for lovers” rooftop partiers from two weekends back, we happen upon these fucking guys ruining vendors’ lives and confusing everybody with their two-man Radio Flyer dance party, gesturing erratically to a Britney Spears song. 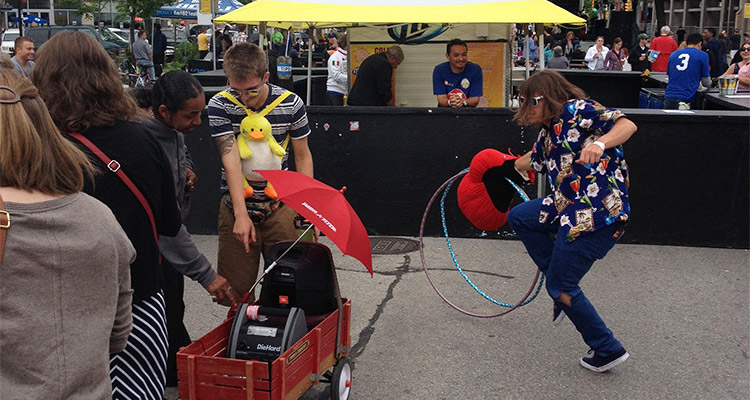 2:19 p.m. – A light drizzle begins to roll in. Back at the Murray Arts Stage, the delicately dour sounds of Kyle Feerick—the only non-youth band currently playing at the unabashedly top-heavy affair—provide apt aural accompaniment to the warm rain forcing onlookers to audibly question their choice of attire.

2:39 p.m. – Feerick was good, but the acoustic guitar, lap steel, and fiddle trio were lulling us into a coma. We nab another $2 IPA and arrive at the Rage In The Cage dodge ball tournament. Partway into a match between Hooligan’s and The Loaded Slate, things are turning heated. Note to self: Continue never going to The Loaded Slate. 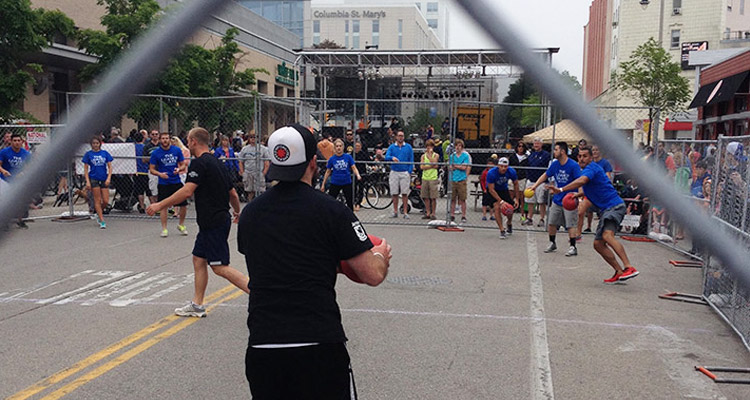 3:22 p.m. – Newlybreds begin their set of fest-friendly frat-funk on the East Stage, giving Milwaukee a nice preview of the kind of acts that play noon slots at Summerfest. A lone hula-hooper girl does her thing nearby. (Seriously: What happened to all the hula-hoop people this festival season?)

3:55 p.m – Calamity Janes And The Fratney Street Band recently released one of the best-sounding Milwaukee records of recent years. Their set on the West Stage isn’t quite as sparkling, however, with numerous sound issues and an onstage sound guy who seems visibly baffled by the group’s four vocals/fiddle/stand-up bass setup. No matter: “Milwaukee” still sounds lovely, and a bunch of giddy toddlers are seriously digging it. 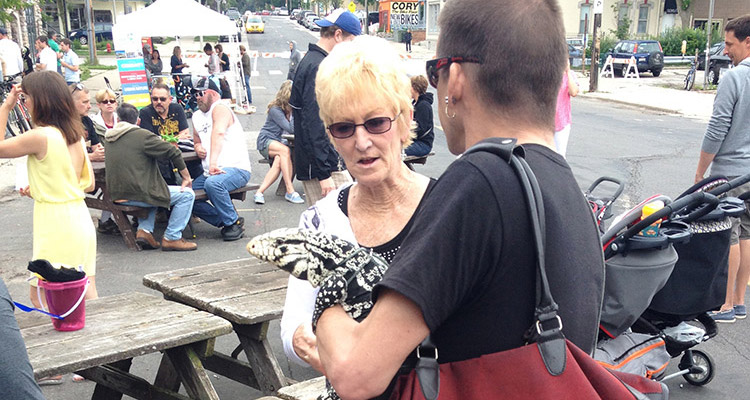 4:13 p.m. – Most of Calamity Janes’ sound issues are finally resolved, and the lovely “Old Oak Tree” sounds, well, lovely. The crowd is filling in nicely, too. Oh, and there’s a mime wandering around for some reason. A mime!

4:30 p.m. – Motherfucking Whips take the East Stage. Why the fuck aren’t these guys playing later in the fucking day? So fucking good. Even a bride and groom in full bride and groom outfits seem taken by the band’s refreshingly un-ironic hard-rock swagger.

4:42 p.m. – You ever have one of those moments where you turn around and see Mike Schank sitting next to your wife? It’s really something. Also spotted in the Whips crowd: Hot Coffin’s Chris Chuzles, Pabst Theater’s Marc Solheim, and 14 different bands’ Myles Coyne. Oh, and David Gruber, who we later spy standing next to his own Gruber tent.

5:05 p.m. – After Whips draw to a close, we join the throngs of like-minded North Ave. occupants and head over to catch the end of yet another tight and upbeat set by Ugly Brothers. They’re giving us a shout out!

5:18 p.m. – Time to duck into Two Bucks for some sliders. Two Bucks is nothing fancy, but it’s one of the most underrated bar/restaurants on the East Side. The Brewers are up 9-2 and…wait, why is our water pink? Huh.

5:47 p.m. – News trickles in that today’s “Rockesha” fest in Waukesha has been abruptly cancelled mid-fest. Sadly, Waukesha will now be deprived of sets from Mr. Big, Firehouse, Lita Fort, Quiet Riot, and Warrant. We await a surge of jilted fans looking to fill a hair-metal-sized hole in their hearts at Summer Soulstice. (Not really.)

6:10 p.m. – One of the city’s best bands, Soul Low, ends a pitch-perfect set on the East Stage with a ridiculously great cover of Blondie’s “Heart Of Glass.” The crowd loves it, and so do we.

6:12 p.m. – The Soul Low booking overlap (feel free to sprinkle real bands before 2 p.m. next year, guys!) causes us to be late to a rare Painted Caves performance. Within minutes we’re realizing what a terrible decision out tardiness was. The band is destroying an extended version of its “Paper Tigers,” and a middle-aged guy is in the midst of a drunken/interpretative dance befitting the mesmerizing bar-side rendition. Even sans the first 11 minutes, this is the set of the day so far.

7:03 p.m. – Dana Coppa and SPEAK Easy are energizing the East Stage with the only scheduled hip-hop set of the day. Why isn’t there more hip-hop this year? The dude with the lizard nods in approval at the duo’s easy chemistry and crowd-pleasing antics.

8:24 p.m. – Okay, things are getting blurry at this point. “I’ve heard of these guys!” exclaims someone during The Fatty Acids set on the East Stage. “They’re good!” Yes they are. This strikes as incredibly funny at the time.

9:17 p.m. – Still blurry. We’re pretty sure we’re haggling with someone at the Landmark to buy their totally sweet PBR bowling ball. This strikes us as incredibly funny at the time.

9:32 p.m. – Okay, we’re in the Y-Not III now for some reason. Shots. Everyone is talking about the impending Bar Rescue rescue of the East Side bar. Add as many turkey sliders and unnecessarily-elaborate shaken cocktails as you want, Bar Rescue, but don’t even think of touching that velvet Shatner.

10:02 p.m. – Okay, things are getting really blurry at this point, so let’s just say this: You win, Kane Place Record Club. You win. Well played.