While making the slow cruise to park outside The Rave on Wednesday night, herds of twenty-somethings made their way to the venue—guys in tank tops and girls just in bras, for some reason. It may seem like an odd choice for a brisk February night, but once inside, it was a popular wardrobe choice. The scene was like a mid-winter Milwaukee take on Coachella.

Past the security checkpoint, Grandtheft‘s set was in full swing. The crowd was jammed into a jumping mass positioned in front of the stage. The plentiful stragglers milling around the club were either wide-eyed and grinning or mouth-agape zombies on their way to a blackout. On stage, the action was not the actual performers but the large video screen at the back of the stage. The random trippy videos paired well with the pounding bass. When the uninitiated imagines electronic dance music, it’s likely that they’re imagining something close to the thumping rhythms of Grandtheft.

Following the Grandtheft set, Desiigner cranked the energy way up. He could loosely be considered a rapper, but he only rapped random five-second snippets along with the backing track. The set was the equivalent of blasting V100 with two guys jumping around yelling “Yeah! Hands up!” constantly for 45 minutes straight. The focus was on putting out energy to the crowd, and Desiigner delivered. The majority of the crowd pogoed throughout the set, one limp hand flopping around above each of their heads. Outside the closely packed main crowd, random people took to dancing in their own little world. 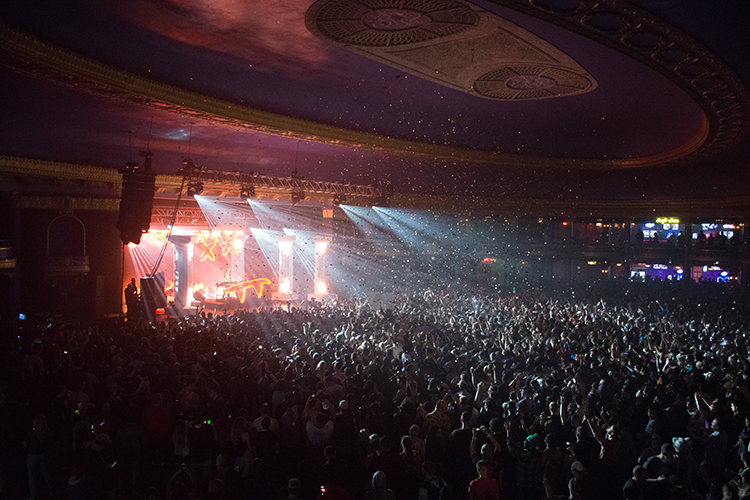 Midway through the set, Desiigner pulled two very excited basketball jersey-clad fans onto the stage. The ecstatic pair pogoed, took selfies, and crowd surfed their way back to the floor. Later in the set, Desiigner did some crowd surfing of his own. He made it to the back of the crowd without disrupting his “Yeah! Hands up!” chant. He then proceeded to run through the crowd and back to the stage, chant uninterrupted. As confusing as it was to watch people hype up a backing track for 45 minutes, the energy was undeniable.

After a quick change over, the curtain dropped and lights flashed, revealing Steve Aoki behind his DJ table. The crowd repeatedly jumped in unison as if they were experiencing the defining moment of their lives. After a few minutes of pumping the crowd up, Aoki paused to take the mic and inform the audience that Milwaukee is one of the best places in the world to play. Aww Steve, you’re just saying that. Do you tell that to all the cities? 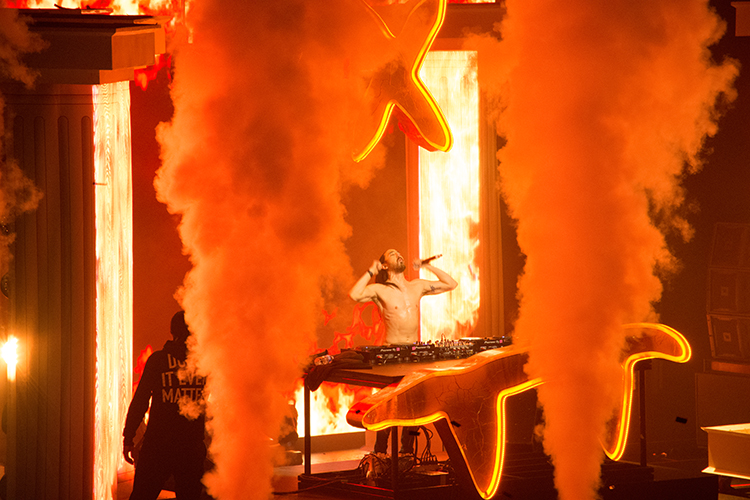 Early in Aoki’s set, the video screen displayed exploding cubes labeled “Tom Morello” and “Rage Against The Machine” followed by a silhouette of Aoki’s head. If it was a Rage remix, it was so far extracted that it was unrecognizable. The Aoki silhouette was similar to the cartoon version of himself emblazoned on the T-shirt he wore on stage. This seemed like a questionable move until later in the set when Aoki popped off the shirt and gifted some lucky fan the sweaty garment off his back. It was like the Lebron of EDM giving you his game jersey.

Throughout the rest of the set, random images of Aoki would appear on the video screen. It felt like being subjected to an Aoki promo video while simultaneously watching Aoki in the flesh. The night, as a whole, felt like being stuck inside the world’s longest commercial. The synchronized crowd jumping, confetti falling, and intricate stage set appeared as the most realistic TV/internet commercial to the non-participating onlooker. The participants, however, were seizing the moment and creating memories that they’ll likely recall for years to come.