Tonight, on day three of Summerfest 2018, living-legend punk band Social Distortion will headline the Harley-Davidson Roadhouse at 10 p.m. It’ll surely be a lively, crowded show full of old (and new?) fans enjoying the blistering sounds of a group that’s been around for four decades. And maybe some of those fans will remember an infamous event that happened here three decades ago: the great Social Distortion Milwaukee Riot of 1988.

Yes, back on October 4, 1988, a Prison Bound-era Social D was scheduled to play Milwaukee’s famed (and now long-gone) Odd Rock Cafe. That didn’t quite work out. With the small club severely overcrowded before the band even took the stage (more than 200 people in a 90-capacity club, by some reports), police showed up and tried to clear out the all-ages crowd. What followed was a near-riot that included, if one attendee was to be believed, a flurry of nightsticks and people screaming “I didn’t do anything! I didn’t do anything!” Thirty-eight people—25 adults, 13 juveniles—were arrested, and a boyish Charles Benson was on the scene for TV6:

There’s nothing funny about police brutality and trenchcoat-clad news anchors, but there’s a lot to appreciate in these vintage reports. Some highlights:

• Benson pressing an attendee on the “hard rock, punk rock-type band” that caused the disturbance.

• The effort made by club owner Jack Koschik to split the crowd into two shows, and have Social Distortion play twice.

• A possible anonymous call that set the whole thing off, saying there might be trouble with “the skinheads.” 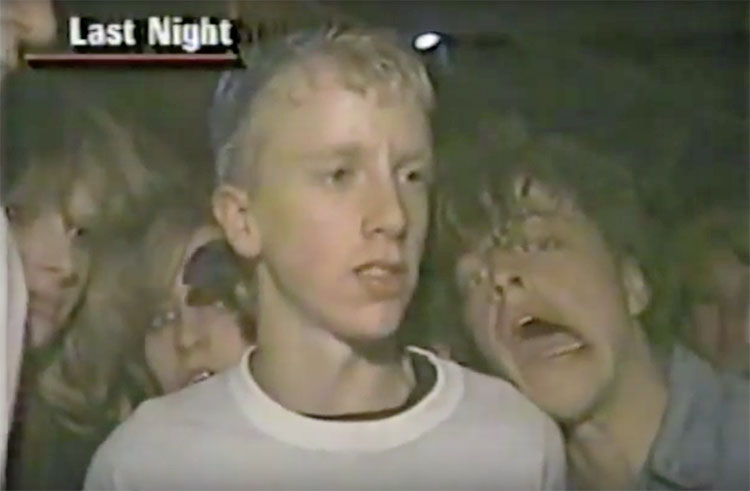