Snoop Dogg‘s original Puff Puff Pass Tour rolled out in 2001. Its sequel, which sold out the Riverside Theater on Thursday night, featured only Kurupt and Warren G from the first iteration. Fans of ’90s G-funk, however, could scarcely pass up this current nostalgia trip, which boasted the reunited Bone Thugs-N-Harmony as well as Tha Dogg Pound, among others, depending on location. Those who braved the Milwaukee River breeze in an entrance line that stretched almost to Water Street were rewarded with close to four hours of hits, good feelings, and, yes, copious clouds of smoke.

It took a while for the crowd to warm up to Tha Dogg Pound (Kurupt and Daz Dillinger), who were somewhat hamstrung by a DJ with stage presence one might imagine coming from Nick Swardson pretending to be a hip-hop DJ. It’s amazing that such a high-profile tour would feature so many unimaginative DJs pummeling the omnipresent air-horn effect after every song. Such is life. The energy level in the room shot up when Warren G took the stage, though, and he wasted little time before puffing and passing a blunt to the front row. Impressively, security seemed to take it all in stride; at press time, Milwaukee Record cannot confirm nor deny the legitimate presence of cannabis in any of the items passed from stage to crowd.

The night’s lineup was not precisely as advertised. Fans of DJ Quik were disappointed to find him absent, but the addition of Chicago motormouth Twista for at least this Midwest swing was a smooth move. The former Guinness World Record holder for “fastest rapper” has lost none of his dizzying verbal skills over time, and he exuded gratitude as a majority of the crowd seemed to know every word of “Is That Yo Bitch?” and “Slow Jamz.” It’s a shame Coo Coo Cal couldn’t have dropped by for a “Ride Till We Die” cameo.

In fact, collaboration was curiously absent throughout the night. It was a bit strange having Kurupt and Daz out doing songs like “Bitches Ain’t Shit” and “Doggy Dogg World” without the emergence of Snoop himself; surely he was in the house, somewhere. The lone 213 track was “So Fly,” although the expected Nate Dogg tributes were plentiful throughout the night.

The planet may be in tumult, but at least in 2016 the bad blood between legendary rap crews is a distant memory. It’s hard to imagine the Eazy-E protégés of Bone Thugs coming anywhere near Snoop Dogg in the early ’90s, and the group had previously feuded with Twista for years as well. The numerous tributes to fallen legend Biggie Smalls by his former opposite-coast rivals can only be described as heartfelt and uplifting, and the crowd roaring Eazy-E’s lines during Bone Thugs’ “Foe Tha Love Of $” was quite a rush. The group’s supposed final album was initially announced for a 2015 release; there’s been no indication that it’s anywhere near completion, but fans have to be pleased that they’ve all managed to stay together for the past couple of years, and everyone reveled in the old-school chemistry.

Snoop has clearly embraced his avuncular image, probably aging as gracefully as a gangsta rapper can. It’s sobering to think that the younger faction of the audience were here to witness an aging legend, the way Snoop’s middle-aged fans might feel an urgency to catch one more Public Enemy show. Despite having recently released a well-received album, Coolaid (not to mention a new Christmas single), his set was pretty much all classics and cover snippets, and no complaints were registered. Snoop was relaxed and radiating peace, but he wasn’t slacking vocally, either, ripping through more full songs than traditionally expected at a big-name rap show. The oddest moment was the late-set House Of Pain cover “Jump Around,” the Wisconsin relevance of which was perhaps lost on Snoop, but it certainly got the crowd riled. The Doggfather closed with his 2011 Wiz Khalifa collaboration, “Young, Wild & Free,” which felt preposterously appropriate coming from the 45-year-old headliner. This tour may be mainly a trip down memory lane, but no one could accuse Snoop of going through the motions. He simply knows his audience and offers a much-needed opportunity for communal positivity. 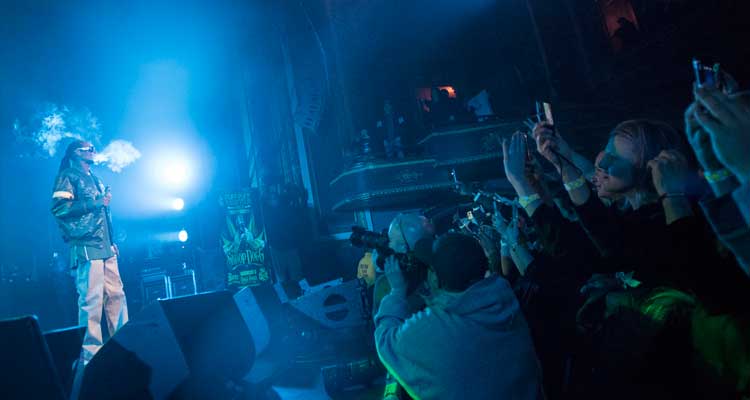