Deanna Belos is on fire.

In the roughly 15 months since her project, Sincere Engineer, released Rhombithian—the band’s debut album—on Red Scare Industries, the Chicago singer-songwriter has earned heaps of attention and praise from music publications and punk audiences alike. Along the way, Belos got the opportunity to open for some notable bands, tour the country, play some huge festivals in Montreal and Florida, and hit the road with her idols in The Lawrence Arms.

Before she comes to town to open for Brendan Kelly at Cactus Club on Friday, Belos talked to Milwaukee Record about her breakout 2018, plans for 2019, memorable experiences she’s had in Milwaukee, and what Norm Macdonald thinks about her music.

Milwaukee Record: Even though your first record came out at the end of 2017, it seemed like you really began to hit your stride this year. A lot of people seem to have happened up the record this year. And you had some larger shows and higher-caliber opening opportunities. What was last year like for you?

Deanna Belos: It was super fun. I toured with The Lawrence Arms like six months after the record came out, and I think that might be part of the reason it started getting to people and reaching a wider audience. And I was playing shows a lot. I pretty much went all over the U.S. for the first time.

MR: So other than playing with the Lawrence Arms, what were a few of the highlights from last year?


DB: FEST. And I played at Pouzza Fest in Montreal. That was awesome. We played with The Decedents and Less Than Jake and Bouncing Souls. We’re playing with Alkaline Trio tomorrow, which I still can’t even believe.

MR: Yeah, that’s amazing. I noticed that! Between The Lawrence Arms and the run you had out East with Brendan Kelly and now the Alkaline Trio show, what is that like? As a person who grew up in Chicago, where those are all huge deals, what’s it like to be playing with a few of the heavy-hitters in your hometown?

DB: The Lawrence Arms are my favorite band. I mention that all the time, so it’s kind of like a dream come true to great to play with them. And they’re, like, my friends now, which is super weird. I’m very grateful for all the opportunities everyone has been giving me. It’s kind of surreal.

MR: Are there any good experiences or pieces of advice that you got from touring with your idols—either The Lawrence Arms or the recent run with Brendan?

DB: Nothing really comes to mind. That was like my first tour and my first time playing out of Illinois pretty much, other than some small Indiana or Michigan shows. But just being on tour in general is a very weird existence. Your hours are all different and everyone is like “you’re going to see all these cool places.” No, you see some gas stations and the venue, then you move to the next one as soon as possible.

MR: Last year, I think I missed your Milwaukee show by like three days. You played a house or something. Living only about 100 miles away, do you ever make it up to Milwaukee? What type of experiences have you had here, either on-stage of in general?

DB: That show was super fun. I played a different show up there last year as well at the Colectivo coffee shop with The Smoking Popes. I’ve always liked Milwaukee, but I don’t get out there too much. Usually just for shows that aren’t coming to Chicago, I’ll make the trip up—either to watch or to play. I saw NOFX in Milwaukee maybe two years ago.

MR: Oh yeah, with PEARS at The Rave?

DB: Yeah. That was a fun one. We stayed at this hotel that our friend works at and were up until like four in the morning. Milwaukee’s cool.

MR: With this probably being the first time a lot of the people in the audience will be seeing you, what are we to expect at Cactus Club on the 11th?

DB: Just my normal acoustic set. I usually throw a cover in. I’m working on stuff, but I’m not ready to play anything [new] in front of anyone. Most people are probably going to be going for Brendan. He just put out a record last year that’s super good. He let me help him work on a music video for one of the songs for it.

MR: It was the Buffalo Bill one, right?

DB: Yeah, he let me make that and I don’t know why. I don’t know how to do that stuff, but he trusted me to film it and edit it.

DB: I just hung out at his house for a few hours and then we went to this bar called GMan that he used to work at and that’s this big staple in the Chicago punk rock community. It was all shot in those two places. He kind of directed it and some of the B-roll footage was me scared out of my mind that I wouldn’t have enough with what he was saying, so I took shots of, like, the candle for some filler.

MR: And I noticed he uses your ID card to cut the blow…or the fake coke, I hope. What did you use for that? Was it powdered sugar? Baby powder?

DB: I think it was corn starch. Is corn starch that consistency? I don’t even know. It was from Brendan’s pantry.

MR: I just want to go back a little bit. You had a huge year where people started noticing your album, you had a lot of shows, went on your first real tours, made a music video, and played with some of your idols. What are a few of your goals for this year?

DB: I’m working on new stuff. I think our approach to writing music is a little different. It’s song-by-song, instead of having a ton of stuff and going in to record. We’ll have some stuff we’re going to work on the next couple of months and maybe release a couple songs. My main goal is to have a record written by the end of the year. That’s what I’m telling myself.

And we’re going on a quick Midwest tour with Mom Jeans that’s our first full-band tour. I’m playing Pouzza Fest again, but it’ll be full-band this year. We just did an Audiotree a couple weeks ago. 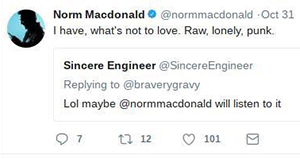 MR: One last thing! What was it like to have Norm Macdonald speak highly of your music?

DB: It’s weird because when he played a show [in Chicago], I shamelessly tweeted at him to let me open it. He was like “Are you a comedian?” and I was like “No,” but I sent him an acoustic version of a video, and I think he watched it because he said “raw and lonely punk” or whatever. So I think it’s in regard to an acoustic song that I showed him. I sound like such millennial garbage, sorry, but I think he’s talking about the video I sent him like a year before that. I don’t believe he’s heard the record.

MR: Even so, getting that sort of response about a video from Norm is high praise.

DB: For sure. I have his face tattooed on my leg. I love the guy.

Deanna Belos will play a solo Sincere Engineer show in support of Brendan Kelly at Cactus Club on Friday, January 11. Bobby Flowers will open. The 21+ show begins at 9 p.m. Tickets are $12 in advance ($15 doors). 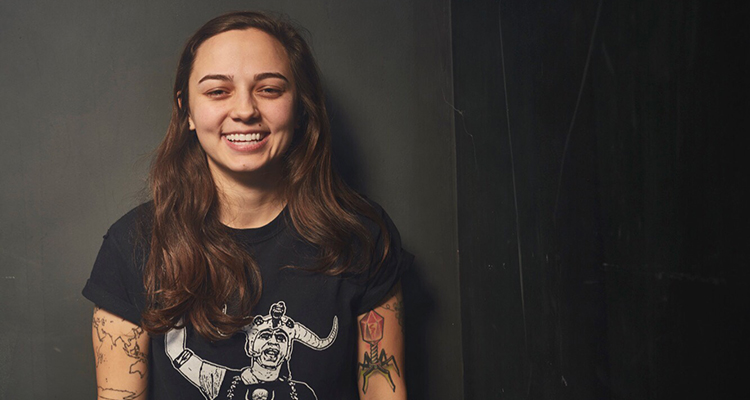