Yesterday signaled the beginning of another Summerfest. Now in its 51st year, the 11-day affair offers the same winning blend of live music, hedonistic festival fare, fireworks, and fun on Milwaukee’s lakefront. The return of “The World’s Largest Music Festival” also offers me a platform to dust off the same tired shit. Each year of Milwaukee Record‘s existence, I’ve started every Big Gig sitting alone at JoJo’s Martini Lounge (aka the big tent on the south end of the festival grounds) for an hour and evaluating an hour-long block of music playing over the house P.A. system.

When I started doing this five years ago (Jesus, five years ago?!), I was a brash writer in my late twenties trying to make a point about the festival squandering one of its precious stages—a covered one at that!—by playing top 40 hits in a daily block they called “Pre-Recorded Music” at the time. In the years since my weird concept came to be, the named was changed to “Taped Music,” Summerfest booked what might be its best lineup in decades, and I’m doing the same act of self-imposed misery for a mixture of clicks and the occasional bit of praise from strangers on the internet.

What used to be solely a means of illustrating a festival’s flaw has also become an opportunity for forced self-reflection over the course of one lonely hour each June. How have I changed in the last 360-some days? Where would I like my life to be when Summerfest rolls around in 2019? How much longer will I feel the need to do this? It’s tough but necessary to take stock of one’s life from time to time, and one of my annual spells of contemplation just so happens to take place when I’m alone in a drafty tent between noon and 1 p.m. on a Wednesday every June.

Now looking down the barrel of my mid-thirties and sapped of all joy by family illness and consistent interpersonal turmoil, I ventured back to JoJo’s Martini Lounge again to begrudgingly partake in this yearly tradition of self-flagellation in festival form because, frankly, I have no reason to stop. The name of the music block has changed and Summerfest has improved mightily, yet—in spite of my best efforts for personal growth and new perspective—my life remains thoroughly stalled. Thus, an older, somehow less fulfilled version of that bold and opinionated 29-year-old that first reviewed Pre-Recorded Music back in 2014 returned to the hallowed (or hollow?) grounds just before noon on Wednesday. Though the ritual was the same, the experience was much different than ever before. In fact, it’s changed to the point where I’m left to wonder if I’ll even go back next year.

How pointless has it all become? As you’ll notice in the image above, I found out that Summerfest doesn’t even bother to list Pre-Recorded or Taped Music on its daily lineups anymore. Once symbolically reviewing an event that added nothing to the Big Gig, I was now actually reviewing something that didn’t exist. Anyway, here’s what I heard!

11:54 – “The Man” by Aloe Blacc
As usual, I arrived at the grounds early enough to walk around a little. I killed time by checking out the new Klement’s stage, entering to win a motorcycle at the Gruber Law Offices tent, and quickly coming to the conclusion that Terrapin Brewing is really going for it this year. When I neared the JoJo’s tent, I heard music. Recent years found me sitting in silence for upwards of 20 minutes before music started, so hearing “The Man” was a welcomed change in operations. I wasn’t delusional enough to think these reviews had anything to do with it, but it was clear they were far more prepared this time around. This song is fine.

11:58 – “That’s What I Like” by Bruno Mars
Aloe Blacc was followed by the summer song of 2017 (or was it 2016?), Bruno Mars’ “That’s What I Like.” Call me paranoid, but I could feel the eyes of all three sound engineers on me. Maybe it was because I was the only non-JoJo’s or non-Summerfest employee in the huge space or maybe they were on to me. Figuring I’ve heard this song a million times before, I went over to nearby Louise’s Trattoria at the crack of noon to take part in another personal opening day tradition: buying the first beer at Summerfest.

12:04 – The last half of “Pour Some Sugar On Me” by Def Leppard
I made it back in time to hear the last part of Def Lappard’s most famous song. I wondered if Def Leppard is playing Summerfest this year. They are.

12:06 – “Fancy Footwork” by Chromeo
When Chromeo’s dance anthem, “Fancy Footwork,” came on, I decided it wasn’t the song I wanted to hear whilst drinking alone in a martini lounge at noon. I took the opportunity to walk over to Solo Pizza (located well within earshot of the tent) to procure their newest Italian-adjacent edible atrocity. I buy my Bacon Cannoli and make my way back to the still-empty tent before the next song ends.

12:10 – “Youth Of The Nation” by P.O.D.
That song is P.O.D.’s “Youth Of A Nation.” As I slumped down at a table with half-consumed beer and an unnatural amalgam of pork, peanut butter, and cream cheese, I recalled hearing this song on TRL a lot when I was in middle school. Now I’m 33 and eating a bacon cannoli. Meanwhile, P.O.D. is playing a “Throwback Thursday” showcase on a free stage June 28. The kids singing near the end of the song are surely all grown up by now and most of them probably didn’t vote in the last election. Fuck.

12:18 – “My Own Worst Enemy” by Lit
The playlist quickly careens from the best song of the day, right back to another act playing Thursday’s Harley-Davidson Roadhouse nu metal butt-rock shitshow. I used to sing this song as a joke for karaoke. I used to sing karaoke! I used to do things…with people…for fun and not just for my business. But now I’m alone and miserable and writing about something nobody asked me to do. 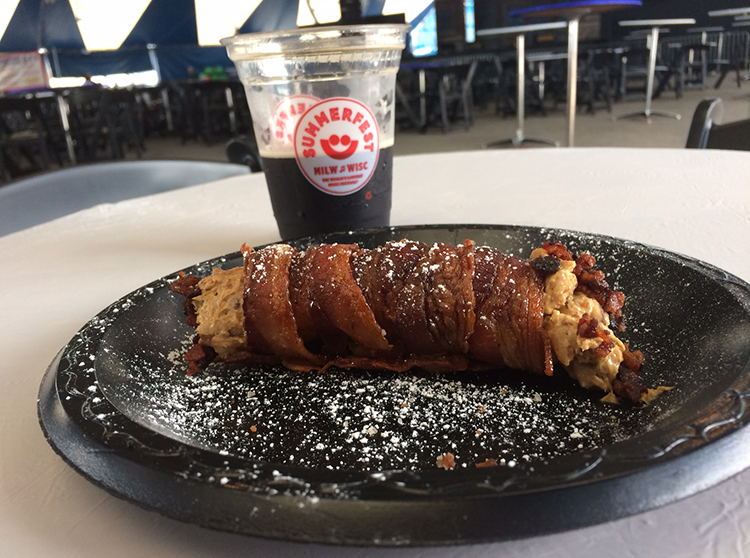 The self-sabotaging message of Lit’s one and only hit isn’t lost on me as I finish the last greasy bite of the cannoli and wash it down with beer I bought at noon while on a mission to mine for clicks with sadness content. Like the song’s protagonist, I too am my own worst enemy.

12:21 – “Let You Down” by NF
If either of my parents are reading this 5th annual JoJo’s Martini Lounge recap, this song is dedicated to you. Who am I kidding? They’re not reading this. Also, this song isn’t very good. BOOM! Roasted, NF.

12:25 – “Meant To Be” by Bebe Rexha featuring Florida Georgia Line
I bet Bebe Rexha had no idea “Meant To Be” would become an undeniable, unavoidable smash hit when Florida Georgia Line was brought in to add some crossover country flare to the song. Now she’s tied to them forever, including when she joins the band at Summerfest this Saturday. Now she’s the one who’s featured! How the tables have turned, Bebe Rexha. I hope they get along because, barring another number one song, they’re forever aligned. I can’t help but wonder if shit like these Taped Music recaps and dumb food journalism is my version of Rexha’s “Meant To Be” quandary. Probably.

12:28 – “5 Seconds Of Summer” by Amnesia
Just when things seem at their most bleak about halfway in, I was surprised to hear someone clapping behind me as the waning moments of Amnesia’s forgettable (get it?!) “5 Seconds Of Summer” play over the speakers. It’s local filmmaker, Milhouse impersonator, and general scamp Ryan Fox. He says he enjoys the Taped Music columns and he wanted to experience it firsthand. 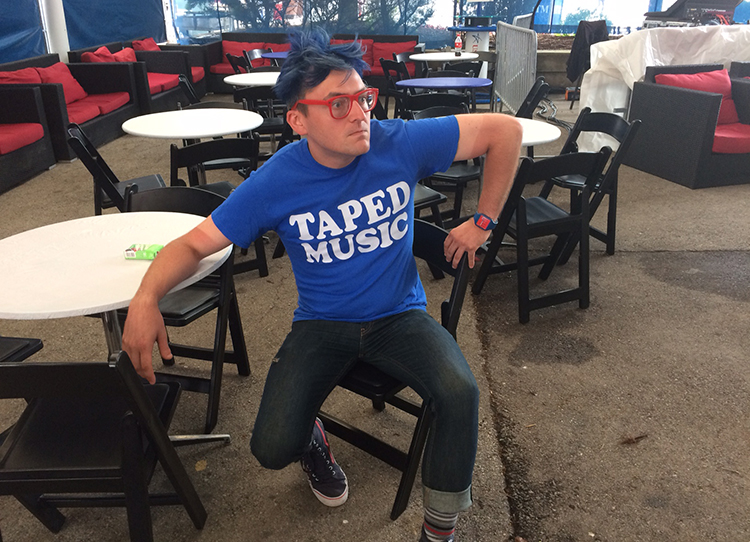 At first, I’m surprised to see anybody I know. That’s never happened at one of these before. My initial reaction was to say something to the effect of, “I can’t be here with anybody, it’ll ruin it!” Then I see his homemade “Taped Music” shirt and decide it’s a honor anyone cared enough to stop by and check in on me during this depressing annual ordeal. And what’s there to ruin anyway? My unhappiness and solitude? I decided to invite him over to sit by me.

12:31 – “Dancing In The Moonlight” by King Harvest
I get Ryan up to speed on my first 30 minutes and let him know the event no longer even has a name anymore, which seems to trouble him as much as it fucked me up half an hour earlier. At some point, a wiry dude in a Tomah sweatshirt walks into the tent, faces the empty stage and starts bopping his head and tapping his foot to the King Harvest song. I wonder why he felt the need to face the stage.

12:35 – “War” by Edwin Starr
The oldies continue, though Tomah guy leaves, when “War” comes on. Partway through, the audio dips to allow 1 p.m. cover act Marr’Lo Parada a chance to soundcheck.

12:46 – “Boogie Wonderland” by Earth, Wind & Fire
Partway through this one, Parada takes the stage again and starts playing part of “Hey Jealousy” by Gin Blossoms. Some 15 minutes later, that song will start off his set. Along the way, Ryan comes back with a beer. Amid the flurry of activity (including upwards of six people being in the tent), a JoJo’s employee comes up and asks if he can get a picture of us, saying he loves “the recon article” I do every year. I’m so floored that I don’t even answer. I look down as he snaps a picture. So they officially know about this and they like it? Between that revelation and somebody stopping by to experience this with me, I wondered why I was even there? I wonder whether this article has jumped the shark. It’s like when Bart Simpson gets famous for saying “I didn’t do it” or when guys from Jackass are on talk shows and they get to break things for entertainment.

12:50 – “Stuck In The Middle” by Stealers Wheel
This song plays as I’m dealing with the internal dilemma. Anyway, I like this song, but had no idea Stealers Wheel wrote it. Or that Stealers Wheel even existed. Oh to be anonymous again!

12:54 – “Have You Ever Seen The Rain” by Creedence Clearwater Revival
During the penultimate song, my friend (and our resident cat columnist) Erin stops by with some friends, figuring I’d be doing this again. It’s good to be thought of and nice that people visit, but I’m left pondering what’s left to do here. As far as songs to have on in the background as you consider killing a well-liked yearly feature, this sad selection from CCR’s catalog is a pretty good one.

12:57 – “Changes” by David Bowie
I continue conversing with people and tell them I’m heading out in a matter of minutes. Parada is now on stage and patiently waiting for David Bowie’s “Changes” to finish before starting his set. Everyone eventually departs and I’m once again left alone in the tent. Bowie is dead and I’m spared so I can sit here at JoJo’s, eat weird shit, and write about how much this experience sucks every year. I can’t help but be struck by some of the song’s lyrics.

I’ve tried to replicate the same day and worked to manufacture the same feeling five times now. As I’ve experienced the sameness of JoJo’s Martini Lounge for half a decade at this point, the world surrounding that tent has changed considerably. I’ve remained in place. I honestly have no idea if I’ll do this next year. At long last, time may change me. I guess we’ll see.

Walking back to my car, I passed Tarik Moody from 88Nine and he asked if I was heading to Summerfest. I told him I’d just left the grounds and that I was there to review Taped Music. “Oh, you’re still doing that?” he asked. Exactly. 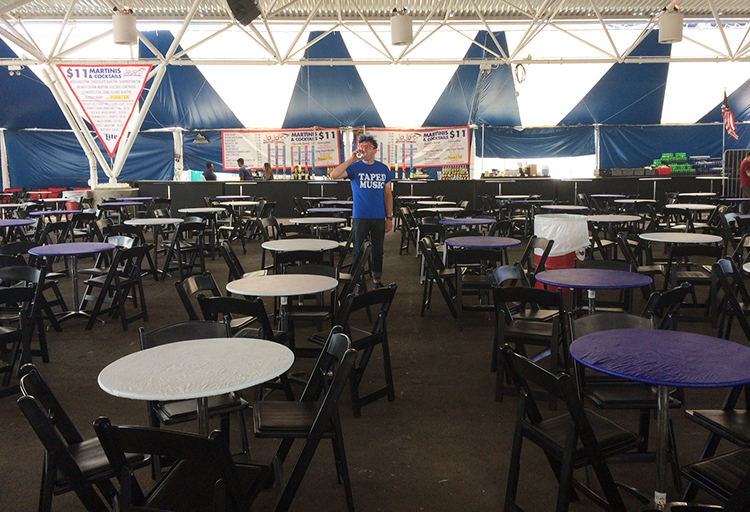