Our fat-free, dolphin-safe Milwaukee events calendar is chock-full of things to do, but only a handful of events are worthy of the lofty honor of “Record Recommended” (patent pending). Here are our recommendations for November 11-17, 2019.

The Chainsmokers + Lennon Stella, 5 Seconds Of Summer @ Fiserv Forum
If you enjoyed The Chainsmokers’ “loud, dumb Summerfest spectacle” back in 2017, here’s your chance to relive the magic.

Candlebox @ Turner Hall Ballroom
If you enjoyed Seattle’s Candlebox over the course of the band’s 25 years, here’s your chance to relive some actual magic. “Far Behind” is still great.

Tour de Brady Street @ Brady Street
Starting Thursday, November 14 and running through Saturday, November 16, Lakefront’s “Tour de Brady Street” will encourage adventurous folks to visit a total of nine bars location on or near the East Side thoroughfare and complete a series of challenges for raffle tickets. The event is one part bar crawl, another part scavenger hunt. After the three-night extravaganza is through, people can find out if their hard-earned raffle tickets will translate to any prizes during a Grand Finale Party at Lakefront Brewery, which will also include a Shle Berry performance. (Through November 16.)

Daniel Van Kirk + Andrew Youngblood @ The Underground Collaborative
Dan Van Kirk is the pride of Rochelle, Illinois. The (now-L.A.-based) stand-up comedian, improvisor, impressionist, and podcaster—who’s probably best-known in the medium for his work alongside the Sklaar Brothers on Dumb People Town—returns to his beloved Midwest with fellow comic, Andrew Youngblood, when “The Together Tour” drops by The Underground Collaborative.

Montell Jordan @ Potawatomi Northern Lights Theater
You see, the hood’s been good to Montell Jordan, ever since he was a lowercase G. But now he’s a big G and he’s got a concert at Potawatomi Hotel & Casino in November, y’all. If you want to hear “This Is How We Do It” and “Let’s Ride” live, here’s your chance.

Chicken Wire Empire + Chris Castino of Big Wu @ The Back Room @ Colectivo
Even though Chicken Wire Empire—a bluegrass band that’s been the subject of an hour-long film and who have shared the stage with the likes of Yonder Mountain String Band and The Big Wu—have little left to prove, the group didn’t waste any time before making good on their New Year’s resolution when they released their first record in more than four years, What Moves Mountains, on January 1. At the tail end of a year that featured that long-awaited follow-up and will culminate with a tour in Germany, Chicken Wire Empire hold down The Back Room @ Colectivo for a two-night residency.

Wavy V (record release) + L’Resorts, Caley Conway @ Anodyne Walker’s Point Roastery
We forget where we read it, but we’re pretty sure someone called Wavy V “Milwaukee’s answer to The Zombies.” It’s an apt description, yet the group’s intricate, delicate, and baroque psychedelia is entirely its own. This is a band with not one, but two flutes. Emily Morrow and Riles Walsh have been terrific together since their days in The Candliers, and their voices and talents are on fine display again. Tonight, the group celebrates the release of a new single, “The Fools Have Gone To Bed.”

The Grovelers + The Unheard Of @ Circle-A Cafe

NBA Jamboree (NBA Jam tournament) @ X-Ray Arcade
Are we hosting a city-wide NBA Jam tournament at X-Ray Arcade? Yes we are. This all-ages event will pit players from all around the region against one another in a day-long battle for the title of metro Milwaukee’s best NBA Jam player. If that lofty honor isn’t enough to bring you out, top finishers will also win some amazing prizes. There will also be a loser’s bracket winner. While you wait your turn in the tourney, you CAN buy a bucket of Enlightened Brewing Co. beers (including the aptly-named Cream City Brix) or get your chest “heating up” with specialty Jeppson’s Malört cocktails (and shots) made available exclusively for the tournament. X-Ray will have other games on free play all night long as well. Get your tickets HERE. 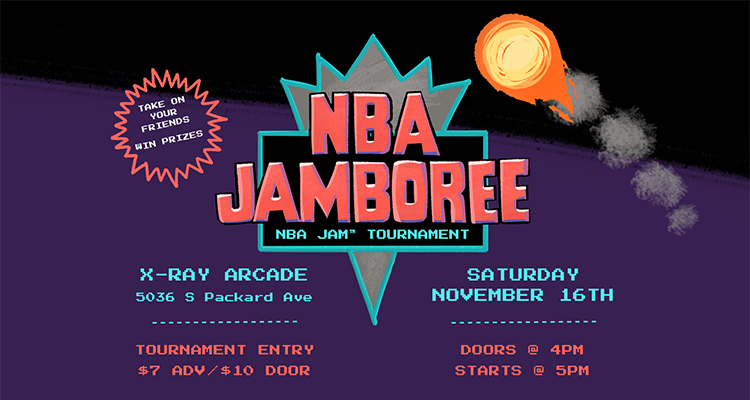 My Brother, My Brother, And Me @ Riverside Theater
“The McElroy brothers are not experts, and their advice should never be followed.” That’s the tongue-in-cheek (?) disclaimer that precedes My Brother, My Brother, And Me, the long-running and wildly popular “advicecast” that has been gracing earbuds for nearly a decade. What’s it all about? Brothers Justin, Travis, and Griffin McElroy offer their advice on questions from both listeners and Yahoo! Answers. Hilarity ensues. Ridiculous digressions, years of in-jokes, and guests ranging from Lin-Manuel Miranda to Jimmy Buffett also figure into the fun.