With the rise of streaming sites like Netflix, Hulu, YouTube and Vimeo, watching TV in the traditional sense is a somewhat archaic practice. Outside of sporting events and political speeches, it’s entirely possible to catch up on nearly all television programming at one’s own leisure. There are exceptions, though. Milwaukee’s 414 Video Spotlight airs every Saturday and Sunday at midnight on My24, showcasing music videos from local artists. While portions of the shows appear on Vimeo, each weekend features content not available online.

The hour-long show is a throwback to a time when the TV airwaves weren’t so impenetrable. Before the mass popularity and technological advancement of the internet, local TV stations were the prime destination for homespun programs of all sorts. For the sake of comparison, 414 Video Spotlight is to present-day Milwaukee what Wayne’s World was to Aurora in the early ’90s. Yet where Wayne and Garth were lowbrow jokers, host Melvin James is a community-focused commentator.

Nestled into the industrial corner of Milwaukee’s northwest side, 414 Spotlight Studio would blend into the industrial scenery if not for the van parked in front, prominently featuring a decal of James. He and wife Tye James opened the studio this past fall. The studio serves as a top-to-bottom production facility for the show, as well as the home of Amazing Moments, and various rental options. “People rent it out for comedy shows, birthday parties,” James says. “It’s a rental, but the headliner of this building is 414.”

The roots of 414 Video Spotlight start with James’ hip-hop group, Poetic Soldier. Their sole video, self-produced by James, set the groundwork for his career. “I was doing weddings and videos with this $75 camera and I said, ‘Wow, what if I take these videos and put them on TV?'” James says.

His foray into television was the talk-show-based Amazing Network Group; he followed it with the dance competition documentation Share The Stage. After the dance competition concluded, James got the green light for the half-hour video show from the Ion Network. After a short run on Ion, the show made the switch to My24. “We went from a half hour to an hour in like six months,” James says. “Then to another day in like four months. It was moving so fast.” The growing success of the show has led to special events like broadcasts from Lil Wayne and Nelly concerts, a New Year’s Eve special, and a live concert event headlined by local artists Petti Hendrix and Munch Lauren.

The show is submission based, and has received videos from Milwaukee artists as well as rappers and R&B artists from Racine, Kenosha, and Green Bay. Even with the ease of promotion via the internet, there are still gaps in communication between artists from different cities, or even different areas of the same city. “When you think you know everybody, you [really] just know everybody on the North Side,” James says. “When you think you’re the coldest guy—no you’re not.”

When asked which artists have gained renown along with their appearance on 414 Video Spotlight, James mentioned a handful of names.

According to James, Soc Sosa is “the first artist to get a lot of recognition from our show.” Using his success in the Video Spotlight countdown to his advantage, Sosa convinced V100 to play his music.

At the taping of the 414 Video Spotlight New Year’s Eve special, James called Munch Lauren to the stage when the balloons dropped. “Munch Lauren’s got the biggest song right now,” James says.

A veteran of the Bay View Bash and progenitor of the Scholar Life movement, B Justice is one of the more prolific local artists, with three mix tapes and 10 videos to his name. “I like B Justice. [He] makes a lot of good videos,” James said.

James understands that while his TV and internet audiences are important, his local community is also a priority. “The reaction overall from the community is unbelievable,” James says. He sees the 414 Spotlight Studio as a community resource. As they work toward receiving non-profit status, James has plans to further develop after school programs and community outreach.

Having established rapport with his audience and neighbors, James is someone to confide in, and a mentor. Not only does he address current crime issues with a raw sincerity on the air, he also works diligently with local youth outside of the show. Discussing a recent mentee, James beamed with pride as he talked about the child’s shift in focus from partying to rapping and running the studio equipment. “If you give them something to do, it will minimize some of the violence,” says James. “And if I can get one or two to change, they’ll tell their friends.”

The show’s main objective is simple: “We just want to be a positive program,” says James. “We never want anyone to think that this is an African American show. Everybody is welcome.” Built on a positive and inclusive foundation, the show has established a dedicated following. With a solid community behind him, James sees a bright future with a plethora of growth opportunities for the program and studio.

“It’s not a hip-hop show, not a comedy show,” James says. “You never know what you may see.” The one thing he is sure of? “You will see entertainment.” 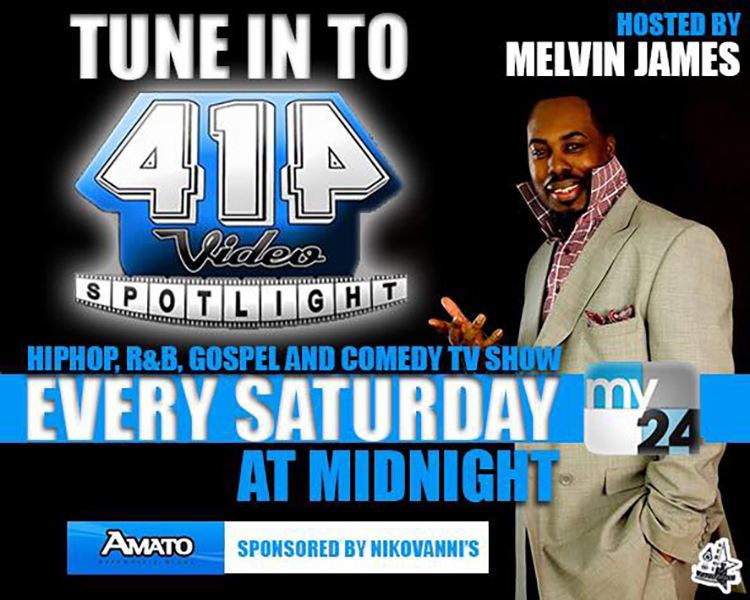