On Friday, outlaw country combo Liar’s Trial will celebrate an album release three years in the making, as Songs About Mama, Trains, Trucks, Prison & Gettin’ Drunk finally sees the light of day after having been recorded in 2013. The band will celebrate at Linneman’s with Doghouse Flowers and The Glacial Speed, but first, frontman Bryan Thomas, guitarist Chris Johnson, drummer Patrick Tomter, and bassist Erv Tang sat down with Milwaukee Record to discuss mama, death, drugs, and the whole point of even putting out music when you’re just going to die anyway. Uplifting stuff!

Milwaukee Record: How psyched are you guys to finally have this record out? I know it’s been a long time coming.

Bryan Thomas: Yeah, it’s gonna be one month short of three years from recording to release.

MR: Have you kind of moved away from the songs in your set already?

Erv Tang: One of the reasons why it took so long was because we had to find a new drummer to play our songs with again. And you have to get everyone acclimated, and one of the ways to do that when finding new band members is to write new songs, so yeah, we have a whole new album written now.

BT: Well, the thing is, we recorded it on a Saturday, mixed it on a Sunday, and I think (former drummer) Chuck (Engel) left that Monday for DC. And then he lived in DC for a while, moved to New Orleans, lived there for a while, came back, and the album’s still not released!

MR: It’s tough to find a drummer in Milwaukee.

ET: It’s tough to find a drummer anywhere! You gotta find a somebody that actually fits, too—it’s not just about finding somebody that’s like, “Oh yes, I’m good at keeping a tempo!” You have to find someone that meshes with the people in the band.

BT: When you’re in your mid-30s, I know a lot of people who I used to play with who just don’t. They just stopped. In our early 20s, it was so easy to find people to play with, and now it’s like, everyone’s…

Chris Johnson: Well, I go to bed early now, I can’t go to practice until 2 a.m. and get up for work in the morning and be fine. Just getting too old to pull that off. (laughs)

ET: This sounds silly and vain, but we also had a hard time with the design. This is the first actual vinyl that any of us have ever been on, and releasing something on vinyl, you wanna put a little something extra into it. I don’t wanna just slap something together. 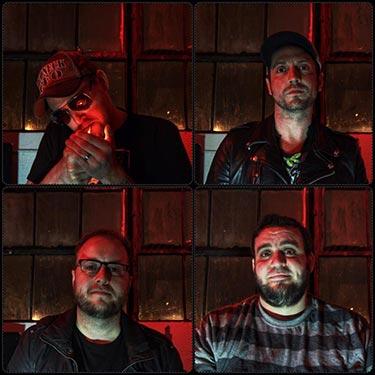 MR: What made you want to do vinyl this time? The first record was digital only, right?

BT: It was digital only because we blew our budget on recording.

ET: But we don’t talk about that. (everyone laughs)

MR: I think that’s a totally valid thing to talk about, though, because a lot of bands these days are struggling with that.

ET: Exactly. In this day and age, it’s so easy to say, “Well, I just call up Spotify on my phone, and I find this band right here.” Whatever, it’s cool. They just released this record. Not actually thinking that it cost this band upwards of a thousand dollars to record. You forget sometimes how much money gets invested in this before anyone even gets to look at it.

Patrick Tomter: I have a bunch of friends in bands who’ve released an album, but didn’t do a vinyl release, and it’s sort of like there’s one night where everyone’s excited that they released an album, and then it’s almost like the album doesn’t exist anymore.

MR: So let’s talk about the subject matter of the record. It’s country music, of course, and country music often has a dark edge to it. Is that what drew you to it in the first place?

BT: My mom raised me on country when I was a kid. So it’s kind of a homecoming, almost. I can remember being on tour with a punk band I was in and making them stop in Nashville between stops so I could shop at the Ernest Tubb Record Shop, and they were like, “You are a fucking idiot.” (laughs)

But I’ve always been drawn to really dark shit, too. My mom died when I was really young, and that sent me into this weird depression, and alcohol abuse and shit, and a lot of that comes out in the music, even though it’s twenty-five years later. The first song on the album is called “Hard, Hard Livin,'” and it’s summed up in this one line: “It’s hard hard livin’ knowin’ everyone you love has got to die.” You build all this shit up, and regardless of what you do, everyone you love and everything you do really means nothing. It’s a very nihilistic kind of thing, because in the end, you’re worm food. That sentiment runs through every single song on the album.

My wife and I were thinking about having a kid, and we do now, we have one and one on the way, but one of our songs, “Fever Taken Hold of Me,” is about trying to reconcile the happiness of childbirth with knowing you’re imposing a death sentence on that child that you’re bringing into the world, by virtue of bringing them into the world.

MR: It’s like the sentiment of bringing a pet into the world, like, “I brought this dog into the family,” and was it Louis CK who said you’re just telling your family you’re going to be sad in fourteen years? I’ve never heard that extrapolated to a human before.

BT: It is a really hard one to reconcile! Another song, “Bad Dreams, Cocaine & Whiskey,” the punk band I was in, our singer offed himself with heroin, and it was hard to reconcile that one too, because the entire time I knew him, he wanted to die. So when he finally did it, you know, we were all sad, but it was much more of a selfish sadness because we wanted our friend there. For him though, he finally got the ultimate end that he wanted. So “Bad Dreams” is about reconciling missing your friend, but also trying to accept that he is quote-unquote “happy” and that he wanted that.

MR: So what’s the point of a creative process, of even putting anything out if the fixation is on the point where it ends and nothing matters?

PT: Well, the music’s gonna outlive you, ya know?

BT: Right. It’s catharsis. Otherwise if I don’t put it down…it’s like people writing in journals or diaries. It’s like, hey, something’s on my mind, I’ve gotta get it out, and I get can get it out in a song, and it’s a weight off my shoulders. So it’s sort of a self-medication kind of thing.

ET: Going back to even asking why put anything out physically anymore when it costs so much. I wanna make sure that something I did at some point, somebody later on that I may have no idea who they are looks at it and says, “Oh, that’s cool!” And then puts it on and maybe has some type of connection to what one of us did. And then you sort of exist through them.

MR: You’re dealing with death by…

MR: That’s sort of the central point of art or doing anything creative.

ET: Yeah, to make a connection that outlasts you.

Liar’s Trial will celebrate the release of Songs About Mama, Trains, Trucks, Prison & Gettin’ Drunk Friday, February 26 at 9 p.m. at Linneman’s. Doghouse Flowers and The Glacial Speed will play in support. The cover is $5, or $15 with a CD.