Michael Gerlach builds beautiful things from nothing. As a woodworker, he transforms razed relics from Milwaukee’s industrial past into things like furniture and visual art. As King Courteen, the 22-year-old Riverwest singer-songwriter and pastor’s son constructs folk renderings known to captivate audiences using little more than the raw material of an acoustic guitar and his re-purposed choral background.

Whether in his wood shop or on stage, the lifelong Milwaukee resident—whom local music aficionados might recall from his contribution to Kiings’ “1984” last year—has fashioned a living with his hands and through his uncanny ability to make battered and discarded remnants gorgeous again. Before he puts those hands to work at Company Brewing on Friday night, Gerlach told Milwaukee Record about his Kiings collaboration, his passion for woodworking, his sacred music background, and how King Courteen got its name.

Milwaukee Record: Initially, my introduction to you was through Myles Coyne and the Breadking family. I know you from Breadfest and the Riverwest folk scene, but I feel like a lot of people happened upon you via the Kiings video for “1984” with WebsterX and Bliss & Alice. That’s a pretty varied mix of artists and influences. How did that song come together?

Michael Gerlach: I knew Kiings just from seeing them around. Sean [Foran] and I used to work together and used to talk about doing some collaboration. It was three years before that actually happened.

MR: And how did that collaboration happen? Were you just all in one room hashing out the song?

MG: Kiings had come to me months before, when they just had the instrumental. They asked if I wanted to be part of that and sent me another track. I don’t even know if I responded to that because I listened to it and was like, “This is cool, but I’m used to just a guitar and myself.” I didn’t even really know where to start with that. I had totally forgotten about that and then Bliis & Alice and WebsterX recorded their verses and they brought me into 88Nine. I was very unsure of what was going to happen. We just sat in a studio at 88Nine for four hours and came out with a rough mix.

MR: And you’re happy with the end result?

MG: So happy. That’s one of the highlights of the past two years playing music. I went there not knowing what was going to happen. I had never heard my voice with so much other stuff.

MR: As a guy who, as you mentioned, was playing as just you, your voice, and an acoustic guitar, did the boundaries you pushed with that song inspire you to incorporate different elements into your own music?


MG: Definitely. I think the folk stuff is still going to be a part of my music forever, but it was getting a little bit stale. I want to incorporate more stuff, but I still haven’t recorded anything. I was ready for some change, but I didn’t really know what it was. Coming out of that, I definitely want to do more collaborations.

MR: What are the parallels, if any, between your music and woodworking? Are there artistic elements of one that inform the other?

MG: I need a balance of the two. I’ve had music all throughout my life and when I graduated from high school, I didn’t really know what I wanted to do, so I went to woodworking school at MATC. I didn’t like it because cabinet-making was too clean, and I dropped out because I had started busking at the Public Market. I got a really good response from that and was just playing every open mic I could. Slowly, [woodworking] crept into my life more and more. I got a wood shop. I got a bigger wood shop and now, for the past six months, I haven’t really done much music. There’s a joy you get out of both that you can’t get from the other. I’ve gotten such a good response from woodworking. When I started doing it, I was selling a tiny coffee table here and there. Now I feel like people know about my woodworking more than they know my music. 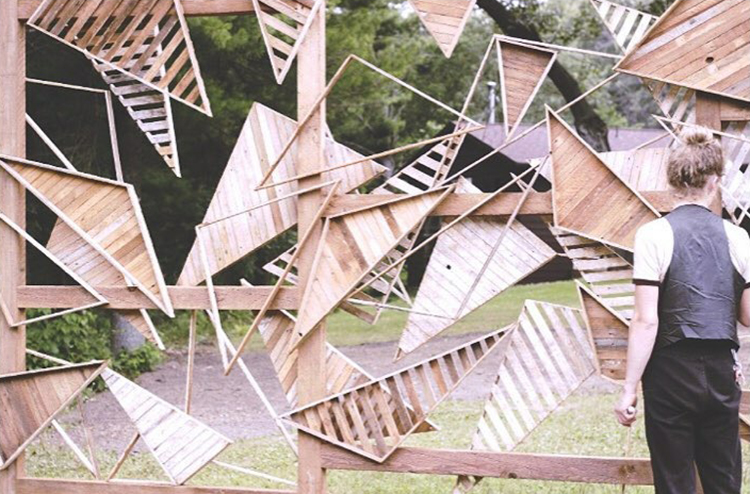 MR: I read an 88Nine interview from last year where you said you wanted to live in Milwaukee forever. As a person who grew up in Milwaukee, why is that?

MG: Well, I’ve been in Riverwest the last four years. It’s the first place where I really felt at home or felt ownership to. Every time I go to a bar or walk down the street, I see somebody I know. There’s a lot of people in the music community and all over who have a passion for this city and want to make it better. I could move somewhere and see if something might happen, but I would love to see more stuff happen here. And I have a big warehouse full of wood. I would have to get rid of that and that would take a while.

Another reason I want to stay in Milwaukee is that all the work I do is with reclaimed wood and reclaimed materials. Milwaukee is a hot spot for that. The name King Courteen comes from the Courteen Seed Building in the Fifth Ward. I became friends with this old man that owned the building and after he died, I spent a lot of time saving old things from that. I named myself after the friendship with that guy and my love for Milwaukee history.

MR: I think it was that same interview where you said you grew up in a religious household. Your dad is a pastor?

MG: Yeah. My dad is a pastor and so is my grandpa.

MR: In what ways did that exposure to sacred music and hymns influence your own music? Do you apply any of that to your own music or is it something you actively avoid doing?


MG: I don’t just come from a religious home. Both my parents are church musicians, they’re both organists, they both play piano. My mom directs the handbell choir and children’s choir. My dad facilitates and improves music in churches across the country. They had me and my three older brothers doing music early on, so I essentially had music teachers my whole life. I never really flourished in the trained aspect. I mean, I succeeded in it when I was a kid, but I never retained the theory knowledge. Different parts of my music come from a choral background, like the falsetto stuff in “1984.”

MR: Not really related, but with it being a new year, do you have any musical goals this year?


MG: Record. I still have yet to record anything. I feel like I need to because the style is changing. It’s not that I’m sick of that stuff, but I feel like once I start writing more, I’m not going to want to play any of that [old material] anymore.