The world is fast becoming a terrible place. Compassion is depleting at an astounding rate, as both economic and political divides widen more with each day of a polarizing presidency. Meanwhile, vital natural resources are fleeting, spirits are diminishing, and the concept of establishing a genuine human connection with anyone is pretty much a foreign concept to most of the populace on this irreparably damaged planet. In these dark times, Katy Perry is nothing short of a shimmering ray of light that’s never been brighter and who has never been more necessary to help illuminate the uncertain and often-frightening road ahead of humanity.

On a windy Monday night in December, Perry brought Milwaukee her rare and invaluable gifts of optimism in the face of adversity, encouragement to keep going, and a decade of material with the uncanny capability of making everyone temporarily forget about the world around them for a couple hours. The friendly force who’s won countless awards, performed a Super Bowl halftime show, and sold more than 100 million records over the course of her incomparable career came to the BMO Harris Bradley Center as part of her Witness tour.

As fans filed into the Bradley Center for what’s to be one of the arena’s last major concerts, a Christian choir leader with a bullhorn asked pedestrians outside “What will happen to you if you died tonight?” By the time Perry was through with her catalog-traversing two-hour performance, few if any of the 10,000 people in attendance seemed overly concerned with where they were headed, nor with the pain and hardship that permeates the world outside the venue. They had just witnessed something amazing.

After Canadian electronic duo Purity Ring ably set the table with a dreary-yet-danceable 35-minute opening performance, the curtain parted to reveal the superstar gliding toward the stage atop another star, where the former started the show with “Witness,” the club-caliber title track off her new album. After the star came in for a landing, Perry maneuvered between a pair of gigantic dice during another Witness cut, “Roulette,” before dancing with robots on a platform that would raise and lower during the entirety of Prism‘s “Dark Horse.” Perry did her due diligence to tout the new record early on with a version of “Chained To The Rhythm,” then dashed any doubts she skip the hits with a tone-setting rendition of “Teenage Dream” that prompted her first of many wardrobe changes.

The run of greatest hits continued with “Hot N Cold,” as Perry wore a light-up top with text that alternated between “HOT” and “COLD” while she strummed a pink flying V guitar and danced with two huge flamingo puppets. The top’s text soon turned to “TGIF” to match the start of “Last Friday Night (T.G.I.F.)” that came complete with two standing cartwheels from Perry down the winding catwalk. The flamingos flocked off and gave way to none other than Super Bowl standout Left Shark for “California Gurls” (and yes, Perry changed the lyrics to “Wis-con-sin gurls, we’re unforgettable…”).

We could go on with a song-by-song rundown of what Perry performed, what props joined her on stage, and everything she did that was awesome, but let’s just move to some of the highlights:

• Doing the splits after “California Gurls”
• Calling her mom, who made jokes about cheeseheads and polka
• Telling a young fan not to ignore her parent’s texts
• Riding a swing into the air, only to be eaten by oversized inflatable lips during “I Kissed A Girl”
• Artfully swinging around the stem of a gigantic rose along with an acrobatic guy named “Fernando” during “Tsunami”
• Being chased by a giant bug-type thing during “E.T.” as the backing band whaled
• Getting caught in a metallic Venus fly trap
• Strumming an acoustic guitar and leading a singalong of “Wide Awake” while sitting on a technicolor Saturn that was hoisted into the air and moved throughout the crowd
• Pulling a 12-year-old named Lauren out of the audience to make a wish on a star (FYI: the wish was for everyone to be happy)
• Stopping partway through “Swish Swish” to challenge “Brad The Dad” from Wauwatosa to a shooting contest on an oversized basketball hoop

As the show neared the two-hour mark, approached 20 songs, and topped half a dozen wardrobe changes, Perry brought a performance that was virtually flawless to that point home in the best way imaginable. “Roar” came with an inflatable tiger head and dozens of beach balls being released into the crowd. It led into a set-ending encore of “Firework.” When Perry belted the affirming chorus from the palm of a large hand amid a cascade of actual fireworks and cheers, the harsh and uncertain world beyond BMO Harris’ turnstiles didn’t seem to matter. The weighty question the evangelical with the bullhorn asked outside the arena wasn’t urgent. About 10,000 people got to spend a windy Monday night with Katy Perry and for two hours, all was right in the world. 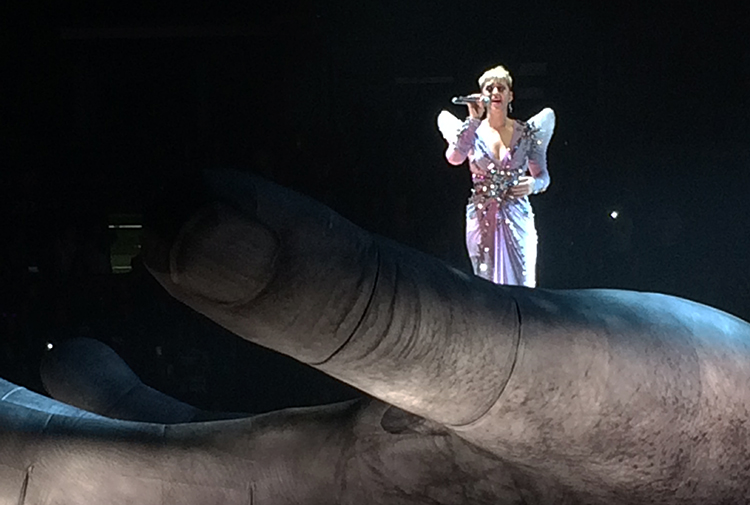