“This is where people usually walk out.”

The story behind Murray and Vogler’s collaboration is a simple one. The living-legend actor and the world-renowned cellist met on a trans-Atlantic flight a number of years ago, struck up a friendship, and eventually recorded the 2017 album New Worlds. Like the stage show, the album features Murray performing spoken word pieces from the likes of Whitman, Thurber, and Cooper; meanwhile, Vogler, violinist Mira Wang, and pianist Vanessa Perez perform selections from Ravel, Piazzolla, and Shostakovich. Toss in some Van Morrison (“When Will I Ever Learn To Live In God”) and some Lucille Clifton poetry (“Blessing The Boats”) and you have a left-field delight. 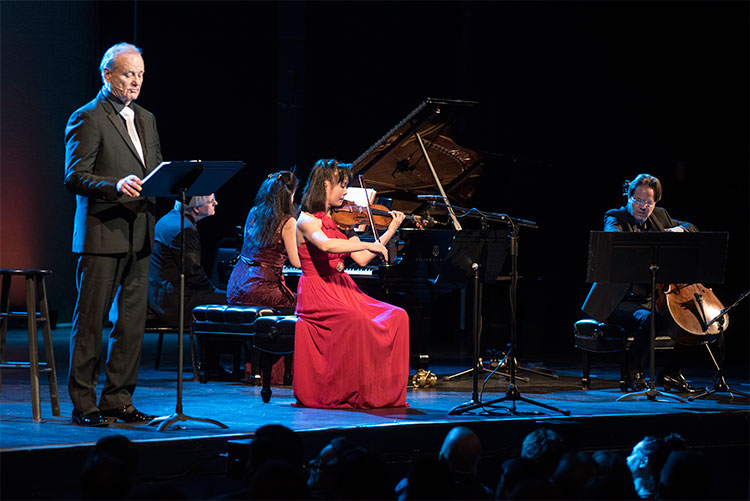 Tuesday’s show was all that and more. Opening with Murray reading from George Plimpton’s 1958 Paris Review interview with Ernest Hemingway—backed by some Bach, natch—the night was an embarrassment of riches. Murray sang “Jeanie With The Light Brown Hair” and acted out James Thurber’s parody “If Grant Had Been Drinking At Appomattox” (complete with a hilariously whiny take on the hungover Grant). Vogler and company turned in lovely performances of Piazzolla’s “La Muerte del Angel” and Shostakovich’s Allegro from Sonata in D Minor. Murray’s long reading of the “With Pascin at the Dome” chapter from Hemingway’s A Moveable Feast was a show-stopper, as was his performance of a crucial moment in Adventures Of Huckleberry Finn. The show only got looser—and decidedly more poppy—as it went along, culminating in a West Side Story medley that finally gave Milwaukee the chance to hear Bill Murray sing “America” in character. (Milwaukee being Milwaukee, there was no shortage of “WELCOME TO MILWAUKEE!” and “WAY TO GO BILLY!” bellows from the crowd.)

The show was billed at 105 minutes (with no intermission), but a slew of seemingly off-the-cuff encore performances took it just past the 120 mark. A moving rendition of “The Bonnie Banks O’ Loch Lomond” ended in a lights-up audience sing-along. “Angel From Montgomery” and “My Girl” made encore appearances, as did a reading of Lawrence Ferlinghetti’s “Dog,” and a Oscar-worthy take on Marty Robbins’ “El Paso.” In the final joyous minutes, Murray threw roses into the crowd—even whipping some into the upper decks.

Though clearly the main attraction, Murray was generous to his fellow performers, often standing in the shadows or sitting behind the piano while they played. His stage presence ranged from solemn to whimsical. There were plenty of moments of verbal and physical comedy—Murray plopping his butt on the piano during an un-billed performance of Tom Waits’ “The Piano Has Been Drinking”—but only near the end did it become the Bill Murray Show. “Not bad, but not really good, either,” Murray joked at the conclusion of “It Ain’t Necessarily So.” It easily could have been this scene from Ghostbusters 2:

Speaking of Bill Murray movies: There’s a scene in Scrooged when Murray’s character, cynical TV exec Frank Cross, berates his staff for creating a commercial for a $40 million holiday special featuring actor John Houseman reading from Charles Dickens’ A Christmas Carol. “You guys have got an ad with America’s favorite old fart! Reading a book! In front of a fireplace!” he exclaims. On paper, Murray and Vogler’s New Worlds sounds similar: America’s favorite old actor! Reading books! In front of a classical trio! Happily, Murray’s droll demeanor, his masterful interpretations, and his feel for the strange new worlds of America and beyond—coupled with the world-class playing of Vogler, Wang, and Perez—made Tuesday’s show anything but a bore.