UPDATE (2/22/19): After just over a year in business, African Garden appears to be closed. All exterior signage has been removed and windows are covered. Google Reviews also says the restaurant is “Permanently Closed.” You can read our original review of the unfortunately short-lived Somali restaurant below.

When thinking of dining on Lincoln Avenue, most folks probably equate the long Milwaukee thoroughfare with Mexican food—delicious, authentic Mexican food. From the delectable meats and tortillas available in the shadow of St. Josaphats Basilica at Don Lucho Carnitas to the gas station-adjoining delights Chilango Express serves up on the corner of 68th and Lincoln in West Allis, the metro Milwaukee artery is replete with outstanding Mexican establishments. Hell, there are even some Serbian restaurants and excellent bakeries scattered along the way. However, one thing Lincoln Avenue—and Milwaukee as a whole—lacks is a Somali restaurant. At least it did until this year.

On January 1, Mohamed Abubaukar and his sister Shams Nur—both born and raised in Somalia before moving to Milwaukee and opening a grocery store called Amana Halal Meat Garden of Eden on 10th and Mitchell—opened African Garden (1428 W. Lincoln Ave., 414-988-2994), with the knowledge that their adopted hometown had just one other Somali restaurant in its general vicinity. Wholly unfamiliar with Somali cuisine (like most of Milwaukee, we’d guess) and thoroughly intrigued by it, we stopped by the six-month-old restaurant to take a taste of eastern Africa and to see whether the newcomer adds to the quietly high-quality dining reputation of Lincoln Avenue. 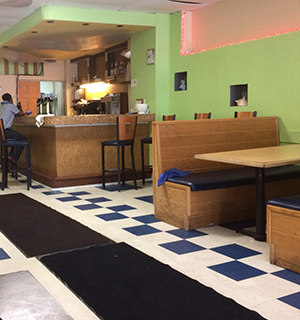 The space: If there’s one negative thing can be registered against African Garden, it’s the restaurant’s interior. The same thing could be said for almost any restaurant we deem to be Tucked Away, though. We’d by lying if we said we’d ever been to the previous occupant, El Botanero, when it was open, but it seems apparent little has changed. Outside, the “Restaurant” portion of the defunct Mexican predecessor’s sign remains, with an African Garden banner covering the rest.

Inside, El Botanero’s name and logo still greet diners at the front host station, which seems to just be a place where routers and other things are stored now. There’s more than a dozen booths and a small kitchen-side bar in the deceivingly spacious dining area. The lone television was showing a World Cup match (the volume of which served as the restaurant’s soundtrack) during our visit. We’re no interior decorators, but it seemed as if the blue and white checkered flooring clashed with the olive green and salmon paint job on the walls. To be clear, it wasn’t dirty inside as much as it was disorganized. Of course, as we’ve learned time and time again, absolutely none of that matters if the service and the food are both up to snuff.

Milwaukee Record‘s food: We were welcomed by Abubaukar himself, one of the three men on staff during a fairly light lunch hour. He presented us with a spiral-bound and laminated menu and took our drink order. We were intrigued by the Spiced Tea With Latte Milk ($2.50), which we found to be a rich mixture of nutmeg, milk, and black tea served in a disposable paper cup. Despite the summer heat, this proved to be a solid start as we pondered our entree. There are also smoothies, soft drinks, lattes, espresso, and Americano available, with nothing topping $3, and most items landing in the $2.50 range. 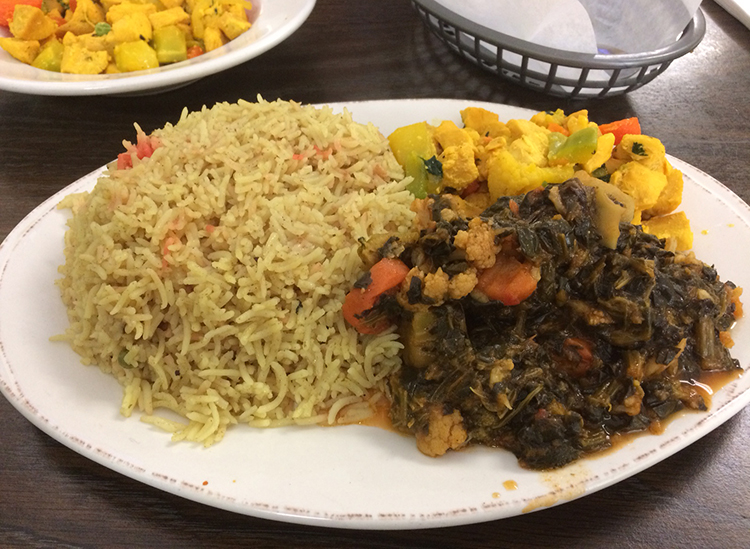 We were surprised to learn African Garden offers breakfast every day (except Tuesdays, when it’s closed) until 11:30 a.m. Arriving around noon, we narrowly missed out on that opportunity to try strawberry crepes and malawax, fuul bean dip, or Somali injera. Thankfully, the 11 chicken, beef, goat, and lamb offerings on the lunch menu held our interest. Eventually, the restaurant’s helpful and courteous owner patiently waited as we butchered the pronunciation of our order: Chicken Suqaar ($10) and a Bajiya ($1) on the side.

The Suqaar (above) was a blend of tender pieces of yellow-spiced chicken (we deduced saffron was present), a medley of vegetables—peas, corn, green pepper, broccoli, and boiled carrots—a heaping bed of Basmati rice with an interesting-yet-enjoyable sweetness that’s brought forth by either cinnamon or nutmeg. Customers have their choice of rice or noodles for every Suqaar dish. Our order also came with a sort of spinach slaw with vegetables and a vinegar-tinged tang that was a standout part of the platter. 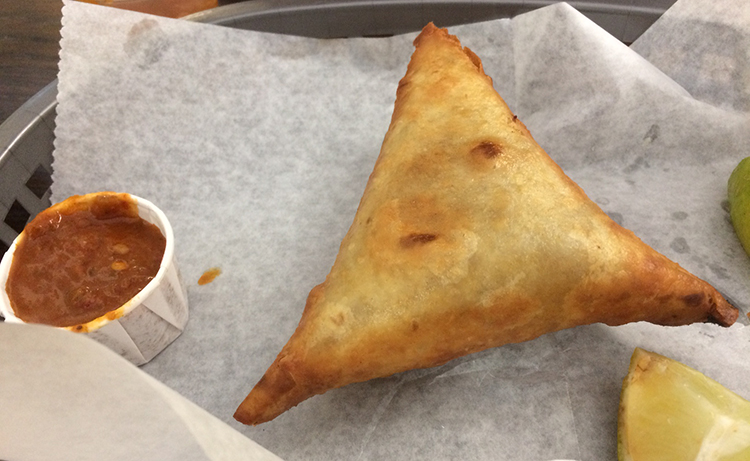 Once we made a dent in the Suqaar, we tore our Bajiya (above) asunder, finding the fist-sized ball of filo dough, dry ground beef, garlic, and pieces of diced green onion to be well worth the one-dollar gamble. It landed somewhere between a potato-less samosa or pastie and an African pizza roll on crack. When mixed with the thick, smoky, and red pepper-flecked sauce that came with it, it definitely earned a spot on our all-time dollar menu. The Chicken Suqaar and Bajiya seemed to be about par for the course in terms of ingredients. We also took home enough leftovers for a second full meal, all for less than $15 before tip.

The verdict: Other than potentially putting off a select few picky westerners with a couple goat-based dishes, nothing was too far out of the ordinary. Going into the experience virtually blind, we found that African Garden seemed to be a place where familiar ingredients were presented in a new way, then accented with unexpected spices and excellent sauces—all to great effect. Take a trip down Lincoln Avenue sometime and try Somali food. If you’re anything like us, you might not even know how much you’ve been missing it all along.