If you’re reading this article and you’ve spent any amount of time in Wisconsin, there’s a good chance you like cheese curds. Whether they’re breaded or battered, orange or white inside, or dipped in ranch or another sauce, the decadent dairy delicacy is an iconic Wisconsin appetizer that’s loved by many. Though they’re quite possibly the state’s most popular food, one Milwaukee woman has taken her love of deep-fried cheese curds to the next level.

Sam Buschman calls herself the Wisconsin Cheese Queen. She backs up that lofty title with her heroic efforts to chronicle and critique curds she’s tried throughout the state on her Wisconsin Cheese Please review site. Since starting the project just shy of two years ago, Buschman has weighed in on the credentials of curds from more than 130 establishments (the vast majority of which are in Wisconsin) and posted her findings on her website, along with accompanying videos on Facebook, Instagram, and TikTok.

Between her astounding volume of reviews to this point and her cheesy ambitions to venture to new places as her audience grows, Milwaukee Record figured it was a great time to learn more about the curd connoisseur behind Wisconsin Cheese Please.

Milwaukee Record: Can you walk us through the origin of Wisconsin Cheese Please? What prompted you to begin this ambitious venture of reviewing curds throughout the state?

Sam Buschman: When the pandemic hit, I was working in HR at Roaring Fork Restaurant Group. Within the first week of everything shutting down, I lost my job. Since I was unemployed, I was trying not to spend a lot of money, but still wanted to figure out a way to support people in the service industry. I gave myself permission to eat out once a week—so I had to make sure what I was getting was good. I chose cheese curds the first week and for whatever reason, decided to record myself rating them. I started making weekly YouTube videos and eventually moved over to Instagram.

MR: Why cheese curds? Did you notice a lack of cheese curd review sites? Are you just a huge fan of curds? Both?

SB: Well, the day I decided to do this, I simply wanted some good cheese curds. When I started posting the videos, I realized that there was not a lot of content around cheese curds in Milwaukee. I found fish frys, bloody marys, burgers…but no curds. So I figured, why not give it a shot?

MR: How has the site grown, developed, and evolved since you started it?

SB: It has grown a lot more than I expected it to. It started with weekly video reviews, but now I post at least three times a week. I work with local restaurants to promote their food and do giveaways. I’ve partnered with dozens of restaurants for giveaways for various occasions. I have even promoted things like pizza and waffles in an attempt to help businesses gain more traction. What started as simply rating cheese curds has evolved into a community of cheese lovers with a mission of supporting local businesses in Wisconsin.

MR: What makes a great cheese curd to you, and what are some things you think most of your readers and followers look for in their cheese curds?

SB: A great curd for me needs to have a good breading to cheese ratio. Not too much breading, but not too little either. They can’t be too greasy. The cheese has to be melty and have a good cheese pull—even better if it still squeaks. For the sauce, I look for a homemade ranch—extra points if it’s spicy. I poll my readers often on Instagram to see what kind of things they like and, for the most part, we agree on a lot. The biggest argument is always over marinara versus ranch. People send me their cheese pulls or recommendations of new places to try out and I love that.

MR: I know ranch is your preferred dipping sauce, but have you encountered other sauces—such as types of aioli, marinara, or other dressings—that have impressed you?

SB: Absolutely. To name just a few: Stubby’s in Milwaukee has a bacon Parmesan peppercorn sauce that is to die for. Heirloom MKE has a jalapeño ranch that is delicious. Lime Cantina in Cedarburg has a spicy pineapple sauce which is very different but extremely good.

SB: Dyckesville, Wisconsin is the furthest I’ve gone. It’s a bit north of Green Bay. The curds were from the local bowling alley and honestly it was worth the drive. They did not disappoint.

MR: Out of the 100-plus places you’ve reviewed so far, what are the best cheese curds you’ve had? Why?

SB: This is controversial and honestly has gotten more difficult as time goes on because I have had so many good curds. The best so far are from Bonfyre Grille in Madison. They had a perfect breading-to-cheese ratio, an awesome cheese pull, and they were served with an absolutely delicious spicy ranch.

MR: What are the most unique curds you’ve had so far, and why?

SB: Two different curds come to mind. Black Sheep in Milwaukee has pancake battered cheese curds that are served with syrup. Trust me, it works. Tavernakaya is a Japanese spot in Madison that serves cheese curds on a stick covered in spicy mayo. Not something you would expect, but they are delicious.

MR: What are some of your goals for the site, both in the near future and in the long-term?

SB: I would like to venture to more restaurants in Wisconsin, and even neighboring states, to try curds. I have always had the goal to do a cheese curd review with Charlie Berens from Manitowoc Minute. Fingers crossed that happens this year.  I also want to branch out a bit to try more fresh curds and tour some dairy farms throughout the state.

MR: Any particularly special or faraway places you’re planning to hit up for a review soon?

SB: I am heading to Curd Fest in Eau Claire at the end of June and I am extremely excited about that. I plan on reviewing as many curds as I can out there.

SB: Have any cheese curd recommendations? Send them my way! 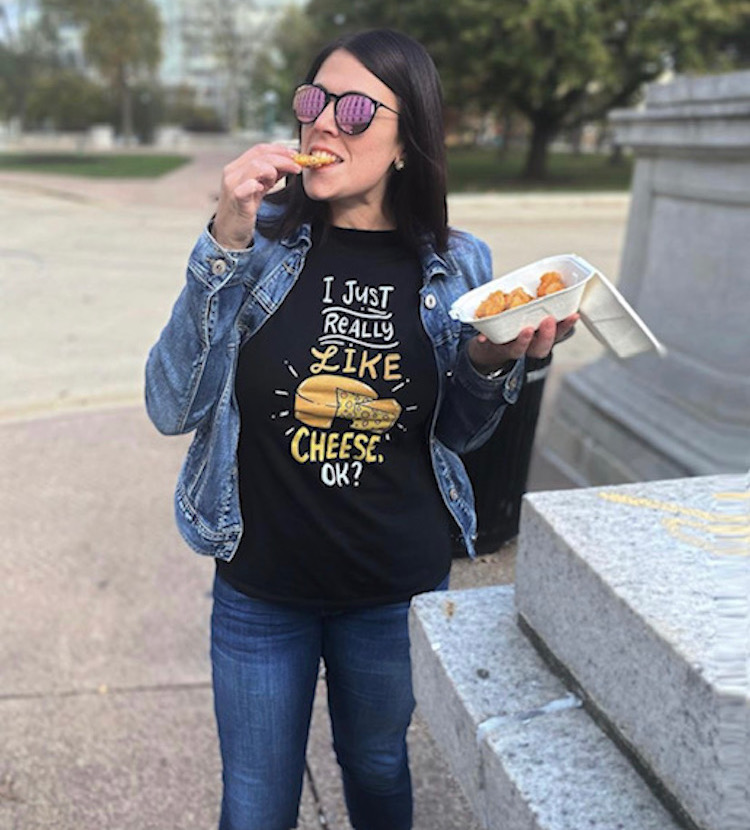