In the whiz-bang and artery-hardening world of fast food, there exist magical places known as test markets. These are cities, or sometimes entire states, that are frequently graced with new fast food menu items before said new fast food menu items are introduced to the world at large. So, say, when someone at Taco Bell gets the bright idea to make something called the “Bell Beefer,” or McDonald’s sets its sights on the meat-abstaining Catholic crowd with the Lent-tastic Hulu Burger, only a select few markets are tasked with the quest of serving those items and assessing their viability. For every successful test item (McDonald’s breakfast!), there are countless failed ones (McDLT!) Columbus, Ohio is a popular test market, for some reason.

Back in the ’90s, I experienced the joys of test markets and items when my hometown McDonald’s was chosen as an official purveyor of McPizza. Yes, for a brief, wondrous time, one could hump on over to Mayville, Wisconsin, walk into the brand-new McDonald’s—located between the local Piggly Wiggly and a restaurant called Bumpy’s—and order an honest-to-god pizza. Well, one of those little six-inch pizzas, anyway. Though long since relegated to the ’90s nostalgia dustbin—currently overflowing with Widget the World Watcher pogs—there are still a few McDonald’s serving pizza in the 21st century.

Which brings us to the present day. And cheese curds. On Monday, November 21, McDonald’s dropped the tasty, bite-sized, and deep-fried bomb that beginning now—right now!—all of its Milwaukee-area locations would begin serving cheese curds. The rest of Wisconsin would follow a week later, on Monday, November 24. Made with real Wisconsin cheese, these little beauties would be available via the McPick 2 for $5 menu, and only for a limited time. In the realm of surprise announcements, this ranked somewhere between Beyonce’s Lemonade and the time Zack told Screech he was dating Lisa Turtle on Saved By The Bell.

So, following a weekend that found me driving a total of 450 miles for the opening of Wisconsin’s gun deer season (nothing this year!), I hopped back in my car Monday night and drove to my neighborhood McDonald’s. In search of cheese curds. And sure as shit, there they were, prominently featured on the drive-thru menu along with the usual fare of quarter pounders and those fancy chicken sandwiches no one ever orders. Because I was tired, hungry, and felt weird ordering only one box of curds, I tossed in a second box and a Johnsonville brat—the Tic Tacs to my original cheese curds’ box of condoms, as it were. Also, when did McDonald’s bring back Johnsonville brats? What a delightful/awful time to be alive. 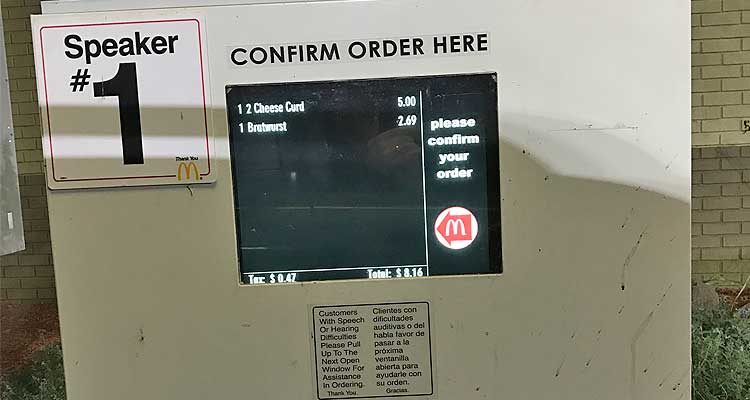 Back home, I cracked open the Packers-branded boxes (“Just so tasty”) to find, well, some pretty decent-looking food things. There were 14 curds in the first box I opened, and 20 in the other. I briefly entertained the idea of doing an “unboxing” video, but quickly remembered that life was short, everyone I loved was growing older by the second, and the little tripod for my phone was back at the office. 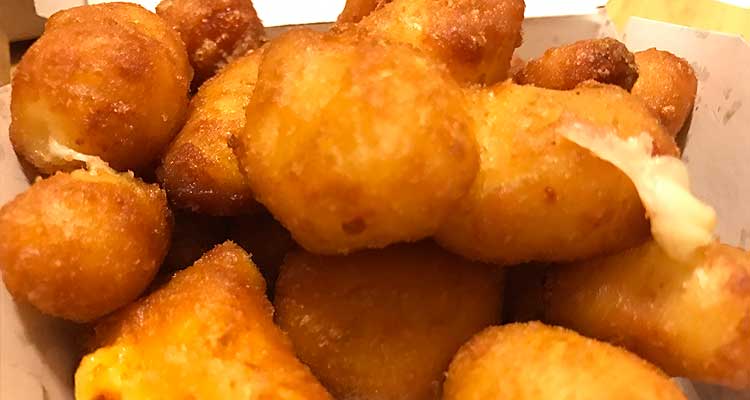 I tried a few. And, well…is it too easy to say they tasted exactly like you would expect cheese curds made by McDonald’s to taste? Because they did. The cheese had only a hint of squeak and the batter was a bit on the greasy side, but they were perfectly acceptable Wisconsin cheese curds. Ditto the brat (available since April, apparently). It was missing the snap of a fresh brat and the bun was uninspired at best, but it was definitely a Johnsonville. I finished off one box of curds, wolfed down half the brat, shrugged, and went on with my life. Yep, McDonald’s has cheese curds now, and they’re okay.

It can be easy for lifelong Wisconsinites to forget that, much like supper clubs and casual alcoholism, cheese curds are largely unique to the state. They’re not cutesy specialty items or ironic party favors, they’re regional delicacies, facts of life. They’re also available practically everywhere, from Vanguard and Culver’s to the State Fair and the grocery store. So why buy them at McDonald’s? Well, why buy anything at McDonald’s? Because McDonald’s restaurants are also everywhere, that’s why.

But maybe there’s more. Maybe, much like my McPizza memories or the time Arby’s served deer venison burgers for five minutes, there’s something strangely thrilling about being fast food guinea pigs. Plus, in an industry that’s hyper-homogenized by design, a little novelty goes a long way. So thank you, McDonald’s, for taking a chance and giving the proud people of Wisconsin what they want. Your cheese curds may not be as revolutionary as the time you kept the hot side hot and the cool side cool, but dammit, they’re pretty decent. And, more importantly, they’re ours.