Though bar turnover isn’t at all uncommon in Milwaukee, the city actually boasts a respectable number of watering holes that have stood the test of time. Even if the city has seen thousands of drinking establishments come and go over the years (and some of them aren’t even on North Ave.!), places like Uptowner (opened in 1884), White House (1891), Holler House (1908), and Wolski’s (1908) carry on to offer locals and tourists a clear glimpse into Milwaukee’s rich drinking past. 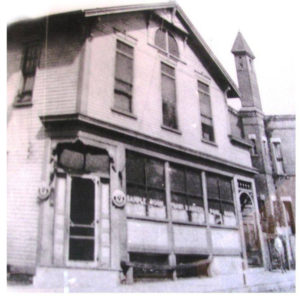 While Milwaukee has seen a wealth of bars that have stuck around for generations, not many local bars have outlasted Puddler’s Hall. Well, just one bar has, to be exact.

In town, only airport-adjacent Landmark Inn (1847) is older than Puddler’s Hall (2461 S. St. Clair St., 414-747-9005), which originally opened in 1873 to serve as a union hall for Milwaukee Iron Company’s puddlers and boilers. At the time of the tavern’s opening, Wisconsin was just 25 years into its statehood, Miller was still a relatively new brewery, and Prohibition was still close to 50 years from being the law of the land.

About 20 years after opening, the Bay View union hall was sold to Falk Brewery and was to exist as a tied house. Falk burned down months later and its assets were sold to venerable Pabst Brewing Company.

Shortly after Prohibition came in 1920, the subsequent Pabst tied house was sold and became Barbieri’s Dance Hall, a rumored speakeasy that was allegedly equipped with a liquor drop and a tunnel to smuggle contraband to other nearby businesses. Along the way, the bar’s back room was added to accommodate dancing. After Barbieri’s called it quits in 1979, the building went through a few different owners and existed under names like Potter’s End, Mardee’s Party, and Sue’s Bay View Bandwagon before finally reopening as Puddler’s Hall in 2002. 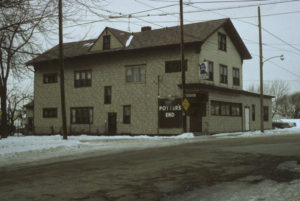 After the bar briefly closed in 2010, Puddler’s was revived the following year by Casey Foltz, an IT professional with no previous bar experience. Foltz, a Bay View resident, admits he’d never been to Puddler’s Hall before looking into the possibility of acquiring it.

“When I first got involved, I had been home brewing a lot, and I was looking around for place I could do that on a larger scale,” Foltz says. “We saw that this place was for sale and I was interested in turning it into a brewpub.”

Foltz immediately recognized the bar’s long and illustrious past, but also knew it would be far from a turnkey operation. He says numerous updates were necessary to get Puddler’s back in business, and his brewpub plans were shelved indefinitely.

“When we first walked through, I really liked the history of the building. But there weren’t any TVs, there wasn’t furniture, and all the sinks behind the bar had been torn out,” Foltz says. “So there was a decent amount of work that had to go into the bar before opening it up.”

In the five-plus years since reopening Puddler’s, Foltz has worked hard to gradually move the bar into this century—or at least the latter part of last century—and rebuild its reputation as a friendly neighborhood tap. One year ago, he also bought out his partner, Cele Stepke, and became the business’ sole proprietor. Foltz’s efforts are evident to the bar’s staff, including Bret Stepke, who is Cele’s son and a bartender at Puddler’s.

“I think it kind of appeals to all demographics. I think Casey wants it to be comfortable enough to be a nice dive bar,” Stepke says. “At the same time, we get a bunch of people coming here from Goodkind and some of the other nicer restaurants in the area. I think that was kind of intentional to not pigeonhole a certain group of people who come in here.”

The changes are gradual, but instrumental in helping to modernize the business in 2017, instead of merely relying on the 1873 identity. Each month, Puddler’s now hosts a veteran’s group. There’s trivia every Monday, guitar club on Tuesdays, a Thursday table tennis league, occasional cribbage tournaments and concerts, and a newfound commitment to being a place to watch hockey. Free food is available at all Packers games, and in-house Foltzy’s Pizzas (made by his brother) are available daily.

Benefit shows aren’t at all uncommon, and from 11 a.m. to 1 p.m. on the first Sunday of every month, Foltz empties Puddler’s eponymous hall and hosts a “Child’s Play” event for parents who wish to bring their children in to run around. Sometimes, magicians and other children’s entertainers are hired for the event.

“Everyone is welcome, be it local veteran Ray or local punk Juan from the Size 5s,” McCain says. “No one judges, and the bartenders are fantastic.”

While looking to the future of his business, Foltz—a self-proclaimed history buff—is also doing his best to pay homage to the past, even down to keeping the bar’s name intact.

“We have a name that represents that history,” Foltz says. “What could I change it to that would be better than that?”

As Bay View experiences rapid change, the arrival and departure of trends, the influx of new businesses, and growing claims of gentrification, Puddler’s Hall will remain a neighborhood treasure and a welcoming beacon that’s visible from a highway it predates. Throughout the various names, owners, business models, and the changing tastes of generations upon generations of locals, the weathered structure on the corner of Potter Avenue and St. Clair Street will outlive us all. At least if Foltz has it his way.

“I own the building now, but this is a 140-year-old building. It’s been around so much longer than I have, and hopefully it’ll be around longer than I’m alive,” Foltz says. “I’m more of caretaker to the building than I am an owner.”