“Contemporary Midwest cuisine.” The chosen style of cuisine served at the new Birch + Butcher (459 E. Pleasant St., 414-323-7372) feels as amorphous and open a concept as the space the restaurant occupies. The words invoke images of ample pabulum that’s both comforting and familiar. Warm and pointedly soothing dishes meet their apex in the food world’s most enviable platitude: “like mom used to make.” If that is the mission being carved out at Birch + Butcher, then what can be done to set apart the concept whose success is so wrought in its own familiarity? If it isn’t, what is being done to make Midwestern cuisine contemporary? With winter breathing down our necks, we trudged in to get with the program of what’s popping off on Water and Pleasant streets.

The space: There is a lot about Birch + Butcher that tells you to let the food speak for itself. This isn’t to suggest that there is anything offensive or off-putting in the way the restaurant presents itself; quite the opposite in fact. Nestled in the comically-named DenimPark complex on the north corner of Pleasant and Water, Birch + Butcher is itself a nesting doll of culinary enterprise. Guests enter to the cozy sight of a modestly sized-but-excellently stocked butcher shop that serves as something of a visual amuse bouche so tantalizing that it almost deadens the beckoning host ready to take you to your table. The mystique of archetypal comfort dissipates almost immediately as soon as one enters the dining room. There, patrons will find substituting intimacy instead for a bustling, expansive dining room. To the right, there’s a spacious expo kitchen where interested diners get to see how the sausage is (literally) made.

For better or worse, the aesthetic of the restaurant is almost refreshingly lacking in anything remarkable and, as a byproduct, feels remarkably smooth. Sure, you could say it’s been done; the bright, clean, big room filled with all things neutral and gray. This isn’t the basis for a complaint. It’s elegant, stately, and doesn’t beat its customers brows with a screaming concept. The main accents breaking the restaurant’s subtle countenance are tokens of admiration to those who have served as mentors to the chef. Cookbooks placed, as if by chance, along the walls make the big room with the hard floors feel almost lived in. Another charming note are the construction markers denoting the restaurants newness that beg the diner to ask whether they were left with intent or were a happy-accident-turned-droll-effect. 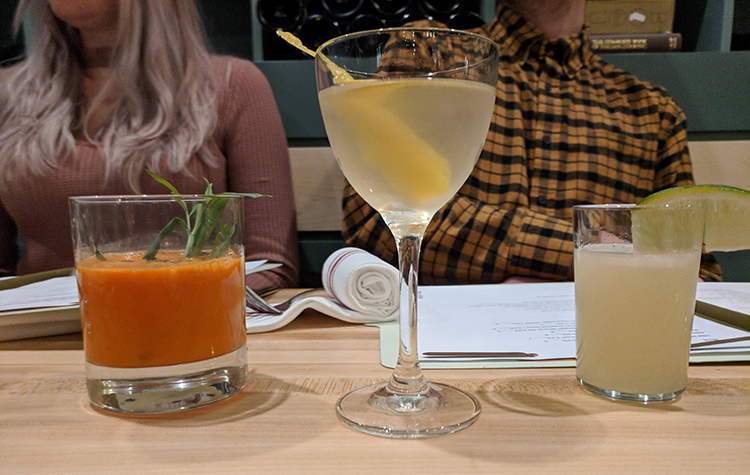 Milwaukee Record’s food: A charming accent to Birch + Butcher is the menu presentation. Tucked into the kind of binder you’d find a detective’s file cabinet is the dinner menu. The menu is split up into four categories: “To Start,” “Side Dishes,” “Main Dishes,” and “Platters.” Our plan of attack followed that pattern, but first, cocktails. Sadly, trying three of the 10 listed was an exercise in disappointment. The #7 (top left) featured the bold combination of rhum agricole, carrot and lemon juice with tarragon and peach bitters, but it  just didn’t marry at all. Instead, the palate was steamrolled by the dominant flavor the carrot juice. Our #3 (center) had a mix of Pear Eau De Vie and mezcal with lemon juice and and ominous “sweetness” that unfortunately served as a cloying essence that overtook the usually-fierce flavor of mezcal. It should be said that the #9 (right), an aquavit and vermouth drank, contrasted the others as a triumphant aperitif. 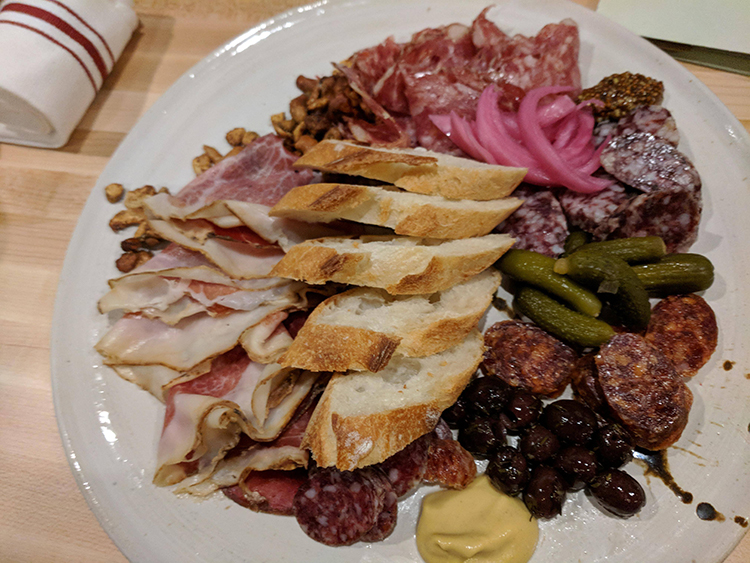 It felt only necessary, having trekked through the sensory forest of meat and cheese it took to get to our seats, to start with a charcuterie board. Thanks in part to a happy accident, we ended up with two platters, one meat and one cheese, both with the classic accoutrements of olives, cornichons, and pear. The hurried food runner didn’t elaborate as to exactly what was on the boards (easily forgivable, given the restaurant being in its infancy), and while there truly wasn’t a bad bite on either board, it was without question that the mammoth slab of Humboldt Fog; a bloomy, sumptuous wedge of nirvana that took the crown. 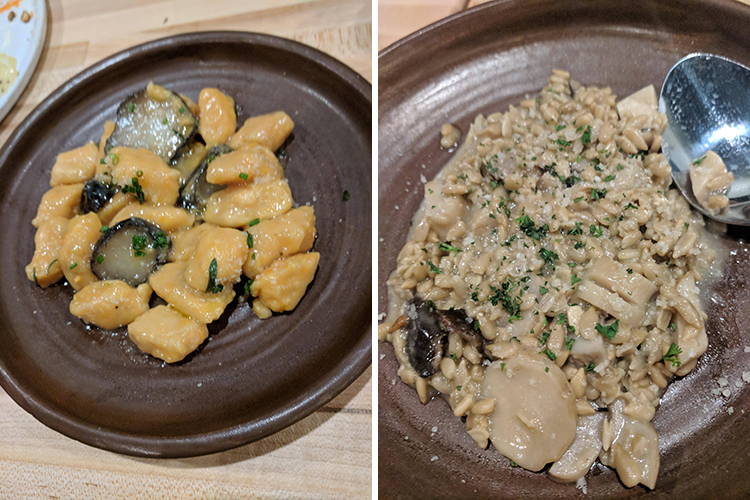 As we feasted on the last of our sourced victuals, our earnest server returned to talk us through the small plates. The already-beloved sunflower seed risotto with king trumpet mushrooms was ordered, as well as barbecue parsnips, butter poached celeriac, french onion stuffed leeks, and sweet potato gnocchi. Yearning as every Wisconsinite does for the analeptic kiss of fall flavor, the gnocchi ended up being a bit of a let down. Overworked dough and a lack of flavor left us wanting something more. The parsnips and celeriac stood up quite well as unpretentious odes to the comforting simplicity of the root vegetable. 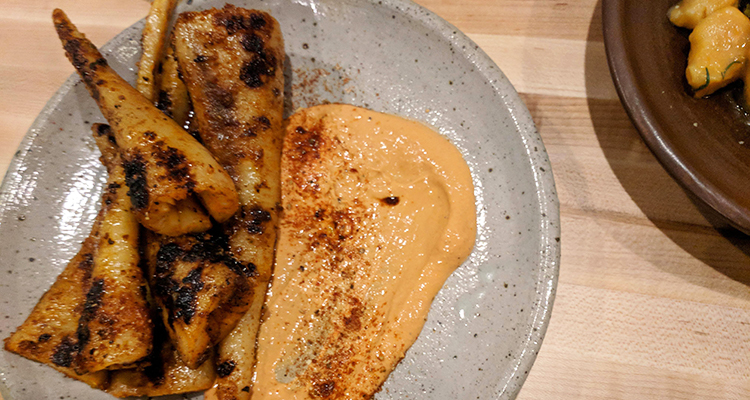 Risotto can be a dangerous dish to toy with, as it is historically finds its failure quite often when put into the earnest hands of bored revisionists. Thankfully Birch + Butcher did justice to the dish, tweaking it to live simultaneously in the realms of “captivating” and “familiar.” The weight of the small plates in us, we plowed on to one main dish and one platter, a butter poached steelhead trout and a New York strip steak. The table’s unanimous adoration fell to the trout, finding the steak to be well-prepared but unremarkable, especially by comparison. The steelhead was presented as a modest fillet that was topped with speck and a bracing parsley and onion salad, which served as a sort of salsa verde. The result was a bit of a joyride of taste finding texture and vice versa. 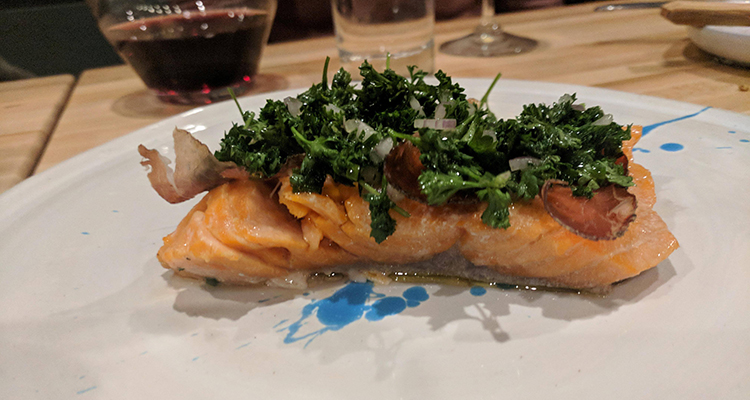 The verdict: Experiencing the embryonic stages of any restaurant can invoke any number of emotions: dread, confusion, lament, and emptiness are likely to pop up on that list. With Birch + Butcher, the feeling we left with was eager anticipation. From walking in to stumbling out, the one consistent element of the restaurant’s essence was ambition. Yes, it’s fair to say there were some swings and misses, but the imperfections never veered into the territory of perceived ambivalence. If Birch + Butcher’s palpable ambition holds, it will grow to find itself a meaningful force for Milwaukee’s food scene.