Originally started as an extremely small brewery in a glorified closet in the Lincoln Warehouse back in 2013, Enlightened Brewing Company‘s reputation and its footprint have both grown considerably in recent years. After opening a cozy taproom and expanding its brewing output to a spot on the ground floor of the Lincoln Warehouse in 2016, Enlightened relocated to a far more spacious brewery, taproom, and events space in the former Louis Allis Motors plant at 2020 S. Allis St. in Bay View in May of 2019.

On Saturday, August 13, Enlightened Brewing Company will keep the seasonal celebration rolling with its “Summer Block Party” event. In addition to the taproom having its normal hours (noon to midnight), the fun will also spill out onto a parcel of Allis Street in front of the brewery beginning at 3 p.m. until 10 p.m. Food vendors—Sweet Smoke BBQ, Awe-sauce hot sauce, Happy Joy Candy Floss, and Creme de Liqueur ice cream—will be serving up meat, heat, and sweets all day long. For the four-legged block party attendees, Woofbowl, a Doggy Food Truck, will be on-site to offer “fresh and healthy food truck treats for dogs.” There will be live music from a funk band called Aaron Brenton’s Shutter Step and High Tide (a band featuring an Enlightened employee in its ranks).

And it wouldn’t be a brewery block party with some new beer releases. In association with this event, Enlightened will release three new session pale ales as part of its “Rough Draught Series.” This time around, the brewery collaborated with Bigshot Robot, who helped “design and direct” the trio of new brews that will be available in limited six-pack quantities. There will also be many of Enlightened’s year-round sudsy standbys available both on tap and in cans.

The Summer Block Party will happen rain or shine. In the instance of bad weather, the music and vendors will move inside Enlightened’s spacious taproom. Be there! 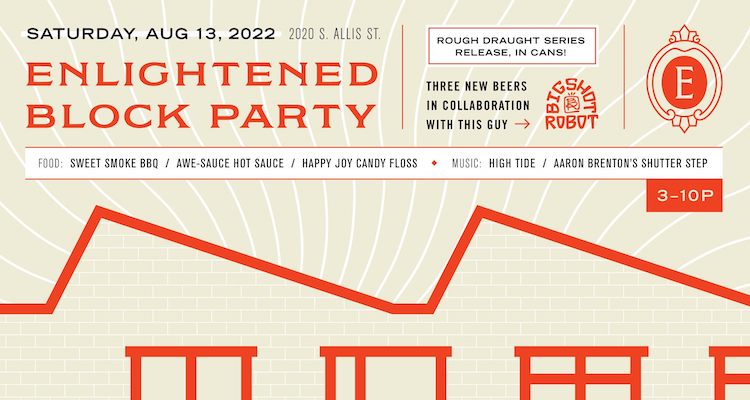