Here in the land of the grill, taking the extra steps or time to get into full-blown barbeque (or barbecue, if you prefer) is a journey many leave untraveled. Some might say that it’s not worth all the effort when you could easily stop by Speed Queen, Ashley’s, Saz’s or any number of other local places that offer quality BBQ or BBQ-adjacent fare. Fair enough! Similar to homebrewing, however, we’d argue that there’s much to be gained from taking the time to do some slow-and-steady smoking at home to discover and create the BBQ flavors you perhaps didn’t know you needed in your life.

We recently spoke with Mike Luce of Barbeque Supply Company in Greendale about the (hopefully) growing trend of home BBQing in the Milwaukee area. He has thoughts on why some people are hesitant to shift from quicker grilling to slower smoking, and some suggestions on how to best make the leap. Should his thoughts on the matter convince you, we’ll be expecting an invitation to your next cookout.

Milwaukee Record: What made you get into barbequing as a means of cooking in the first place?

Mike Luce: I got into barbequing because I was too lazy to go to a restaurant. And then I realized that as someone who cooks and grills a lot, that I could probably do it at home and I don’t have to get out of my PJ’s. The first barbeque I made was terrible, but I had something in my mind that I wanted to make so it was keeping a log and changing things and trying to do it right.

MR: Was it a sudden shift from grilling to barbequing or a more gradual one?

ML: A little of both. I’m a person who dives headfirst into whatever I get into and I try to learn everything about that specific subject. With barbeque, there’s a lot to know—it’s a wide and deep ocean—and the only way to make good barbeque is by making a bunch of mediocre barbeque. But at the end of the day, you still get to eat it and it’s always enjoyable.

MR: It’s a slow process but you can get into it pretty quickly, if you want to and if it fits your lifestyle.

ML: Right. The other thing I really like doing is hanging out while it cooks. Barbeque is never as good when you make it for yourself as it is when someone else makes it for you, so having friends come over to hang out while it’s cooking and then enjoy it when it’s done is just the magic of it. That’s where the alchemy really happens. Typically it involves beer, which is why I’m kind of shocked that barbeque in Wisconsin hasn’t taken off more than it has. I don’t think there’s a better activity that accompanies beer drinking than barbeque. 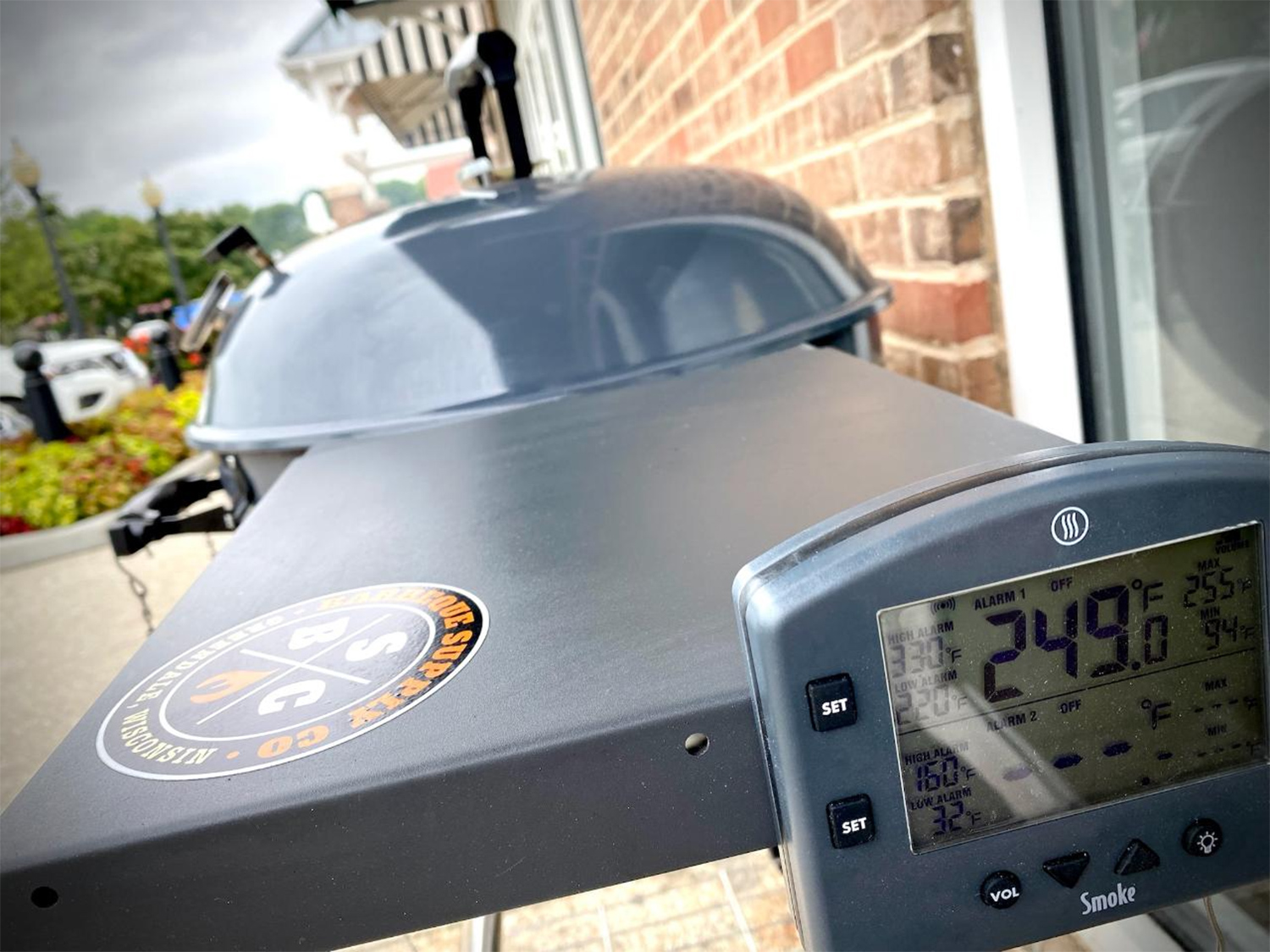 MR: What are the major differences between grilling and barbequing?

ML: Well, a grill is between a bumper and a hood on a Buick. Or in Paul Wall’s mouth. But no, think of grilling as what you do on a stovetop in your kitchen—searing hot and fast. You’re not really putting in smoke flavor while you’re cooking. Barbeque, on the other hand, is more like cooking in your oven at home and it’s typically done over live fire. You’re allowing your protein to soak up smoke flavor and it usually takes longer to roast.

ML: It depends on what level of involvement people want to do. Pellet grills have made it possible for people to set things up and walk away, but if you have an old Weber charcoal grill at home, you can turn out some really good barbeque on that. It’s just keeping the heat source away from your protein and throwing in some wood chunks to get that flavor. It’s actually pretty easy to do it that way. You can cook ribs on a kettle grill and they turn out amazing.

MR: So, they can use the same kind of heat source—just Kingsford charcoal or whatever—and that can be how people get into it? 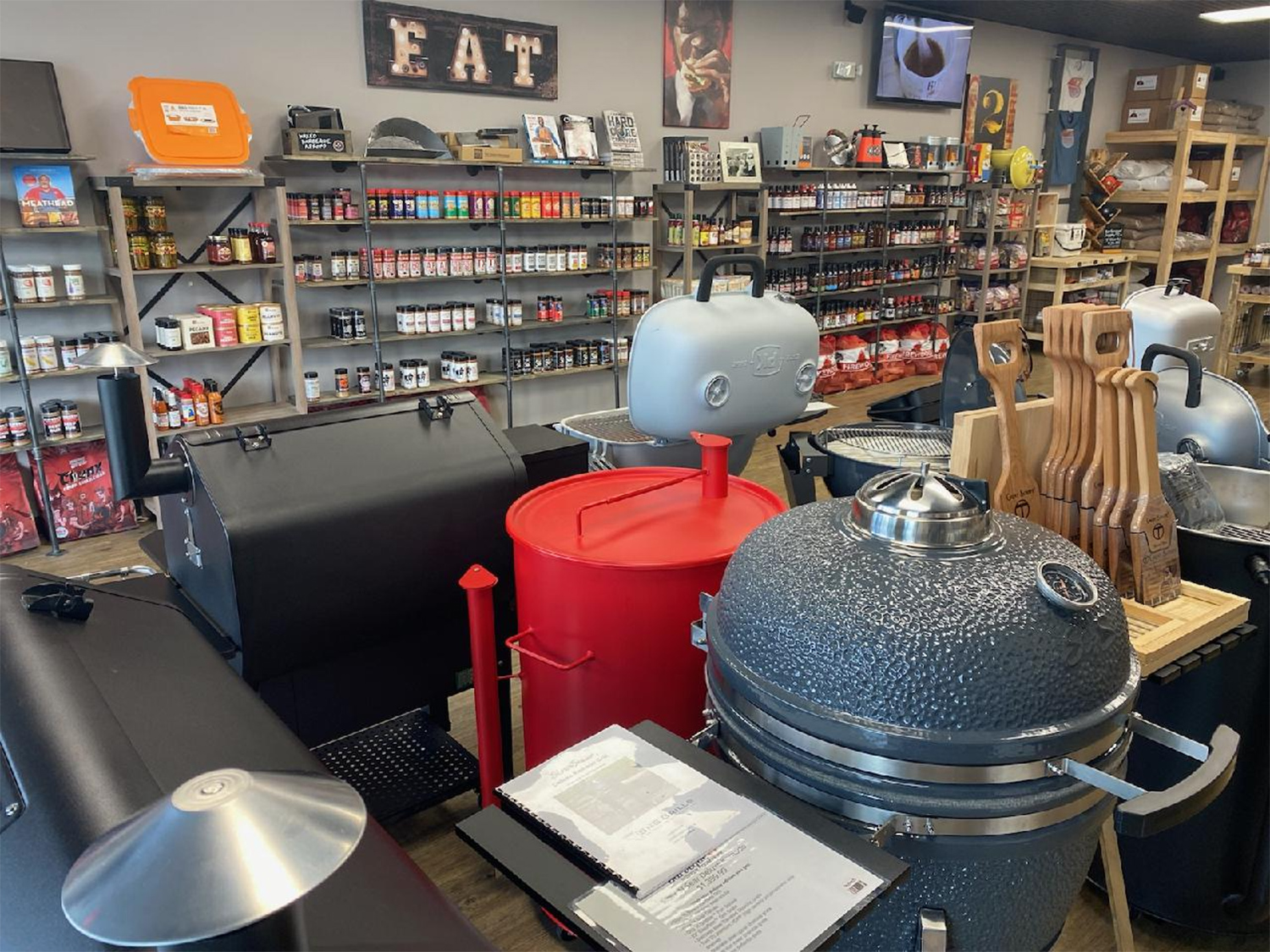 MR: Beyond knowing that it’s a process and hard to perfect, what are the barriers people have to getting into barbeque?

ML: It’s an intimidation. If you go in thinking you won’t be able to make it taste how it does in the restaurant, you’re setting yourself up for failure. If you say you’re going to try something and experiment and eventually get it right, you can do it. That apprehension and that fear translates onto your food.

MR: Like how people get so afraid of over-seasoning that they under-season their food?

ML: Exactly. And with the internet now, there are so many resources like YouTube that can walk you through the process to make it as simple as possible. But it’s a double-edged sword in that there’s so much information that it can be difficult to figure out what’s best for you. The best thing to do is to keep a journal and find out what works. What temperature are you running? What fuel source are you using? What rubs and seasonings are you applying? And then what are your results? Are you happy with it? What would you do differently in the future? As stupid as it sounds, it works. And when you nail a recipe and you’re really happy with it, you have a reference to go back to and that’s worth its weight in gold.

MR: What are the best ways for people to determine their own barbeque preferences so they know what they might want to try at home?

ML: I would start with this: think about the best barbeque you’ve had and what that was like. Was it a vinegar-based sauce or was it a sweeter sauce or maybe a fruit-infused sauce? Was the rub salty or sweet or a little different in some other way? Determine that and try to find something similar. But also go to restaurants and go to people’s houses and try their stuff. If you come here, we’ll have you taste stuff and see what you like, too. Flavor is so subjective and one size does not necessarily fit most.

There’s no shortage of barbeque out there to try at local restaurants and food trucks. And if you’re out of town, find out what the best local barbeque is. If nothing else, you’re going to get a little local flavor of what they’re doing. 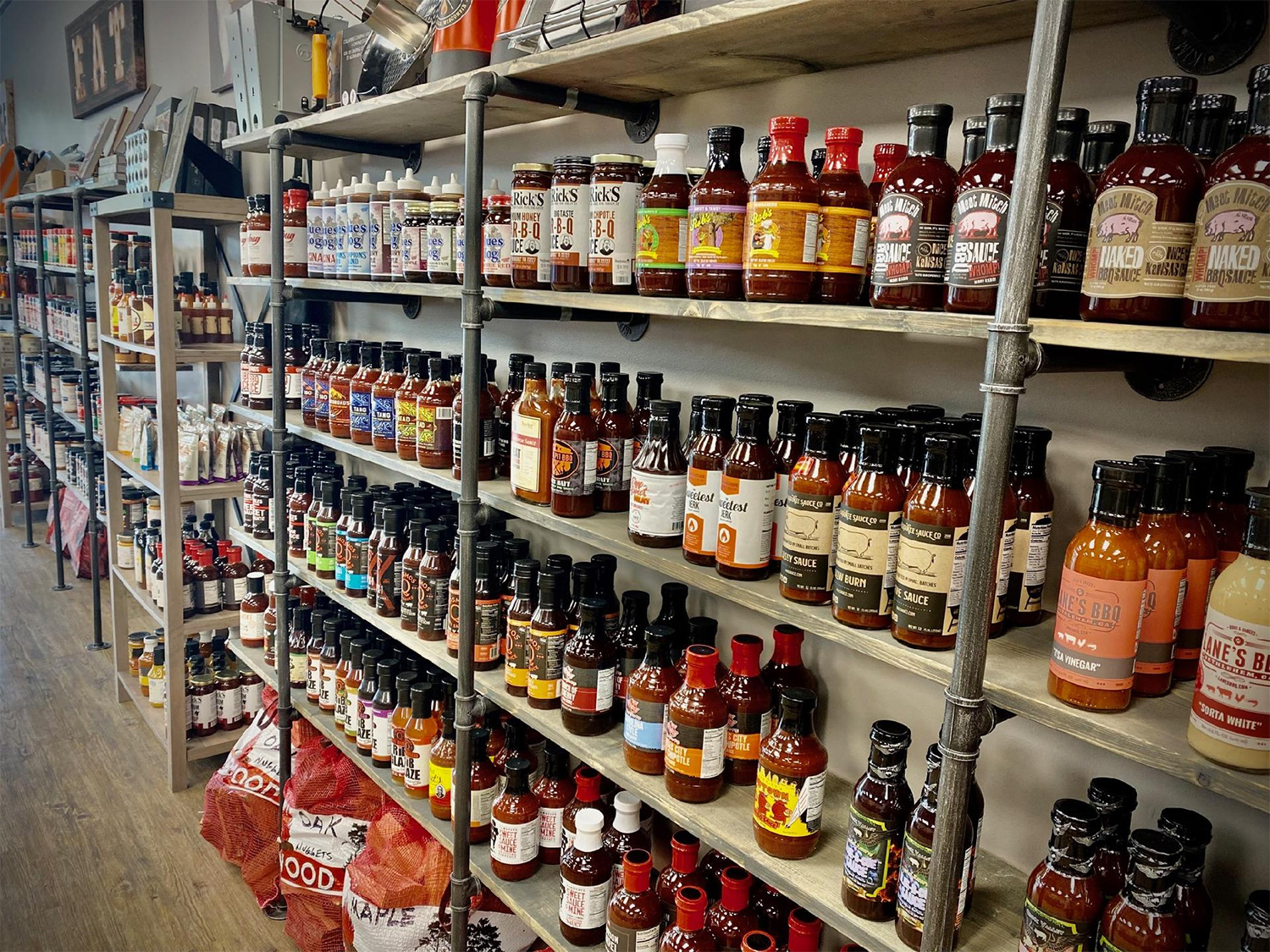 MR: What are the basic barbeque styles, overall or locally, if it applies?

ML: It’s broken down by region. Texas is going to be all about salt and pepper on a protein and using smoke as the flavoring agent. In Kansas City, it’s going to be more of a sweeter sauce. Carolina is kind of divided between a vinegar-based tomato sauce and a mustard vinegar sauce. I don’t think the Midwest has as much of a voice aside from brats. I think Wisconsin has been really innovative in what they have for brats, but there’s no real concrete way for how we cook our brats.

MR: Do you see brats as perhaps being a gateway for some people to barbequing?

ML: Yeah, I think there’s kind of a pyramid of barbeque. Burgers, brats, hot dogs right on the grill is kind of your baseline. From there, it’s going to be low and slow smoking. After that, the upper echelon would be making your own charcuterie or your own cold cuts. That’s kind of the natural progression, so if you still like doing the hot and fast, then get into the ingredients of it. Find out what you like and make that brat the way you think it should be made. The barrier to entry is pretty inexpensive—just a grinder and stuffer.

MR: Speaking of equipment and pyramids, what would be sort of the barbeque pyramid in terms of equipment? What would you say people should have first and what might they work their way up to?

ML: Honestly, a pellet grill makes it super easy for beginners. You basically set it and forget it—anyone can set up a pellet grill and make amazing food. But, if you’re not looking to make that kind of investment right away, a kettle grill is your best bet. It just takes longer to learn it. Once you get better at it—maybe to like an intermediate level—you’ll probably even prefer working on a kettle grill as it gives you more control over what’s happening during the process. Then eventually the experts will usually move over to an offset smoker or drum smoker.

For utensils and other smaller stuff, a thermometer is crucial. Smoking without a thermometer is like flying without instrumentation. Beyond that you’ll just need charcoal and tongs and a healthy desire to do it. Maybe look into a good pair of gloves at some point, too. None of this stuff is all that expensive. 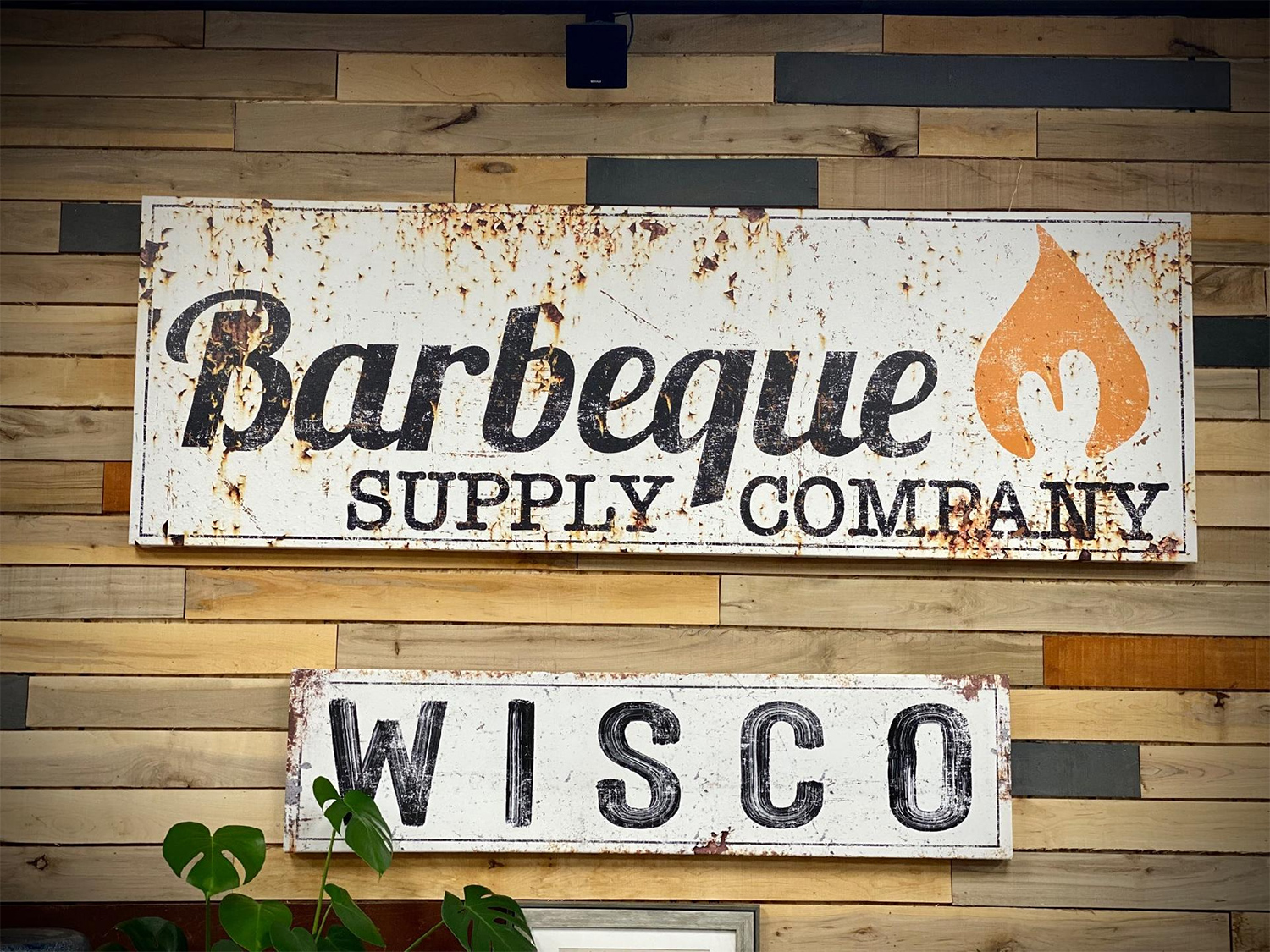