Fried chicken is back, baby! Okay, it actually never went anywhere, but in recent years, there has been a noticeable uptick in dining establishments both in Milwaukee and elsewhere in the country offering the distinctly American dining staple. Similarly, restaurateurs seem to be thinking of new, interesting, and predominantly delicious ways to serve fried chicken. While there’s currently no shortage of restaurant’s helping to bolster the city’s reputation for the timeless treat, one poultry purveyor has quietly-yet-consistently maintained the quality of the deep-fried delicacy for close to 65 years.

Gold Rush Chicken has been treating Milwaukee to “the original home delivered chicken” since 1957. Its empire consists of just two locations—one at 2625 W. North Ave. and a South Side store at 3500 S. Howell Ave.—(and, yes, a Fiserv Forum stand back when live events were a thing) that dole out golden buckets of crispy fowl, inimitable crinkle-cut French fries, and an astounding bevy of other all-American standbys few would expect from a carryout-only franchise its size. With a carryout and delivery format since day one, we figured that even a worldwide pandemic couldn’t stop Gold Rush from doing its thing at a high level. Upon ordering a bucket and some sides last weekend, we’re happy to proclaim we were correct. 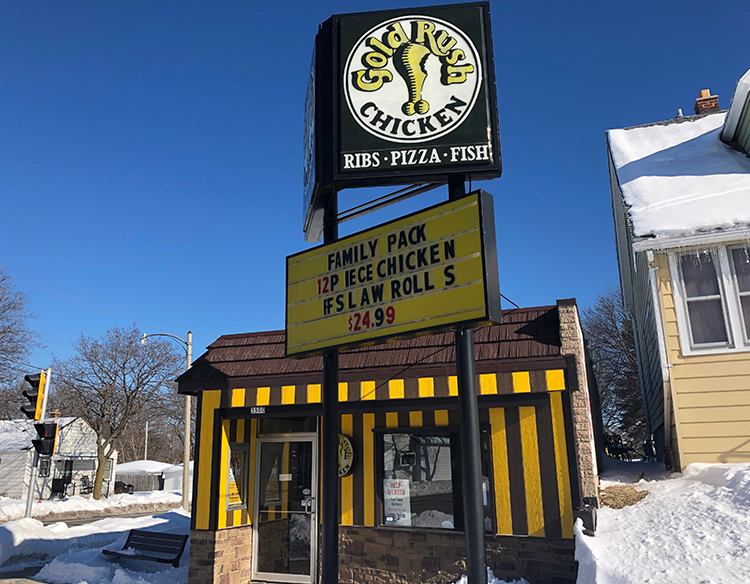 Since we last wrote about Gold Rush Chicken in late 2017, the Howell Street location gave its faded exterior a fresh brown- and yellow-striped paint job and they uncovered a ghost sign dating back to the 1950s (which has since been covered up with new siding). That’s pretty much the extent of the changes the restaurant has brought forth in recent years. Its vast and varied menu that’s rife with simple and satisfying home-style dishes are the same as they’ve been for years.

Hell, even most of the prices—including the Family Pack special pictured in our 2017 piece that’s STILL advertised on the sign outside—have stayed the same. Since the COVID-19 crisis came Milwaukee’s way last March, the only procedural difference is that employees now wear face coverings and customers are asked to do the same when picking up their food. So yeah…fucking do it. Don’t be a child. Call in an order and either pick it up or have it delivered. It’s easy. 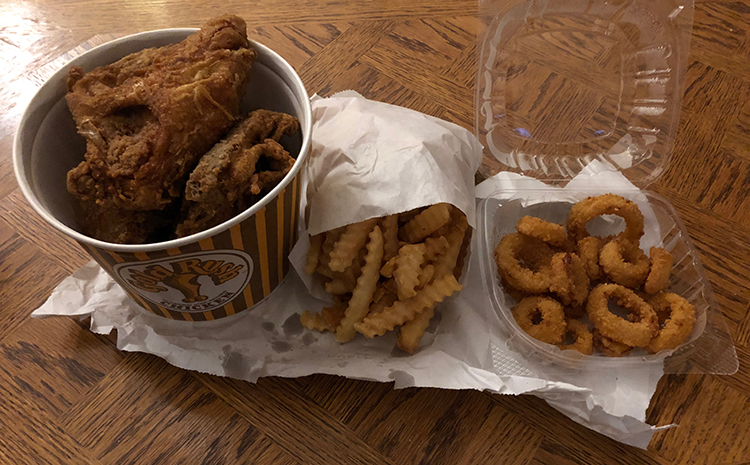 Yes, “Chicken” is in its name, but as mentioned above, there’s A LOT of other things to choose from on Gold Rush Chicken’s menu. Just some of the specialties prepared in its diminutive and endearingly dated locations include pizza, ribs, pork chops, burgers, fish, shrimp, ice cream, garlic bread, potato salad, dinner rolls, malts, shakes, cookies, and pretty much any breaded appetizer the mind could possibly conjure. So even the pickiest member of your family or designated bubble will find something to their liking. Of course that’s all secondary to the chicken. With more than six decades of practice, Gold Rush has perfected the process. 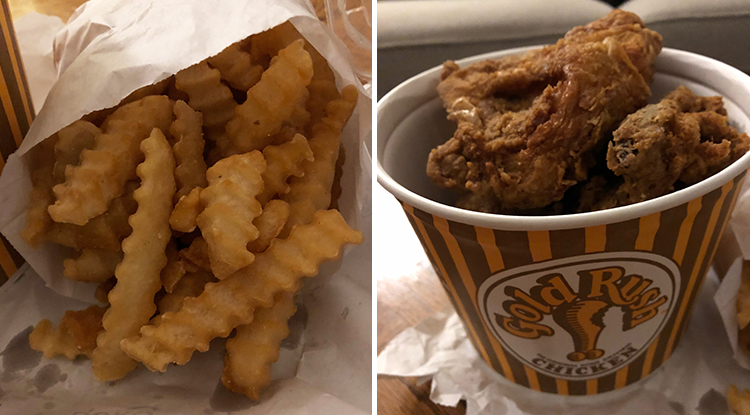 We opted for a Junior 8-piece meal ($16.19), which came with a sizable sack of crinkle-cut fries. The bucket had two breasts, the drumsticks, two wings, and a pair of thighs. Each piece was coated in a crunchy and liberally-seasoned batter that encased plump pieces of tender and juicy meat. Admittedly, the bucket’s voyage from the restaurant to our place wasn’t exceptionally far, but the chicken and fries each remained hot by the time we took them out of the bag. We also added some onion rings ($4.79) that also held up equally well in transport.

Honestly, there’s really not much else to say. Gold Rush has kept it simple and kept the quality high since 1957. If you’re looking for some great, no-frills, Gold-caliber fried chicken, there are two places in town that have your back (three, when Fiserv Forum reopens to the public) seven days a week. You can see Gold Rush’s hours here. 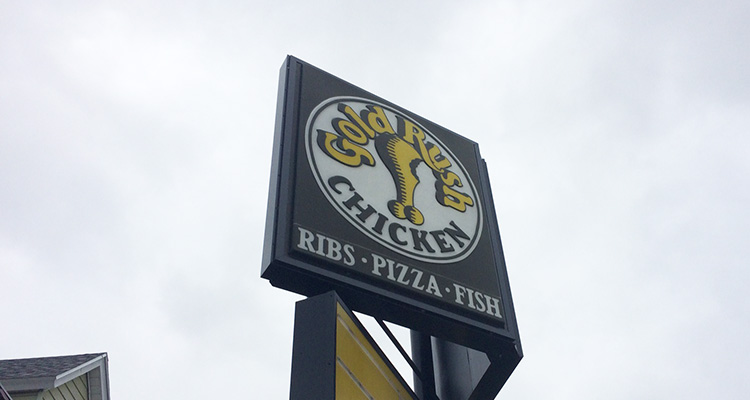