If you’re reading this article, that means you decided to click on the story. Unless you did so by accident, I’m willing to bet you opened this link because you wanted to see exactly how massive the mozzarella sticks referenced in the headline actually are…and maybe because you want to order them to see for yourself. Well, dear reader, I thank you for reading Milwaukee Record and I promise you have not been mislead. There, in fact, is a pizzeria in West Allis that shares its kitchen with a Jamaican place and, yes, within those hallowed walls of that suburban pizza joint, they’re serving straight-up cheese batons.

The pizzeria we’re talking about is a place called Alphonso’s The Original. The restaurant—which is located at 1119 S. 108th Street in ‘Stallis and has an…interesting origin story—offers 16 specialty pizzas, five different crust options, a handful of sandwiches (which can be prepared either hot or cold), calzones they’ve renamed “Alzones,” and an assortment of appetizers. The standout on the menu, however, is something few would expect to be a place’s trademark menu item: mozzarella sticks.

In my experience, mozzarella sticks are rarely (if ever) the star of the show. Often, they’re reheated morsels of pre-packaged mozzarella and batter that come from a big bag establishments keep in their freezer. Sure, they’re a fine thing to chomp on between bites of pizza, but nothing all that remarkable. That’s absolutely not the case at Alphonso’s. A few weeks ago (or months maybe? What is time anymore?!), someone posted a picture of massive mozzarella sticks from West Allis in a Facebook group for fans of the Doughboys podcast. Imagining this was too good/weird to be true, I dug deeper and happened upon Alphonso’s Facebook page where I confirmed that, holy shit, these things were actually real.

Alphonso’s refers to these gigantic motz sticks as “Lightning Rods.” According to the restaurant, they’re made fresh and from scratch every day. Because they’re prepared daily and kitchen space is limited at the moment, Alphonso’s runs out of Lightning Rods pretty quickly. Because of those factors, the restaurant limits customers to only two Lightning Rods per order (or four if a pizza is also ordered). Yesterday, I called Alphonso’s at 4 p.m.—their opening time—sharp to stake my claim on a pair of Lightning Rods and to finally see firsthand just how big these things actually were. About 30 minutes later, I picked up my order and took it to Milwaukee Record headquarters. I opened the noticeably heavy pizza box I was handed, peeled back the foil and saw… 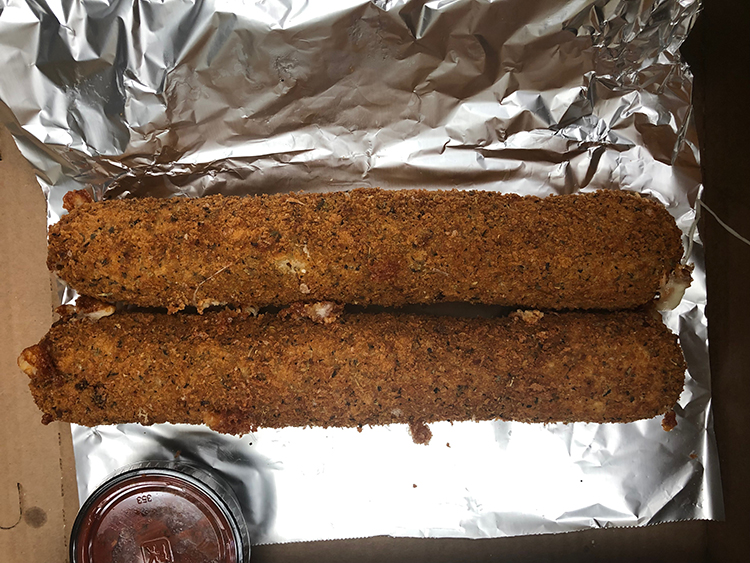 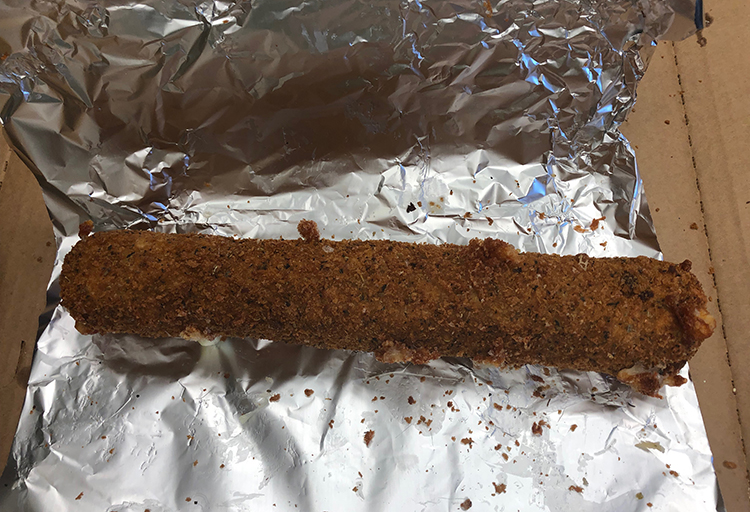 Knowing the picture probably doesn’t do these things justice, I decided to take some Lightning Rod measurements before taking one of these dairy torpedoes to the dome. 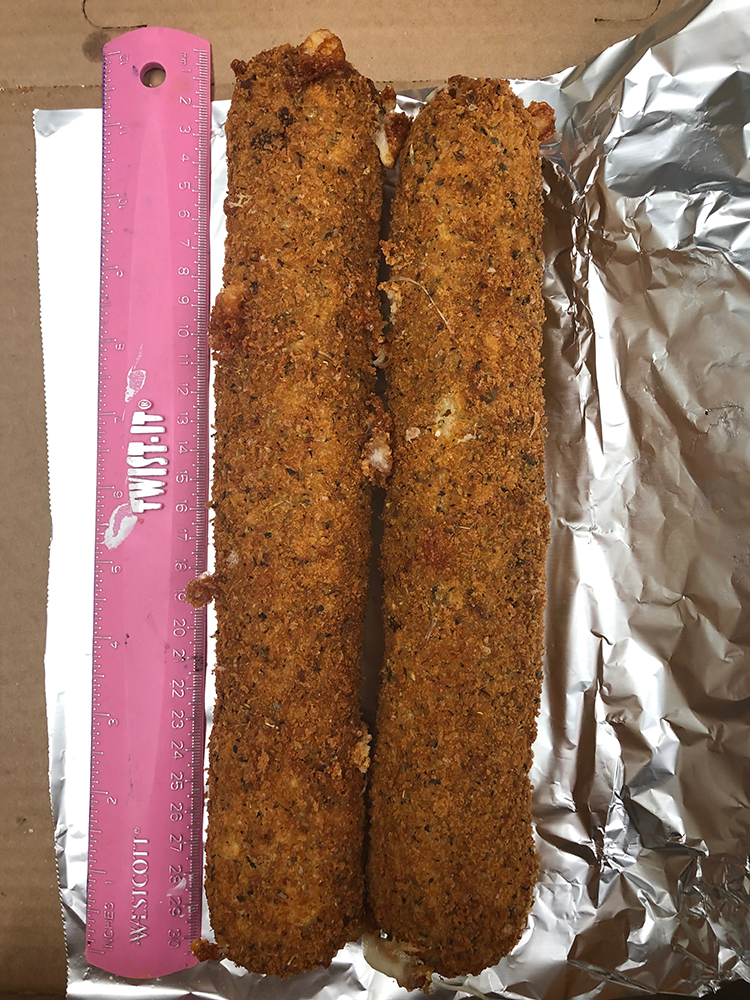 One of the Rods was more than a foot in length. The other came to approximately 11.5 inches long. 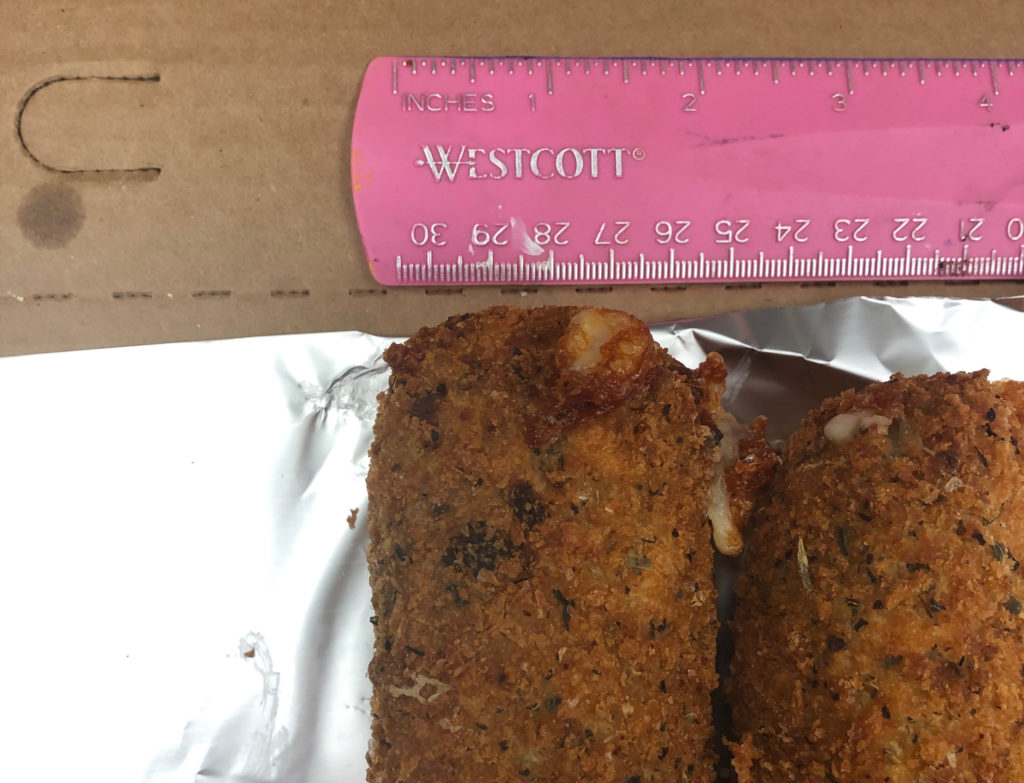 The girth was also pretty substantial, as they were each about two inches wide and almost that tall, too. 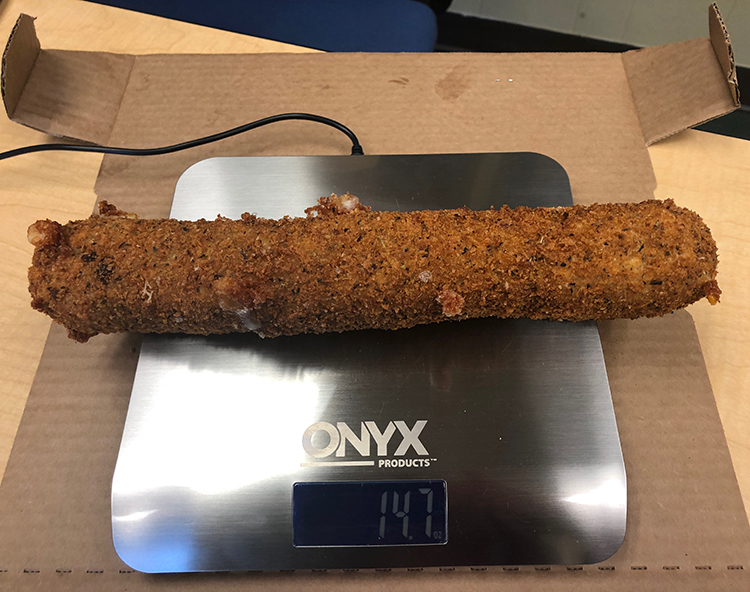 I mentioned the box was heavier than I had expected it to be, but exactly how heavy were these mozzarella logs? Well, with each Lightning Rod being handmade, the weights differed a bit. The heavier of the two clocked in at a staggering 14.7 ounces. 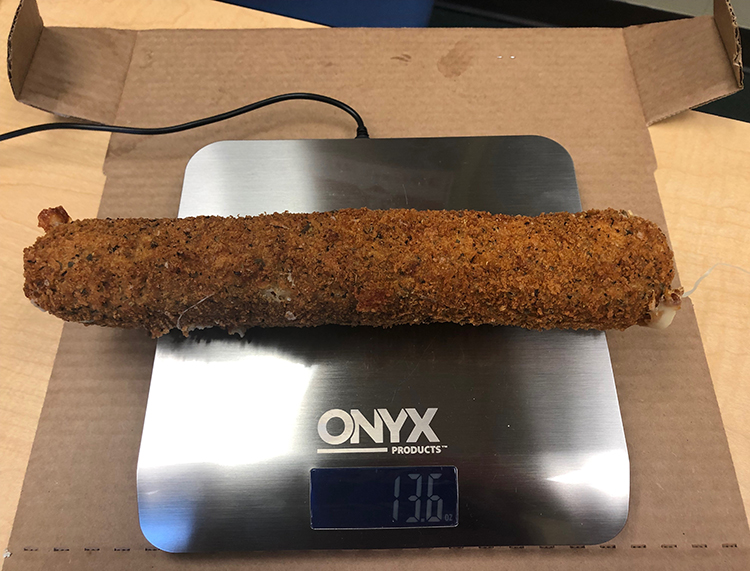 The smaller one still weighed a still-quite-respectable 13.6 ounces. 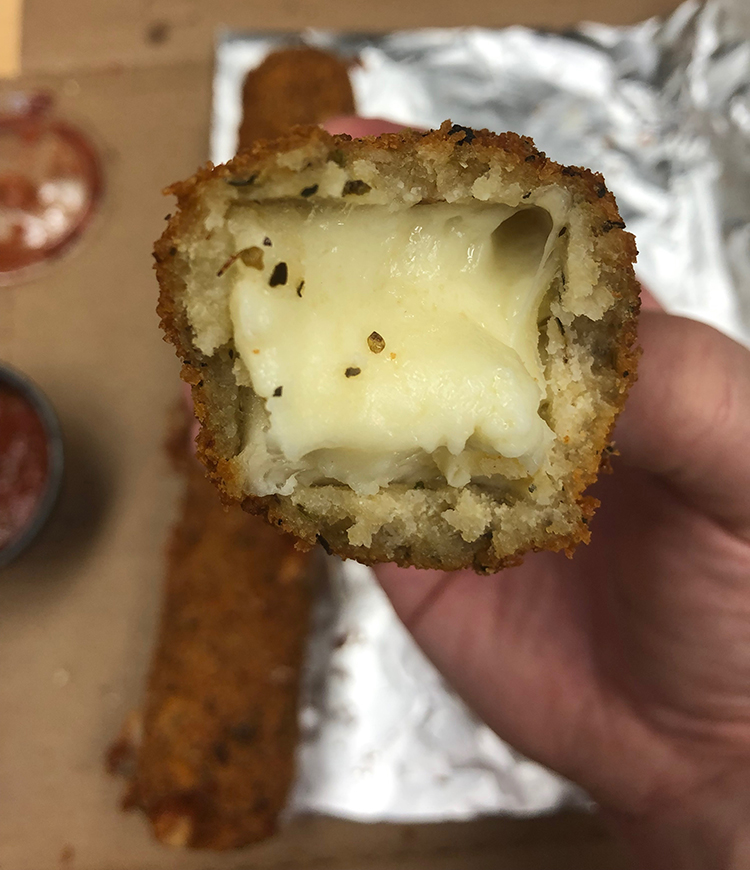 For those scoring at home, that’s just shy of two pounds worth of cheese, breading, and Italian herbs. And they were absolutely stuffed with cheese. 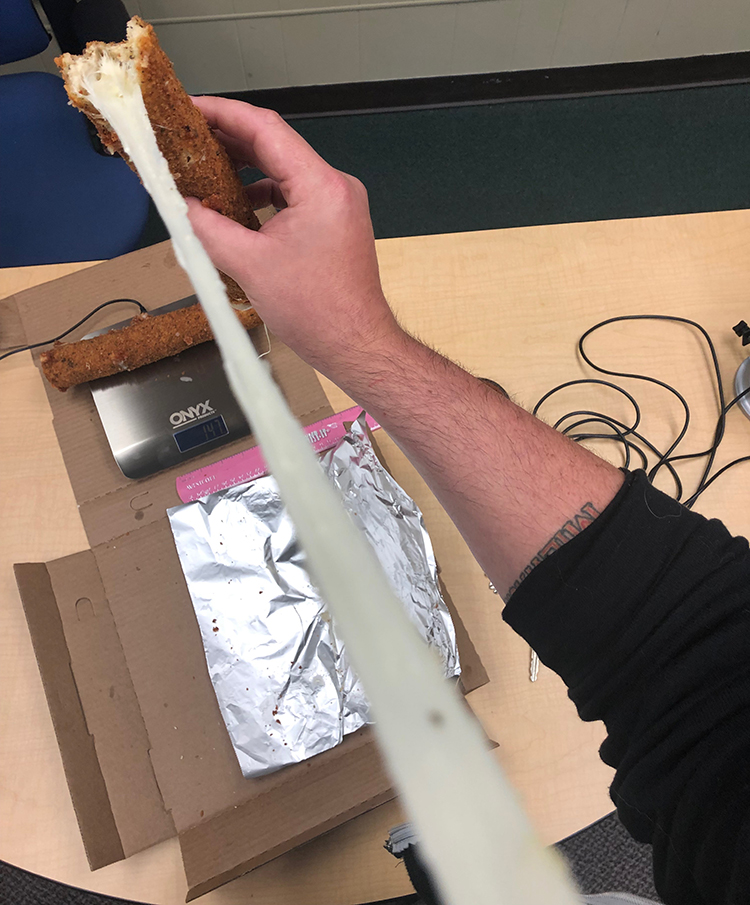 Just look at that string action! 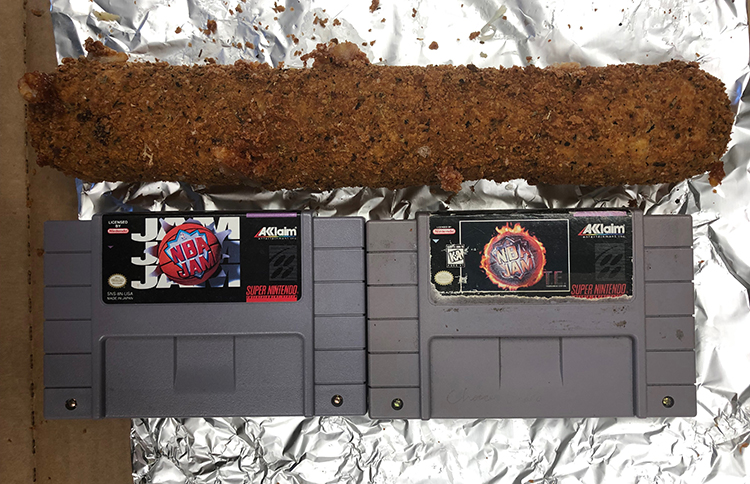 If you’re somehow still doubting the sheer size of these cheese pipes, I decided to put some things we had sitting around our office beside the larger of the two Lightning Rods in order to help establish scale. As you can see, it’s bigger than NBA Jam AND NBA Jam T.E. Super Nintendo cartridges stacked end to end. 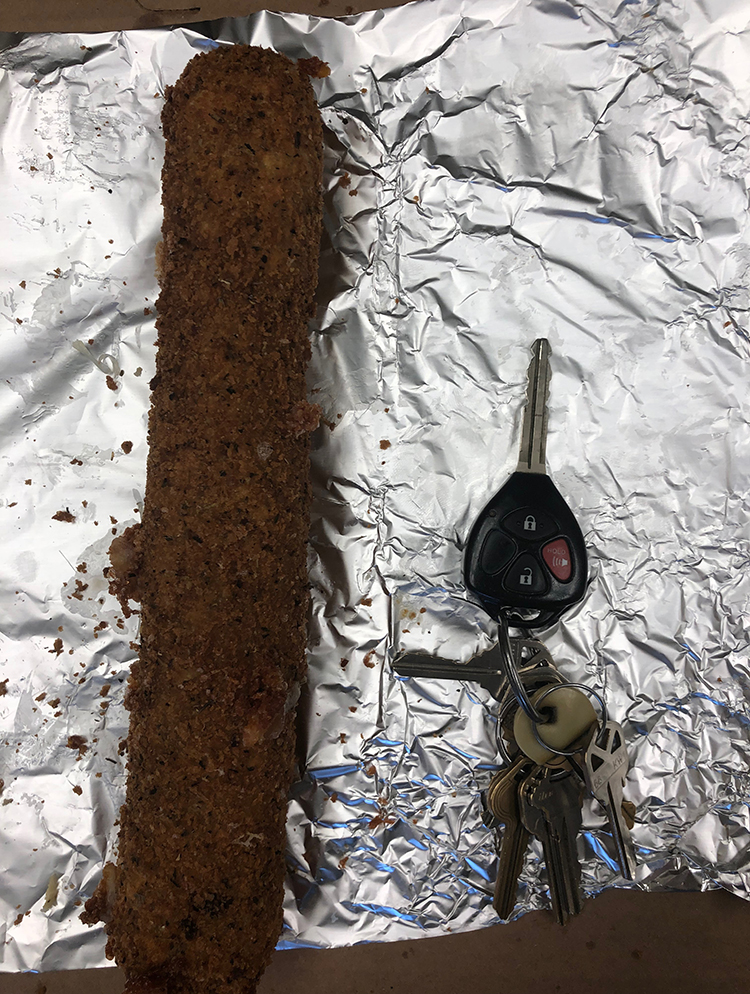 Here it is next to my keys. 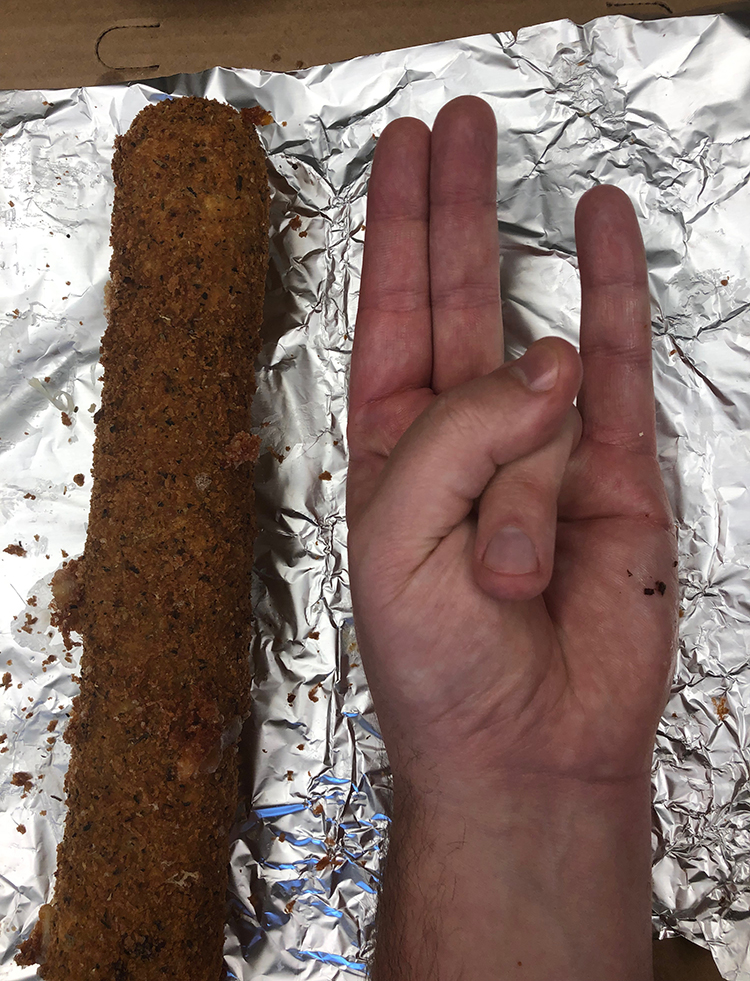 My hand (doing the shocker). 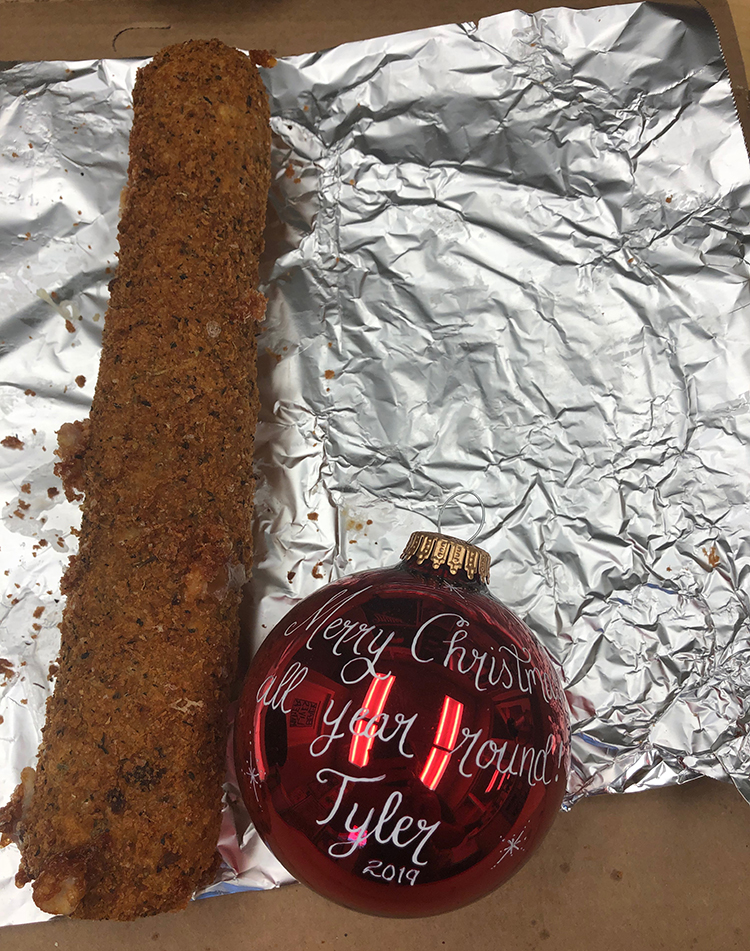 A Christmas ornament the Kristmas Kringle Shoppe in Fond du Lac sent me. 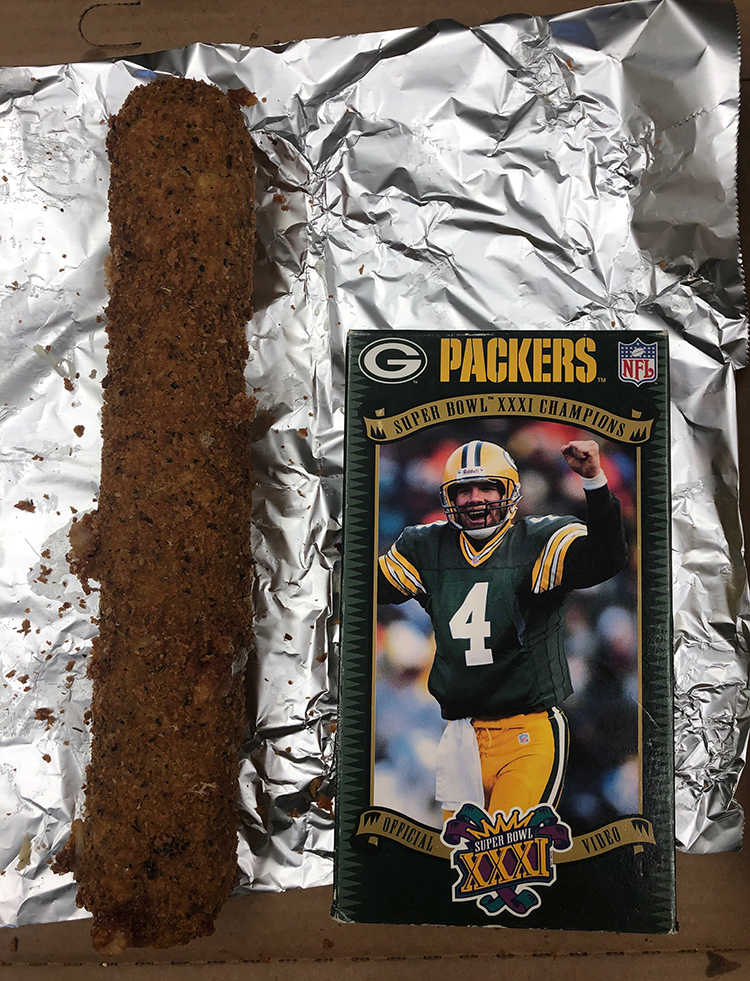 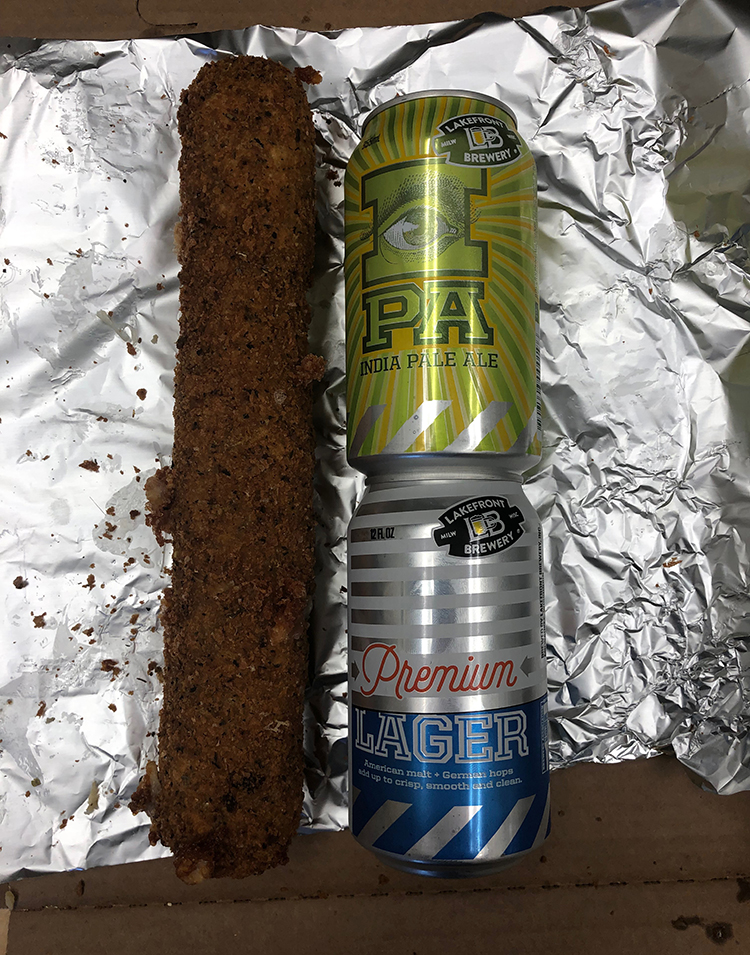 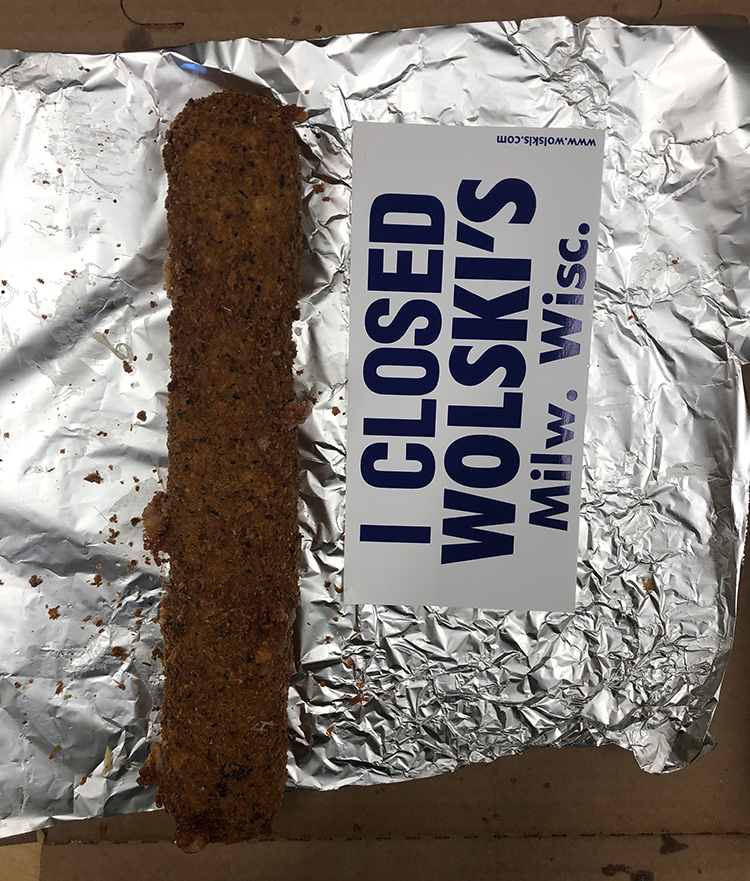 An “I Closed Wolski’s” sticker. 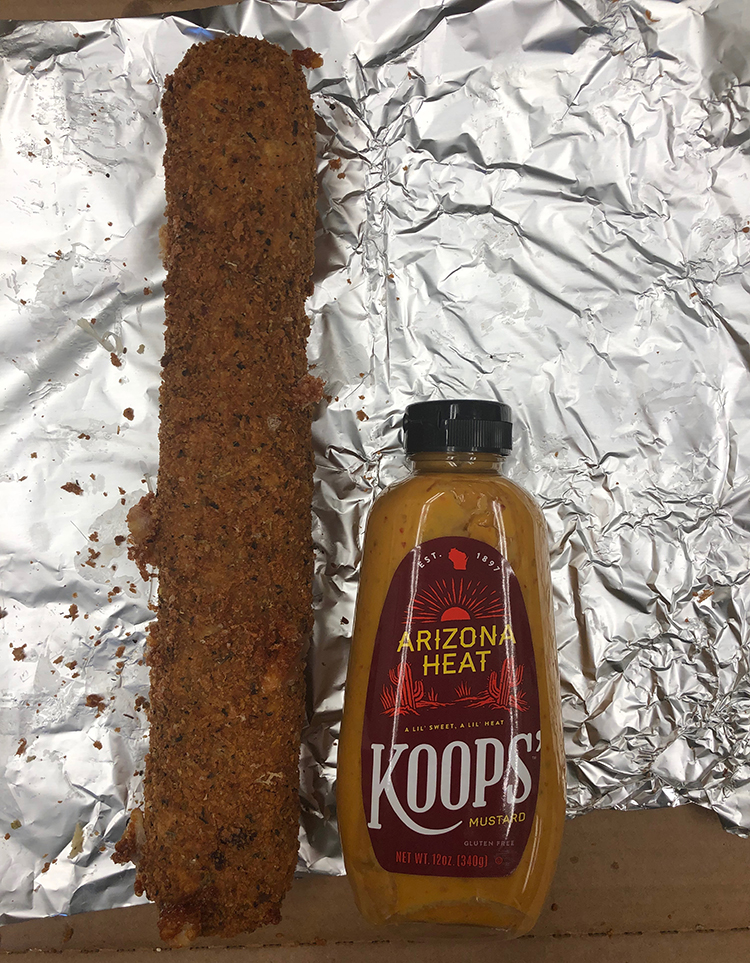 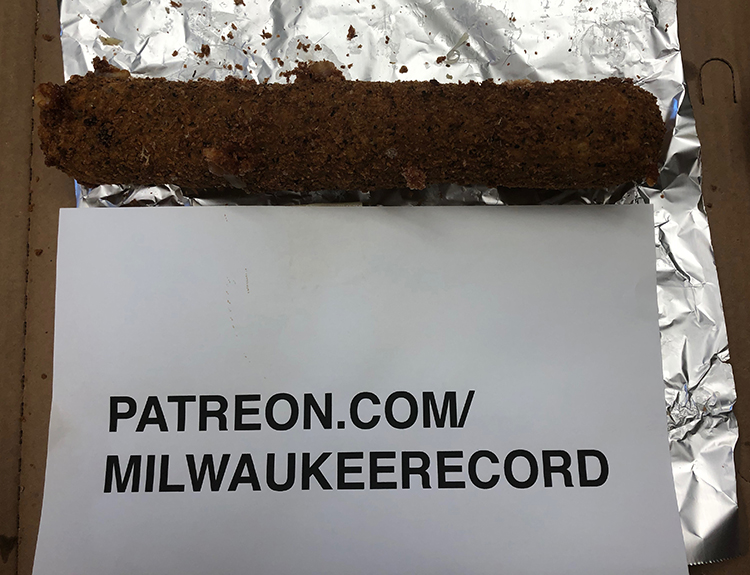 A sheet of standard printer paper with our Patreon URL printed on it. Subscribe now! 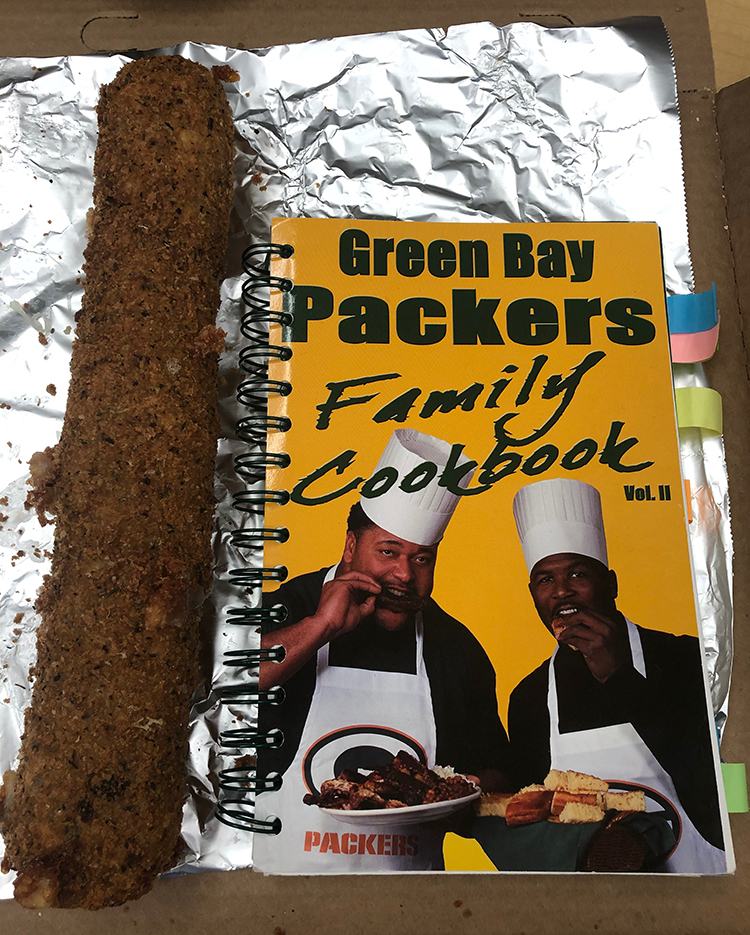 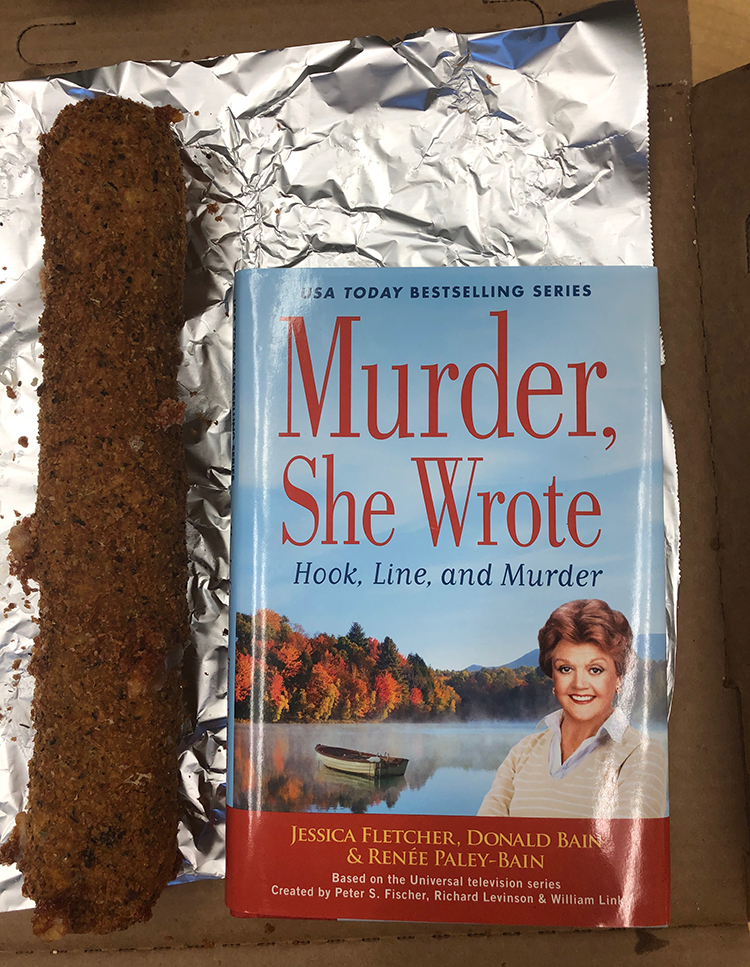 A copy of Murder She Wrote: Hook, Line, And Murder. 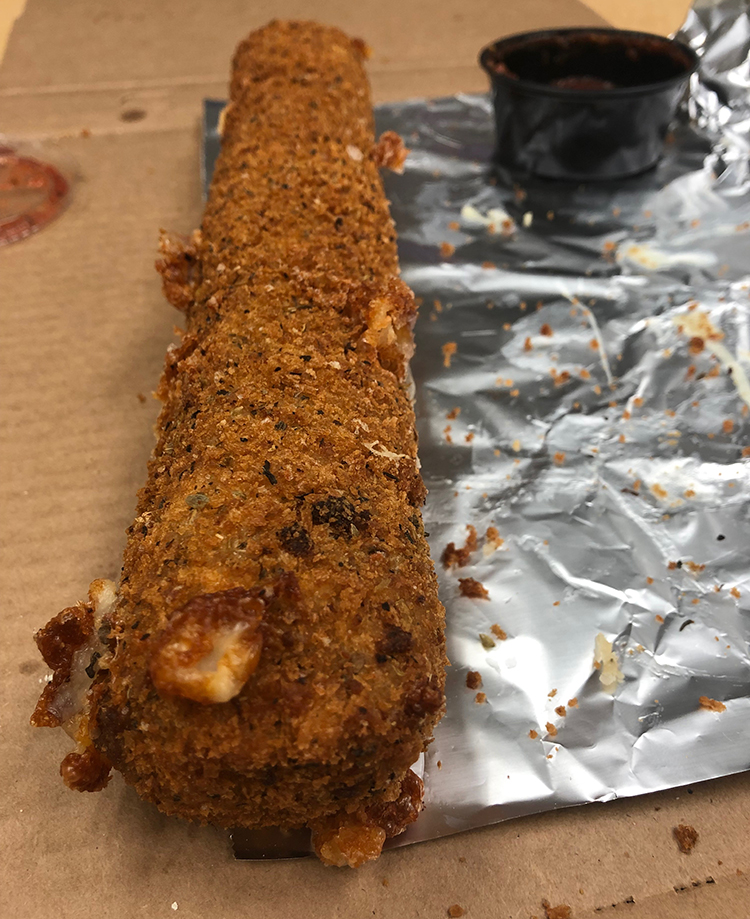 Perhaps the most astounding Lightning Rod-related measurement is its value. This order of two Rods ran me just $6 (including tax). The four-Rod orders are only $11. It’s also worth mentioning that I ate only one of the Rods—once again, the smaller of the two—around 5 p.m. and didn’t feel the need to eat anything else until I had a light breakfast this morning. That’s a lot of mozzarella for $3! I’m not sure what I’ll do with the other one. Maybe I’ll use it as a doorstop or maybe I’ll freeze it to use a club to protect my home from intruders. I’ll most likely eat it once I work up the appetite and the courage to eat the single biggest mozzarella stick I’ve ever seen in my life. Thank you, Alphonso’s in West Allis. Thank you.