It was a dreary night and I was in a reflective mood as I rode the bus downtown towards the Old German Beer Hall (1009 N. Old World 3rd St., 414-226-2728). Nick Drake’s Pink Moon filled my ears as I approached the fog-covered buildings, and as I made it to State Street I disembarked from the GreenLine and walked west to my destination. On the previous two weeks I had gone to Irish and Polish restaurants for fish, and this week I decided on a place steeped in German tradition. It only seemed natural to go to a German place; in addition to Milwaukee being known as the “City of Festivals,” its historically large German population has also helped earn it the name of the “German Athens of America.” The Old German Beer Hall is modeled after the Hofbräuhaus in Munich, a famous beer hall that was first opened in 1589.  That beer hall, as well as the one in Milwaukee, both serve Hofbräuhaus beer.

There is a long bar on the right as one enters the building, which was completely packed when I arrived, and I walked past it through a hallway that connects to the big beer hall in the back. Long tables fill that room, and a raised stage is in the back corner. That room also was almost completely filled with people, and the whole building was quite loud, festive, and boisterous. You see, I had arrived shortly after 6 p.m., and at the Old German Beer Hall at 6 p.m. on Fridays, a free keg of beer is tapped.

I went back to the bar and ordered a beer and a fish fry, and strolled around looking at the German-themed artwork and animal heads on the wall. A table soon opened up in the hallway between the two main rooms. As I was waiting for my food, someone came around and asked me if I wanted to sign up for the beer stein holding competition that would be happening at 7 p.m. Although I was tempted to sign up, I decided I would just stay and become a spectator. 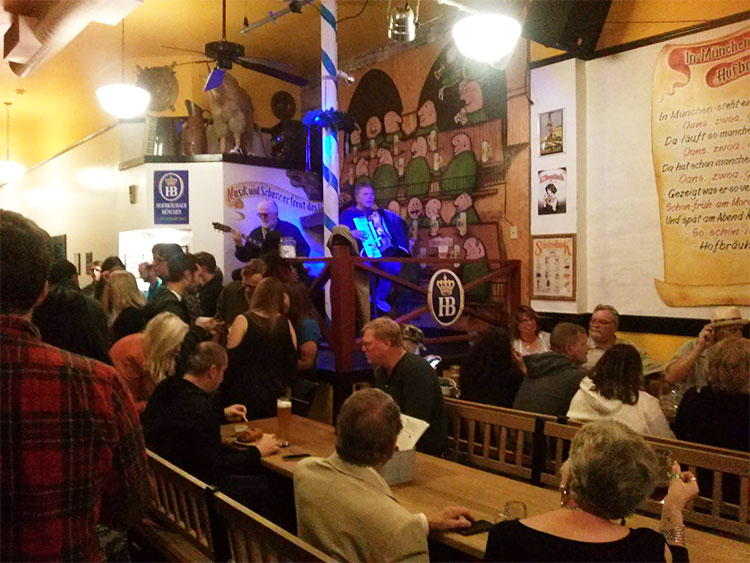 Polka music began emanating from the stage in the beer hall, where a two-piece group consisting of a guitar and accordion player was set up. I noticed a line of fish frys under the heat lamp in the food holding area across from me, and hoped that one would be mine. To my dismay the fish all headed in different directions and I was left waiting. But, to my surprise, one of them had gone in the wrong direction and was brought back to me after all.

There is one fish fry option at the Old German Beer Hall, which is listed as “one half-pound of HB-battered cod,” at the reasonable price of $9.95. Mine consisted of two pieces of fish, which were pretty average—they had a fine texture, but were not very flavorful. I was disappointed with the tartar sauce, which tasted like plain life-lacking mayonnaise mixed with pickle relish. The fries were standard straight cut fries which were perhaps a little over-salted, maybe just in an attempt to get me to buy another beer. The coleslaw was enjoyable, and consisted of small, uniformly cut chunks of cabbage and carrot. Finally, the rye bread wasn’t anything to get too excited about. 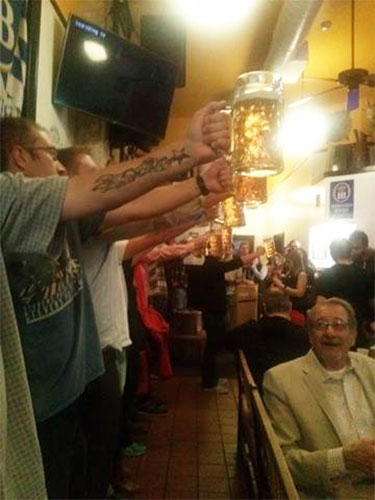 As I finished my meal I made my way to the back hall and waited for the stein holding competition. I lined up against the wall as to not be in the way, but soon found out I was in line with everyone who was about to start the competition—about a dozen or so people in all. The loud and boisterous nature of the hall heightened as the competition started, with people yelling and chanting as arms with steins wavered and gave out. The final contestant made it over four minutes, and there was a hearty cheer before everyone got back to drinking with their friends. As I weaved my way through the crowd towards the back door to leave, I paused to watch part of a Hammerschlagen game, where people were swinging hammers with one hand and drinking beer with the other.

The festive nature of the Old German Beer Hall—and maybe a few beers— had rubbed off on me, and my reflective and melancholy mood turned into a dance in the drizzle to the Modern Lovers as I waited for the bus. And instead of heading back home, I went to Von Trier to meet some friends and continue the theme of the evening: Gemütlichkeit!

Rating: Average fish; sad tartar sauce; salty but good fries; decent coleslaw; excellent German beer—which is free at 6 p.m. on Fridays; beer stein competitions; polka music; Hammerschlagen; not where you go for a nice quiet meal—this is where you go to get festive. 3 out of 5 stars. 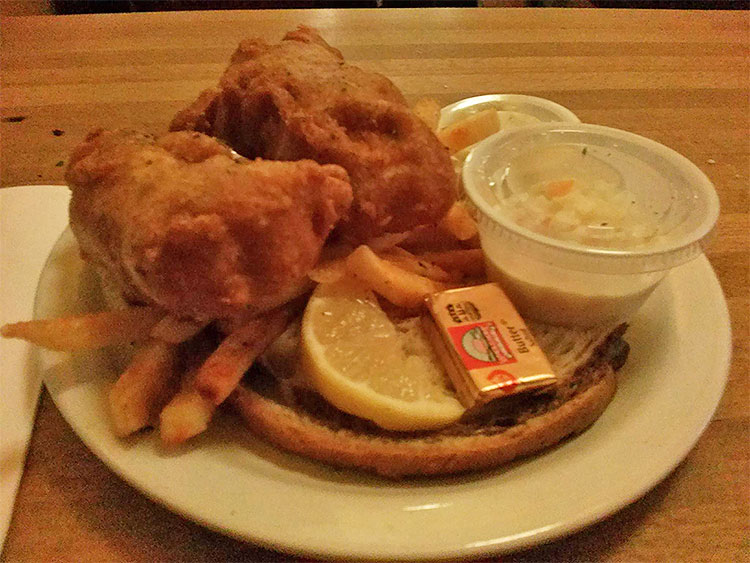