At some point in the last 20 years, the simple act of seeing a movie became a production. No longer could you simply show up, buy a ticket, and enjoy the film—seats needed to be reserved, and those seats needed to recline and rotate and vibrate and have enough room for three adults and three three-course meals. 3D or not 3D became a question (for a while, at least). Devices needed to be silenced. Ninety-minute pre-show “entertainments” needed to be watched. The whole thing became kind of exhausting.

None of this has ever applied to the Downer Theatre (2589 N. Downer Ave., 414-962-3120). For more than 100 years, the stalwart “neighborhood theater” has served up the very best in domestic, foreign, and independent films. No muss, no fuss. Is it a gorgeous and ornately decorated movie palace? No. Is it a technologically advanced and modernly appointed multiplex? No. Is it kind of scruffy and rough around the edges? Sure. If the Oriental Theatre is the glistening jewel of the East Side (and the Avalon Atmospheric Theater is its Bay View counterpart), then the Downer Theatre is the cool pair of beat-up shades you slip on when you’re watching that dance scene in Godard’s Bande à Part.

The Downer is much more than a charming hole-in-the-wall—it’s the oldest movie theater in Milwaukee that still shows films. The theater opened on December 3, 1915, with a showing of the now-lost film Seven Sisters. Milwaukee developer Oscar/Marc Brachman and “movie entrepreneurs” Thomas and John Saxe built the theater for the princely sum of $65,000. The design of the two-story building came courtesy of Chicago architect Martin Tullgren. Sound in those pre-sound days (“talkies” were still more than a decade away) was provided by an orchestra, a Sohmer piano, and a pipe organ from Milwaukee’s Wangerin-Weickhardt Organ Company. It was a single-screen theater with a capacity of roughly 1,000.

…it occupies a unique niche in the architectural history of Milwaukee’s movie theatres. Built more than twelve years before the advent of ‘talking pictures,’ the theatre is one of the few in the metropolitan area that made the transition from silent pictures to sound pictures and still survives, basically intact, today. … Today the Downer is not only a rare survivor from the silent film era, but it is also an outstanding example of how an older theatre can be successfully adapted to meet the needs of the modern marketplace.

About that modern marketplace. Ownership of the Downer changed several times throughout the years (Warner Brothers owned it for a stretch in the 1930s), but the most current change happened when the Landmark Theatre Corporation acquired the theater in 1989. It was after this acquisition that the Downer was remodeled into a twin-screen theater with a total capacity of 465. The cost of the project was double the theater’s original price: $130,000. The Landmark Downer Theatre reopened in May 1990.

And so the Downer Theatre stands today. The Art Deco marquee (a 1930s-era replacement for the original) is an icon of the already iconic Downer Avenue, and it can sometimes get delightfully cheeky. Some examples from the past few years: 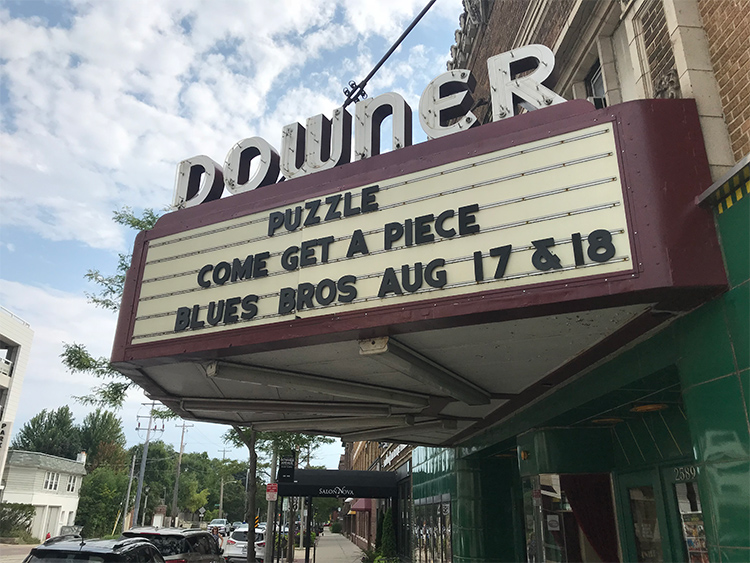 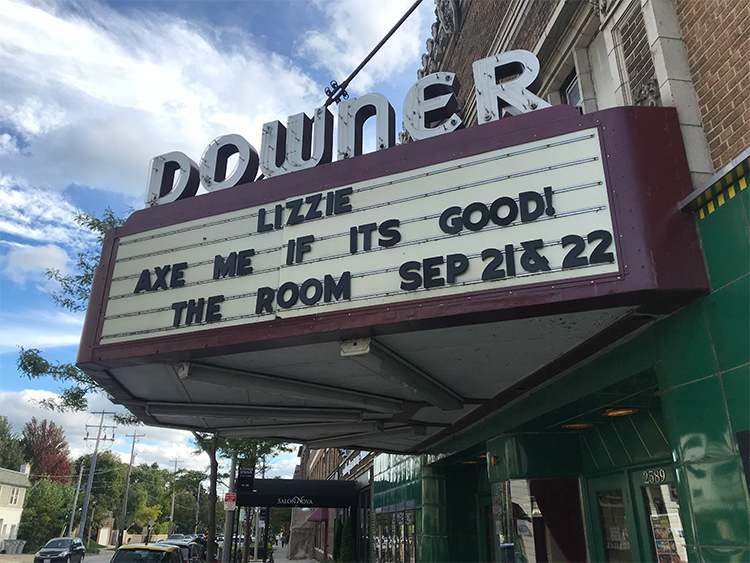 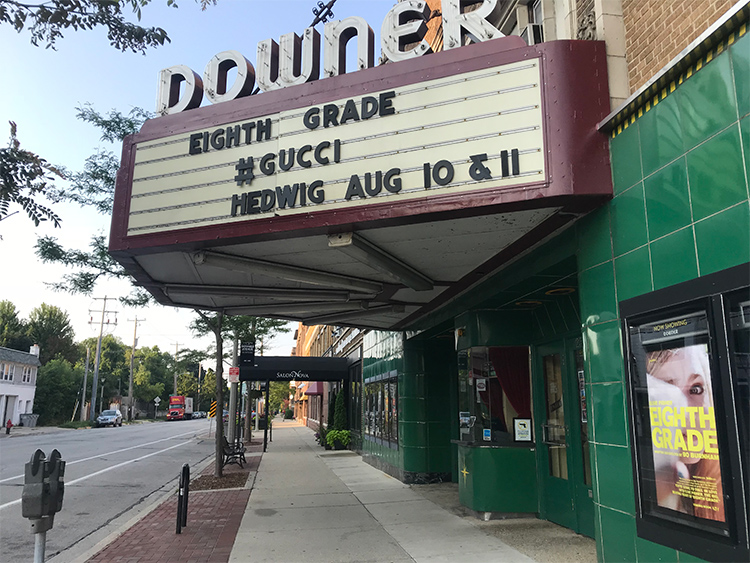 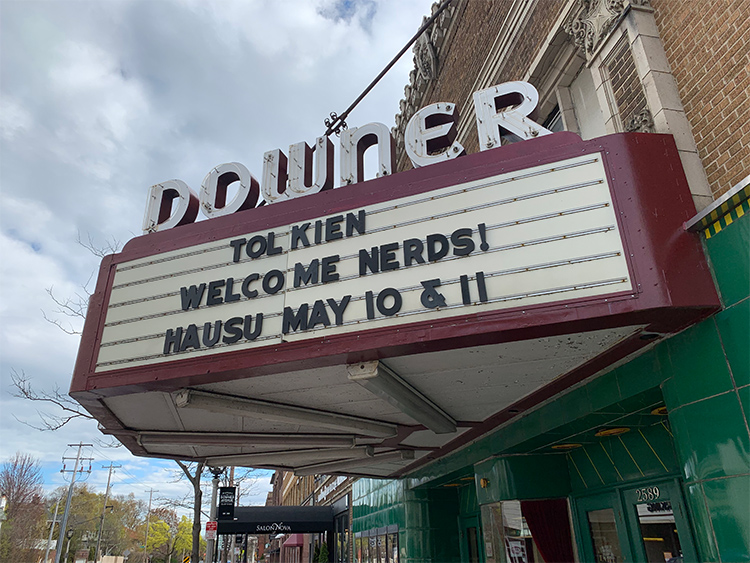 As for films, the Downer has specialized in “art house” fare since the 1940s. (As of this writing, you’ll find Portrait Of A Lady On Fire and Greed lighting up its screens.) Midnight movie series appear from time to time. As for amenities, the Downer is refreshingly bare bones: the usual popcorn, candy, and soda combo is supplemented by wine, as well as beer from Lakefront and New Glarus. That’s it.

And therein lies the charm of the Downer Theatre. It’s a “neighborhood theater” in every sense of the word: small, lived-in, intimate, well-loved. It has no aspirations of providing a “modern” moviegoing experience stuffed with distractions. It looks and sounds good (the projection is digital) and dammit, that should be enough. In an era when going to the movies can feel as personal as eating at a fast food joint, the Downer Theatre strips away the fat and allows the power of film to speak for itself. Show up, buy a ticket, and enjoy. 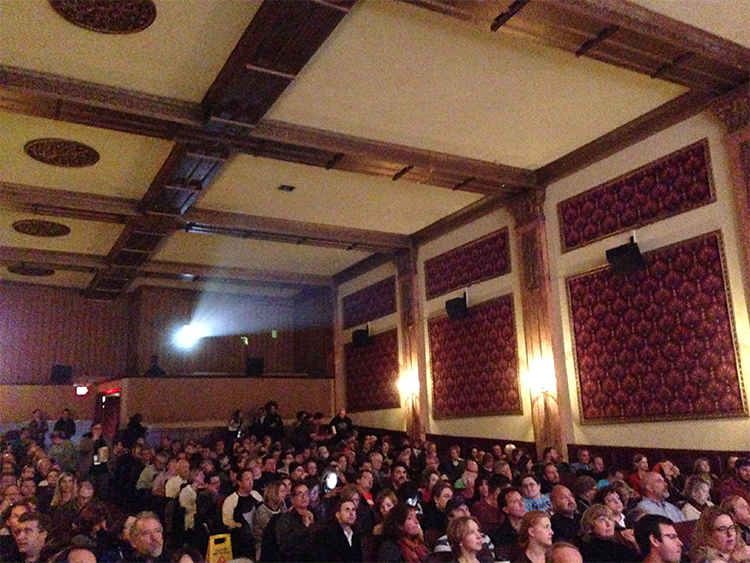