Kyle Kinane and Officer Bradford go way back. Since meeting on tour years ago, the Midwest-born comedian and Milwaukee-based punk rock police officer in Masked Intruder have become friends and appreciators of each other’s work. Instead of personally asking Kinane the same old questions prior to his March 7 show at Turner Hall, we figured it’d be more interesting to have Officer Bradford interview him for us. We were correct.

The two entertainers talked about where they met, subsequent run-ins, touring with The Falcon, puking in vans, cartoons they’ve worked on, and Kinane’s whiskey-fueled surprise set at The Vanguard in 2016. Along the way, Kinane also discusses performing in Kuala Lampur, his podcast, what it’s like to have projects shelved, and Crawford’s Chicken in Burbank. Read their conversation below.

Officer Bradford: So am I talking to bearded Kyle or clean-shaven Kyle right now?

Kyle Kinane: Man, clean-shaven Kyle. I don’t know how many times people expect you to be a certain way. Sometimes you just want to break free, break free of the expectations. You know, just be somebody else for a while. I’m a little desperate for that sometimes. It’s real fun when I have a beard and people are just horrified when they see my actual face.

OB: You really have a face for voiceover at this point?

KK: Yeah, I shaved it for a TV show, which my naked ass is also in, and people were more horrified at my naked face than my ass.

OB: I think you’re beautiful no matter what.

KK: Well, coming from an officer of the law, I appreciate it.

OB: So this run of live shows that you’re doing, are you going to any new cities this time? I saw that there’s a Yukon Territory show.

KK: Actually, I was just in China, so I’d say that’s pretty new. And Kuala Lampur because they have eight people that appreciate comedy in English. I went all the way there for that. I still haven’t been to Florida in five years, but I’ll go to the continent of Asia to get a dozen people in a room who might understand sarcasm and weird, subtle references. But yeah, I was like “Yeah, I’ll go to Yukon. When it is? Oh, when it’s still winter? You betcha.”

OB: I’ve been a naked cop in some pretty weird places, too. What city did we meet in? Was it Detroit? I think it was Detroit on a [Teenage] Bottlerocket tour.

KK: No, St. Louis. It was at the Firebird in St. Louis. I had gotten to town a day early and I didn’t even know about Masked Intruder, and I went to see Teenage Bottlerocket. I caught, I think, the last half of your set and was like “What’s happening? Who are these figures?” And it was a blast, so I went to your second show that night. Then I got picked up by Officer Bradford here in Los Angeles, and I’ve also seen you guys in New York and Festival [in Gainesville, Florida]. I’ve seen you guys a bunch.

KK: But I remember I got picked up in Los Angeles. I got Officer Bradford to pick me up, which was very comforting by the way. For anybody that’s hesitant about the opportunity, you need to embrace it, it’s great. 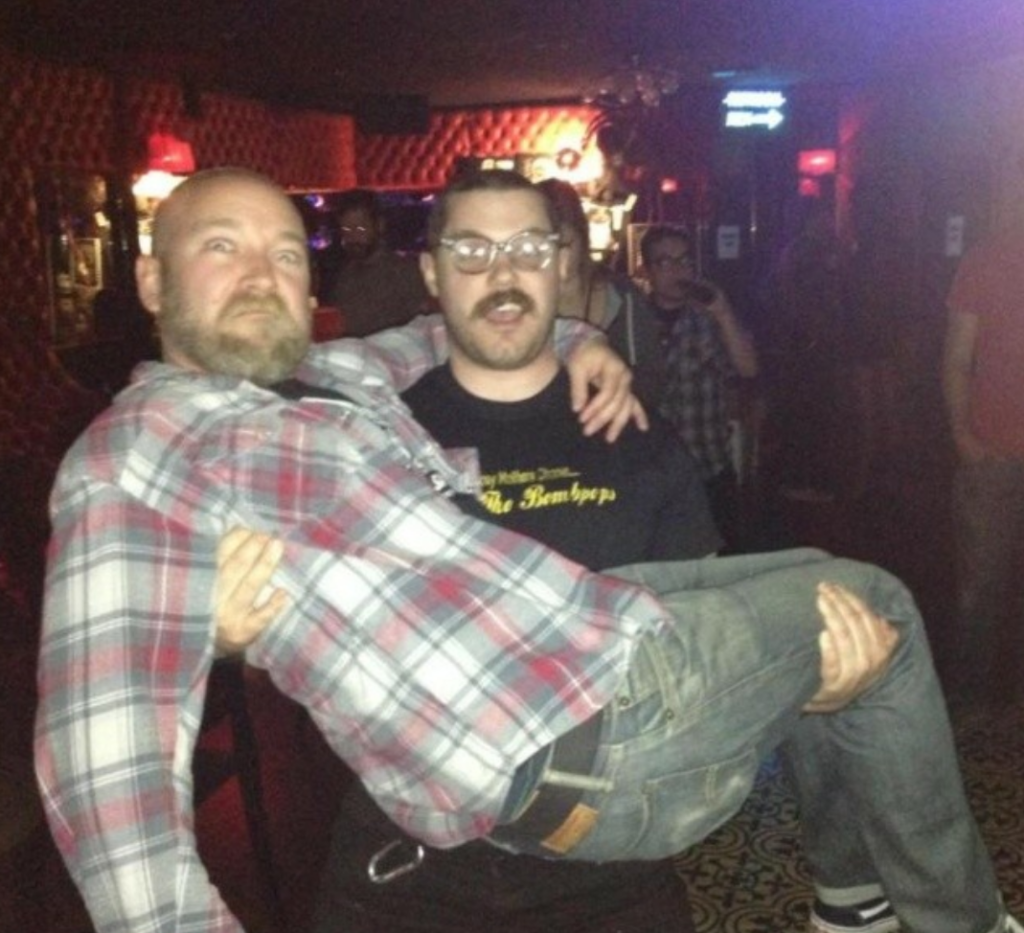 OB: You’ll be here at Turner Hall on the 7th. I can gladly pick you up at that.

KK: Maybe we can get an updated photo. Basically, I think my return to Milwaukee has to be an apology for my appearance at Vanguard.

OB: No, that was great! Was that the weirdest green room experience you’ve had? The prep kitchen at Vanguard.

KK: Yeah, being trapped with a bottle of whiskey in a kitchen for a while, then going up to an untested P.A. system in a room full of people who just wanted to watch a football game. I’ve definitely done weirder shows, but not ones I’d specifically flown across the country to do. I remember that was my stop on the way to Halifax [Nova Scotia] and was like “Well yeah, I guess Milwaukee sort of makes sense. It’s somewhere between here and there on a map. Let me just stop over in a city and get blind drunk in front of people who don’t care.” 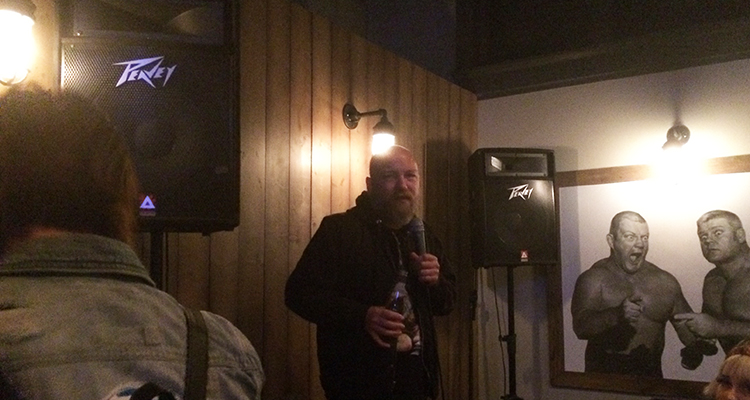 OB: How was it sharing green rooms with The Falcon?

KK: Oh, those guys are sweethearts. They’re old hat at it. I don’t know how you guys are on tour, but two of ‘em don’t drink, one of them just wasn’t drinking on tour. I started that tour stricken with gout and that was the worst I’d had it. I couldn’t even really walk onto the stage and couldn’t move around when I was up there, so I had to go to a Canadian emergency room to get a steroid pill. Then right after that, I threw up in the van because everybody got a stomach bug. I’d never been on tour with a band and I was so excited. I thought it was going to be such a cool, rock and roll time. Instead, I was hobbled with cane and then I got the stomach flu. I barfed all over everything in the van.

KK: Did you get it into a receptacle at least?

OB: Mostly out the passenger window, but not all. “Mostly” doesn’t count with vomit. It’s kind of like the opposite of horseshoes and hand grenades.

KK: Yeah, I felt pretty bad. Everybody was pretty nice about it. They’re nice fellas and I appreciate them letting me tag along.

OB: Are there any plans to bring The Boogie Monster on tour?

KK: Yeah, we’re going to take it up to the Pacific Northwest. We’re getting some stuff out there. We’ve done a couple live shows and people seem receptive. Although, we just kind of throw a bunch of booze at it and see what happens, but so far so good. Nobody’s accusing us of professionalism.

OB: How did that podcast start? Were you sick of the 30 minutes a day you weren’t in front of a microphone?

KK: You’re not really allowed to be a comedian anymore unless you have a podcast. The comedy union required us to start a podcast. It’s definitely not an expert’s podcast, but Dave’s recipes are pretty good.

OB: Do you have any other big plans coming up? Any projects you can talk about?

KK: A site you’re familiar with, The Hard Times, they’re going to start pitching a TV show and asked me to be involved. I was happy to because I think their stuff is hilarious, so I hope that goes. And these guys made a cartoon called Action Dinosaur. I wasn’t part of the creative process, but they were like, “Hey, we made a cartoon that’s about a dinosaur who skateboards and shreds on guitar and makes a lot of bad dad jokes. We think we need you to be the voice of it.” That was totally up my alley. A prehistoric David Lee Roth? I can absolutely do that. They’ve got a Kickstarter that’s almost all the way funded to help them make it on their own instead of getting networks or whatever offer notes that aren’t good, then try to bow to their ideas that ruin the idea in the process. What ever happened to the Masked Intruder cartoon?

OB: I was just going to bring that up. It’s sitting in the inbox of some attorney right now, I believe. That whole back and forth. Have you had many projects shelved?


KK: Yeah, but that’s the profession I’ve chosen. I don’t get heartbroken so much. In stand-up, people either laugh or they don’t laugh. I know right away if something is shitty. I don’t have to do it for nine months, only to hear it’s not going to work out. I write something I think is a funny joke and that night I find out if it’s a funny joke.

OB: So do you have anything you want to plug? Any friends, any restaurants you’ve been into?

KK: What am I going to plug in the Milwaukee Record? You know what…hey, Milwaukee, you should definitely come to Crawford’s Chicken in Burbank, California because it’s real good! On the off chance you find yourself visiting Los Angeles and you’re in the suburb of Burbank, there’s an old karaoke bar that now has chicken. I went there last week and it was real good, so give it a shot! I don’t know what to plug.

OB: Well, is there anything you’re looking forward to doing when you’re in the great city of Milwaukee?

KK: Uh, delivering a hopefully more sober set. I don’t know if I can show my face at The Vanguard again. 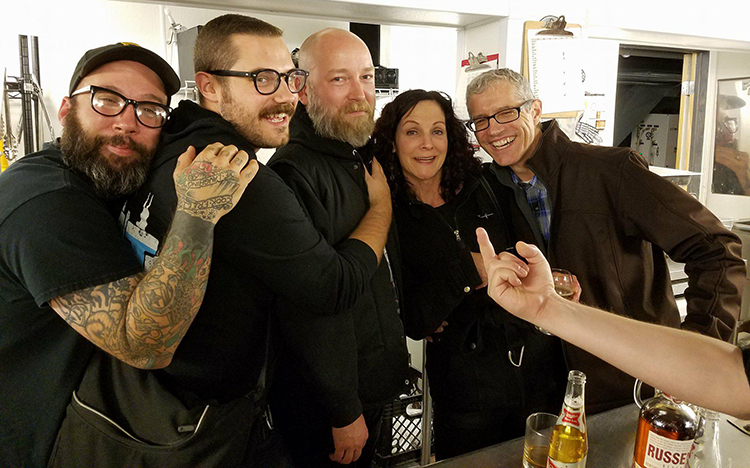 OB: I’m sure you’re very welcome there. Everyone there loves you. They talk about you a lot, actually.

KK: Okay, well maybe a few beers and a sausage over at Vanguard and restore my reputation among those good folks. We’ll right the ship. I think it’s going to be a fun time, but I can’t say exactly what my plans are going to be that night. Just breathing in and out for one night.

OB: Then a couple [shows] in Madison, eh?

KK: Yeah, Milwaukee’s before Madison and then I’m playing with those Arms Aloft boys out in Eau Claire. Do you want to plug anything [happening with Masked Intruder]?

OB: The dudes are recording right now. That will come out eventually and then we’ll do some stuff about it. That’s about it.

OB: You can say whatever you want.