Have you ever seen Detroiters? Man, that show was unbelievable! Seriously, it might be the best half-hour television comedy of the last 10 years. That’s up for debate, of course, but it was hilarious. How did Detroiters only last two seasons before getting canned, but Comedy Central keeps renewing garbage and churning out new bottom-of-the-barrel bullshit without a second thought? So dumb. Don’t get me wrong…I’m so happy to see Sam Richardson’s star continuing to rise. And sure, Tim Robinson’s sketch show on Netflix (I Think You Should Leave) is very good too, but it’s got nothing on Detroiters. It just needed one more season to find an audience! Sadly, that will never happen. It’s a travesty.

Though the series was unceremoniously canceled in late 2018, I’ve continued watching the series and its 20 flawless episodes in the years since its untimely and undeserved demise. Want to have something on in the background while laying around on a weekend? I put on Detroiters. Need to fill 22 minutes after a movie and before bed? Detroiters, my friend. Run into absolutely anyone you know with even the slightest attachment to Michigan? Talk their ear off about Detroiters, I say! Every episode is great, but in our frequent and repeated viewings, one of my favorites and most quoted is Season 01, Episode 4.

By sheer coincidence, “Devereux Wigs” is also the only episode of the series that makes any mention of Milwaukee. That’s honestly one more mention that I would’ve expected from a show about Detroit, so it’s a nice bonus. Without spoiling anything, the episode finds Tim and Sam thinking of ways to record a jingle for a local wig retailer who wants “real singers” on her commercial instead of Tim (who is bad at singing) and Sam (who is good at singing, but afraid to tell Tim he is bad at singing). Fortunately, a chance encounter with Freddie “Motown” Brown, a fictional crooner played by George Wallace—the legendary comedian, not the segregationist monster—solves their problem. 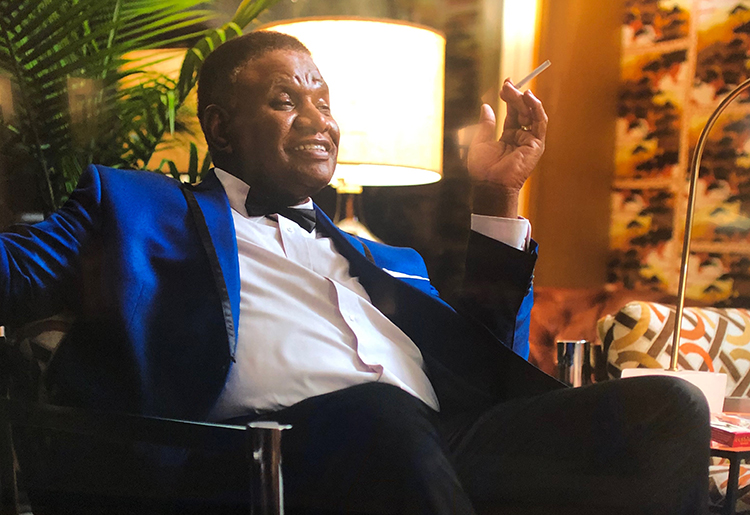 After hitting it off with Brown, the show’s leads reluctantly drive the singer back to his home in Lake Orion (“IT AIN’T THAT FAR!”) where they’re given a tour of the home the apparent Motown mainstay won in a poker game with the Four Tops. They see his collection of suits. Brown tells them the VERY GOOD story about what inspired him to write his hit song “Ocean Of Tears,” and he shows them some albums from his long and artistically varied recording career. 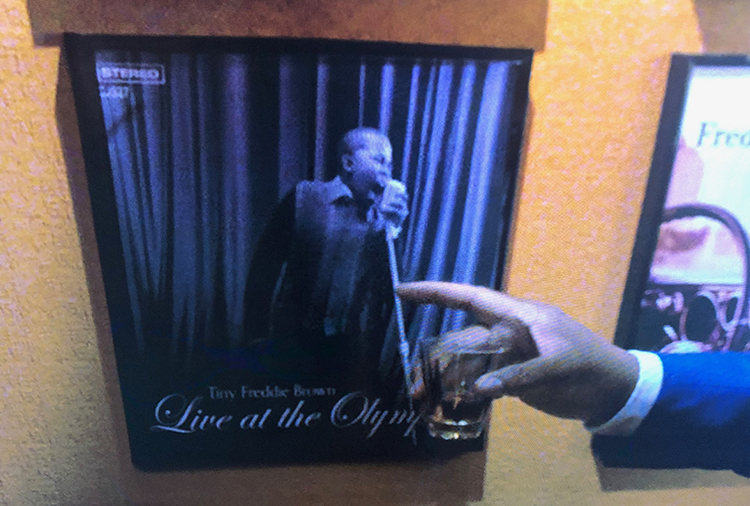 There’s his debut album, released under the name Tiny Freddie Brown when he was just 12 years old. 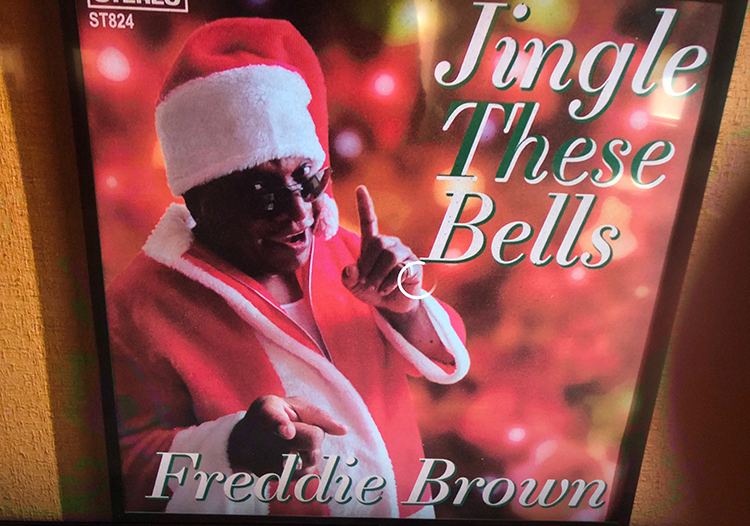 There’s a Christmas album, Jingle These Bells, where “all the songs are about Santa doing nasty.” 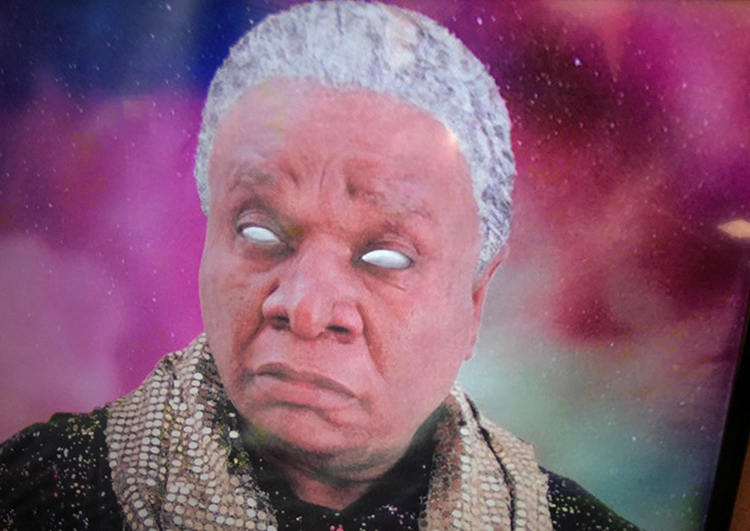 And there’s Brown’s terrifying “alien alter ego” Astro Freddie And The Aliens, which even scares him when he looks at it. 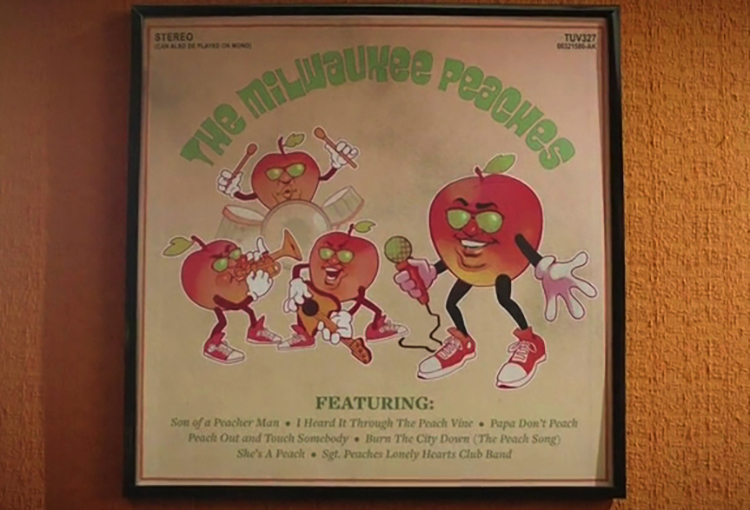 Finally, this trip down memory lane ends with a project called The Milwaukee Peaches. Brown explains:

“California Raisins. Y’all remember that? Well, we did a less racist version of that called The Milwaukee Peaches. Needless to say we didn’t sell a lot of those albums.”

And that’s pretty much it! It’s like, eight seconds of dialogue and one incredible album design. However, since (as I’ve already mentioned) I watch Detroiters a ton, I’ve been doing some thinking about this fruit-influenced and entirely fictional doo-wop group in recent viewings.

Brown called The Milwaukee Peaches a “version” of the California Raisins, which I take that to mean they came along shortly after the Raisins’ start in 1986. Based on the track list, it’s safe to assume the group specialized in peachy versions of existing songs in popular culture. Here’s are the songs listed on the front of the LP jacket.

Like I said, The Milwaukee Peaches is not a real project. However, I would pay good money (or “good money” by regional entertainment publication co-owner standards) if someone from Comedy Central or Broadway Video or whatever could hook us up with this album cover mock up. Or if any artists out there think they could accurately reproduce this for me, shoot me an email. Finally, if any bands out there want to take a crack at recording a version of what they think The Milwaukee Peaches’ song “I Heard It Through The Peach Vine” might sound like, I’m totally down to write some lyrics and even take a crack at vocals. Let’s talk!

That failing, just watch Detroiters however you’re able to (Paramount Plus has it now, I think) and imagine a world where Freddie Brown and The Milwaukee Peaches exist. Wouldn’t that be peachy?