Less than three years ago, Jeff Spankowski was just the funny guy at work. With no awareness of Milwaukee’s comedy scene, he had no real aspirations of doing anything in the realm of comedy. That was the case until he did his first open mic. Since first stepping on stage, the local comedian has quickly endeared himself to fellow comics and local audiences alike. Along the way, his material has developed and he’s eagerly accepted any opportunity that’s come his way.

Not long after that unlikely outset, Spankowski now hosts a weekly open mic at Up & Under Pub, and he also hosts and produces the semi-monthly Twisted Laugh comedy show at Twisted Path Distillery. Before this Wednesday’s Twisted Laugh showcase, Milwaukee Record talked to Spankowski about his start in stand-up, his goals, and why it’s important to make the most of chances for more stage time.

Milwaukee Record: How long have you been doing stand-up?

Jeff Spankowski: The first time I performed was almost three years ago. I just sort of started, and when I went up for the first time, I just loved it. It took me a little while to get into it. After that first time, it took me another month before I hit up another open mic. Then two weeks, then one week, then I was going every week for a while. I was working as a manager at Jimmy John’s at the time and I was like, “I’m tired of working late nights.” I was tired of just working and then going home and not doing anything else. So I quit my job to pursue comedy more, and I started going out every single night to try to get up as much as I could.

MR: So you went in without really knowing any other comics in the scene. What was the acceptance like early on? Where comics quick to adopt you as one of their own?

JS: Yeah, kind of. Right away, there was a comic, Drew [Flagge], who kind of poked fun at me—not in a mean-hearted way, but in a teasing way—immediately the first night I went up. That already felt like acceptance. The next open mic, he talked to me and a couple other comics talked to me. I was really shy and didn’t really open up initially, but eventually I got more comfortable. Everyone was very accepting.

MR: What ultimately prompted you to make the move from open mic regular who performed on other people’s shows to hosting your own showcase? How did the opportunity come about and how did you know you were ready for it?


JS: It worked out really well. A lot of my opportunities in comedy came from me seeing the opportunity and just jumping on it right away without questioning it. I run a weekly open mic because one night, a host wasn’t feeling it and said “You know what, I’m done.” I was right there and said “Hey, I’ll take your mic! I’ll take it off your hands.” By running that, I got comfortable hosting and running a room. Then I saw that someone was already running a show at Twisted Path for four or five months, but they left town to move to L.A. Before they left town, I hit them up and asked if anyone was doing anything at that room. They put me in touch with the owners, and then we set up some dates.

I started the show because I wanted to be able to meet other comics, give them opportunities, and giving people in Milwaukee another opportunity to see local comedy. One of the downfall of our scene is that not a lot of people know much about local comedy. We don’t have a comedy club here, so you have to make your own opportunities, build your own rooms, and find you own place because nobody’s going to set it up for you. I really lucked out with the Twisted Path because they make really great drinks there. There’s a really great speakeasy vibe. And it’s nice because it’s a free show, but they pay me so I can pay the comics. This way, I can persuade people with a free show, and I can get out-of-town comics from Chicago and Madison and touring headliners. You can see people who you normally have to pay $20 to see in a club setting for free in a run, relaxed environment.

MR: Shifting the focus back to you, what are a few of your goals for the near future and what are you driving toward in the long-term?

JS: My immediate goal is to start working at comedy clubs more. I recently lucked out and got my first weekend to host at Skyline coming up the weekend at the Twisted Laugh show. I’m trying to work at Comedy On State and some Chicago clubs. I want to get in some out-of-state festivals because I have been in a few comedy festivals, but all in-state. So I’d like to get out of the city, do some more traveling, and see the Midwest. If I could reach one of the coasts to perform in a year or two, that’d be amazing. And the ultimate goal is to one day become a headliner and make money doing this. I’d definitely have to move to a bigger city and I’m looking at either Chicago or New York. I don’t really have a goal to become famous or someone who has a ton of specials, but if I could make decent money and be really good at what I do, that’s what I’d love. I’d just like to be funny and good at the craft.

MR: Is there anything else you’d like to add?

JS: I think a lot of people want to start comedy, but they just don’t know how. Honestly, I think the best advice is to just go for it. There’s no secret to doing stand-up comedy. It’s just going up there and taking your hits and learning, adapting, and fixing what you did wrong. You just have to get up on stage and say what you think is funny. A lot of people seem to want this perfect, right moment and are afraid to fail. You’re going to fail for years. I still fail regularly, but you just have to go for it. There are a lot of opportunities, so you just have to find them and jump on it.

Jeff Spankowski hosts The Twisted Laugh comedy show at Twisted Path Distillery the first and third Wednesdays of each month. This week’s show features headliner Joe McMahon (Chicago), Michael Meyers, and Christopher Schmidt. Each 21+ show is free, with doors at 7:30 and the show at 8 p.m. 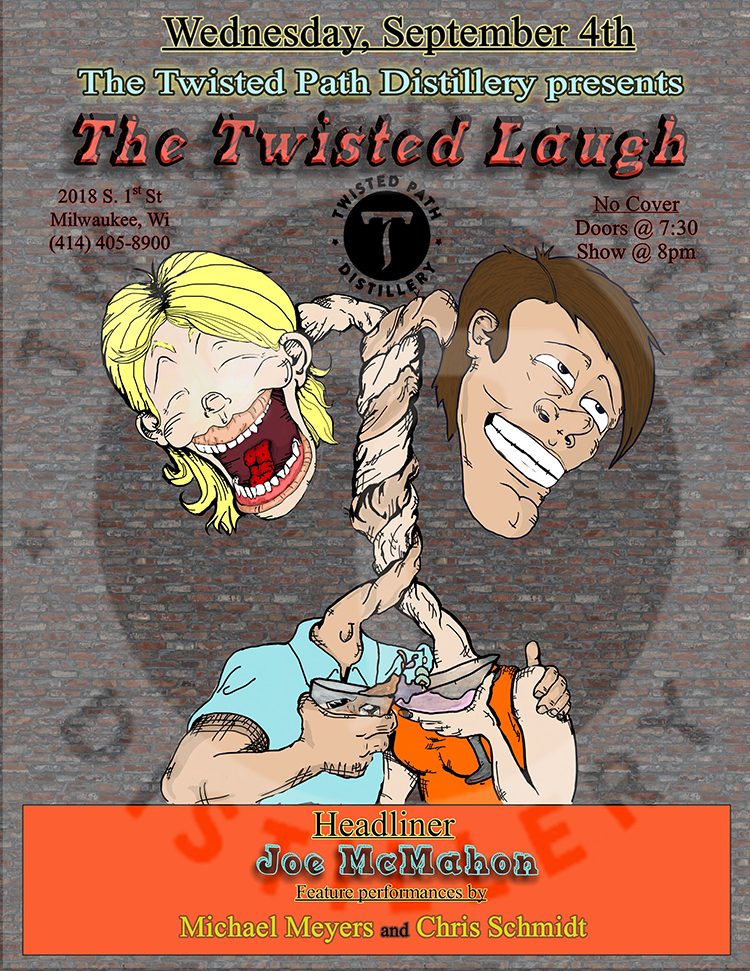