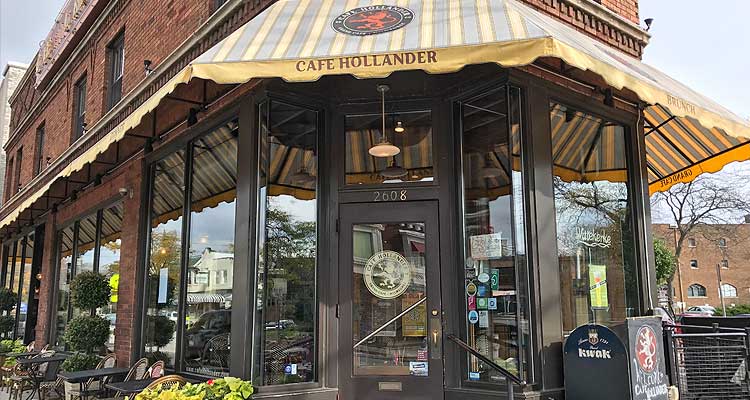 For the past decade, Cafe Hollander on Downer Avenue has served as a reliable standby of the East Side’s dining scene. Now, the longtime restaurant is planning to celebrate its 10th anniversary with some fresh renovations, including new floors, a redesigned bar area, and more. A press release is below.

Milwaukee, WI – October 31, 2016 – The Lowlands Group announces today that it will be closing Café Hollander on Downer Avenue for renovations beginning on November 6th, with a scheduled reopening planned for November 18th. The location was the first of the Lowlands Group’s grand cafés to open, and after 10 years, will be undergoing equipment upgrades in addition to facility improvements to match the efficiency and functionality of the group’s other locations.

“When we opened our Downer location 10 years ago, we couldn’t have imagined the success of the concept and the idea that we’d go on to create greatly expanded versions of Café Hollander,” said Dan Herwig, director of brand and marketing at Lowlands Group. “This renovation is needed to ensure that the next ten years are as successful as the past ten have been.”

While some aesthetic changes are planned, like new floors and a redesigned bar area, Lowlands Group plans on retaining as much of the original concept intact as possible. Updates will include increasing the number of tap lines from 24 to 37, all-new wood flooring, an updated bar and new kitchen equipment.

The renovation marks the 10-year anniversary for Lowlands Group, which opened the Downer location in November of 2006. When it reopens on November 18th, the Downer Avenue Café Hollander will launch with numerous events and offerings to celebrate the occasion, including a winter clothing drive.

The “Chili Weather Coat Drive” will be held on November 20th from 10am to 3pm. Anyone who donates a new or slightly used coat, or a set of cold weather gear, will receive a free bowl of chili and a Lowlands Brewing Collaborative Bourbon Barrel Aged Centraal Quadder beer as a thank you. Colectivo Coffee is also donating hot chocolate and coffee to warm up the participants of the coat drive, which will be held outdoors on Hollander’s patio

“We hope people will stop by for a bowl of chili before the Packer game to make a donation for a good cause,” said Herwig. “This coat drive directly benefits the Silver Spring Neighborhood Center, which runs amazing programs for Milwaukee’s Northwest Side.”

When the location reopens on the 18th, it will do so with an updated menu, including a reimagination of “The BTB,” a brie-tomato-basil sandwich that was on the original menu when the Hollander location first opened its doors. The reopening also marks the launch of the Lowlands Group’s annual “Holiday Bier” menu at all of their locations. The menu contains many rare and exclusive beers from around the world that the group imports especially for the holiday season.

“It’s a tradition in Europe for brewers to craft these amazing, small-batch beers that are only available for the holidays,” says Ileana Rivera, the beverage director for the Lowlands Group. “In some cases, we’re the only place in Wisconsin or the United States to taste these rare beers.”

The holiday beers will be available at all Lowlands Group locations on the 21st of November, including their own exclusive beer, Santa Rampage, a Belgian Dubbel brewed for them by Brouwerij Van Steenberge, in Ertvelde, Belgium. While beer selection varies by location, other exclusives include Kapitel Winter, Silly Noel, Piraat Barrel Aged Rum, St. Bernadus Xmas and Delirium Noel.

EVENT INFO
WHAT: “Chili-Weather Coat Drive” – Celebrating the Lowlands Group 10-Year Anniversary
WHEN: Nov. 20, 2016 – 10am-3pm
WHERE: Café Hollander – Downer, 2608 N Downer Ave, Milwaukee, WI
WHY: A Benefit for the Silver Spring Neighborhood Center
HOW: Free chili, beer and warm-up drinks with a donation of a coat or cold weather gear