In the beginning of May, Milwaukee was a city that somehow got by without having a single axe throwing establishment to its name. That noble, simple period of local recreation is now over. The city’s first axe throwing facility, Fling Milwaukee, opened May 19. Before the end of June, Milwaukee will get a second axe throwing bar when AXE MKE opens on the East Side. With those two businesses and a Waukesha-based axe bar called Lumber Axe that opened in April, there’s simply never been a better time in metro Milwaukee’s history to throw chopping implements through the air for the sake of enjoyment.

With the new (to us, at least) trend about to reach a fever pitch in Southeast Wisconsin, we decided to save any judgement until we tried axe throwing for ourselves. Less than a week after opening its wing inside of the newly-expanded Bounce Milwaukee, the owners of Fling Milwaukee were gracious enough to answer a few questions we axed…er asked about this unconventional sport and let us have a few throws.

Owners Becky and Ryan Clancy decided to bring axe throwing to Milwaukee after trying it in Montreal two years ago.

“I was really skeptical, but it was such a powerful thing and it was really addictive,” Becky Clancy says. “As soon as we got the approval for the expansion, we moved forward with axe throwing.”

They said the worked with the City Of Milwaukee to set safety regulations, and they built their facility to be compliant to National Axe Throwing Federation standards.

“We actually built our facility to specs that are higher than it has to be,” Ryan Clancy says. “There’s the National Axe Throwing Federation and a couple others. The NATF is the most stringent, so we went with them. It’s a lot of hoops to jump through, but it’s also a safety thing.” 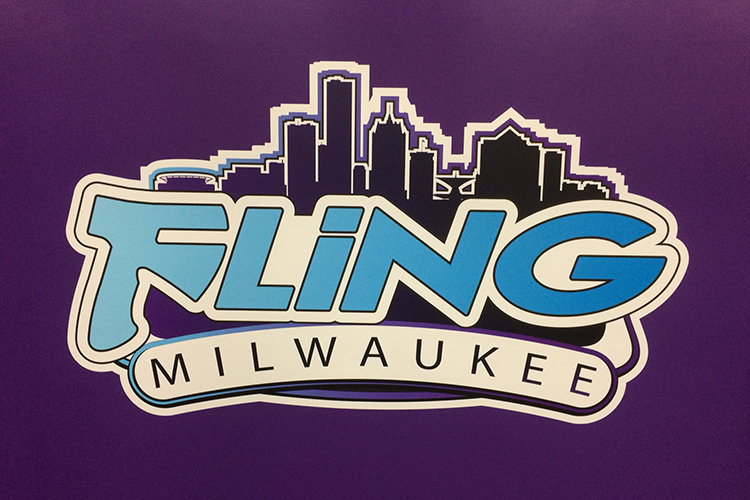 Fling Milwaukee has targets in four fenced-in lanes. It’s akin to a batting cage, except instead of hitting balls into nets, you’re whipping axes at painted wood boards. There’s fencing separating each lane, with the recommended throwing line well within the lane. Basically, one would need to make a concerted effort to hit someone for it to happen. If an accident somehow does occur, the owners say each staff member is being certified for First Aid treatment. Though Bounce serves alcohol, the owners say bartenders keep a close eye on how much patrons are drinking, especially those partaking in axe throwing.

“People don’t tend to come here to get wasted. It’s usually people looking for a good time and they’ll have a beer or two,” Ryan Clancy says. “So far, it’s been the same thing for axe throwing, but our bartenders are much more vigilant than most other bars because during the day, we have kids around. It’s not fun for our staff or the customers.”

There’s a wide variety of axes on hand. They range from small hatches that are made to be thrown at a distance with one hand, all the way to full-on axes with long handles that call for a two-handed, overhead approach.

“Our focus here is really on figuring out what axe works for you, but also what works best for the specific person,” Ryan Clancy says. “We’ve found it’s more on helping every thrower to find their own way to throw. It’s not really strength as much as finesse.”

While it’s easy to throw most of the axes, it’s tough to get them to stick at first. Each axe should have one full rotation before hitting the board, and release point and arc are both key elements to hitting the target. After initial difficulty, Ryan says people eventually figure it out. He likens it to the first time people go bowling.

“You know, you probably threw 10 or 12 or 20 balls and got nothing,” he says. “When you finally hit something, there was that visceral reaction. This is like that for adults. You tend not to stick them right away.” 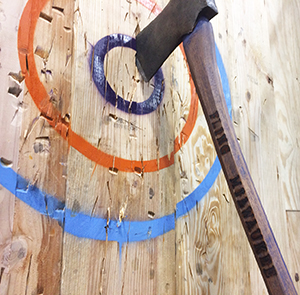 The introductory rate at Fling is $34 per person, which is good for a 90-minute experience that includes instruction and throwing. There’s also a two-hour alley rental for up to 12 people for $440. That includes two alleys, suite access, throwing, other gaming access, a game of laser tag, and a post-throw shot of liquor or bottle of water. Drop-ins are always welcome, but reservations are recommended. Large groups should schedule in advance. Eventually, Fling will also have league throwing, including a women’s league.

After our first throw, we were hooked. Our axes weren’t sticking, but that just made us want to keep hurling them at the board in an effort to get that first satisfying point. After we missed a few times, the owners and one of the trained employees gave tips like “move up” and “adjust your release point,” along with recommending specific axes that suited our throwing style. Within minutes, their help was paying off. More axes were sticking and for the first time since learning that axe throwing bars were a thing and that Milwaukee was getting two of them this year, we understood the appeal.

Yes, axe throwing bars might be all the rage in Milwaukee in the same way that Ramen, craft breweries, and mixed-use luxury apartments seem to be, but we’re on board. Before you cast judgement on places like Fling Milwaukee and AXE MKE, we recommend you give it a shot…or a throw. You just might enjoy it. It’s fun, and there could be other benefits to having axe throwing in the city.

“We’re really happy to have brought it to Milwaukee,” Ryan Clancy says. “In the event of a zombie apocalypse, we should be the safest place ever.”