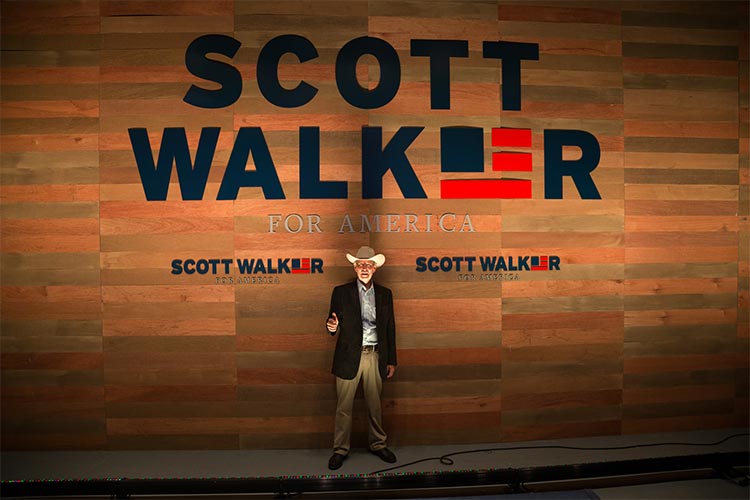 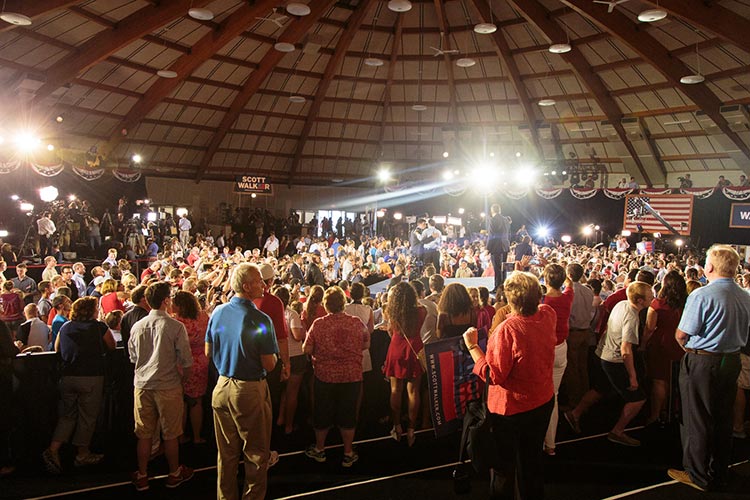 The Waukesha County Fair opens its gates tomorrow, and similar to how the Stones warmed up the Summerfest grounds, Scott Walker—now an official 2016 presidential candidate—drew the masses to the fairground’s Waukesha County Expo Center Monday night. Described by CNN as a “Republican enclave just outside of Milwaukee,” Waukesha hosted thousands of Walker supporters who waited for hours in the hot, humid weather for a seat. “Enjoy this momentous occasion,” an elderly volunteer told us as she fastened our entry wristbands. 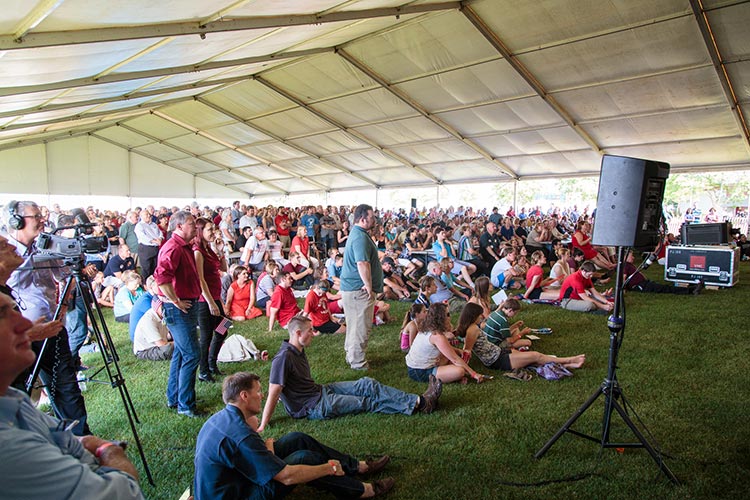 The Expo Center filled up quickly, and with an hour until kickoff, overspill fans were redirected to a nearby tent where they tried in vain to cool themselves off by fanning themselves with Walker literature. Two people were reportedly treated for heat exhaustion. A movie screen broadcasted the action from inside. 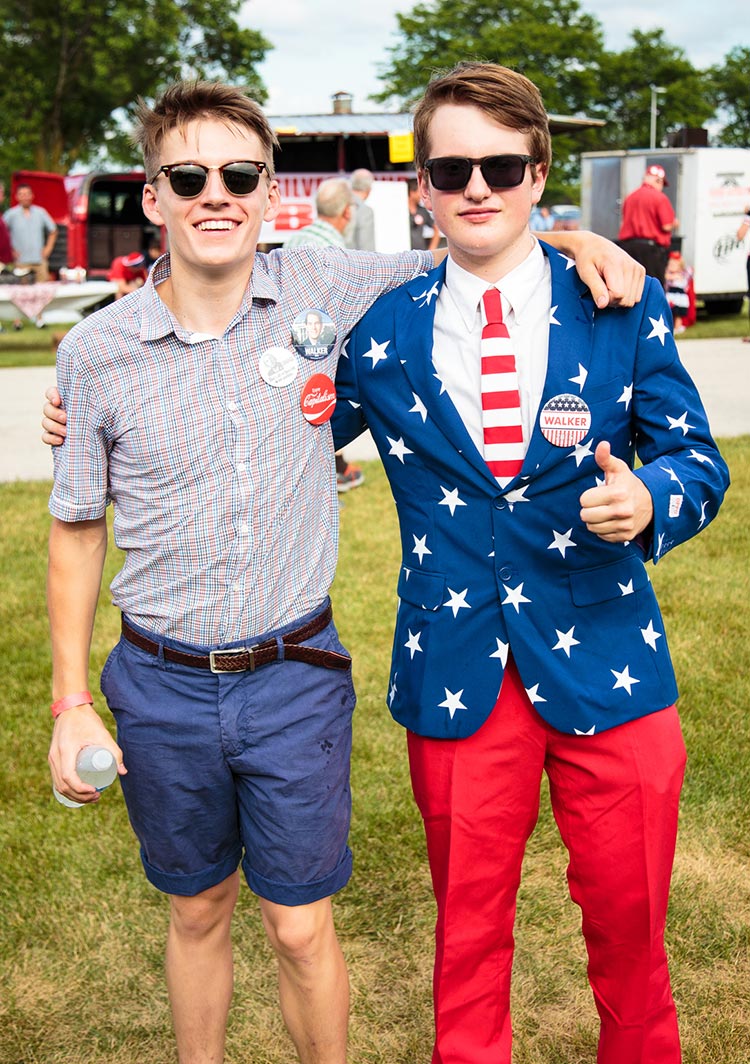 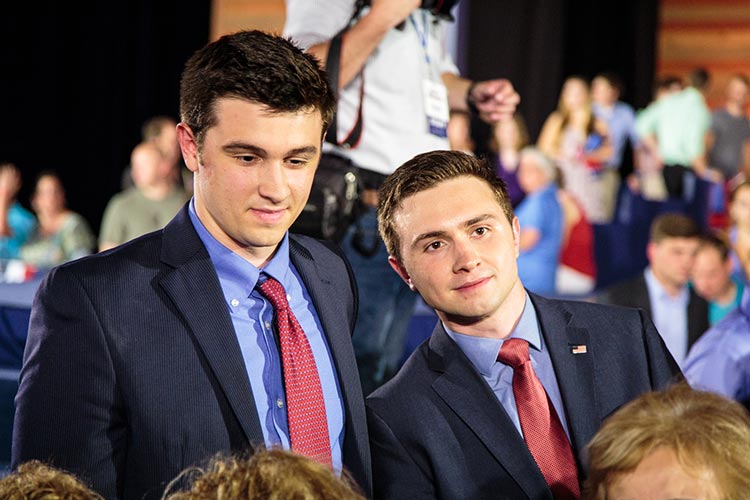 Around 4:30 p.m., a number of character witnesses took turns on stage to share funny anecdotes and sing praise for Walker. His sons told how dorky dad liked to wear jean shorts, tube socks, and sing karaoke. Speaking of, wife Tonette later told all of how Walker made a move on her at a karaoke night by slipping her a note written on a napkin on his way out the door. 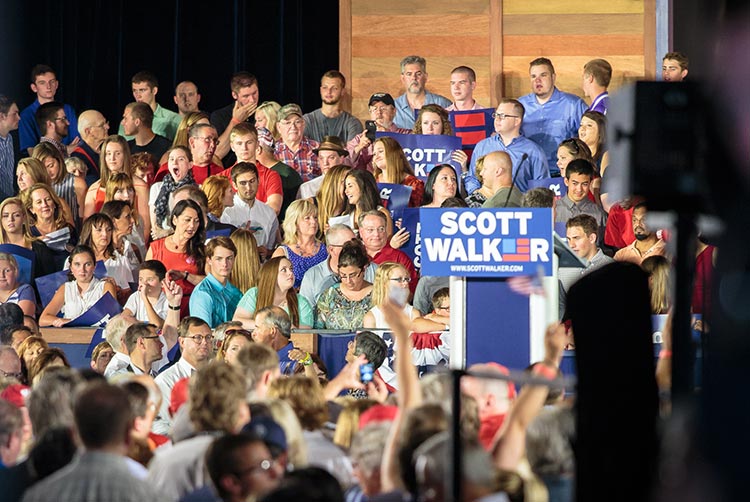 Other guests include Rachel Campos-Duffy, wife of U.S. Rep. Sean Duffy and former cast member of The Real World, who took the stage to endorse Walker and try out some partisan comedy. “Scott Walker likes to take long rides on his Harley. Hillary takes long rides…on the backseat of her limousine. She hasn’t pumped her own gas since Al Gore claims he invented the Internet!” Big laughs. “Scott has been married to Tonette for 24 years,” Campos-Duffy said, keeping the roll going. “24…24 is Bill Clinton’s favorite age.” A loud “ooooh” at the dis. She went there! 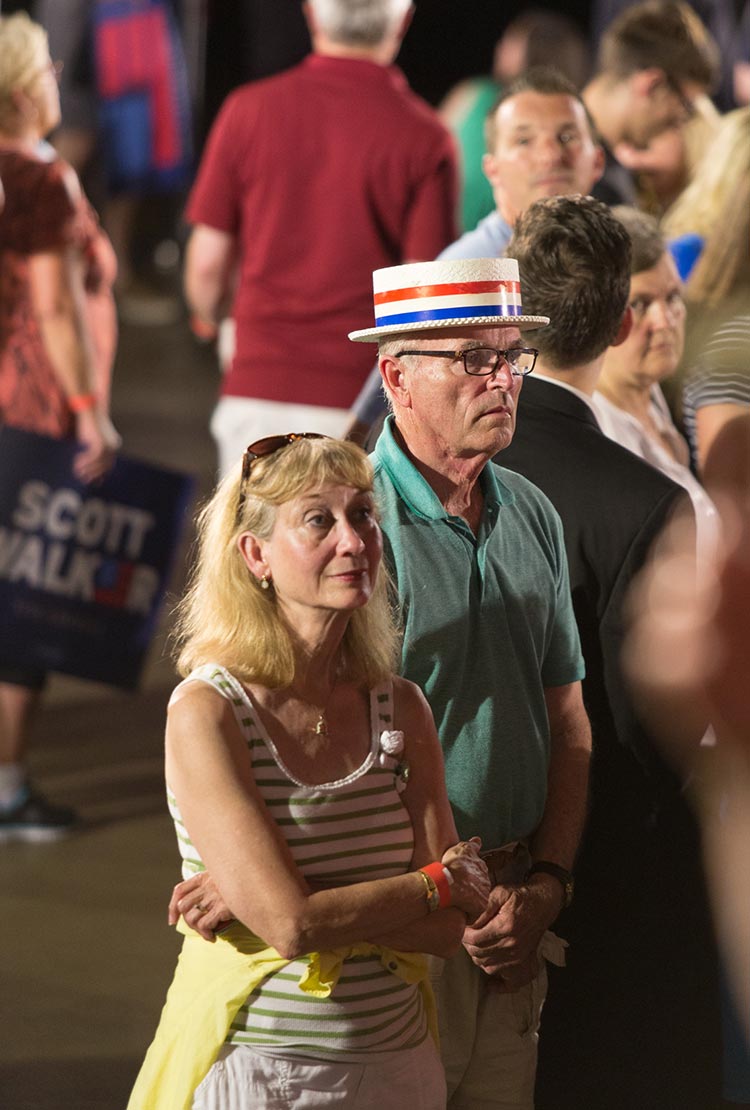 The energy was palpable as a couple of new Walker campaign ads premiered, much like a new movie trailer at the San Diego Comic Con. Lieutenant Governor Rebecca Kleefisch gave a few words, reminding the crowd of how Walker fought the “Recallers” and the “protestorate” like “a David to Goliath!” 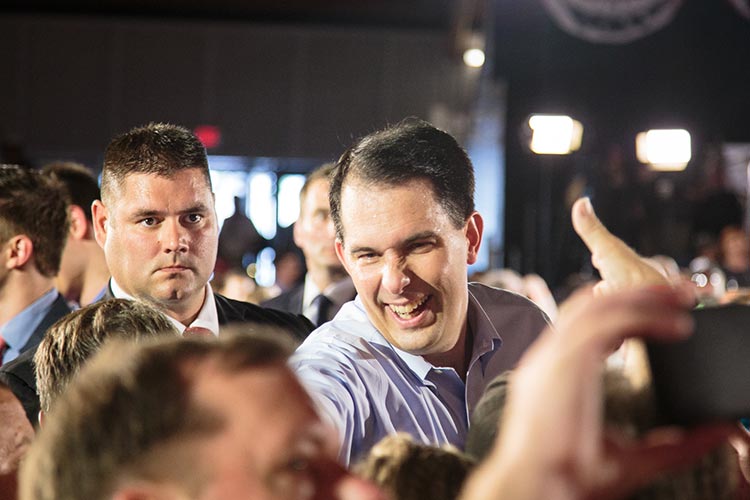 After Kleefisch fired the crowd up, Walker was introduced by Tonette. Rascal Flatts’ cover of “Life Is A Highway” blared. The audience chanted, “We want Scott! We want Scott!” He was wearing black slacks and a blue button-up shirt, the sleeves slightly rolled up. The first line of his speech was: “I love America.” Walker made no effort to hide the controversy his career as Wisconsin Governor had garnered him, and proudly flaunted his policies in a speech that ran about 30 minutes. 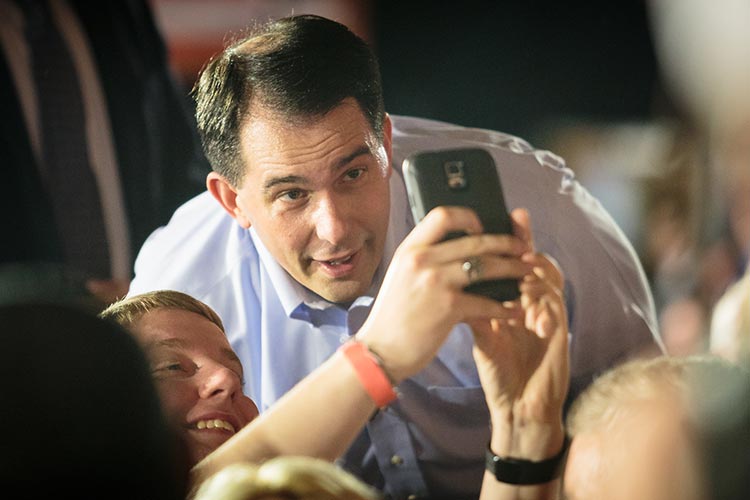 After his speech, Walker was mobbed by fans asking him to stick his head into their selfies or have him sign one of his campaign signs. Walker and his family slowly made their way down the runway, sweating profusely, fist-bumping, high-fiving, and shaking a sea of outstretched hands. 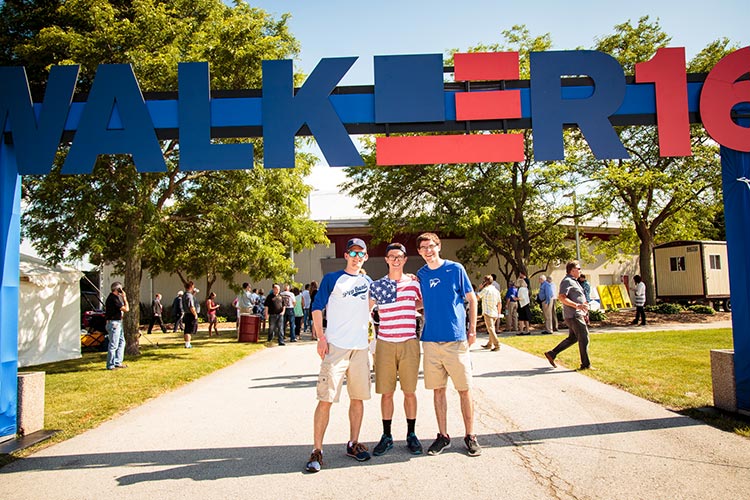 “Absolutely, he has a good shot at the nomination,” said Walker supporter Evan Beuscler. And why would he be a good president? “Look at what he’s done in Wisconsin, saving tax payers’ money. He respects how money is spent.” “He understands the bottom line,” his friend Steven Stiller added. 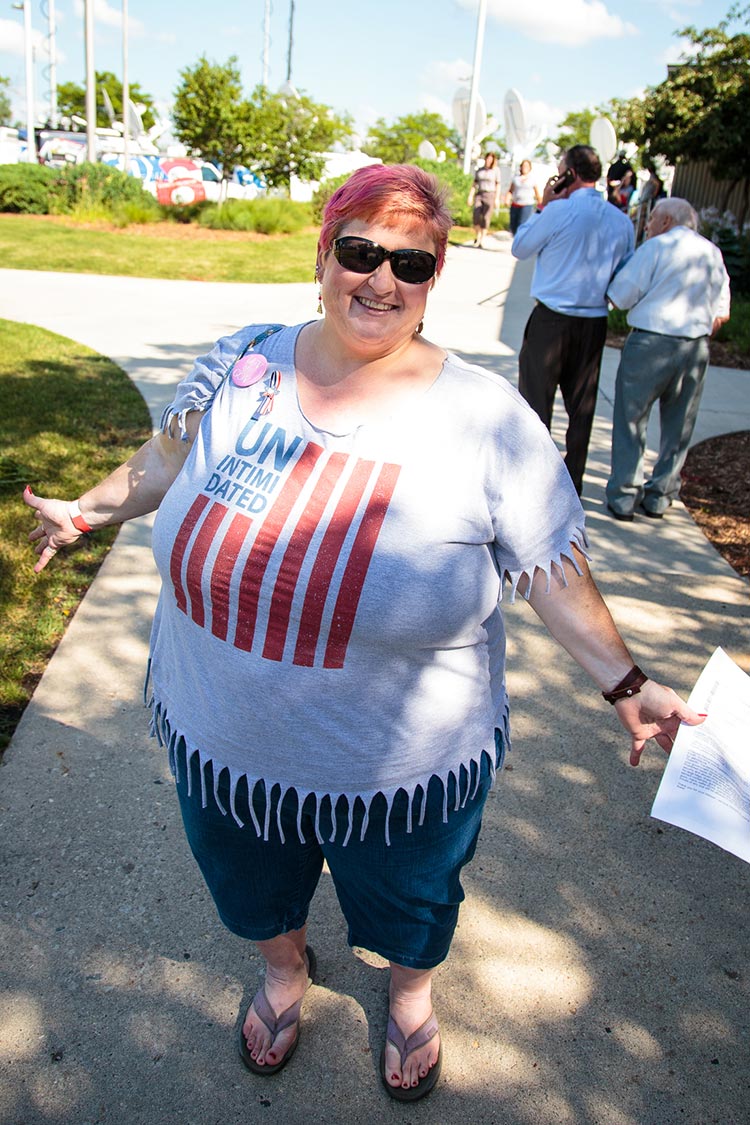 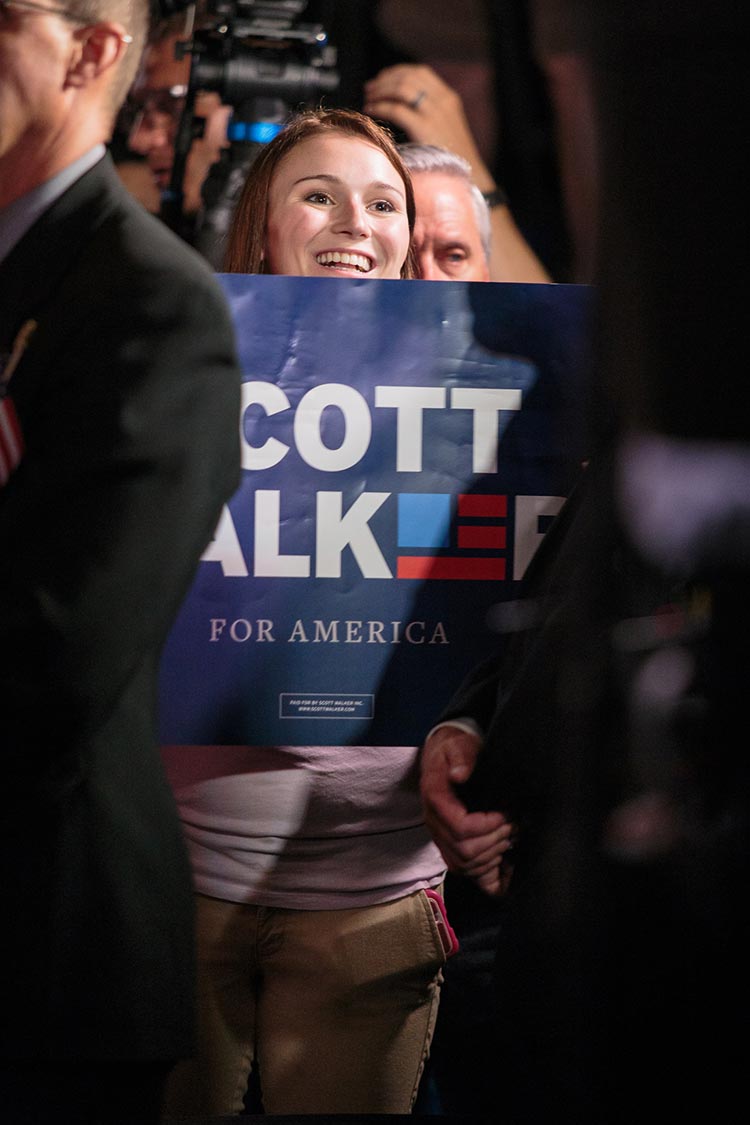 Passion ran deep and the crowd was clearly star struck at the prospect of a future President Walker. The 15th Republican candidate to join the presidential horse race, Walker will go on to campaign in Nevada, New Hampshire, South Carolina, and Iowa this week. 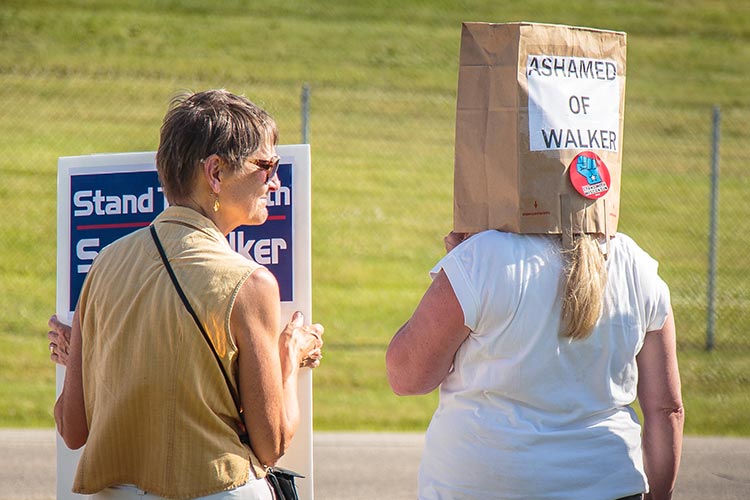 Not everyone in Waukesha was thrilled by Walker’s aspirations. A row of protestors, contained in a fenced area on the other side of the Expo Center’s parking lot, chanted and held signs. An airplane slowly trolled overhead towing a sign that read “Scott Walker has a Koch Problem.” 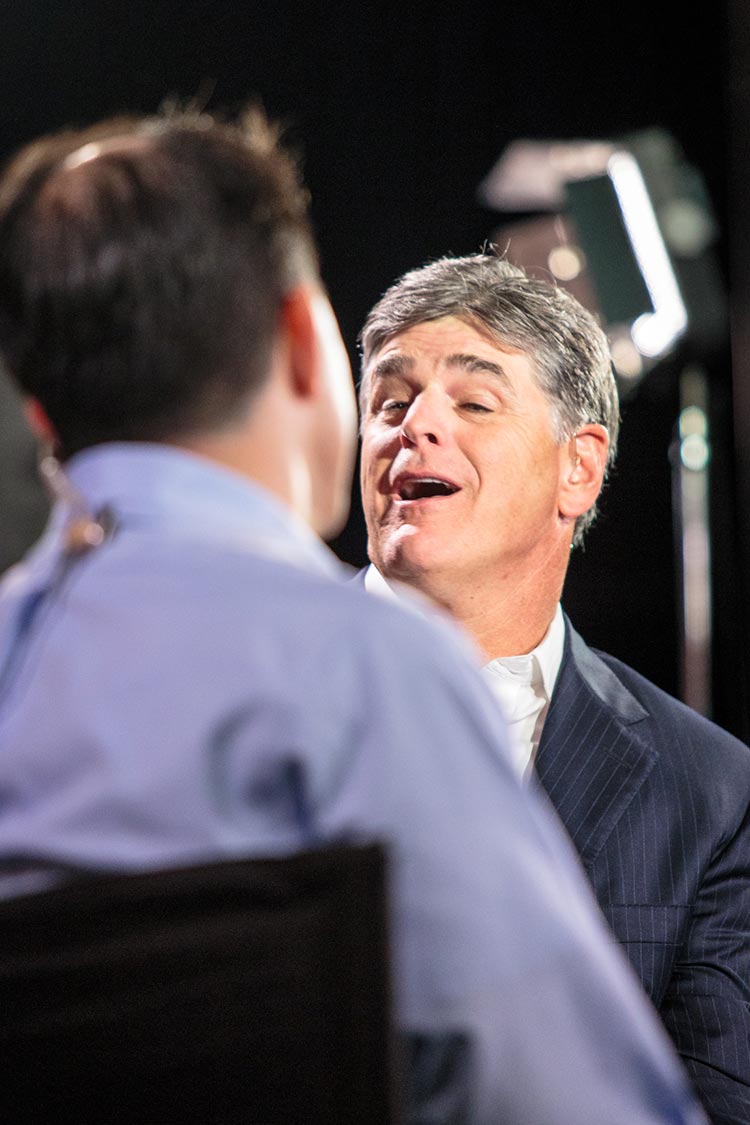 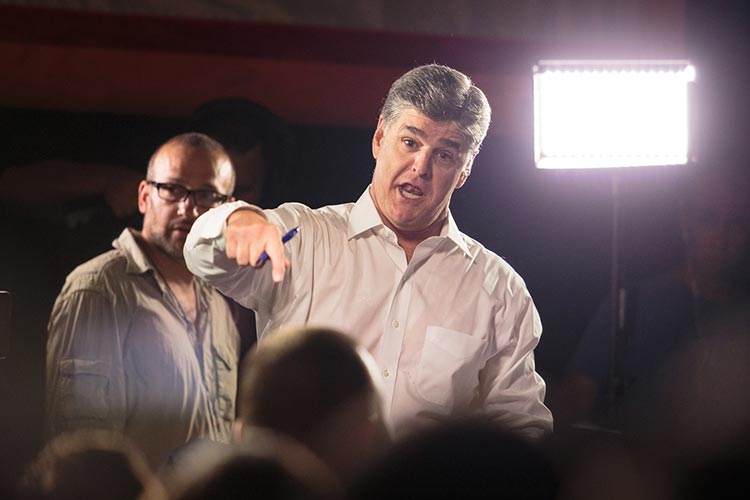 “I’m just going to ask you one favor,” Hannity told the crowd while waiting for the show to start. “Turn Wisconsin red!” The crowd cheered loudly. “It already is!” an audience member shouted back. 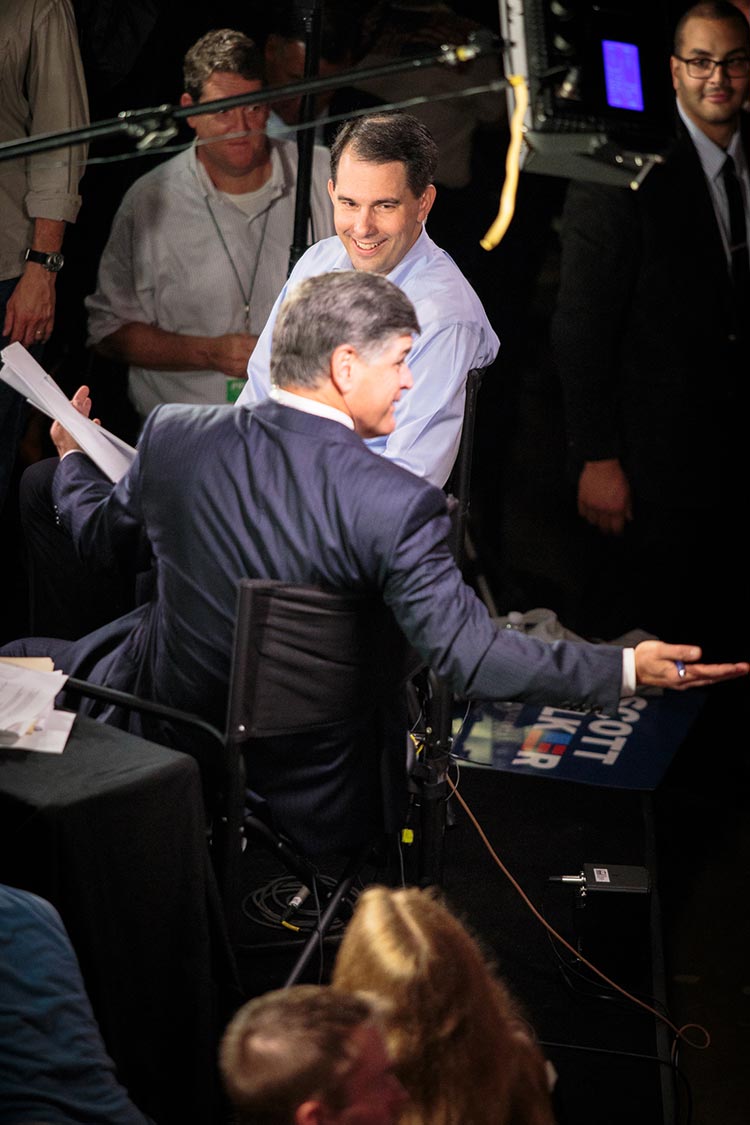 The filming of the show was an odd experience. Walker and Hannity sat with their backs to the audience, having an interview inaudible to most of the crowd. A couple hundred Walker supporters stood murmuring and occasionally waving Walker signs and cheering when prompted by one of Hannity’s people in the background. 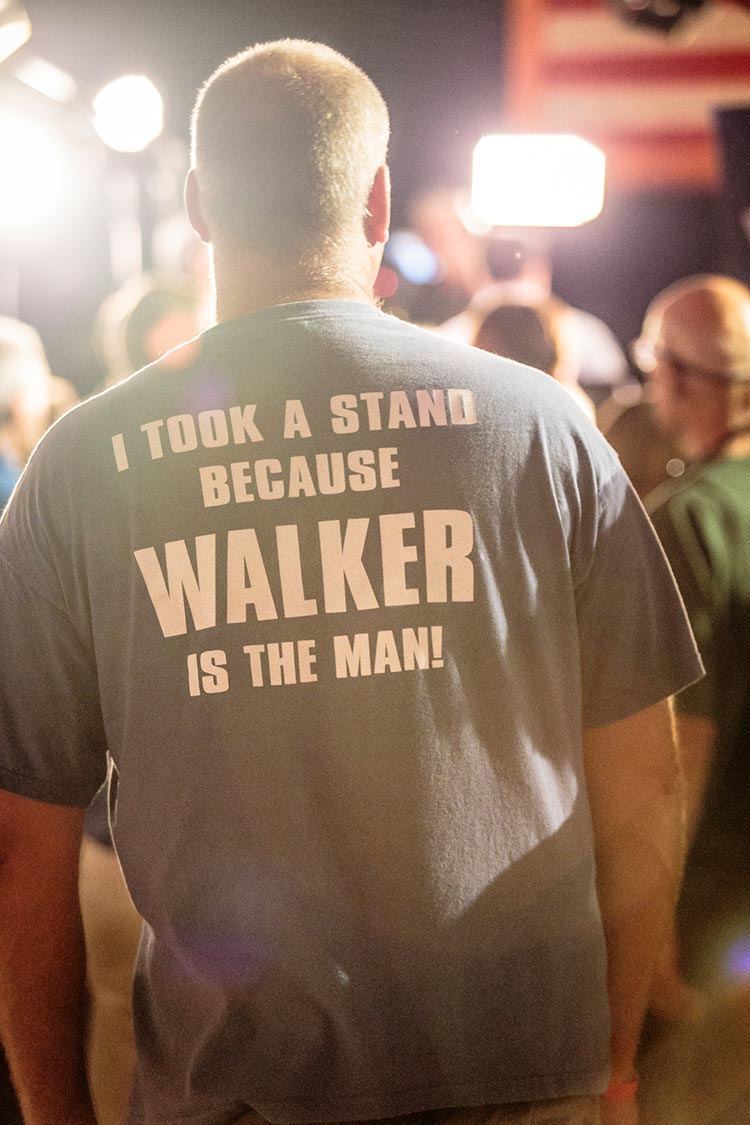 “There is no greater friend, or greater enemy than the United States of America,” Walker told his audience during a climax of his speech, talking about a need for tough foreign policy. The crowd responded by chanting “USA USA USA! USA USA USA!”