The Wisconsin Department of Transportation (WisDOT) held two “public involvement meetings” this week to present and discuss the latest updates to its proposed expansion and widening of the Stadium Interchange and the East-West corridor of Interstate 94. This was the second round of public involvement meetings in recent months, with the first round coming in December 2021.

These open house-style meetings are an odd blend of super-informative and quietly maddening. Easels displaying designs and studies and renderings and data are placed around the room, and people involved with the project are there to talk to the inquiring public. While some of it is kind of bizarre and jargon-y and some of it is total nonsense (see photo below), most of the information is helpful—even if how clearly it’s geared toward the desired outcome of expanding and widening the highway is painfully obvious. 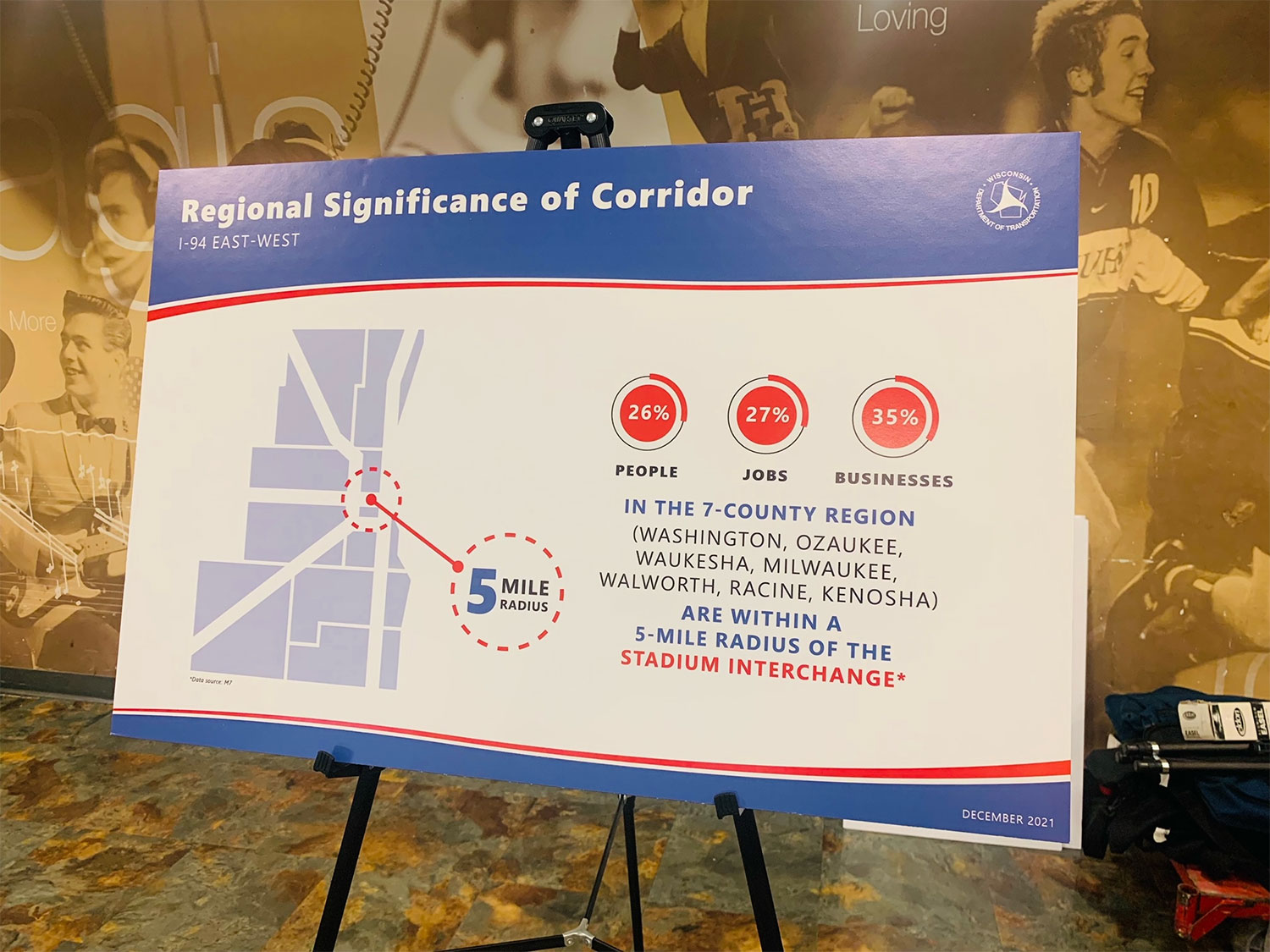 On the whole, the meetings are largely productive, and are the type of thing our government should be doing at the bare minimum to engage with constituents on megaprojects that will cost upwards of a billion dollars and reshape a city’s infrastructure for generations. People are given opportunities to submit feedback, and that’s important.

That’s important because that feedback appears to be making some kind of an impact. There’s no denying it: This project has improved over the past year.

Let’s rewind a bit. In April 2021, WisDOT announced that it would be conducting an additional review of the proposed expansion project that Gov. Evers had revived in 2020. This was good. It needed that additional review. The plans had not been updated from the previous iteration in 2016, and much more than just the leadership in the state had changed since then.

At the time of the December 2021 public involvement meetings, the big news regarding any shifts in plans was that a) WisDOT was meaningfully studying a six-lane option for the first time, b) both the six-lane and eight-lane options were going to cost a whole lot more than originally expected, and c) the cost difference between the six-lane and eight-lane options was not going to be all that great. Another big takeaway: the Stadium Interchange was going to be gigantic and it was unclear why it needed to be.

Now, the biggest difference from the December meetings to the recent June meetings is that there is now another option for the Stadium Interchange. This new “diverging diamond interchange” (DDI) proposal would cost $70 to $90 million less than the “hybrid” (read: unnecessarily large) option. 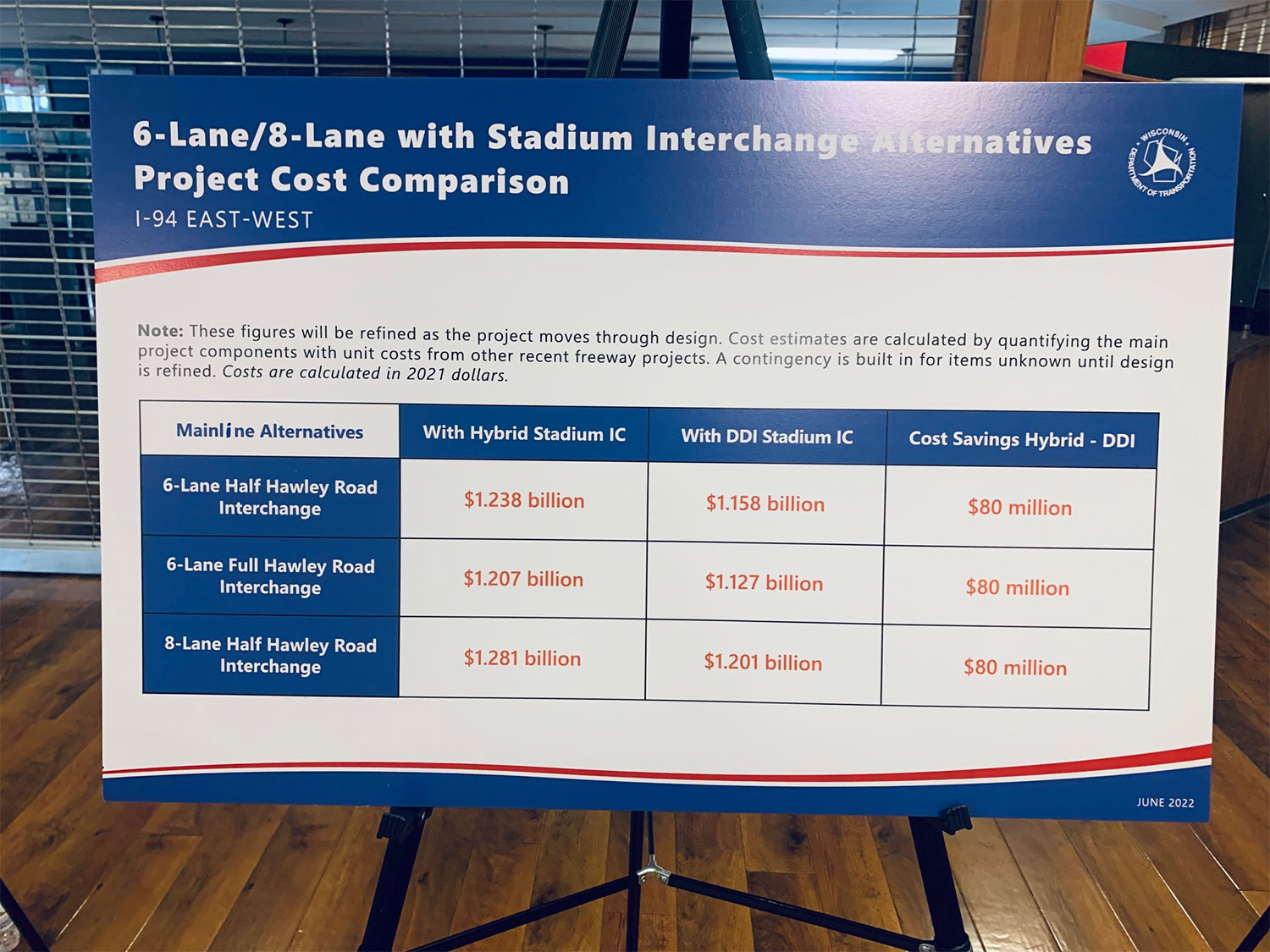 “At the December public involvement meetings, the thing we heard most was they wanted to see a shorter interchange,” said Michael Pyritz, spokesman for WisDOT. “The one that we were showing was taller than the existing interchange, so we had a lot of people express concern with that.”

Pyritz added that other recent data on how people are currently using the interchange suggested that a DDI option would be better suited for its future, especially as it relates to any possible changes for the Stadium Freeway (hold that thought).

Peter Burgelis, the recently elected Milwaukee County supervisor whose district includes much of this project, said these changes represent a “right-sizing” of the Stadium Interchange and said he was “encouraged” to see WisDOT “listening to neighbors and acting to revise reconstruction plans based on community input.”

“We have a once-in-a-generation opportunity to plan infrastructure with safer and smarter designs,” he said. “We don’t need to overbuild an interchange to support a freeway that goes to Wendy’s.”

Last year, Pyritz told me that the Stadium Interchange is the “main driver” of the cost of the project, so reducing the price of that big piece by tens of millions of dollars, while finding an option better suited for the community, is a significant win.

Also a significant win: the number of displacements (that’s WisDOTspeak for homes and businesses that would have to be destroyed to accommodate their plans) has been greatly reduced. At the 35th Street interchange, the number of displacements has been dropped to zero. Some remain at the 26th Street interchange, and just one remains along 68th Street, but there has been real improvement here. 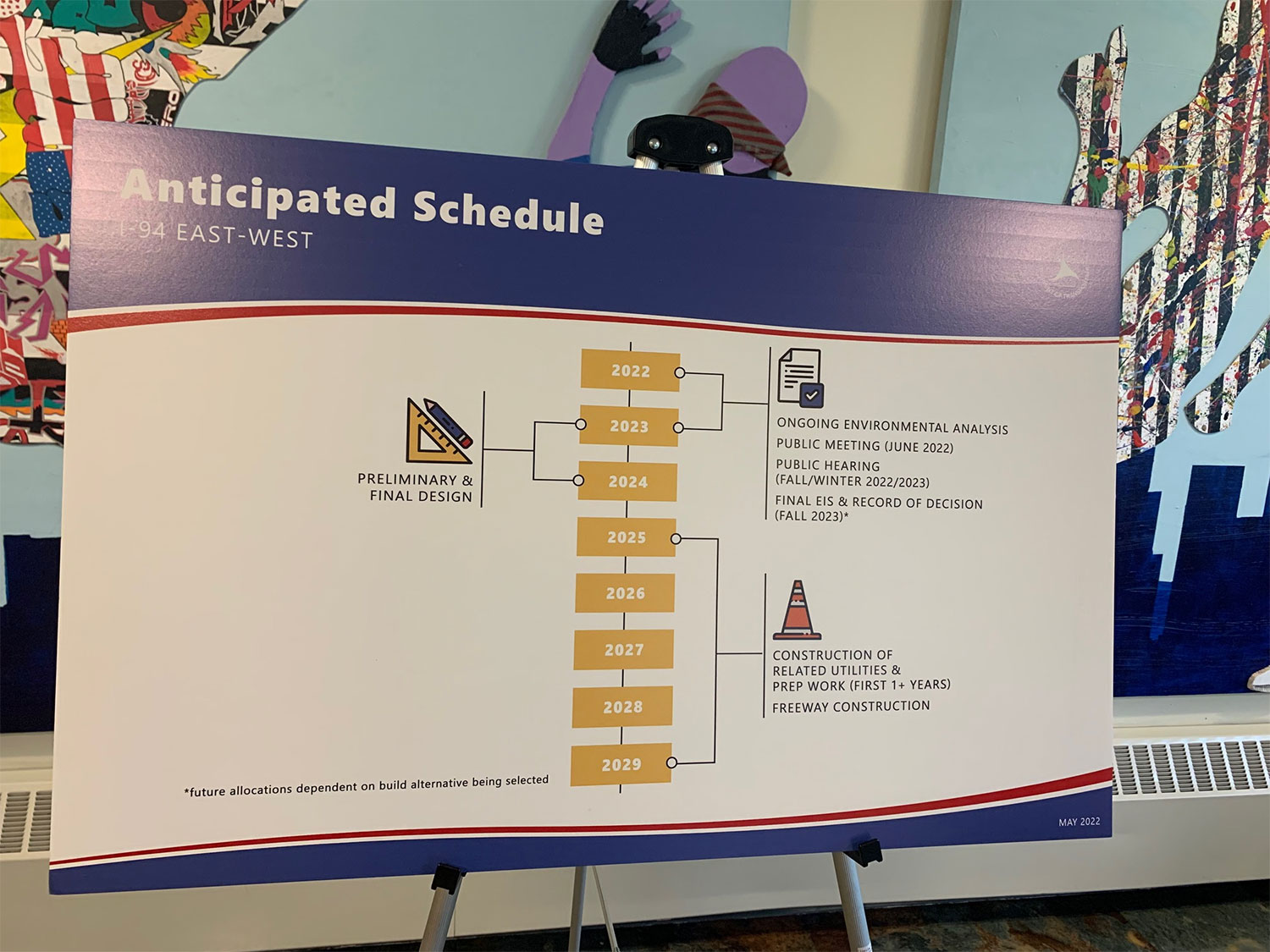 This is all encouraging. The future of this larger project is not yet set in concrete, and the feedback that WisDOT has received has meaningfully changed the trajectory of what’s being planned. This is all terrific.

But. The public hearing that was originally scheduled for “mid-2022” has now been pushed back to December, Pyritz said. That means any public hearing this might have at the Capitol in Madison would happen after the gubernatorial election.

This could, of course, complicate things. A guy whose family owns a company that does a significant amount of highway construction in Wisconsin is among the top Republican candidates running for governor, and who knows what his (or other GOP candidates’) priorities might be for a project like this? Perhaps things wouldn’t be all that different; this is Evers’ project now, after all. But it’s certainly a factor.

And election or no election, having “public involvement meetings” and not actual public hearings on an issue of this scale is not ideal.

Opposition to highway expansion continues to be vocal, and deserves to have its voice heard on this issue. The Coalition for More Responsible Transportation (CMRT), a group that includes MICAH (Milwaukee Inner-City Congregations Allied for Hope), Sierra Club Wisconsin, 1000 Friends of Wisconsin, and several community groups, held a press conference on Monday, renewing a call for a “Fix at Six” solution.

“This expansion hurts my neighborhood and other west and north side neighborhoods environmentally, commercially, and socially,” said Leland Pan, member of the Friends of Valley Park group and a resident of the Piggsville neighborhood that would be impacted by this expansion. “Highways have reinforced segregation and taken away resources from public transit that is sorely needed, all so a wealthier suburb can shave seconds and minutes off their commute. Let’s drop expanding the highway and start discussing what neighborhoods like mine really need—more local businesses, improved public transit, and clean and safe air, parks, and homes.” 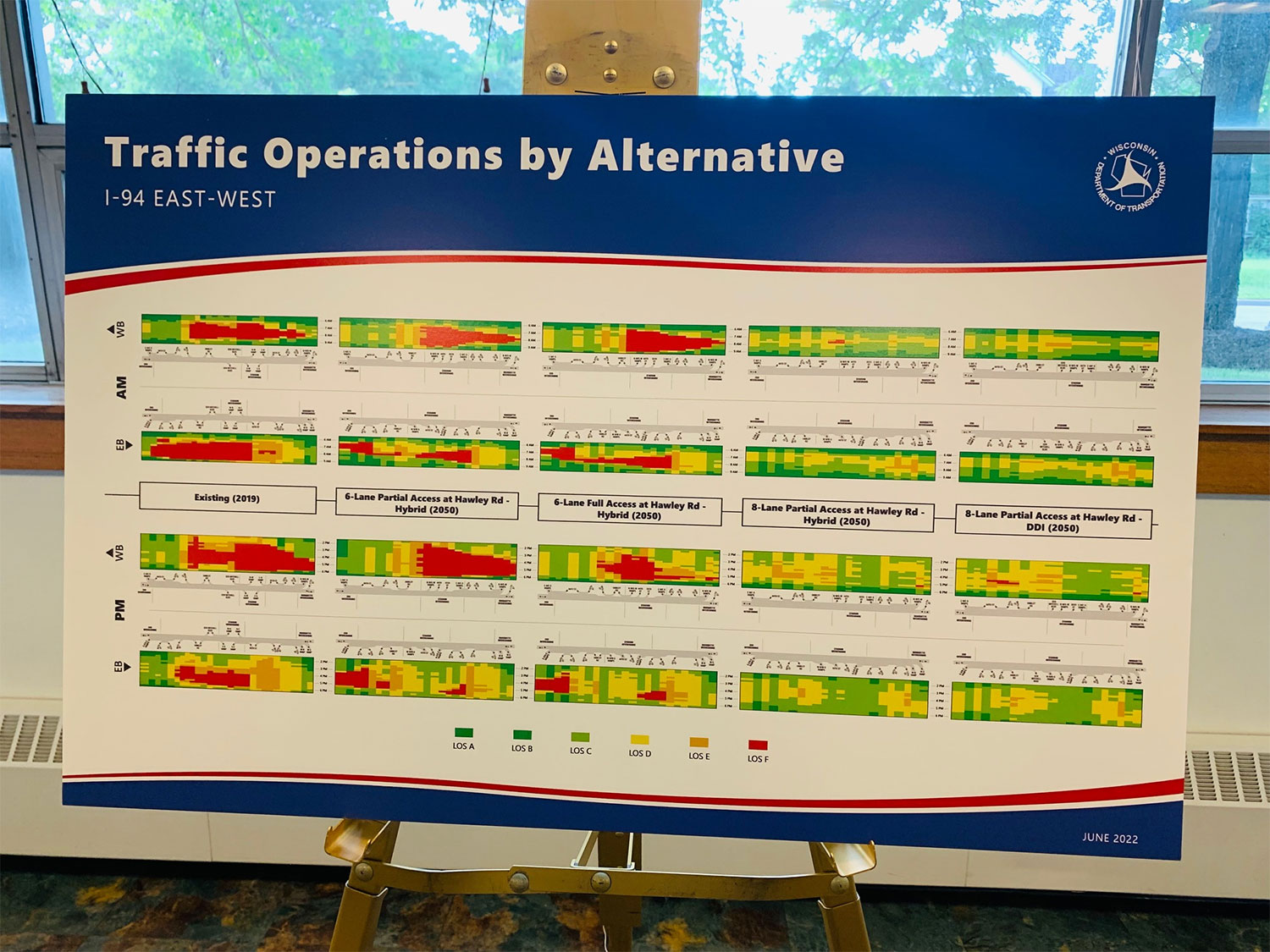 CMRT’s “Fix at Six” option calls for long-term multi-modal transit investment, including biking and walking infrastructure and an additional bus rapid transit (BRT) line south of the interstate, largely along National Avenue. For all of WisDOT’s improvements throughout this process, this option still remains a far better solution than what’s being proposed.

And then there’s the issue of the Stadium Freeway. News that the state, county, and city would be reimagining its future was welcome news. Exciting news, even. This would be a big, big deal for Milwaukee. But studying its future is going to be an 18-month process. There’s still a lot that’s unknown.

“I think it’s premature to say it’s going to be a boulevard or anything else,” said Burgelis, who supports the Stadium Freeway study and has also introduced a resolution at the County Board to back its transformation. “There are some geographical challenges around State Street with the (Menomonee River) and the train tracks and the street all in the same place in between two bluffs. So that’s going to be a challenge.” 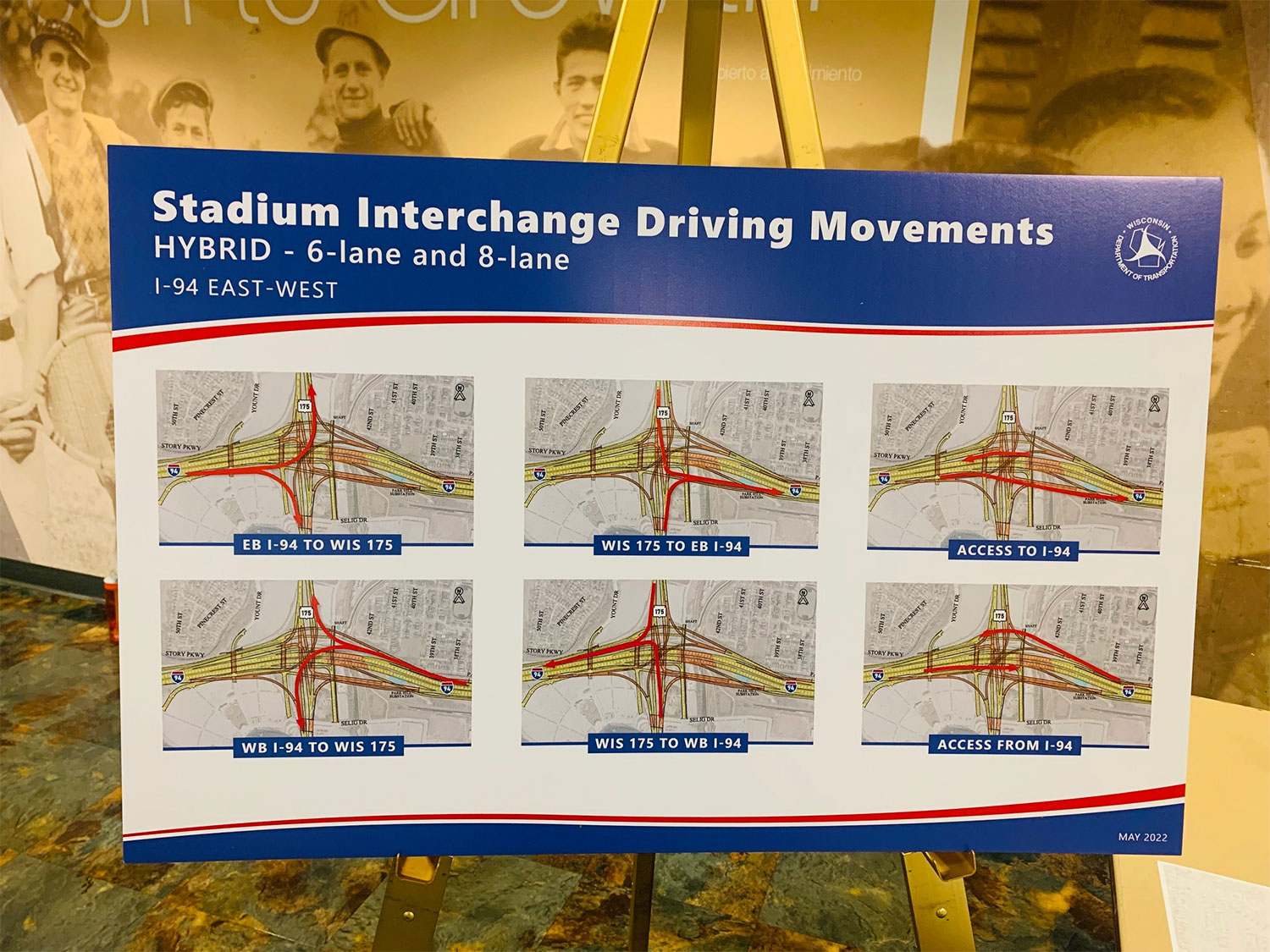 As it stands, this Stadium Freeway study and potential project is separate from what’s happening with the I-94 East-West corridor and the Stadium Interchange. Wisconsin Avenue essentially represents the line where one project ends and the other begins. I asked Pyritz whether it would make sense to merge these projects and bring the Stadium Freeway study into the fold in discussions about I-94. Here’s what he said:

“No. It would not make sense. The East-West (corridor) needs to be reconstructed. It is at the end of its life cycle. There’s no more maintenance that’s going to work. If we have a failure, that will be traumatic for the entire region. So what happens on 175? That’s very much a fresh idea that’s coming forward. The roadway itself is in better shape, there’s life within the roadway there and the structure there, so there’s a much longer shelf life for that roadway. What we’re looking at in the Stadium (Interchange), I mean, it was built when Hank Aaron was playing for the Braves. It’s time. We really are at that point.” 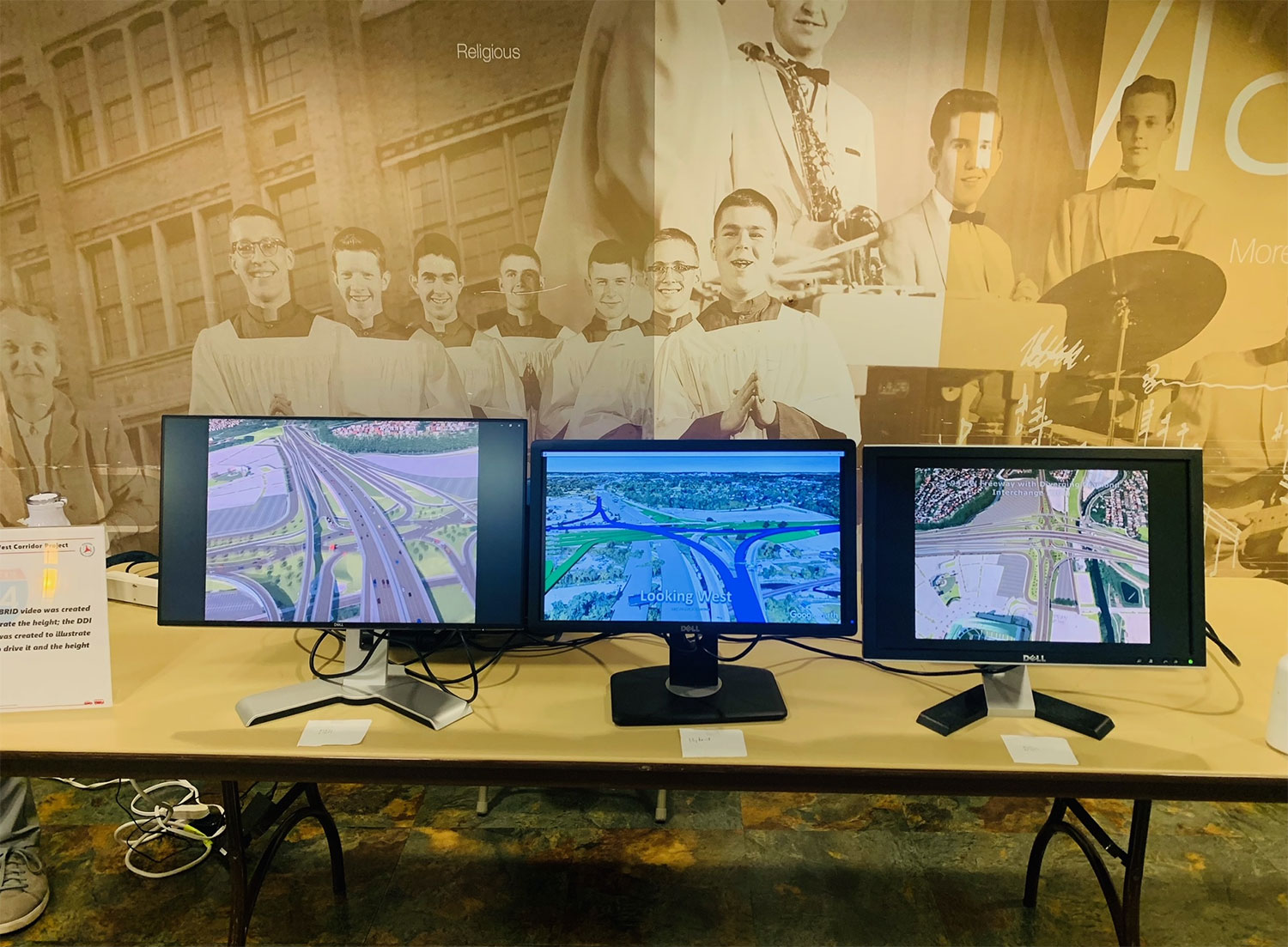 What’s next then? Building toward a public hearing that would likely be in December with a distinct choice made about what this project’s outcome would be—whether it be the six-lane or eight-lane option, whichever size is chosen for the Stadium Interchange, etc.

“But, a lot of that depends on what comes from these public involvement meetings at this point,” said Pyritz. “We want to take the information that we have, go through and further refine what our options are, and see if we can get to a spot where we would have a preferred alternative. And at that point with a preferred alternative, that’s what would then lead into the public hearing where the public would actually have the formal ability to comment on those plans, specifically. Instead of sort of having the equivalent of a buffet, you’d actually have a plate and say yes or no.” 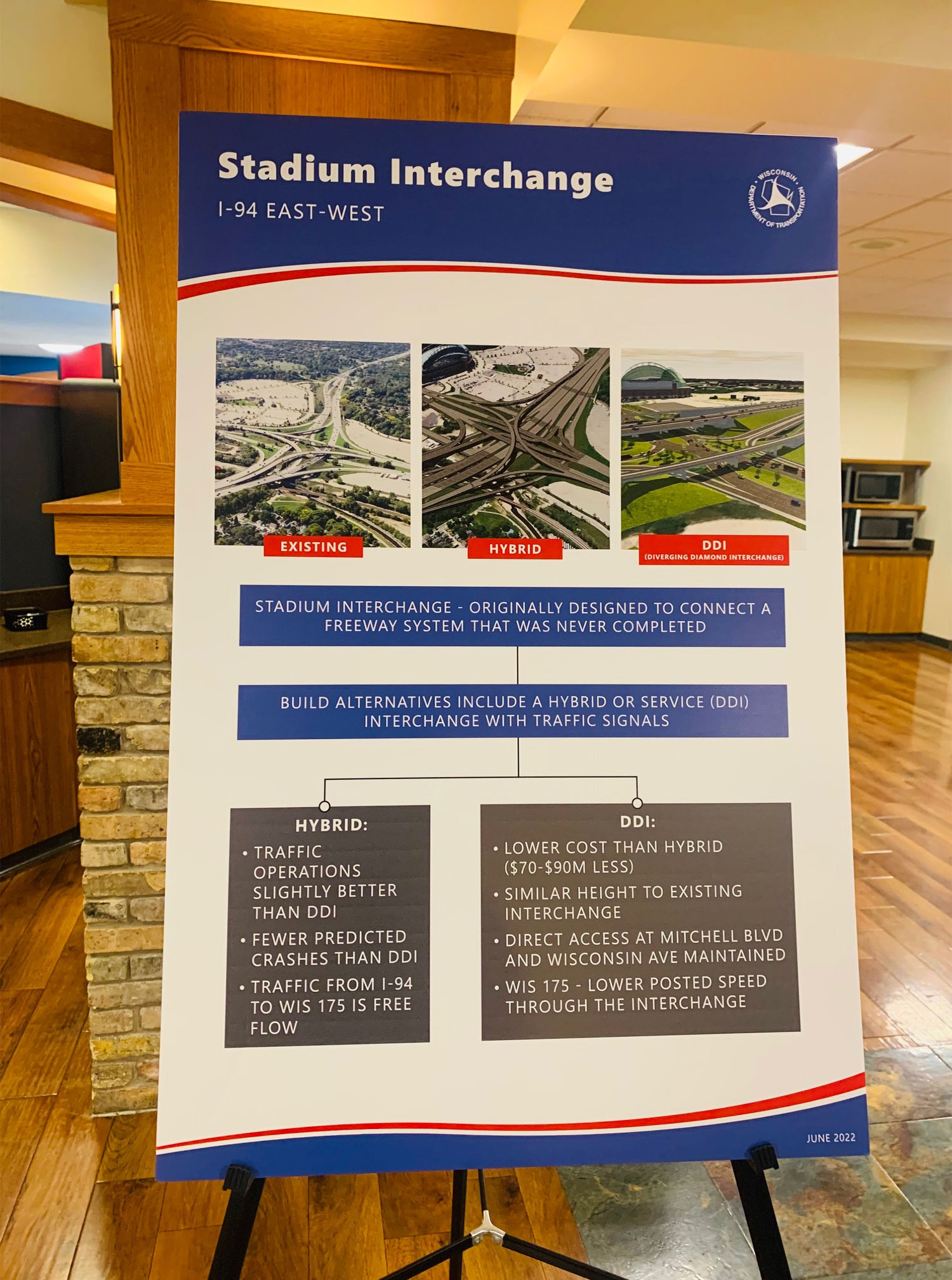 WisDOT’s plans for this corridor have undoubtedly improved over the course of this process. Hopefully, with continued feedback after this series of public involvement meetings, they’ll continue to improve. And yet, “Fix at Six” continues to be the best of the “buffet” of options out there right now. The corridor clearly needs to be fixed and modernized, but it does not need to be expanded, and the Stadium Interchange does not need to be larger, and we need more long-term investments in public transportation. This has all remained the case throughout this process.

The right way to do this is still sitting there. We can offer better options at a lower cost without overbuilding the freeway, and actually begin the work of desegregating the neighborhoods that highways have divided. The good news is they appear to be listening. Let’s keep making sure our voices are heard.