Sitting around our homes more than usual since March 2020 has given us a different if not deteriorating opinion of our personal items. For those of us in the fortunate position to have too much, these pandemic months have been marked by an overwhelming urge to get all this shit outta here, Carl.

Our default choices typically boil down to the easy or obvious: our garbage or Goodwill.

Goodwill does plenty of, well, good with the goods we donate every year. While the staggering volume of what they accept annually isn’t readily quantified, the Evergreen Goodwill in northwest Washington state —one of the charity’s 167 U.S. regions—took in 120 million pounds of goods in 2020. They can’t sell nearly all of that, as one shudders to imagine. That naturally cuts into Goodwill’s charitable profits, as they must dispose of the undesirable stuff in an environmentally friendly way.

By all means, keep donating to Goodwill and recycling responsibly. But Milwaukeeans have no shortage of opportunities to put unwanted items back into use, directly helping neighbors in the purging process while keeping stuff out of landfills and recycling centers.

Textiles going to a better place 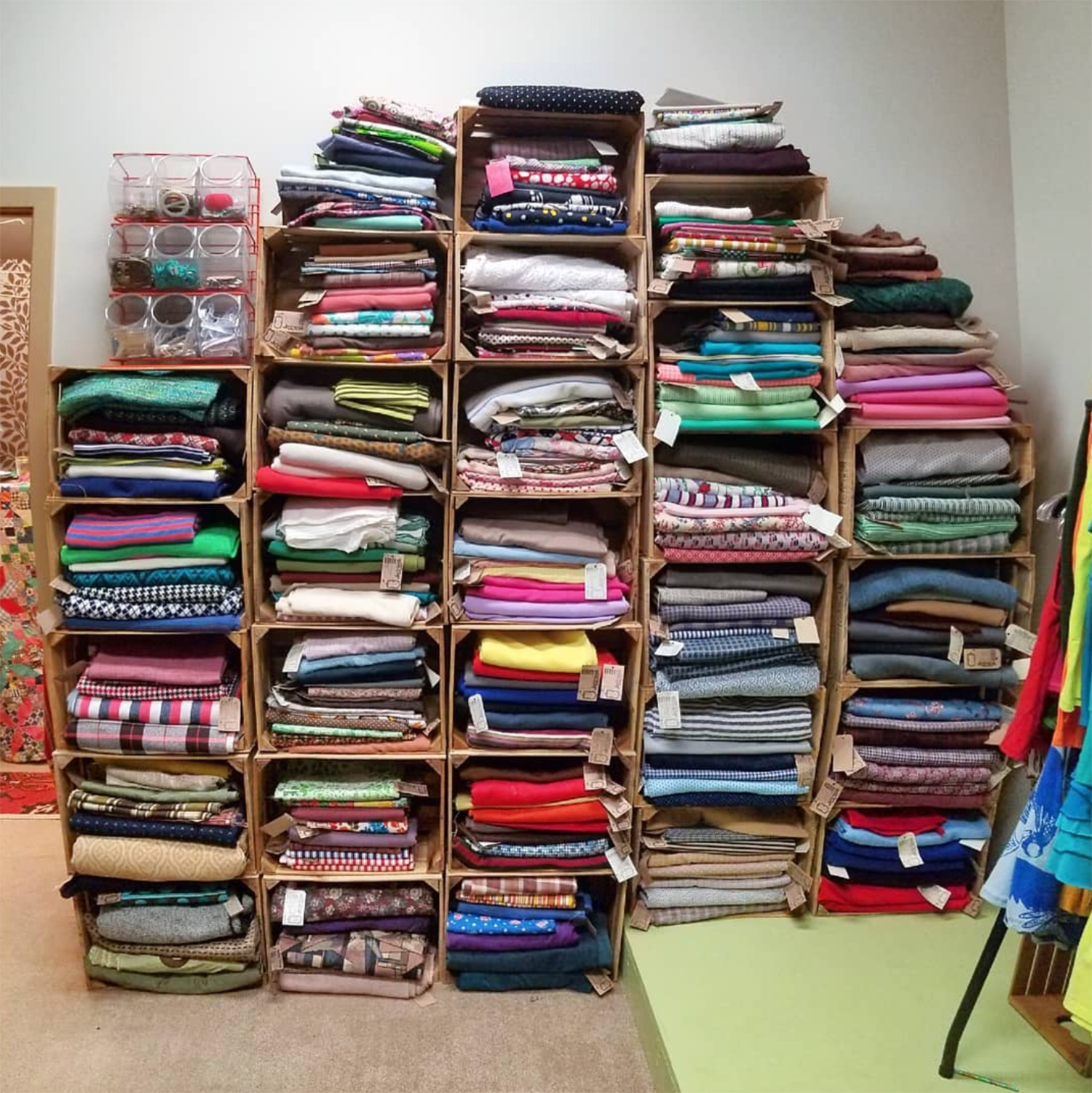 Vanessa Devaki Andrew’s Madam Chino clothing label has been a local leader in reusing textiles since 2003. She accepts donations for her in-house sewing school, where members of the general public learn how to reimagine items for new apparel. Vanessa herself repurposes unwanted fabrics to create MC clothing for resale in the shop, and donates what she can’t reuse to St. Vincent de Paul.

It’s her response to the unsustainable fast-fashion industry, where cheaply made clothing contributes to carbon emissions and water waste in its manufacturing process. According to Madam Chino’s website, 11 million tons of textiles end up in the garbage each year.

“I offer classes and kids’ camps where people can upcycle their own old bed sheets and towels into self-care items, since so much of that stuff is too used to donate,” Vanessa tells Milwaukee Record. “I also host workshops utilizing torn sailboat sails into beach wear, out-of-date upholstery samples into home goods, and community-sourced denim into artist wearables. These classes are seasonal, so I’m amping up to release a new run next year for the whole year.” She’ll list those online in mid-January.

Right now Madam Chino is only accepting donations of pants, especially denim—Vanessa received a garage-full of a school district’s T-shirts on the heels of its rebrand. Vanessa has plans to create a revolving textile mural at her West Allis headquarters, in collaboration with community members. And in the spirit of teach-a-person-to-fish, she offers classes where students learn to repair clothing rather than toss it.

Donate what you don’t want 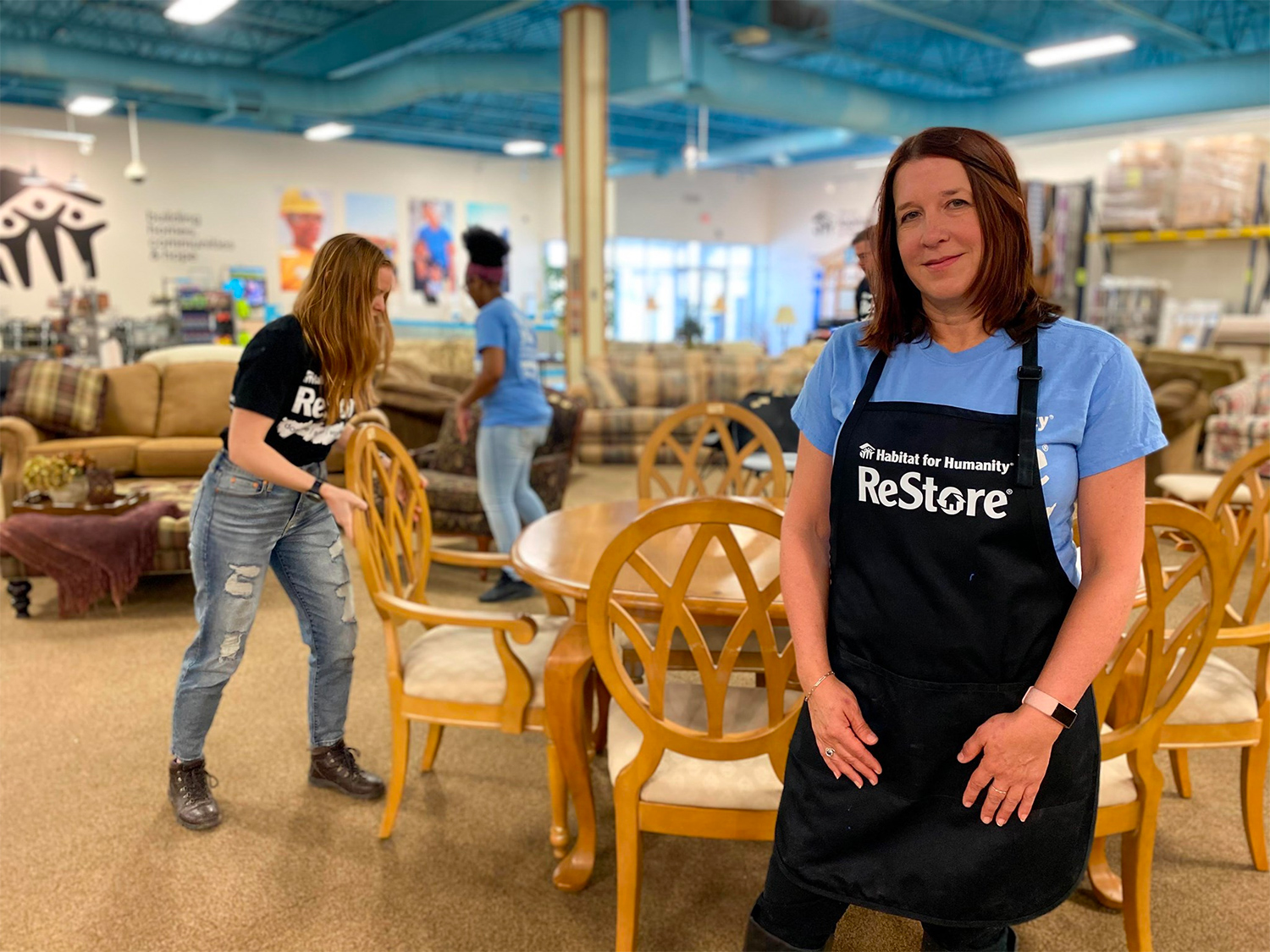 Animal shelters take old textiles for small animal beds, along with other supplies. Clothing closets in the county provide items for those in need. Hospitals, shelters, libraries and other organizations accept gently used books and toys. With her deep roots in Milwaukee’s green scene, Vanessa offers further suggestions for readers to unburden themselves of unwanted household items.

• Church organizations: “Most church orgs are local and non-profit, like St. Vincent de Paul, St. Charles, Salvation Army, Father Gene’s Help Center, and Purple Heart. Most of that money stays in the community and the people who run them aren’t corporate millionaires.”

• Buy/sell/trade/freecycle: “Bandit MKE facilitates helpful buy/sell/trade programs for people to get something for their used items. Divine Consign is another scaled-up organization helping people find new homes for their items and getting some coin for it. In that same vein locally, there is of course the Neighborhood app, and other freecycle and buy-nothing groups.”

• Other options: “Arts @ Large and Cloud9 take art supplies, and the ABK Weaving Center accepts fabrics and yarn. CTC Supplies in Riverwest buys clothing and invites people to host their own drives, paying them for bags of usable clothing they collect through its Milwaukee Textile Recycling division. Wastecap takes house and architectural pieces while doing amazing things for corporate waste audits. Milwaukee ReStores are non-profit home improvement stores and donation centers run by Habitat for Humanity.”

Know how to dispose

The City of Milwaukee, Wisconsin DNR and federal EPA have plenty of ideas for where to discard anything that wouldn’t be a welcome donation—think broken electronics, furniture, appliances, batteries, and whatever’s in that corner of the attic you haven’t looked at in a decade.

• E-cycling: According to the DNR, “many electronics can no longer be put in the trash in Wisconsin and must be reused, recycled or managed as hazardous waste. Its page for recycling electronics in the state lists collection sites and resources for how to prepare your device for recycling. The city’s Recycle For Good site lays out the facts for what can’t go in landfills and collection sites, including the wonderful Keep Greater Milwaukee Beautiful. The EPA has a fairly comprehensive list as well.

• Bulky items: Listen, nobody wants your old mattresses and tires. But if they do, Milwaukee Record implores you to make sure they’re from the Sanitation Services. Furniture unfortunately ends up in the landfill. You can recycle a surprising amount, though, including concrete, appliances, and car batteries. So see what they accept for drop-off instead of leaving it on the curb or abandoning it down by the river.

• Everything else: The City of Milwaukee has clearly seen it all, as evidenced by its lengthy list of what to do with everything else you might have lying around, including hoses, small engines, and—ah yes—dead animals. If you’re not sure what to do with those old hangers, foam, CDs, or Christmas lights, you can find guidance in the Recycling Directory.