But seriously: For the past week, a group of Galaga-adverse neighbors from across the nearby Milwaukee River have been protesting Up-Down, hoisting signs that say things like “UP Down Too Noisy” and “UP Down Bar Noisy Neighbor.” Their beef? Well, noise, of course, but specifically noise from Up-Down’s outdoor patio.

“Sound from Up-Down has been wafting across the river since August 25,” says one of the protestors, Jane Lewis. “Thursday, Friday, Saturday nights, between 10 and 2. The noise really gets cooking at about 1 a.m. It comes in our windows. We get woken up intermittently from about midnight to 2 on the weekends.” 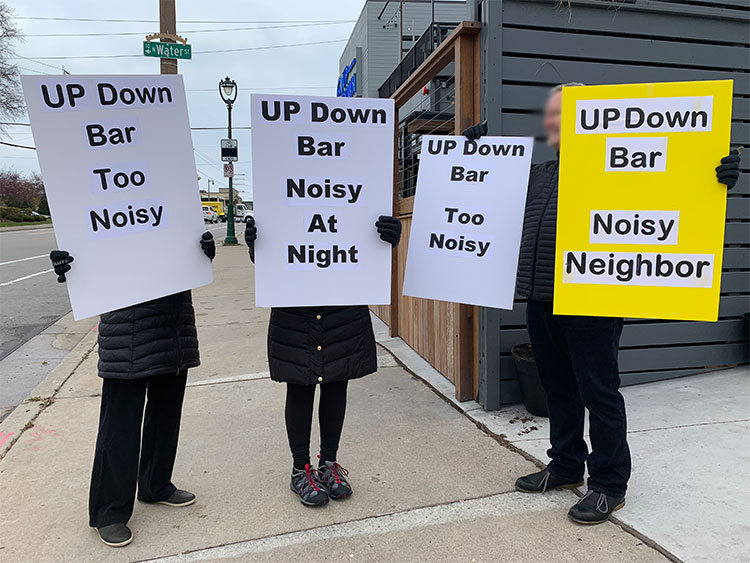 Lewis stresses that she and her fellow protestors are “all about having fun,” and points to another fun-having business as an example.

“Please be a considerate neighbor, like Lakefront Brewery,” Lewis says. “They’re half a block away and we never hear them. It’s so great. Why can’t [Up-Down] be like them? Put that in there.”

In response to the protest, Up-Down has released this statement:

Up-Down is aware of the noise complaints made from some of our neighbors in Brewers Hill. Shortly after opening we began bringing in all outdoor games and ceased playing outdoor music after 10pm to mitigate the noise. We have hired an acoustic engineer to study the volume levels and advise us on possible methods to further decrease the potential for conversations on our patios to carry across the river. We understand that there are still complaints about the crowd chatter, and we have been proactively and voluntarily addressing this, as well as communicating with our neighbors to discuss the steps we are taking.

“We’re really enthusiastic about sleeping between 10 and 2,” Lewis adds. “A lot of these people are awake and are having fun, and I think that’s great, but I want them to take it inside.”

In other news, Up-Down’s Killer Queen league kicks off next Tuesday, and we need to figure that game out, quick.