But what exactly does that mean for Milwaukee? No, it does not mean that marijuana has been legalized or even decriminalized. Ortiz-Velez, Senator Lena Taylor, Eric Marsch of WI-Can, Drea Rodriguez, and community organizer Julio Gumeta aim to help answer some of these questions. This group is part of Legalize MKE, a new grassroots community organization.

“We are looking to make sure everyone is heard and that we clearly address issues that haven’t been too clear up until this point,” Taylor says.

There will be a live Zoom event on Tuesday, May 18, at 6:30 p.m. Anyone can attend and have their fears assuaged and their concerns addressed. The panel hosted by the group aims to address concerns directly, in a way that listening sessions or town halls held by the government sometimes do not. 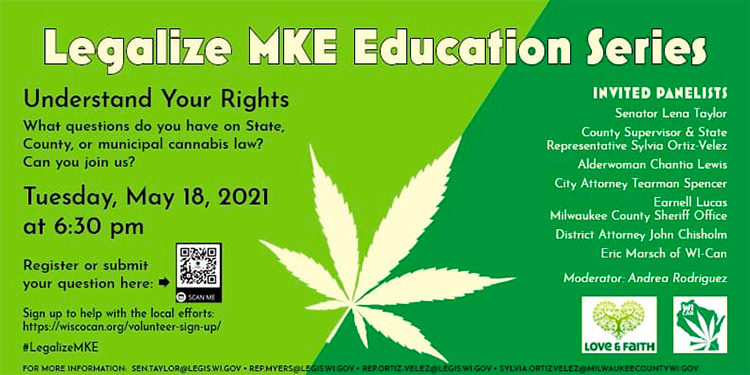 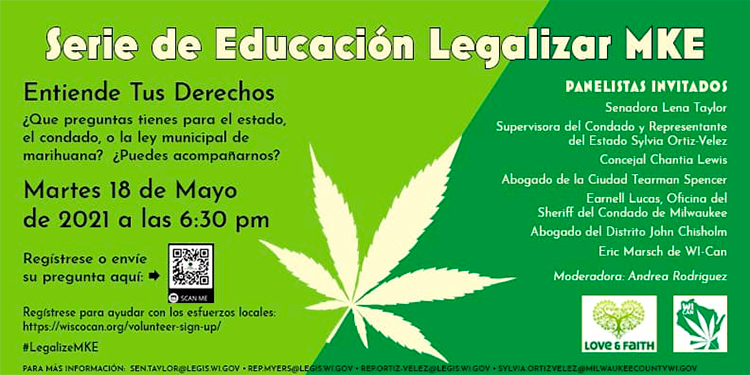 The efforts to help everyone understand their rights do not start or stop with the panel session, however. “We have plans to canvas neighborhoods with flyers and let them know exactly what they can and cannot do,” Gumeta says.

The group plans to canvas and door-hang information in neighborhoods that have been the most affected by disproportionate marijuana offenses. State, county, and city officials, as well as local law enforcement, Milwaukee County District Attorney John Chisholm, and Milwaukee City Attorney Tearman Spencer have been invited to appear and answer community questions about the current and new ordinances that impact residents.

“This pandemic has taught us many things, especially our understanding of trauma and economic instability,” Rodriguez says. “As we work toward a new normal, we also have enough data to support that drinking and marijuana use are on the rise, especially as our state becomes surrounded by legalized recreational marijuana in Minnesota, Illinois, Michigan, and Canada. As a community organizer, I’m often helping residents understand changes in our laws. Most of the time community leaders tell residents what’s not allowed, but we don’t all empower residents with a clear understanding of their rights. This education series is an opportunity to have criminal justice leaders and elected officials publicly state how they interpret this law and to directly answer the questions of residents.

“While this education series may not solve the issue with inequity and our criminal justice system,” he adds, “we hope this panel can send a message of the transparency we want modeled on all ordinance changes.”

Questions can be submitted via email once the event goes public.