On the evening of Wednesday, September 7, in the year of our Lord 2016, nearly 100 grown adults and several weeping children gathered in the Marcia Coles Community Room located below Bartolotta’s Lake Park Bistro to discuss—and sometimes scream and wail to the heavens about—Pokemon Go. The meeting was meant to address the many issues Lake Park has faced since becoming one of the most popular and concentrated Pokemon Go destinations in the country: increased litter, damaged grounds, lack of bathrooms, parking problems, concerned neighbors, etc. Instead, it was alternately boring and interminable, occasionally livid and contentious, gloriously absurd and a stupid waste of everyone’s time. No PokeCoins were awarded, and may God have mercy on our souls.

Hoo boy. Where do you begin with this thing? Maybe with the fact that the 7 p.m. meeting was something of an add-on to a regularly scheduled Historic Water Tower Neighborhood Association meeting, and that all Pokemon talk was set to end at exactly 8:30 p.m.? Maybe with the fact that nearly 60 minutes of the meeting’s 90 minutes were given over to introductions and comments from parks officials, aldermen, county and city representatives, police officers, folks from the sheriff’s department, and at least one guy doing his best “How do you do, fellow kids?” routine? Maybe with the fact that despite the panel’s assertion that waiting this thing out until it dies off in winter was “not an answer,” this thing will totally die off in winter? 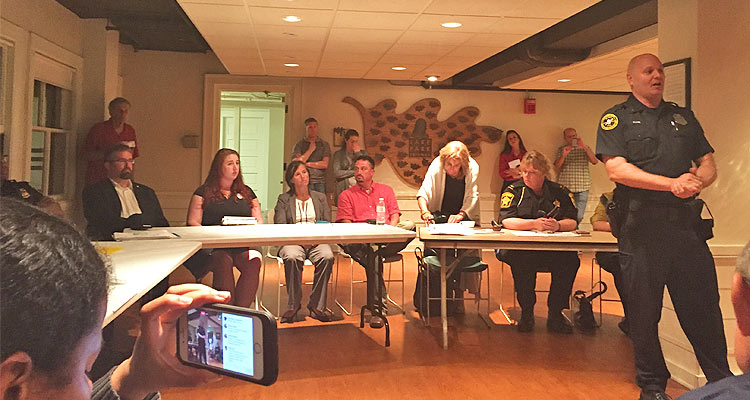 Wasserman did most of the heavy lifting by explaining the panel’s concerns. Trash, parking issues, lack of bathrooms, trampled landscapes, and neighbors threatened with violence were just a few of the problems discussed. Seeming a bit exasperated with the whole thing, Wasserman repeatedly stressed that while it was indeed wonderful to see so many people enjoying the park, the area was in the process of being “loved to death.” “The current situation is untenable,” Wasserman said, before tossing out the idea of perhaps relocating or rotating the Pokemon hotspots to other areas of the park, or to other county parks altogether. Veterans Park was suggested as a more suitable location for the Poke-madness, with more space, more parking, more bathrooms, and fewer neighbors.

Dargle echoed Wasserman’s concerns, noting that his only goal in the Poke-dustup was to keep the park “safe, clean, and accessible” for all. He explained how he had added more garbage cans and cigarette receptacles to the park, and how he had tapped inmates from the House of Correction to pick up trash in the early mornings. He also stressed that he had never asked the developer of Pokemon Go, Niantic, Inc., to remove the game from the park entirely; instead, he had simply asked for the game’s hours to end at 8 p.m., ahead of the park’s 10 p.m. closing time.

“A lot of people think, ‘Hey what’s the big deal?,'” Ald. Kovac pleaded. “I think it is a big deal.” Kovac went on to talk about the various options the county was exploring (“One option, obviously, is to sue Niantic. Another option is to ask Niantic nicely,”) and finding a solution where “everybody wins.” Kovac mentioned that since Lake Park’s insane Poke-popularity was based on something of a feedback loop—more people equals more Pokemon, more Pokemon equals more people, etc.—perhaps parks officials and players could team up to transfer some of that popularity elsewhere. Again, Veterans Park was brought up as an ideal spot.

And on and on it went, with panel member after panel member noting that the vast majority of Pokemon players were peaceful and respectful, and that the positive aspects of the game’s Lake Park popularity—more people enjoying the park, more people getting outside, etc.—were things to be celebrated. But all also stressed that the park was “overwhelmed,” and that the problems brought on by the game were “real problems.”

Then came the Q&A. Oh dear, the Q&A. It was a Q&A that Peltz introduced with the kind of wariness and caution usually reserved for scenes in movies where someone walks someone else through a bomb diffusion over the phone. Peltz asked for calm. She asked for respect. She asked for concise questions. She asked for questions, period. She got none of it.

Instead, she got angry, livid, and surprisingly emotional declarations of Poke-love. Here’s audio from the first question, which was one of the more subdued:

And so it went, with various Pokemon players continually reasserting their love for the game, a woman who seemed more interested in berating the panel than addressing its concerns, a musician/Pokemon player who mentioned he had been written up by the Journal Sentinel (“Check my credentials!”), and a middle-aged white woman who suggested using the Black Panthers as a freelance Lake Park security team, much to the off-the-charts bafflement of absolutely everyone.

Things ended on a contentious note when Peltz cut things off at 8:30 p.m. sharp, despite the fact that a young boy in a top hat and a Ghostbusters T-shirt still had something to say:

“I…want you to know…are you ready for the national headlines about you guys trying to take…CHILDREN and FAMILIES out of a PARK…that is FULL OF PEOPLE who are LOVING THIS GAME…and having fun and meeting new people who they will be…friends with for maybe even YEARS! And you’re trying to kick them out and make it so they’re not having fun! The people who…you LIVE by this park…you CHOSE to buy houses by this park!”

Finally, a Pokemon player took it upon himself to speak for the entire Pokemon-playing community and ask for some calm:

On the other hand, it’s clear Pokemon players are feeling unfairly singled out and targeted for simply enjoying a game. Do they have the right to enjoy the park like anyone else? Of course. Are the vast majority of them bringing a positive energy to a park that could stand to use a little pizzazz? Yes. Will some trampled grass and litter be the death of Lake Park? Of course not. Will a 90-minute meeting—a meeting, remember, attended by nearly 100 grown adults and several weeping children—dedicated to the supposed scourge of a Pokemon game look absolutely ridiculous in, oh, say, three months? Hey! Nintendo is doing a Mario runner for iPhone!