Oh great, another opinion article about the fucking Milwaukee flag! Well, not exactly. At this point, I’m sure whatever thoughts and feelings I could write about the latest (and seemingly most organized) effort to change Milwaukee’s “eccentric” city flag that’s been flying since 1954 have been written already, and immediately disregarded by some of you. People seem to know how they feel and they aren’t going to change their mind. I could try to repeat the points and sentiments about the current flag’s significance that Evan Rytlewski made last month in his fantastic Shepherd Express column.

I could talk about how I’ve proudly displayed a Milwaukee flag in my home long before this latest campaign took hold, how I love its imperfections and its respectful nod to the industrial past that helped put the city on the map in the first place. I could say how this effort reeks of Milwaukee’s inferiority complex, how it’s a desperate (and ultimately futile) effort to keep up with Chicago, and then I could say unnecessarily mean things about the work of the actually quite talented finalists whose designs—in all their “Principles Of Good Flag Design” glory—dare to go against the piece of cloth that I prefer. Instead of doing any of that, I’d like to show you how I feel about Milwaukee’s flag.

With People’s Flag Of Milwaukee set to unveil its choice for the design they feel should represent our city tomorrow (fittingly, on Flag Day), I wanted to declare my lifelong affiliation to Milwaukee’s current flag design by getting it tattooed on my body.

On June 1, I went to Shogun Tattoo in Bay View and sat in a chair across from Meredith Hall, who gussied up my right forearm with the principal-bucking and highly debated symbol of the city I love. I asked her for one minor modification: to swap out the Native American that, justifiably, has upset some for a Milwaukee Record logo. Hey, I never said the flag was perfect as-is! After about three hours and minimal discomfort, I was left with my first tattoo, zero regrets, and a timeless emblem of what Milwaukee means to me.

In all likelihood, the People’s Flag effort won’t result in a new official flag. Instead, some people will fly the “M-star,” others will fly the current flag, and most will go about their lives completely oblivious to the fact Milwaukee even has a flag. Who knows? Maybe all the hubbub will work and the flag will actually be officially changed. Anything is possible. No matter how this whole flag debacle pans out, I’ll always be able to look at my right arm and see my true colors. And those colors won’t run. They literally can’t. 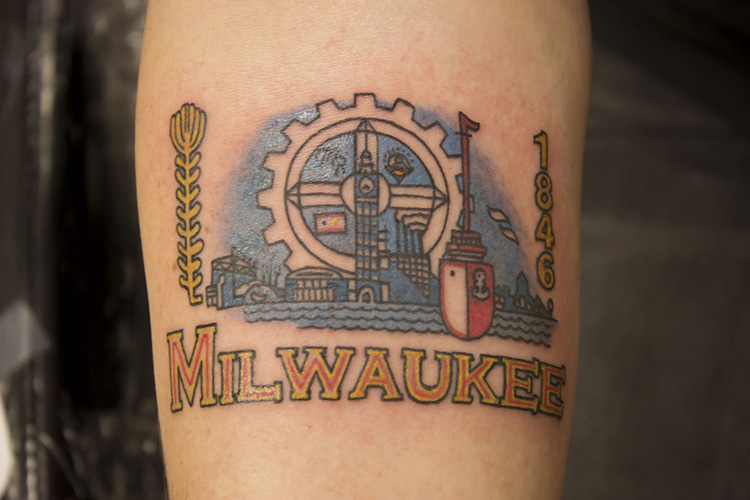