This August will mark the 10-year anniversary of the official unveiling of the Bronze Fonz. Yes, the once-controversial piece of strangely diminutive pop art has been grinning its soulless grin along the Milwaukee RiverWalk for a full decade. It’s been the subject of millions of photographs and videos. It’s been immortalized in song. It’s loved. It’s hated. It’s time to melt the damn thing down.

“IT’S TIME TO PUT MILWAUKEE ON THE MAP!” adds a wonderfully cheeky (and obviously fake, so everyone calm down) GoFundMe campaign called “Melt the Bronze Fonz.” Perfectly satirizing that infamously dumb/cynical/scam-y “Love MKE. Blow Up a Car” Kickstarter from 2012, “Melt the Bronze Fonz” insists that the best way Milwaukee can keep up with “objectively better cities” (Chicago, Minneapolis, NYC, Gary) is by getting rid of the thing those cities don’t have—namely, an $85,000 statue of a ’70s sitcom character. Makes sense!

Let’s take a quick look at the Bronze Fonz. Is it cute? Sure. Does it allow tourists the luxury of an original and special photo-op? It sure does. Are the teeth perfectly rendered? That’s the double tooth, Ruth.

But hold on a minute. Let’s look at objectively better citites (Chicago, Minneapolis, NYC, Gary). Notice anything about them? THEY DON’T HAVE A BRONZE FONZ.

IT’S TIME THAT MILWAUKEE ALSO DOESN’T HAVE A BRONZE FONZ!

I believe by melting our beloved sculpture of Henry Winkler, we’ll be putting ourselves in the favorable position of finally being noticed by the rest of the world.

The rest of the fundraiser’s write-up is equally hilarious and spot-on, and worth the read. (There’s also a quick dig at that Light the Hoan Bridge thing.) “Love your city. Make your mark. Let’s turn Fonzi into a nugget of fool’s gold,” it concludes. 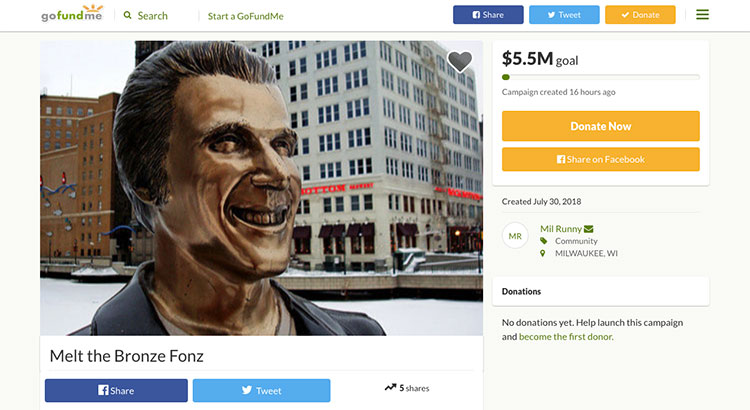