UPDATE: In response to today’s vote, a Bird spokesperson writes: “The City of Milwaukee passed an ordinance today giving local law enforcement authority to impound e-scooters being operated as ‘motor vehicles’ based on an interpretation of state law. However, the Federal Government motor vehicle safety regulator NHTSA has affirmatively stated that scooters like those offered by Bird ‘are not “motor vehicles.”‘ We look forward to continuing our work with the city of Milwaukee and the State of Wisconsin to resolve this matter and provide the people of Wisconsin our clean energy solution for short distance trips.”

In a relatively brief, matter-of-fact vote Tuesday morning, the Milwaukee Common Council voted 12-2 to kinda-sorta ban Bird scooters. Under the approved ordinance, the popular scooters will remain illegal in Milwaukee and can be impounded, but riders will not be fined. An 11th-hour substitute resolution by Ald. Bob Bauman deleted any language specifically prohibiting the scooters, per se, though the alderman reiterated that the vehicles are still illegal to operate on city streets and sidewalks, and that only the state can make them legal. The changes came at the request of Mayor Tom Barrett.

The measure awaits final approval from Barrett. The mayor is expected to sign the legislation in the next four to five days. After that, the city could get to impoundin’.

The immediate impact of Tuesday’s vote is unclear, though it’s apparent that the City of Milwaukee is leaving the Bird door open if the State of Wisconsin eventually legalizes the things. The state isn’t expected to take up the Bird dilemma until 2019.

About a dozen protesters showed up at City Hall Tuesday morning to show their support for the $2 billion California-based company that had the stones to plead for help last week. “The Milwaukee Common Council is considering banning Bird from the entire city,” the plea read. “Taking away this new, innovative transportation option will hurt Riders. Whether you rely on Bird to help you get around town, to get to work, or to explore local businesses in your neighborhood, let’s tell the Council that we want them to say, ‘NO,’ to the proposed ban.” Sadly, there is now no way to get around town, get to work, or explore local businesses in your neighborhood. 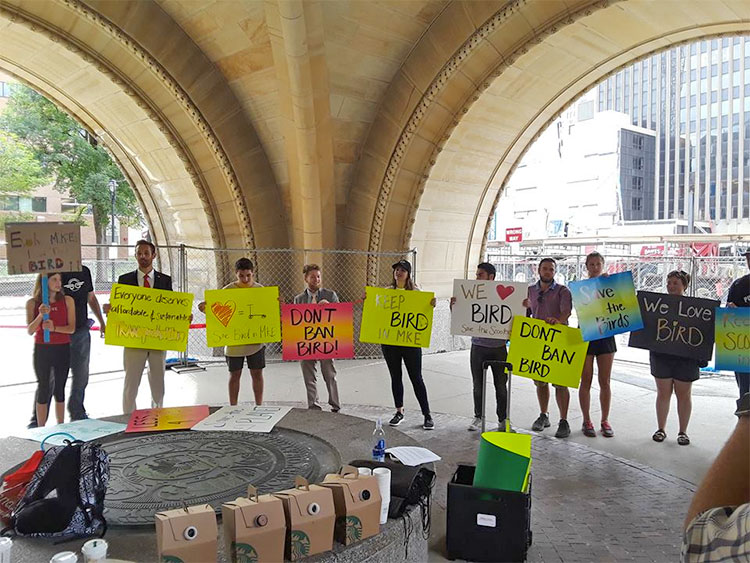 Similar to its tech-bro “disruption” tactics in other cities, Bird just went ahead and deposited a ton of its scooters in Milwaukee on June 27. Deputy City Attorney Adam Stephens subsequently issued a cease-and-desist letter and sued the scooter company. That lawsuit has been moved to federal court and is still pending.

Stephens and other city officials have maintained that Bird and Bird-like scooters are illegal under state law, and that the City of Milwaukee is unable to make them legal. Bird has not shared that opinion, stating: “Motorized scooters, like Bird, are neither defined nor prohibited by Wisconsin or Milwaukee law. We ask that the city of Milwaukee seek clarification from the state of Wisconsin that Bird scooters are exempt from registration, like bicycles and motor bicycles.”