• A sparkling new $34.3 million academic facility dedicated to the study of artificial intelligence, as well as “deep learning, cyber security, robotics, cloud computing, and other next-generation technologies,” will be constructed in the middle of the Milwaukee School of Engineering’s downtown campus. The new four-story, 64,000-square-feet facility (complete with a 250-seat auditorium) will be funded by a gift from 1990 MSOE grad Dwight Diercks and his wife, Dian. It will be known as the Dwight and Dian Diercks Computational Science Hall. Diercks is currently a senior vice president at NVIDIA. This is totally the backstory to Ex Machina. [Milwaukee Journal Sentinel] 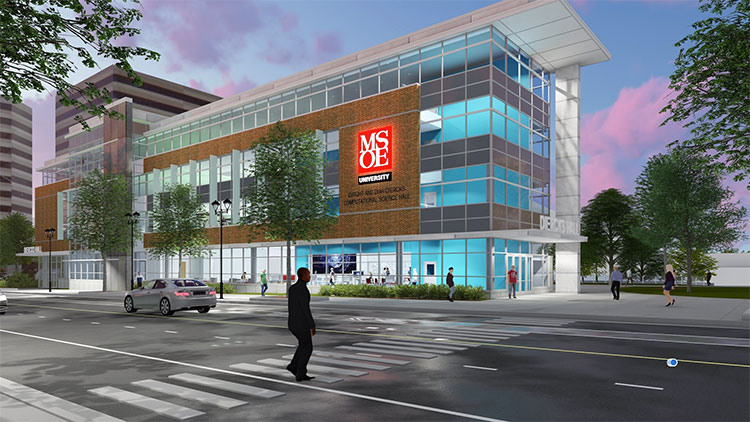 • The Milwaukee Bucks (along with Royal Capital Group) have begun construction of a 107-unit mixed-use apartment building located along N. 6th St., immediately west of a new Bucks parking structure. The building will be known as “Park 7 Lofts,” and is expected to be completed in 2018. [Urban Milwaukee]

• The 123,000-square-foot Boston Store store building on the west end of the Shops of Grand Avenue will convert more than half its existing retail space into office space. The store will axe its children’s, home, and furniture departments, and will add “expanded men’s and women’s apparel, a strong seasonal gift assortment and an FAO Schwarz toy department, which will be launched at the end of October.” [Milwaukee Journal Sentinel]

• A development team is planning a three-phase project in Sherman Park, at the northeast corner of W. Center St. and N. 33rd St. Phase one of the $60 million project will include “55 units and affordable office space for up to 12 businesses and non-profits,” as well as a small skate park and putting green. Rayhainio Boynes —a.k.a. Milwaukee musician Ray Nitti—is part of the development team:

Boynes told the Common Council’s Zoning, Neighborhoods & Development Committee that his team is also working with TRUE Skool and Urban Underground to move into the project’s office space. He stated that “we want to create a space where non-profits that typically have the same goals can have a space to collaborate in.” [Urban Milwaukee]

• A second, seven-story tower may be coming to the office at 875 East Wisconsin Avenue. [Milwaukee Business Journal]

• The Milwaukee Common Council’s Zoning, Neighborhoods & Development Committee unanimously approved a new four-story, mixed-use public library located at 7717 W. Good Hope Rd. The building will include “65 apartments and a 17,000 square-foot library. All but nine of the apartments will be set aside at reduced rates for those making less than 60 percent of the area’s median income.” The new Good Hope Library will replace the nearby Mill Road Library. [Urban Milwaukee]