Back in 2003 I was taking a stab at underground comic production with an anthology of mostly local artists titled Riverwurst Comics, which ran six issues from 2003-2006. As I got started, I had the thrill of discovering the legacy of Kitchen Sink Press, an underground comic (or “comix”) publisher that had started in Milwaukee in 1969. San Francisco was the epicenter of this genre, which often reveled in sex, drugs, politics, and other adult situations, but I was surprised to see that Milwaukee was a close contender. I found that Kitchen Sink Press’s founder and namesake, Denis Kitchen, had a website. I emailed him asking if I could interview him for a feature in Riverwurst. He agreed and let me reprint some of his delightful and surreal art.

Kitchen Sink Press established itself on the East Side where Kitchen and friends like fellow cartoonists Jim Mitchell and Don Glassford had to schlep boxes of comics up and down two flights of stairs to Kitchen’s apartment at the corner of Frederick and Webster streets. They soon found an office space to operate out of on North Avenue in a building where the McDonald’s is today. In my 2003 interview, Kitchen recalled how the hardworking cartoonists were returning to the office after a midnight break at Oriental Drugs when:

“I must have been fumbling with the lock when two of Milwaukee’s finest descended and assumed that three hippies were breaking into the place. I had to show them my business card with the address. They seemed genuinely astonished that longhairs actually held jobs and worked long hours.”

The first title published by Kitchen was his own Mom’s Homemade Comics. Other titles over the next decade included Death Rattle, Snarf, Bizarre Sex, and Robert Crumb’s Home Grown Funnies. (The title was a best seller; R. Crumb visited Milwaukee regularly and almost moved to Wisconsin before going with France instead). Kitchen Sink was also an early publisher of undergrounds edited by women and LGBT creators.

Kitchen branched off to become a hippie entrepreneur—he co-founded The Bugle, a weekly alternative newspaper that featured a comic page and cover art from Milwaukee and Chicago artists, and he was a co-owner of Strickly Uppa Crust, a head shop on Brady Street that sold posters, paraphernalia, and, of course, comic books (“Kareem Abdul-Jabbar was a regular customer,” Kitchen told me.)

In 1973, Kitchen joined the “back-to-land” movement and bought a farm in Princeton, about 100 miles northwest from Milwaukee, where he built a warehouse and converted a barn into an office complex. Here, he says, “free from the distractions of the city,” he was able to focus on being productive and developed Kitchen Sink Press into not only a publisher of raunchy underground comic books, but reprints of classic comic strips in book collections, as well as new graphic novels. In 1993, Kitchen wanted a change and uprooted and moved to Northampton, Massachusetts to merge with Tundra Publishing. Kitchen Sink Press dissolved in 1999.

There are many other cool things about Kitchen: he was a socialist candidate for Lieutenant Governor in 1970; and he founded the Comic Book Legal Defence Fund in 1986, to help artists charged with obscenity. (One of Kitchen Sink’s titles, Omaha The Cat Dancer, “was part of a bust in a suburban Chicago comic’s shop,” Kitchen says.) More recently he collaborated with Dark Horse Comics to create a Kitchen Sink Books imprint in 2013.

But one of the most impressive things about Kitchen is his collection of comic art, which includes work from masters of the craft spanning the last century. Part of Kitchen’s collection will be on display at the Museum of Wisconsin Art in West Bend in a exhibit titled “Wisconsin Funnies: Fifty Years of Comics” which opens August 8 and features nearly 200 works by 25 artists who have been published by Kitchen Sink, including Will Eisner, Harvey Kurtzman, Robert Crumb, Trina Robbins, and notable Wisconsinite cartoonists like award-winning Madison artist Lynda Barry, Kitchen Sink house artist Peter Poplaski, and Madison superhero artist Steve Rude.

A satellite display at the Saint Kate Art Hotel opens the same day and focuses on the original Kitchen Sink crew of Milwaukee and Chicago artists, including Jim Mitchell, Jay Lynch, Skip Williamson, and Kitchen himself. MOWA’s gift shop will also have a selection of books, posters, coffee mugs, buttons, and puzzles featuring comix art and even some old issues of the Bugle for sale—worth it for the art and vintage ads alone.

Tie-in events include a virtual artist talk with Denis Kitchen on August 13 and other virtual panels and discussions throughout the month. More information at MOWA’s website. 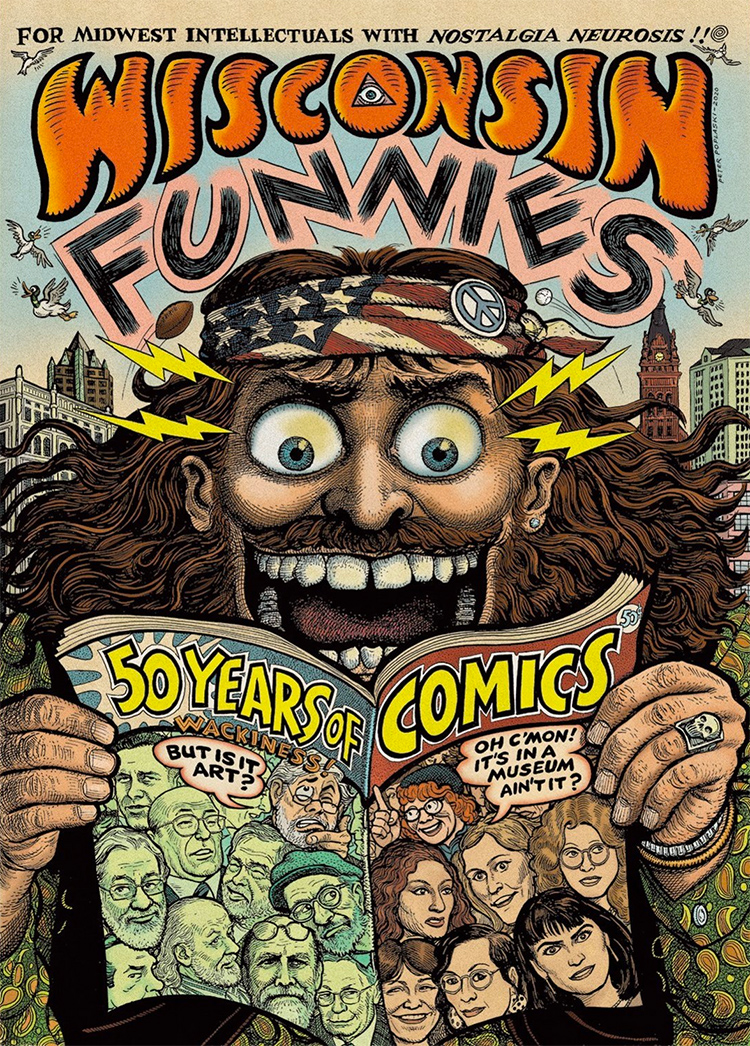