If you haven’t already ordered, read, and ruminated on American Madness by Milwaukee author Tea Krulos, do so RIGHT NOW. The book (full title: American Madness: The Story Of The Phantom Patriot And How Conspiracy Theories Hijacked American Consciousness) tells the fascinating and ultimately tragic tale of one Richard McCaslin, a man whose evil-thwarting alter ego (The Phantom Patriot) is only the beginning of his conspiracy-addled story. The Bohemian Grove, Alex Jones, crisis actors, QAnon, Donald Trump, and much more figure into a meticulously reported book that began with a series of letters and emails a decade ago, but couldn’t be more relevant for today.

Want to join Krulos (a Milwaukee Record contributor) and Milwaukee Record’s Matt Wild for a virtual chat about the book? Want to ask Krulos some questions about how American Madness is something of a culmination of his writing career? (Krulos’ previous books include Heroes In The Night, Monster Hunters, and Apocalypse Any Day Now.) Then call in to special Zoom meeting (courtesy of publisher Feral House) on Thursday, September 10 at 7 p.m. Click HERE for the link and password.

And again: This is a fantastic, must-read book, and one that you’ll find impossible to put down. Order it from Milwaukee-based bookseller Lion’s Tooth HERE.

Author Tea Krulos tells the story of one man, Richard McCaslin, whose fractured thinking made him the ideal consumer of even the most arcane of conspiracy theories. Acting on the daily rants of Alex Jones and his ilk, McCaslin takes matters into his own hands to stop the unseen powers behind the world’s disasters who congregate at conspiracy world’s Mecca—The Bohemian Grove. It all goes wrong with terrible consequences for the man who styled himself—The Phantom Patriot.

McCaslin is not alone, as conspiracy-driven political action has bubbled its way up from the margins of society to the White House. It’s no longer a lone deranged kook convinced of getting secret messages from a cereal box, now its slick videos and well-funded outrage campaigns ready to peddle the latest innuendos and lies in hopes of harnessing the chaos for political gain. What is the long term effect on people who believe these barely believable stories? Who benefits, and who pays the price? Krulos investigates and explains the power of conspiracy and the resulting shared madness on the American psyche. 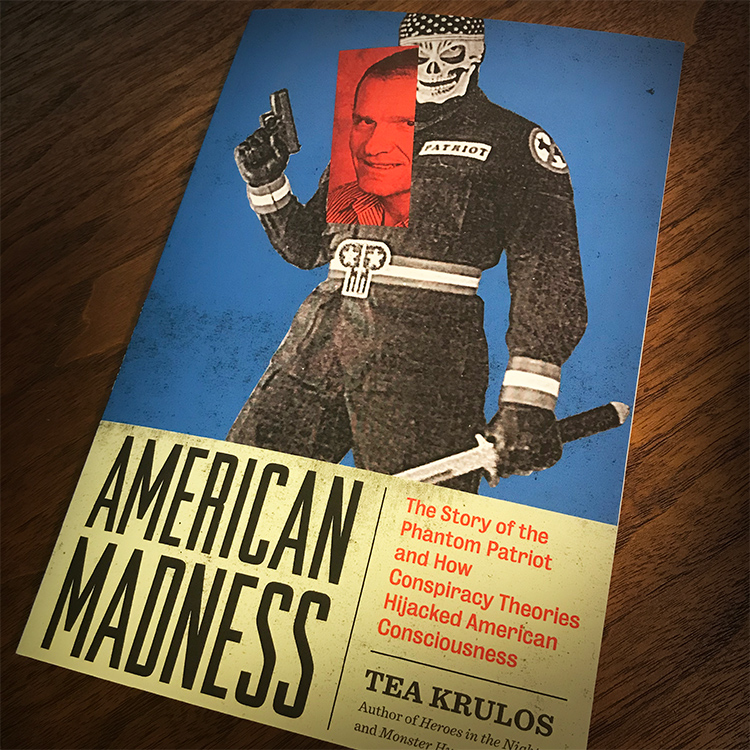