With 11 seasons and roughly 100 episodes of their beloved cult television program, five feature films and specials, and a heft of other material released on their Swearnet comedy network to their credit, the Trailer Park Boys are pretty much untouchable. The irreverent mobile home inhabitants have fashioned a cottage industry from their self-starting approach, the banishment of any and all gatekeepers, and an ardent refusal to play by anyone’s rules.

That combination, along with the inimitable hi-jinks the nasty Nova Scotians have captured on film through the years, have brought a massive and passionate audience to Sunnyvale Park. Similarly, Trailer Park Boys can get thousands of fans to turn up when the Canadian comedians take their weed-infused, piss-soaked, and burger-fueled act on the road. That was the case Friday, when a rowdy crowd packed Milwaukee’s Riverside Theater to take in—and, at times, take part in—a self-described “fucked up evening” of mixed-media debauchery, gut-busting games, and a singalong led by none other than Bubbles.

Entering to a deafening ovation, the unholy TPB trinity of John Paul Tremblay (heretofore to be referred to as Julian), Robb Wells (Ricky), and Mike Smith (Bubbles) quickly won the sold out theater over with the announcement they’d just finished filming the show’s 12th season. While that risked toppling the fourth wall, they preserved their characters’ conceit with an anecdote about Ricky pulling out a gun at a restaurant over a dispute about doughnut seeds—aka Cheerios—that morning before he allegedly relieved himself on the Bronze Fonz. As Ricky justified his actions amid the various cries of “Fuck you, Ricky!” from all corners of the venue, the silhouettes of Patrick Roach (Randy) and John Dunsworth (Mr. Lahey) appeared on the stage-mounted projector, eating fries and chugging liquor, respectively, while dancing to Wham!’s “Wake Me Up Before You Go-Go.” The power couple soon took the stage and, in doing so, introduced the show’s overriding and fairly familiar theme: Ricky and Randy fighting.

The show-long feud started with video segments (a frequently-relied-upon medium) of both of the Sunnyvale regulars pranking each other. The recorded revelations incited an argument that would require a three-round contest to solve, and one which would ultimately decide which of them would be evicted from the park for good. There would be a burger-eating contest, a “ball-off”—officially sanctioned by the International Federation Of Voluntary Scrotal Compression—and a round of “Sunnyvale Feud,” complete with audience volunteers. Though the last of those activities occupied a large portion of the show, most in attendance seemed to enjoy the greasy game show, including those on stage. Partway through the Family Feud tribute, a random audience member walked on stage and was immediately kicked out (the first of three times it would happen during the show). Later, a minister who was partaking in the game said “Go Bears!” which resulted in a theater-wide chant of “Go Pack Go!” 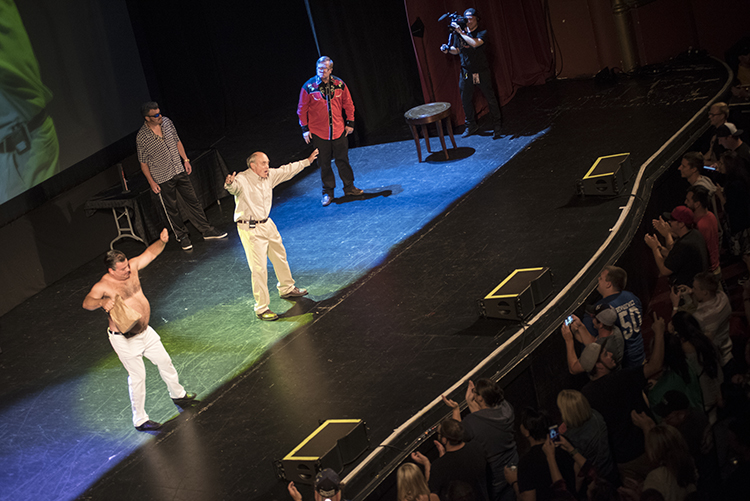 If you thought the games were through once the best of three competition had a clear victor, you’d be wrong. Following a Bubbles-led singalong of an original called “Liquor And Whores,” the latter half of the show brought on Bubbles Super Bingo, and prompted a 20-plus-minute intermission wherein the five stars went out to the theater’s lobby to sell bingo cards and conduct a meet and greet. Those who remained in the theater took in a photo collage of memorable Trailer Park Boys moments and ads for exclusive Swearnet content.

That industrious intermission wasn’t the only disappointing aspect of the night. Julian, who is usually the group’s vocal leader in the show itself (often to the characters’ detriment), was a largely passive participant in the live adaptation. He often looked on silently and stood a few steps back from Ricky, Randy, and the show’s indisputable host, Bubbles. During some segments, Julian even departed the stage without warning or reason. Mr. Lahey—easily the strongest actor of the bunch—was also underutilized. Sadly, his longest cameo came when he was passed out on stage for upwards of 15 minutes near the show’s conclusion.

Still, despite those issues and a climax that ultimately consisted of Bubbles drawing bingo numbers and the cast pulling up a few more audience members for a halfhearted game of charades, the vast majority of those in attendance seemed overjoyed with the “fucked up evening” and its level of interaction. And who could blame them? While it wasn’t a flawless live show adaptation, the Trailer Park Boys gave Milwaukee what it wanted: Bubbles was the lovable leader who bestowed belly tickles (both figuratively and literally) and songs, Randy inhaled a cheeseburger and was friggin’ awesome, Ricky showed himself to be a virtuoso of volatility, and Lahey’s drunk act kept things interesting.

Over the course of nearly two and a half hours (including the lengthy intermission), the iconic Canadian comedy troupe not only brought the cult classic show to Milwaukee, they made Milwaukee part of it. Depending on where Riverside patrons stood on audience participation and games, the end product was either decent or, to take a term from the Trailer Park Boys’ lexicon, deeeecent. Just as they do in the beloved program, the cast did whatever they wanted Friday night and, for the most part, it paid off.