In 2013, Milwaukee author, musician, activist, and carpenter Adam Michael Krause wrote an essay entitled The Revolution Will Be Hilarious. The 40-some-page pamphlet detailed society’s need to expand its collective worldview, and posited conventions of comedy—when dissected and used as a metaphor—could be used as a tool to improve one’s understanding of his or her fellow man. In 2016, he self-published a 27-page pamphlet called The End Is Near, which ominously outlined the ongoing collapse of our environment. Today, with the winds of American revolution blowing stronger than they have in decades and environmental devastation accelerating at an especially alarming clip, Kruase’s messages are more accurate and more important than ever before.

Krause’s forthcoming book The Revolution Will Be Hilarious & Other Essays features extended and re-written versions of those two pamphlets, as well as two more essays and an election-centered afterword. Prior to a January 27 Voyageur Book Shop reading and before Norway-based New Compass Press releases the book in February, Milwaukee Record spoke to Krause about the process of reworking past pieces, what can be done to stave off the end of existence, and the importance of offline activism.

Milwaukee Record: The book originated from a shorter pamphlet you wrote that you were asked to extend and add to?

Adam Michael Krause: These same guys did a pamphlet series, and in their series they did The Revolution Will Be Hilarious. By itself, it types up to like 42 pages. They asked if I would make The Revolution Will Be Hilarious & Other Essays so they could take the pamphlet out of print and make the longer one. I was like “No.” It was published in 2013 and the prose style I used, when looking back on the original, I was like “Why did I write like that?” I think that I had read too much David Foster Wallace or something and I was trying to get quirky phrasing in and stuff. Since then, I’ve really toned things down and learned to comprise the absolutely shortest possible sentence to get you from point A to point B. I’ve striven for and kind of achieved the great deal of compression.

It was kind of supposed to be entertaining and funny, but political. Since then, everything I’ve written has been about the environment and terrifying with really short sentences. You can’t republish this essay, and then after it have five things that sound nothing like and have totally different subject matter. My initial response was to let it go out of print and write a new book in my newer style.

MR: It seems like it’d be more daunting to recreate and to expand upon, while writing in an entirely new way.

AMK: I started rewriting it as an experiment by changing tenses to make it match the way I write now, taking out some of the things that are really dated, and updating the terminology. Then I put in new thoughts. I cut about 3,000 words out and added another 6,000. Once I did that, I started looking at the things I was working on and things I’ve published in the interim and thought “This actually makes sense. You could make a book out of this.”

MR: The book begins at the ending. It starts with an essay about the end being imminent. It seems like you say the collapse is already underway, so what can be done? Through humor you gain understanding and new thoughts are invited in.

AMK: I’m more using humor not as “we need to be funnier” so much as saying we need to think more openly and less stuck in closed off, Sheriff Clarke-style world views. Understand widely, travel widely, read widely, and be able to interact with various groups of people. How do you learn to do that in a world where people are very ready to push other world views out and insist on their own. It’s not so much “be funnier,” but I think the main thesis of the book is more like “Here’s how comedy works. Now that you can see that as a metaphor, here’s how you should try to go about interacting with the world.”

MR: In order to do that, you use the work of musicians, playwrights, comedians, activists, and a number of different sources. You have a Richard Pryor reference a dozen pages from a Shaker hymn, so readers of any interest or background have a number different access points that are all kind of tethered to these major concepts.

AMK: Yeah, I’m drawing from a wide variety of sources. We need to be able to synthesize ideas from all over the place, and then to also have a book that kind of exemplifies that in being able to quote Talking Heads and Shakespeare and Martin Luther King and activists. As a form, it kind of mirrors its own thesis in a way. I wasn’t trying to do that. It just happened.

MR: There’s a part that hit me, one that I’m noticing now in the wake of the election. You mention the “isolated angry” people that are alone. But by sharing a meme or having a “Read More” status on Facebook, we’re isolated, yet have evidence that you’re not the only one who feels this way. How do you put that into practice?

AMK: Going outside your comfort zone. I think getting off of your Facebook circle, going to public places, and breaking down that alone-ness to stand together is really important. The internet is helpful, but it can also be a hindrance in activism.

MR: There’s the immediate catharsis, but sometimes you’re just screaming into the void.

AMK: Yeah, you can imagine the void as this whole in the ground that you’re screaming into. Then there’s the next step of calling your senator, going to a protest, chaining yourself to a pipeline—whatever the hell you’re going to do—then finding other people, whether they’re like-minded or not like-minded, to do that with. I think there’s a lot of power in that.

MR: Other than the afterword, this urgent call to action was written before the Presidential Election. Now we’re at the beginning of what’s quickly seeming to be the least environmentally conscious administration in our lifetime. How does that impact the message? Does it accelerate the need and amplify your message?

AMK: I think the only thing I would change is that I would highlight the entire text and switch it to all caps. Maybe a bigger font.

Adam Michael Krause will read a new essay at Voyageur Book Shop on Friday, January 27. The Revolution Will Be Hilarious & Other Essays will be released by New Compass Press in February. Advance copies will be available at Friday’s event. 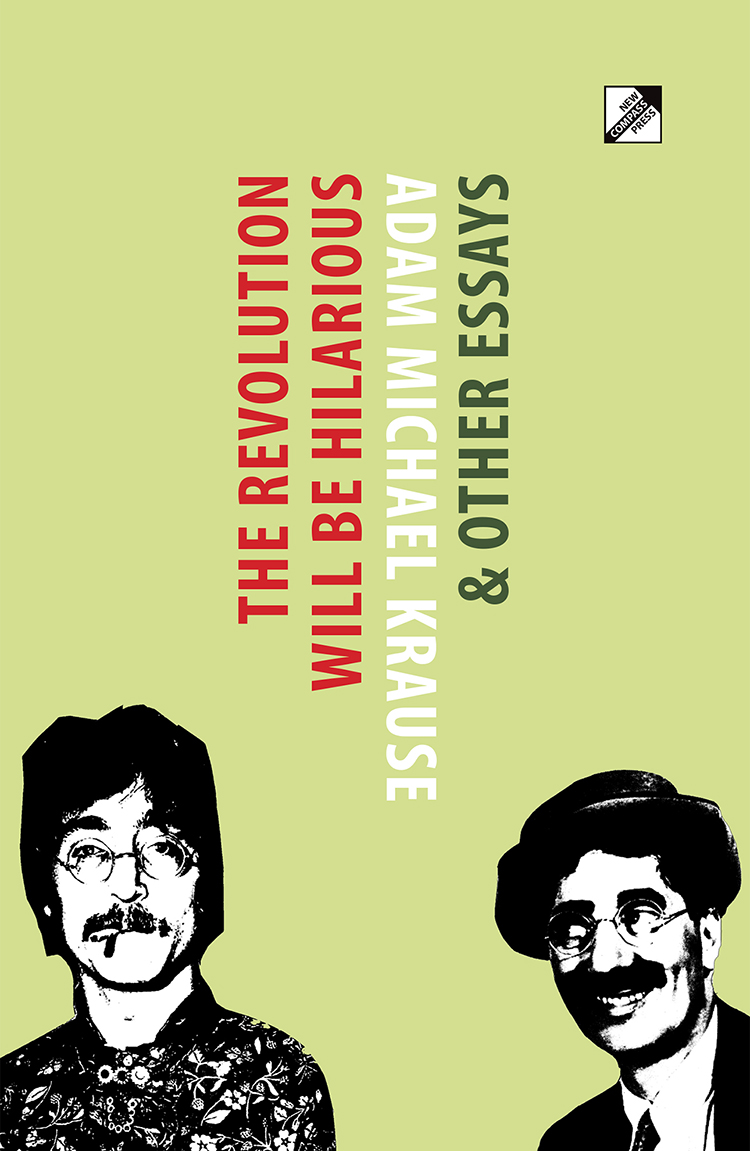