If you happen to glance up at the north side of the Colby Abbot building (759 N. Milwaukee St.) in downtown Milwaukee, you’ll see the city’s latest mural. But it’s not just any mural—”Voting Rights Are Human Rights” is the work of artist Shepard Fairey, best known for his Barack Obama “Hope” poster.

But the 7,400-square-foot “Voting Rights” mural isn’t just any Shepard Fairey mural, either. Fairey’s central image is joined by additional imagery from five Wisconsin artists: Tom Jones, Dyani White Hawk, Tyanna Buie, Niki Johnson, and Claudio Martinez. When complete (the platform with the “Use Your Voice” banner will obviously be taken down), the pieces will form a striking and impressive addition to Milwaukee’s downtown skyline—albeit an addition that is best seen from the top floors of nearby parking structures. 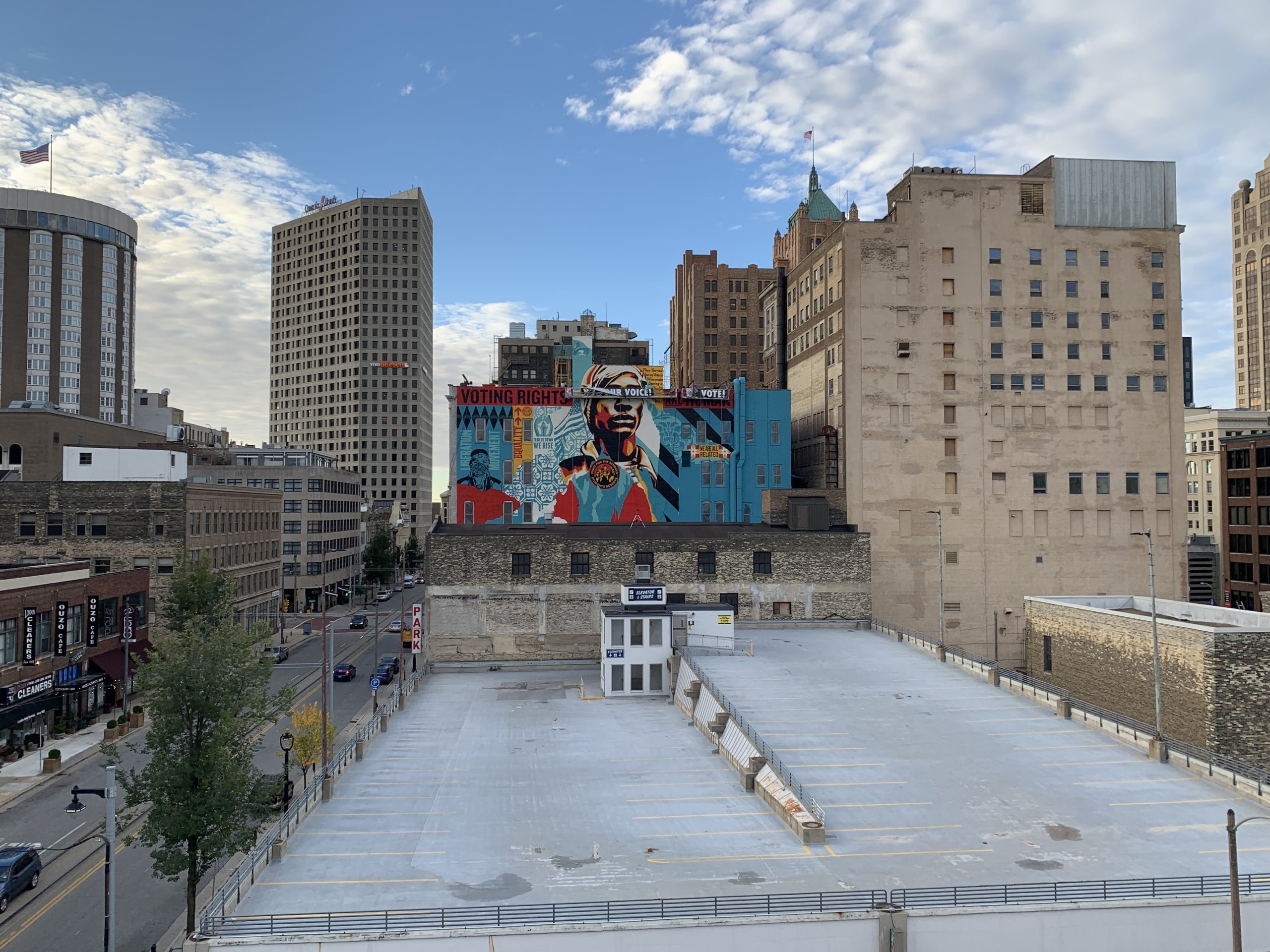 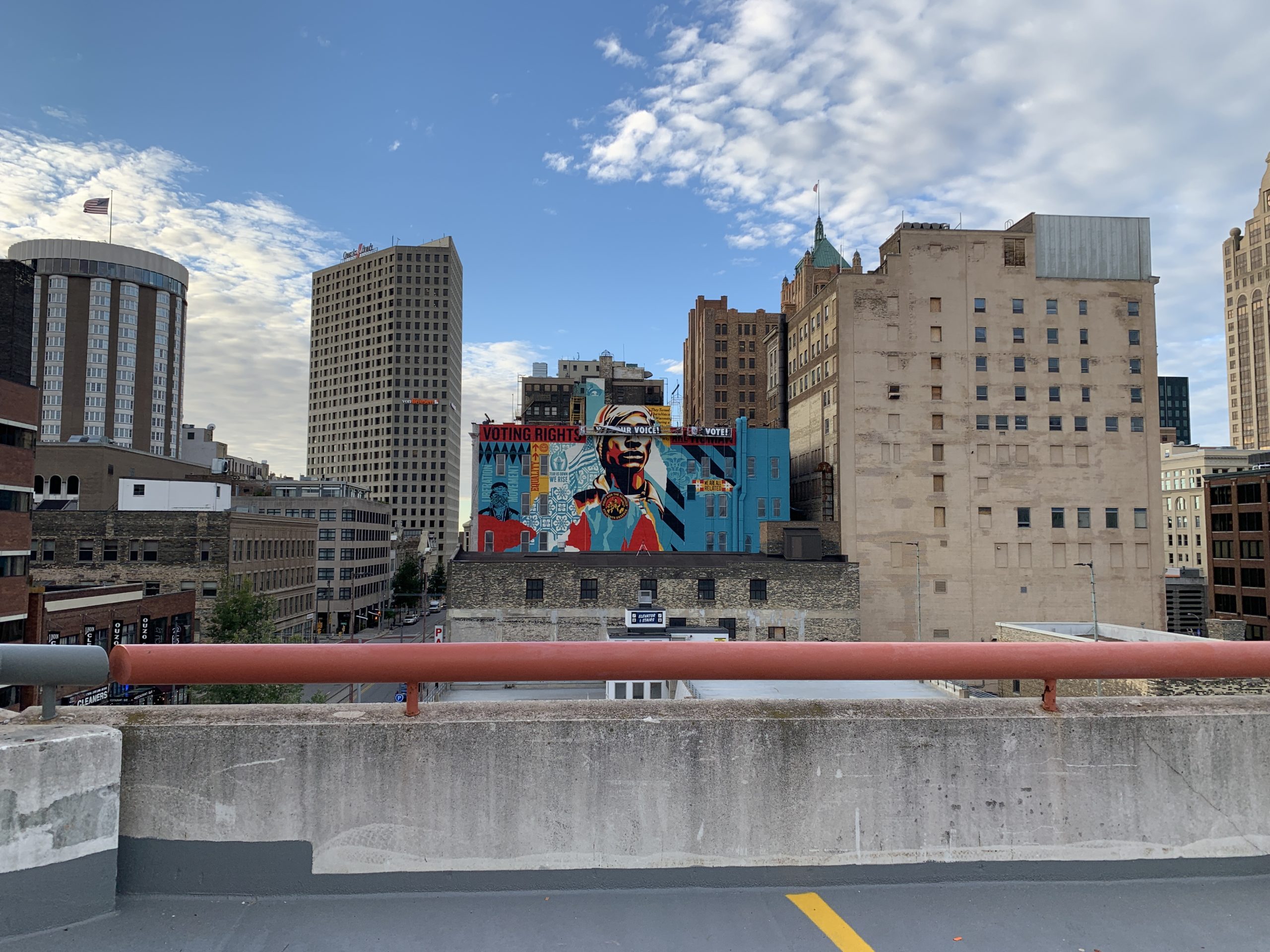 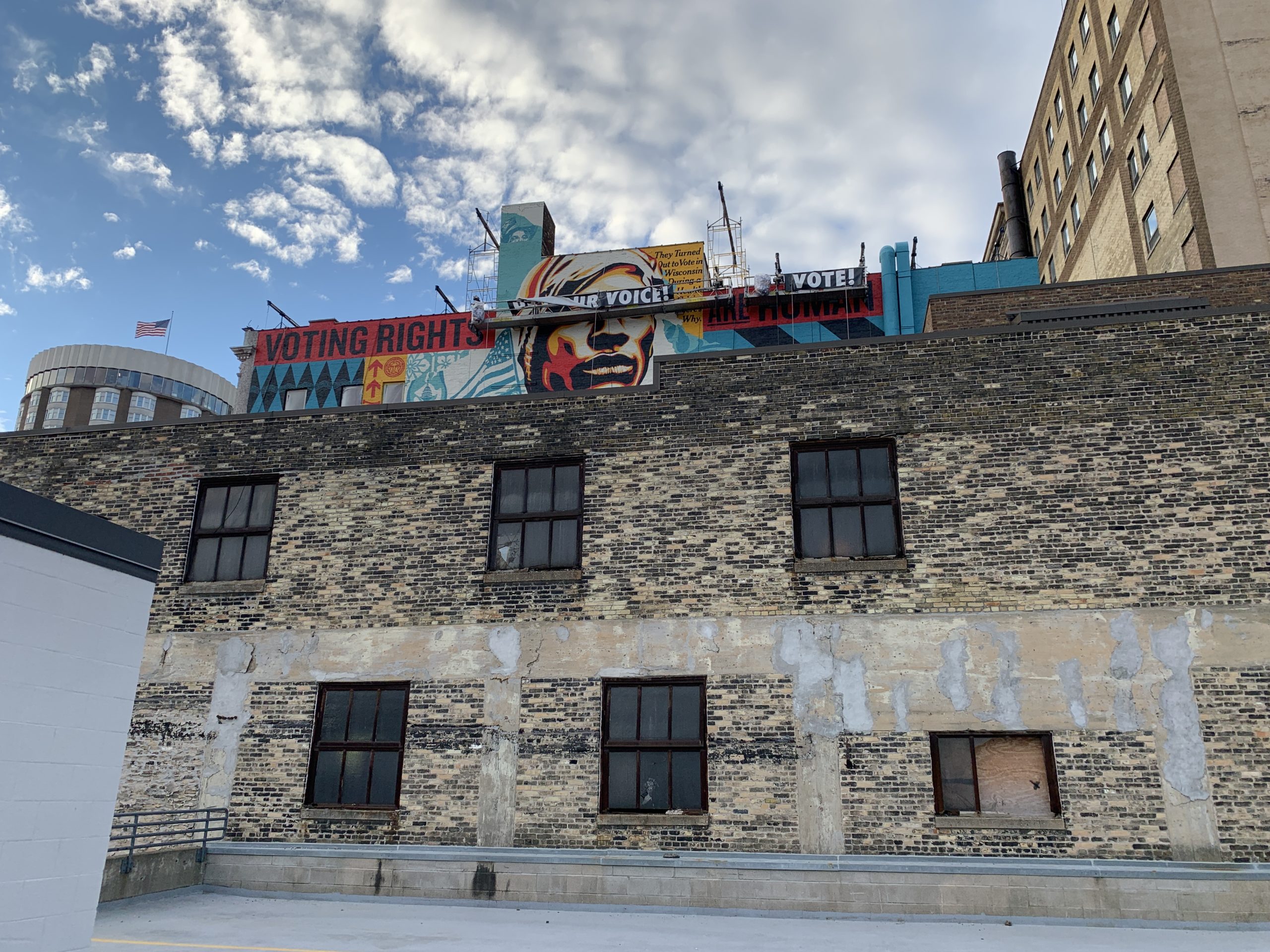 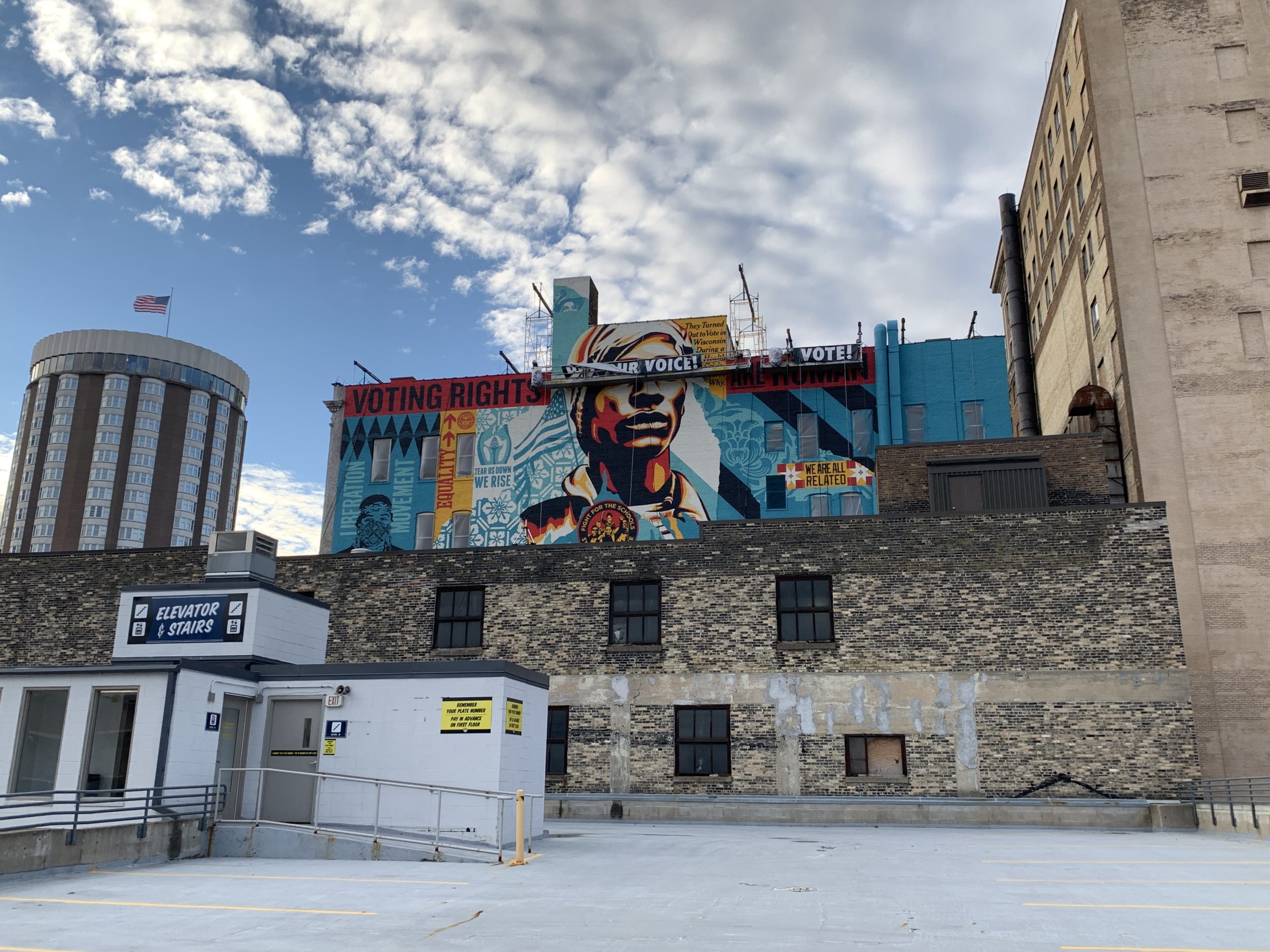 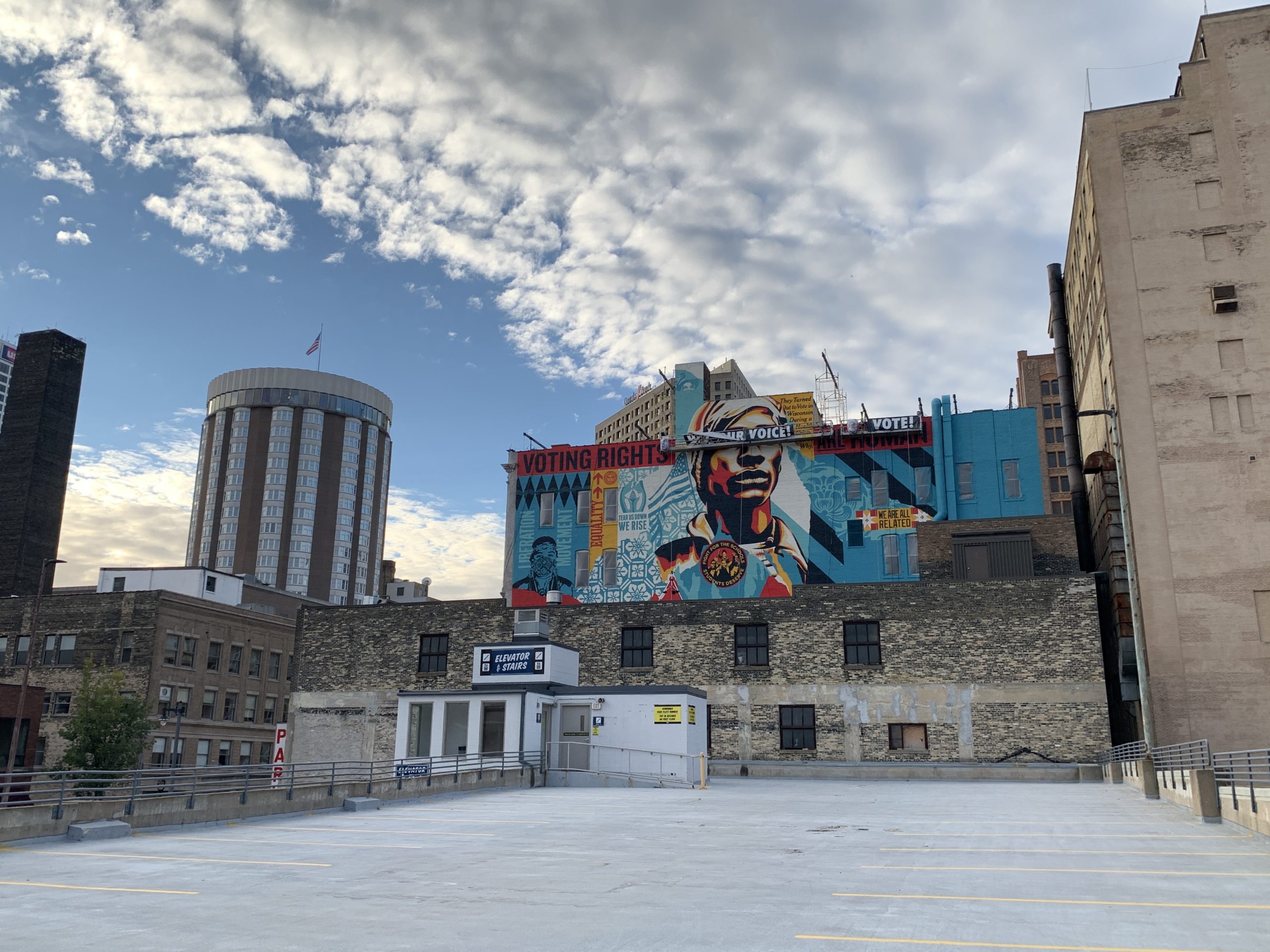 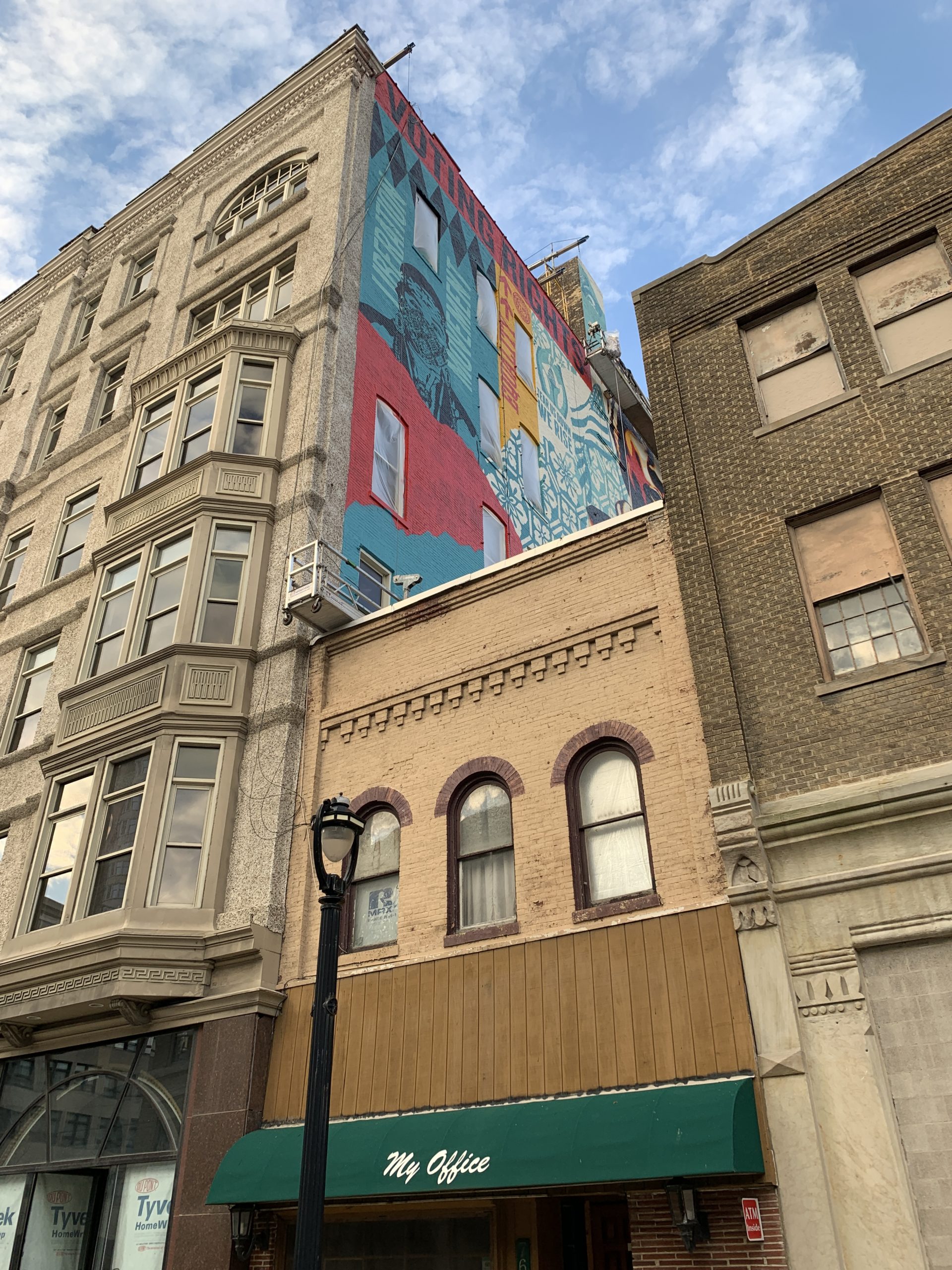 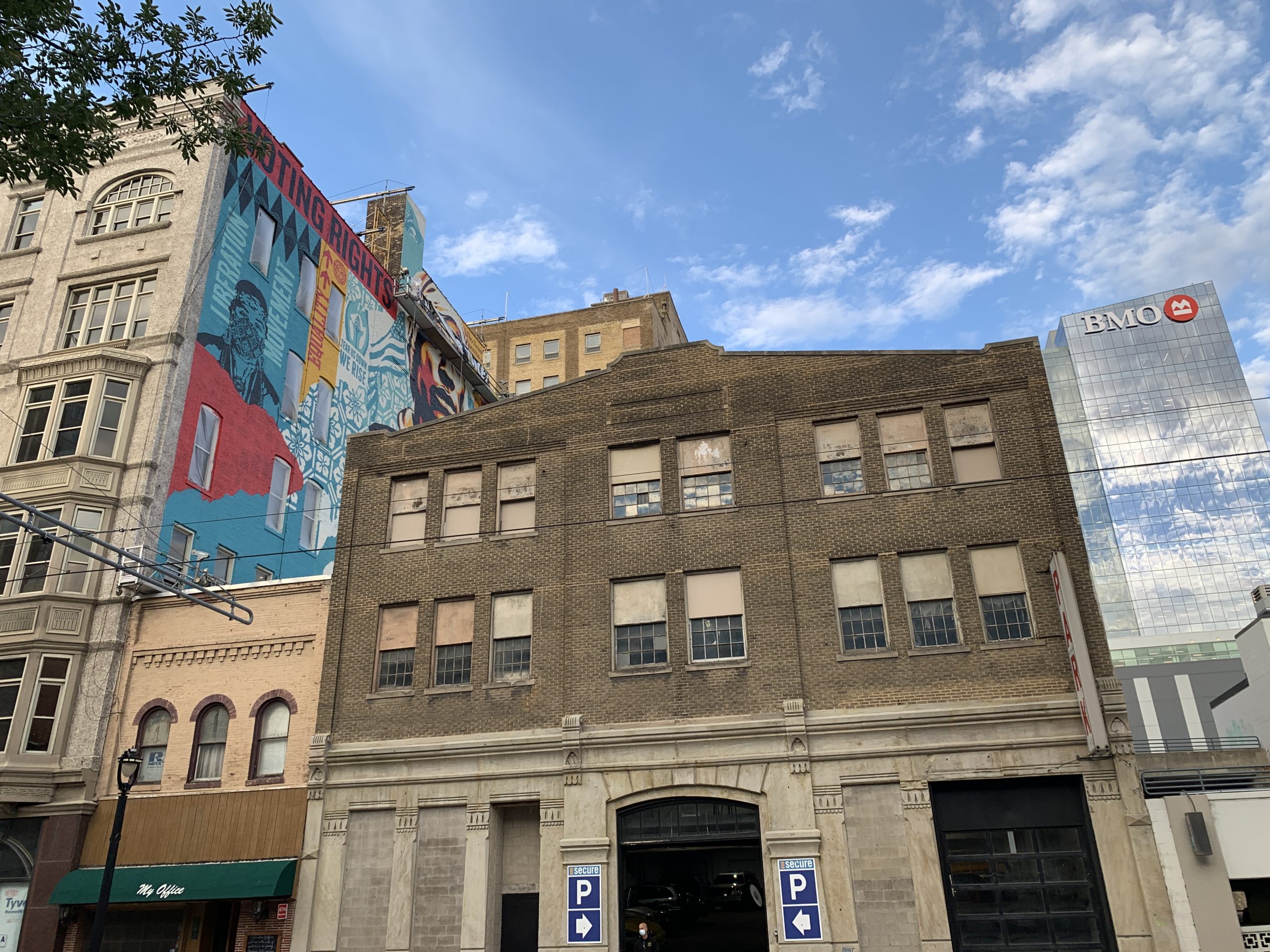 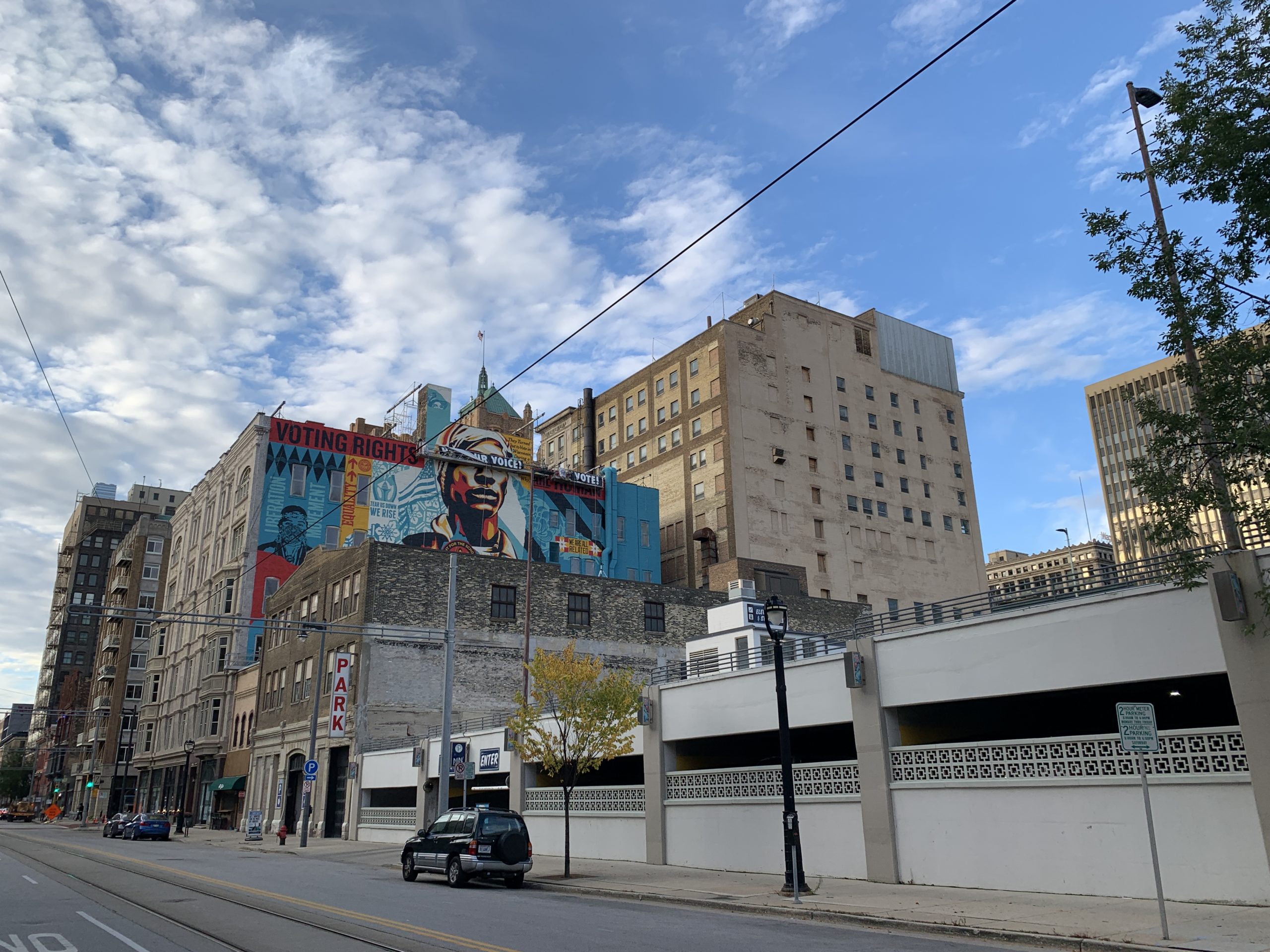 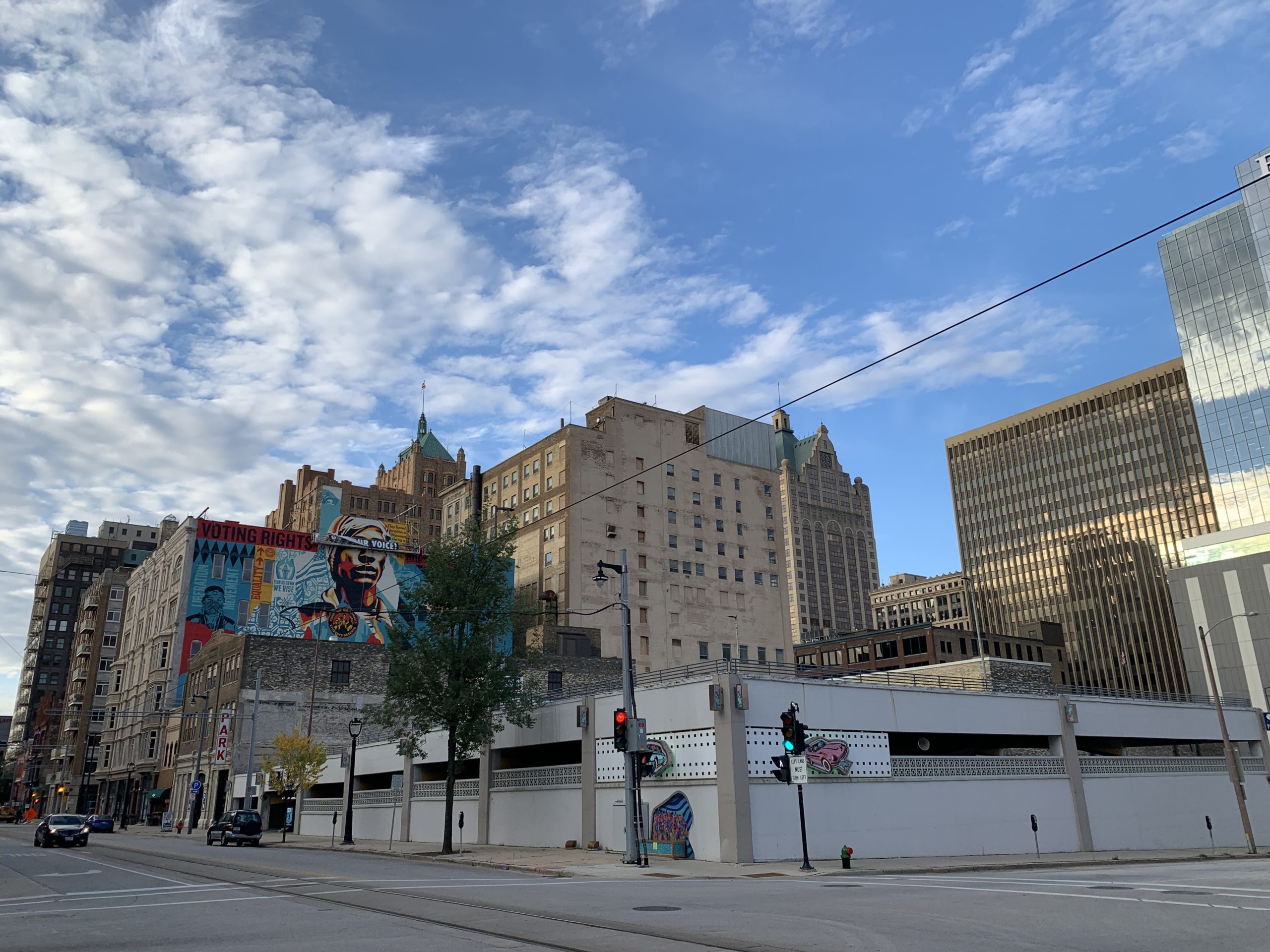 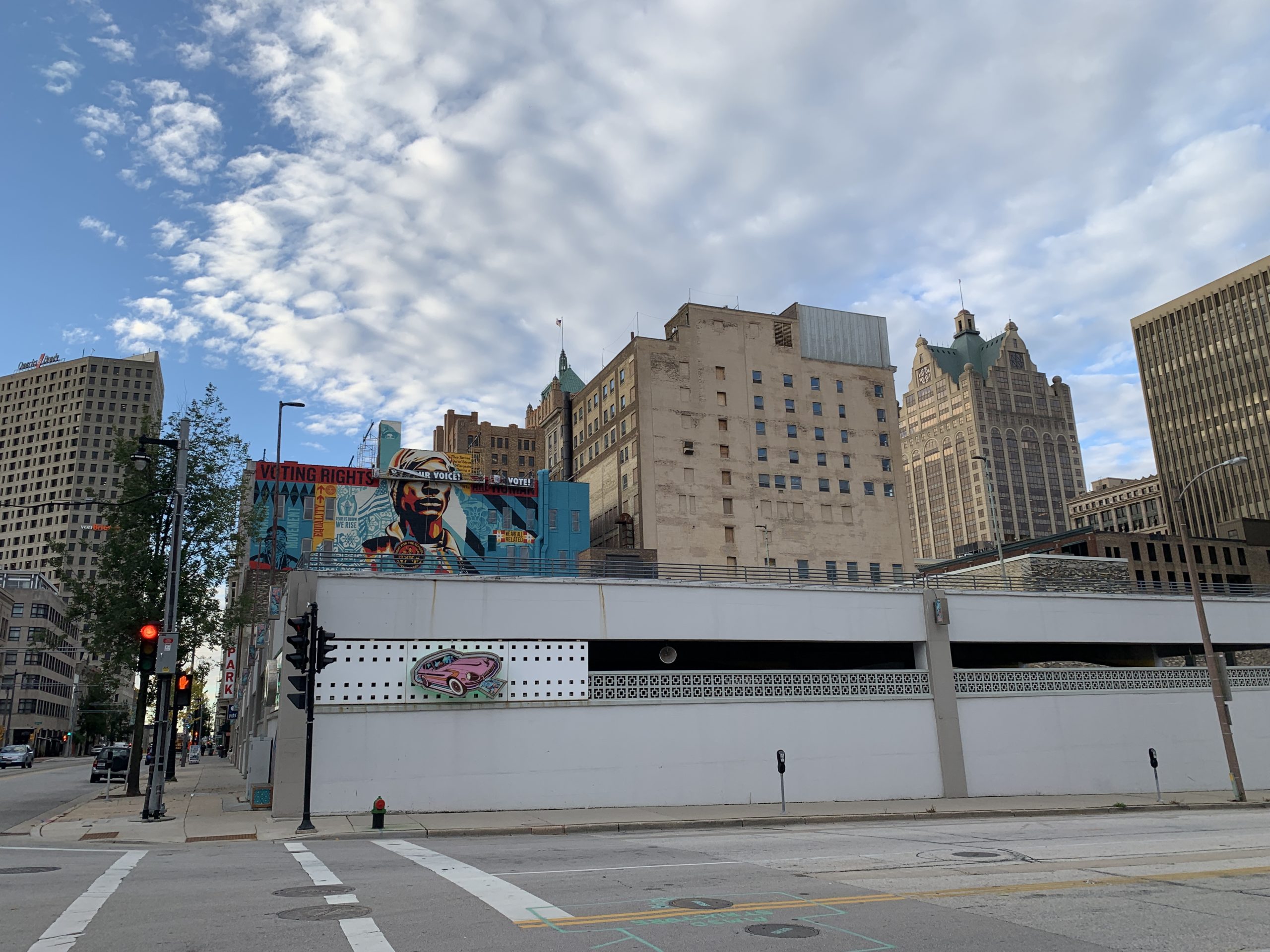 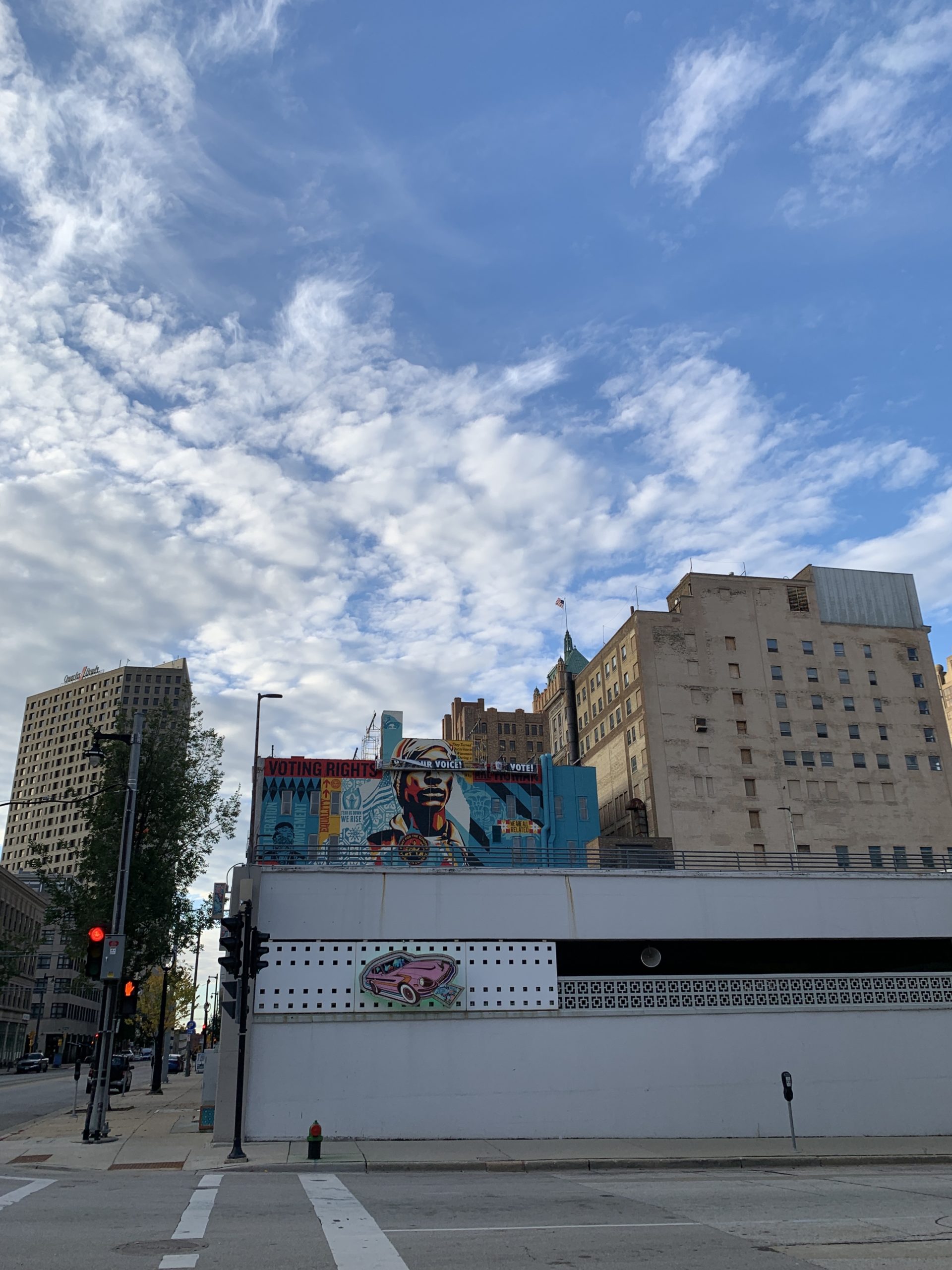 “We are facing voter suppression in many places in the nation, but I especially wanted to address that issue with my mural in Wisconsin since voter suppression has been such a problem in the state,” Fairey says in a press release last week.

Both the Railway Exchange Building and the Colby Abbot building are owned by Patti Keating Kahn and husband Chuck Kahn.

The initial mural was met with grassroots opposition, too. A group of local artists, musicians, and activists took issue with the mural’s lack of inclusivity and questions of appropriation.

“If the Voting Rights are Human Rights image is supposed to be supportive of voting rights,” read a letter from the group, “particularly with respect to Black, Indigenous and People of Color (BIPOC), it seems incongruous that the development and consultation of this project lacks sufficient BIPOC leadership.”

The new mural seems to address at least some of those concerns. “Through a process of conversation and sharing of design drafts, Wisconsin artists Tom Jones, Dyani White Hawk, Tyanna Buie, Niki Johnson and Claudio Martinez collaborated with Fairey to incorporate their artworks into a single cohesive mural,” reads a press release.

The central image in this mural will feature a portrait of an African American man looking skyward, surrounded by artwork and imagery provided by five Wisconsin artists. Through a process of conversation and sharing of design drafts, Wisconsin artists Tom Jones, Dyani White Hawk, Tyanna Buie, Niki Johnson and Claudio Martinez collaborated with Fairey to incorporate their artworks into a single cohesive mural. “The issues of health and voting for people of color are synonymous,” says Tom Jones. “We must not be complacent in these matters. Going to the polls to have our voices heard enacts positive changes for each of our communities and ripples across the United States.”

The original photograph that the central portrait is based on was captured during a civil rights march in the mid-1960’s by photographer Steve Schapiro. Fairey met Schapiro at the opening of The Legacy Museum: From Enslavement to Mass Incarceration in Montgomery, Alabama. Fairey recalls, “As I looked through his numerous beautiful and powerful photos, we discussed the possibility of collaborating on the spot.” A firm believer in the importance of collaboration and alliance, Fairey has spent the last thirty years working with other artists and activists in the fight against social injustice.

The “Voting Rights are Human Rights” mural was originally part of a national tour to support the 2020 election season. In a financial reaction to the COVID pandemic, the largest corporate sponsor had to withdraw, cancelling the tour; however, Fairey remained committed to installing the Milwaukee mural. Fairey states, “The impetus for this project was rooted in activism and advocacy. Although the original pre-COVID funding of the project was stripped away due to the pandemic, it remains a goal of mine to work within the community of Milwaukee to lift up the urgent message of democracy and voting. We were able to get commitments for funding to cover the costs of travel and materials needed. I will donate my art, time and pay collaborators and my art team to work with me on painting the piece.”

Current community efforts surrounding the project involve seeking out potential alignment with non-profit organizations, whose missions also involve fighting voter suppression and bringing out the vote for November’s presidential election. This includes working with the Milwaukee Bucks, in a further push to use the power of their respective platforms to make a difference in the effort to encourage voting.

“We are facing voter suppression in many places in the nation, but I especially wanted to address that issue with my mural in Wisconsin since voter suppression has been such a problem in the state,” says Fairey.

Installation of “Voting Rights Are Human Rights” begins today, Tuesday, October 6th, with wall preparation and priming. Obey Giant will begin painting the mural’s imagery October 10th. Once finished the mural will measure approximately 7400 square feet, and will extend vertically from the third to the sixth floors of the Colby Abbot building, across the width of the north-facing wall. The mural is part of the renaissance of the Colby Abbot Building which is being rebuilt following a devastating fire earlier this year.

Sponsors of this project include the Black Box Fund and three local anonymous donors. Raised funds are being used to rent access equipment, pay for wall preparation, cover the cost of materials and provide accommodations for Fairey and his staff during their time in Milwaukee. Fairey is paying his staff and the collaborating artists. He is not receiving payment for his work.

“Art and the creative economy build a sense of community and togetherness that our society so deeply needs right now. We in Wisconsin already know Milwaukee is a gem, but Shepard Fairey’s mural may very well transcend Milwaukee, putting us on the map right along with the Smithsonian, the Museum of Modern Art in New York and the National Portrait Gallery— prominent places that have already featured Mr. Fairey’s work,” says Sara Meaney, Secretary of Wisconsin Tourism for Governor Evers’ office.