Most fans of the Green and Gold probably aren’t in a hurry to look back at last season. However, one of the few bright spots (other than Davante Adams, the emergence of Aaron Jones, and doing away with Mike McCarthy) in a dismal 6-9-1 campaign was the second season of the Milwaukee Record Halftime Show. Each week, we booked a different musical project to play an abbreviated set at the Cactus Club between the second and third quarters of all Green Bay games. Following an especially long offseason, we’re proud to announce the Milwaukee Record Halftime Show concert series is coming back bigger, stronger, and in the best shape of its life for a third year at Cactus Club.

Like last year, our friends at Miller High Life will sponsor our football-focused festivities, meaning fans can enjoy “The Champagne Of Beers” for $2.50 a bottle or $10 for a bucket of five beers all game long. Bloody Marys will also be on special for $6. As always, there will some complimentary snacks on hand (feel free to bring food to share! We’d really appreciate it!), as well as the possibility of food trucks popping by for a few games. Need more? Well, there will also be bleacher seating and the opportunity to watch Aaron Rodgers play football on two televisions. We’ve also heard rumblings about a new projector screen in Cactus Club’s back room. And, yes, there will be touchdown shots.

Most importantly, the previous two iterations, we’ve assembled a stacked roster of 16 projects to provide FREE (21+) halftime entertainment. Moreover, band members (or other hand-selected people) will serve as DJs before the game and during commercials. The series will kick off with a Thursday night performance by Surgeons In Heat, and will continue on (at least) until the regular season finale by Future Plans. Along the way, a variety of acts—including Genesis Renji, Magnetic Minds, Fuzzysurf, SistaStrings, Fox Face, King Eye & The Squirts, and an extra special December 15 performance by the Green Day Packers—will take the stage at Cactus Club.

Football is coming back and so is the Milwaukee Record Halftime Show! It’s going to be awesome. Here’s the full lineup (game times subject to change): 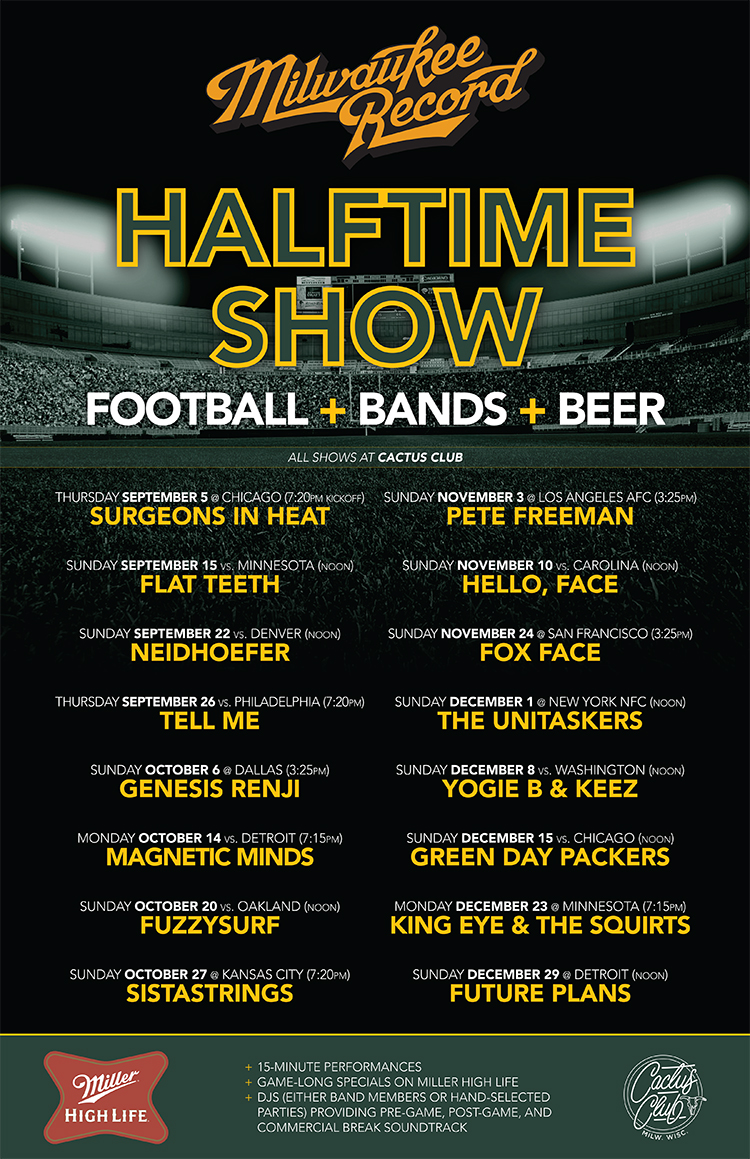