Last year’s inaugural Bandsketball tournament brought a wide variety of Milwaukee bands and rappers—32 in total—to the courts at the corner of Center and Fratney streets in Riverwest to determine which group of Milwaukee musicians was the best at basketball. We witnessed most of year one, which culminated in SAFS Crew besting WebsterX and company in the finals. After the three-on-three tourney’s successful and fun first year, co-organizers Johanna Rose (New Boyz Club) and Alex Heaton (Ugly Brothers, Thurman Merman) decided to take on the task of bringing Bandsketball MKE back for year two.

“Last year was a blast. The best thing about last year was seeing people hang out before or after their games. Musicians from all genres were able to meet each other and learn about bands in Milwaukee they had no idea existed,” Rose says. “It helped build local support for local music. Milwaukee line-ups are changing and bills are more eclectic. We hope Bandsketball can help continue this trend.”

The four-round competition will take place over the course of four Saturdays between July 11 and August 1. Every round’s games start at noon and are best two of three games. The public is encouraged to come watch. Like last year, Bandsketball 2015 features artists from across the musical spectrum, including rappers, indie rock projects, folk bands, punk acts, and whatever Rio Turbo is. About half of this year’s competitors also partook in the first edition. Organizers say they wanted to reward bands who took a gamble on the unproven event.

Here’s who will be playing Bandsketball 2015 (minus two TBA acts who will be announced soon). Check back in the coming weeks for the bracket and more specific times. 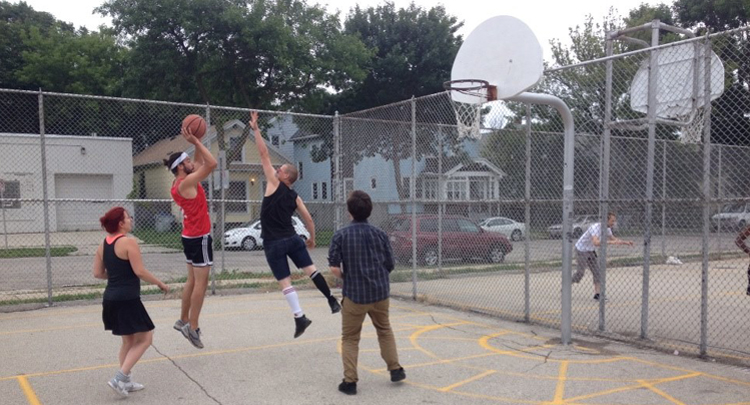