When it comes to music, the title of “best” is almost always subjective. Try as writers may to remain impartial, it’s only natural for at least some personal preference to trickle into record reviews and year-end rankings. Awards shows of all magnitude almost always devolve into Internet-based popularity contests, or voters selecting winners based on criteria that doesn’t always hinge on quality alone. Really, music—Milwaukee or otherwise—is such a vast and unregulated art form, nobody can confidently say for certain what stands out as the unabashed number one.

Beginning Sunday and running through day two of the semi-affiliated Breadfest, the inaugural Bandsketball tournament will pit a total of 32 bands and solo artists against one another with the clear intention of determining which is the undisputed best of the bunch…at playing basketball. Johannah Rose of The Calamity Janes hatched the idea for the tournament when she moved from Portland to Milwaukee. In her former city, she encountered a band that mounted a hoop on its tour van and challenged other bands to games at shows. That idea was eventually expanded into a full-fledged tournament known as “Rigsketball.” At least somewhat in that spirit, Bandsketball was born.

To help bring the idea that was Portland-proven, but still very ambitious to fruition, Rose—whose basketball career ended in seventh grade as a guard relegated to throw-in duty—sought assistance from friend, basketball nut, and former high school player Alex Heaton (of Ugly Brothers and Lousy Trouts). It turned out the former Marquette University High JV player and current rec leaguer harbored a similar athletic ambition, which he says was inspired by the NBA Jam-style interlude in the “Riverwestside Story” music video by The Fatty Acids and Sat. Nite Duets.


“We realized we knew enough bands between the both of us to have a small tournament,” Rose says. “Then it started growing as we were talking to more people.”

The hypothetical concept of a scene-wide basketball tournament quickly took shape, as acts from various corners of Milwaukee music agreed to take part in the three-on-three, first to 11 points, best two out of three, single elimination, half-court tourney on the courts of Center Street and Fratney Street in Riverwest.

“Basically, the goal is to get a bunch of bands from different types of music interacting,” Heaton says. “We tried to contact a lot of different styles of music.”

The competition brought out punk, folk, rock, and hip-hop outfits alike. The random seeding yielded some interesting opening round games. A few choice matchups feature Heaton’s Ugly Brothers taking on WebsterX (and two appointed subs), Soul Low playing Ladders, Rio Turbo battling Sat. Nite Duets, Absolutely clashing with Thriftones, No Brainer versus Platinum Boys, and Cave Wives butting heads with Rose and her Calamity Janes. Other notable Bandsketball entrants include WC Tank, Scrimshaw, Kane Place Record Club, Animals In Human Attire, and Antler House. Despite the volume of participants involved, Rose and Heaton admit the bracket is predominately composed of Riverwest acts. Of course, Heaton feels either of his teams have a good chance to win it all. Rose, on the other hand, feels the “young and spirited” men of Antler House could contend, as could No Brainer because “they’re all super tall.”

Compared to the level of interest, the prizes are fairly paltry. The top four finishers (if willing) will play a show together in the near future. Additionally, the co-organizers intend to buy trophies to distribute to top teams. However, the aim of Bandsketball isn’t award-based. Instead, it’s focused on the foundations of  having fun while strengthening the connections in the, at times, segmented Milwaukee music community.

“It would be nice if people started to mix, and get out into other types of music,” Heaton says. “The more exposure and the more influences you can get, the better the music will be.”

At the very least, Bandsketball will enable local performers to interact for a new reason, in an unconventional site, and with a different objective. Anybody is welcome and encouraged to cheer on their favorite Milwaukee musicians. Having seen a fairly similar affair unfold during her time in Oregon, Rose is confident Bandsketball 2014 will be worth the time, effort, and risk to make it happen. Even before the first tip off, the pair already intends to expand Bandsketball next year to bring in even more bands, and seek talent from a wider range of neighborhoods. That is, if the first one goes well.

“It’s hard to mess up getting together and playing basketball,” Heaton says. 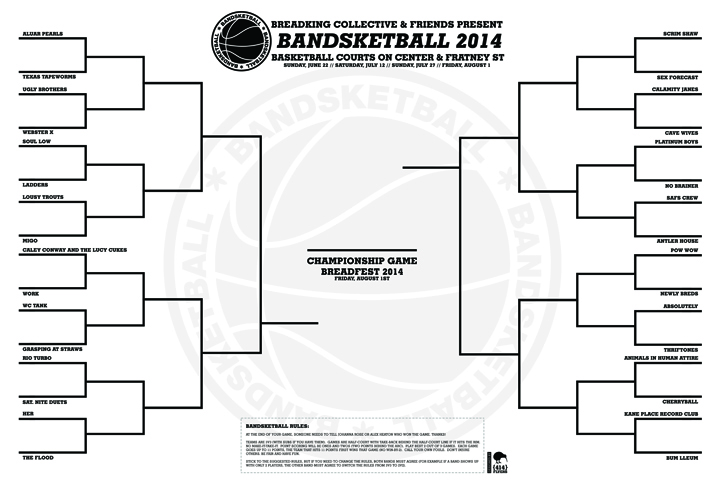