Last year, the inaugural Breadfest brazenly took on Summerfest and saw 21 bands that were either in the Breadking DIY music collective or just other Big Gig snubs take part in a two-day, six-venue festival in Riverwest. While Breadfest opted against competing with Summerfest again this time around, the upstart festival is back for year two, bigger, better and longer than ever.

After months of planning (and even convincing some bands to cancel prior engagements) the lineup for Breadfest 2014 is finally set. Last year’s fest leaned in a predominately punk, post-punk, and experimental direction. This time around, the lineup has expanded to bring in folk and hip-hop as well. In all, 49 acts will take to nine stages (including one outdoor) over the course of four days (July 31 to August 3). In addition to vaunted locals like The Fatty Acids, Soul Low, The Championship, Old Earth, WebsterX, and Paper Holland, acts like Chicago nine-piece The Island Of Misfit Toys, Lawrence Peters (Songs: Ohia, Magnolia Electric Company), and Eau Claire up-and-comers Softly, Dear will add some flare from elsewhere.

Along with help from other Breadking members, scene stalwart Myles Coyne put the massive Riverwest festival together.

“We’re trying to do it bigger,” Coyne says. “We’re just trying to show that even if it’s a DIY fest, kids can whip stuff together that can look just as professional as the bigger fests.”

Of the nine shows, three are free, and four are all-ages. Single-show passes are $6, one-day passes are $10, and festival-long passes are $25. Advanced $25 wristbands can be purchased HERE (first 50 orders come with a free sampler CD). The $6 and $10 wristbands will be available both online and at select Milwaukee locations soon.

Update: Weekend wristbands can also be purchased at Fuel Cafe, at The Exclusive Company (Farwell location).

(All shows listed in order from headliner to opener) 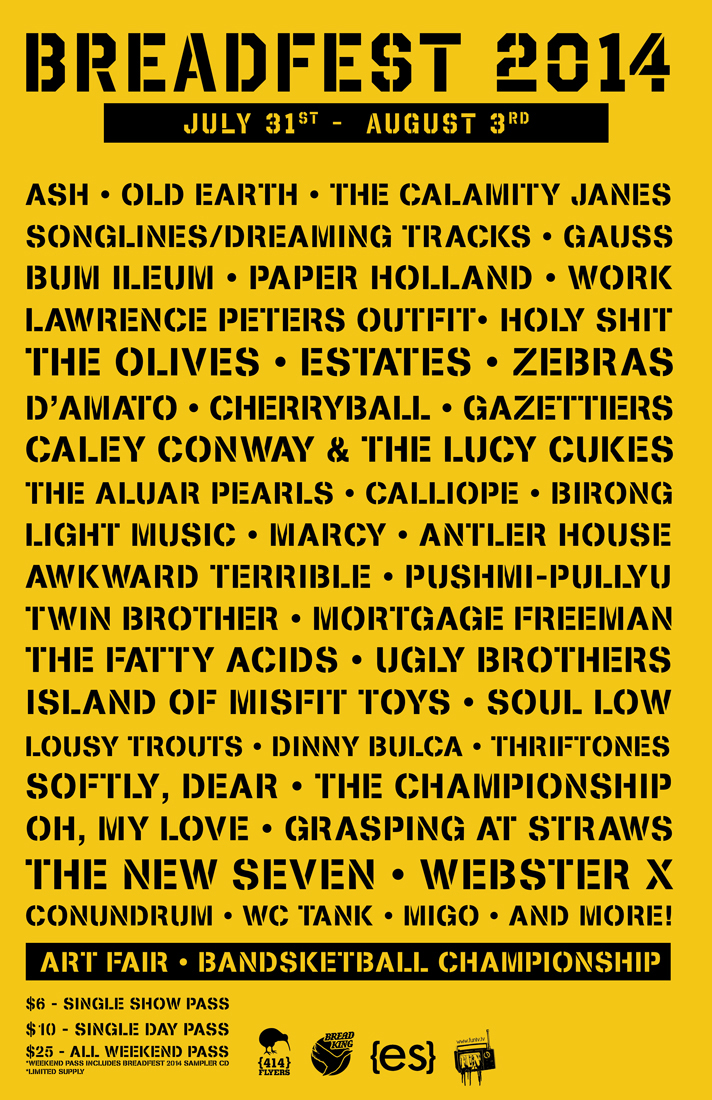